I was kind of referring to a scene in Ponyo but it's been so long I can't even remember if that's what she actually says, I have a feeling that it may have been "I want legs" and in true fyn style I am much too lazy busy to see if there's a clip on Youtube. 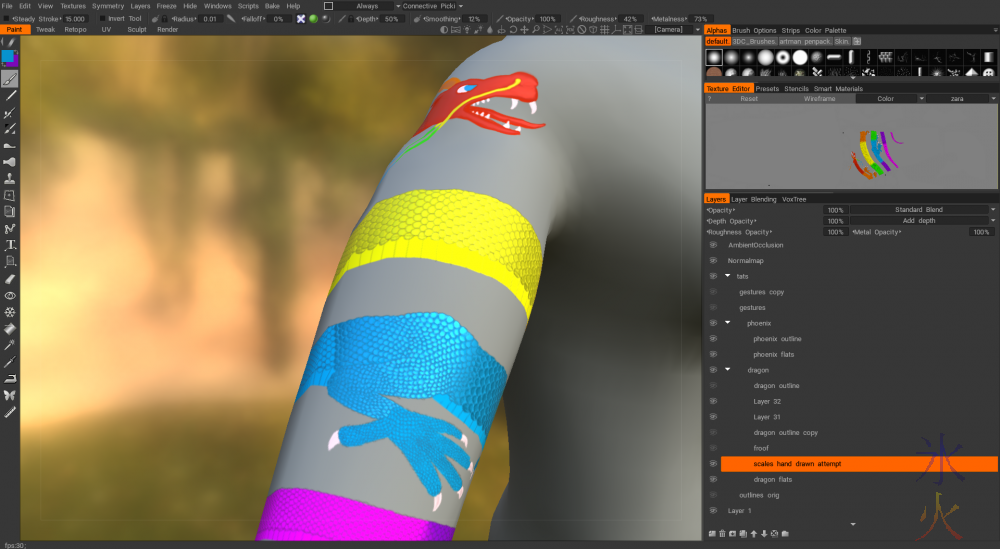 Made some pretty decent progress this week mostly because I've set two half-days of work (when I have to pick up 12yo from school so she gets to the early after school stuff on time) and also switched to hacking on AER stuff during the day and doing other work at night as I can usually steal some time during the day if we don't go out for whatever reason and we've been home quite a bit recently.  I also paused working on Witchies for a couple of days while I try to "catch up" on AER stuff (I'm not quite sure what I'm trying to catch up as this thing doesn't have a deadline, I think I've been working on it for so long I just desperately want to be much, much further along than I am).

I've been told I'm going a bit nuts with the attention to detail especially as there are no particularly closeup shots of the tattoos themselves planned (there are a couple of scenes where attention is drawn to them but I'm not planning to be zooming in on them at any point).

Was hoping to start cameo sketchies this weekend but today I ended up starting an almost deep clean of the house (not mopping even though the floors need a wash as the weather is not very conducive to floors drying in a timely fashion) and will likely just keep working on scales.  Maybe tomorrow if I'm not too tired from getting up earlier than I usually want (I am thoroughly not a morning person) because my daughter wants to cheer squad her friends who are badge testing.

And hopefully my brain has gotten back into gear to be able to hack on everything all at once again.