How to get an AER cameo character

It's not as fun as How to Train Your Dragon but probably a bit easier (for you anyway ;D).

What's this all about then?

The idea stemmed from aeons ago, as I thought it might be fun to slot in some friends as cameos either floating around in the background or as friends/associates of the main characters.

Then I thought well I have to build background characters anyway, may as well expand it out as making characters for people is much more fun than generating randoms, so I made it a Patreon tier.  Then I quit Patreon.

Nobody cares, how do we get a character?

If you interact with me regularly on hive and/or associated Discords (linked at the bottom of my hive posts, where "interacting" means a lot of happy comments back and forth not "hi" every once in a blue moon) then all you have to do is ask.  Leave a comment on a post or ping me on Discord (in a channel is best as I think we need to be friends for messages and I don't accept friend requests from people I haven't spoken to extensively) or send me a message on dA, I'm easy.

Alternately you can use the "cameo" commission on ko-fi (which is set to the same price as the default coffee) or throw something in the Paypal.

Cool, what kind of characters can we have?

Many and varied! Has to be either self-insert or your own characters though, no fanstuff as I'll probably get in trouble :) Following are the 3d bases I sculpt from plus examples of characters in that classification (both canon and cameo). Usually has features from other animals (most notably ears, tails and fur), though some may look exactly like a Base and seem to have a superpower (such as eyesight and/or hearing that's well above average) or just have something slightly unusual about them (like elfin ears, slightly larger eyes, slightly longer digits etc).  On a pure technicality all the non-Base are Evolved but "Evolved" ended up being the catchall for anyone not Flier or Mer. 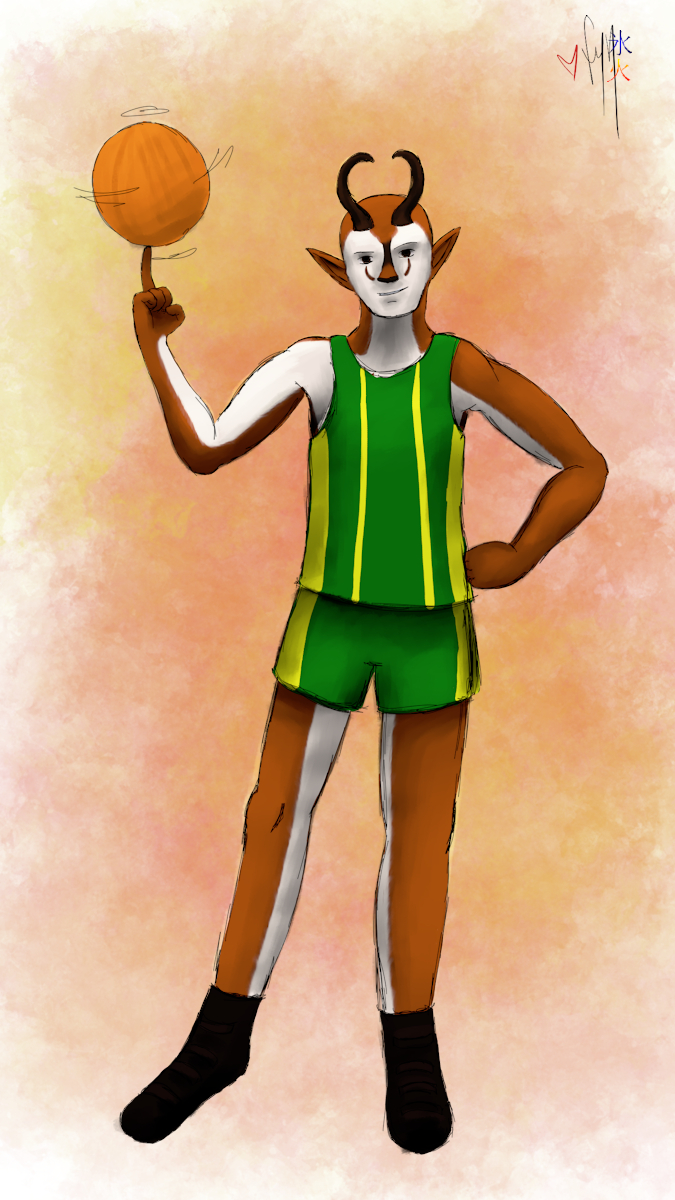 Usually (but don't always) have legs and can traipse about on land.  They don't do very well in hot/dry climates unless they can be kept at least cool.  Exceptionally good swimmers that can hold their breath for ridiculously long periods of time and see really well in the water, pretty much like dolphins and whales (incidentally they can detect and hit the frequencies of dolphin and whale song so can learn to communicate with them). 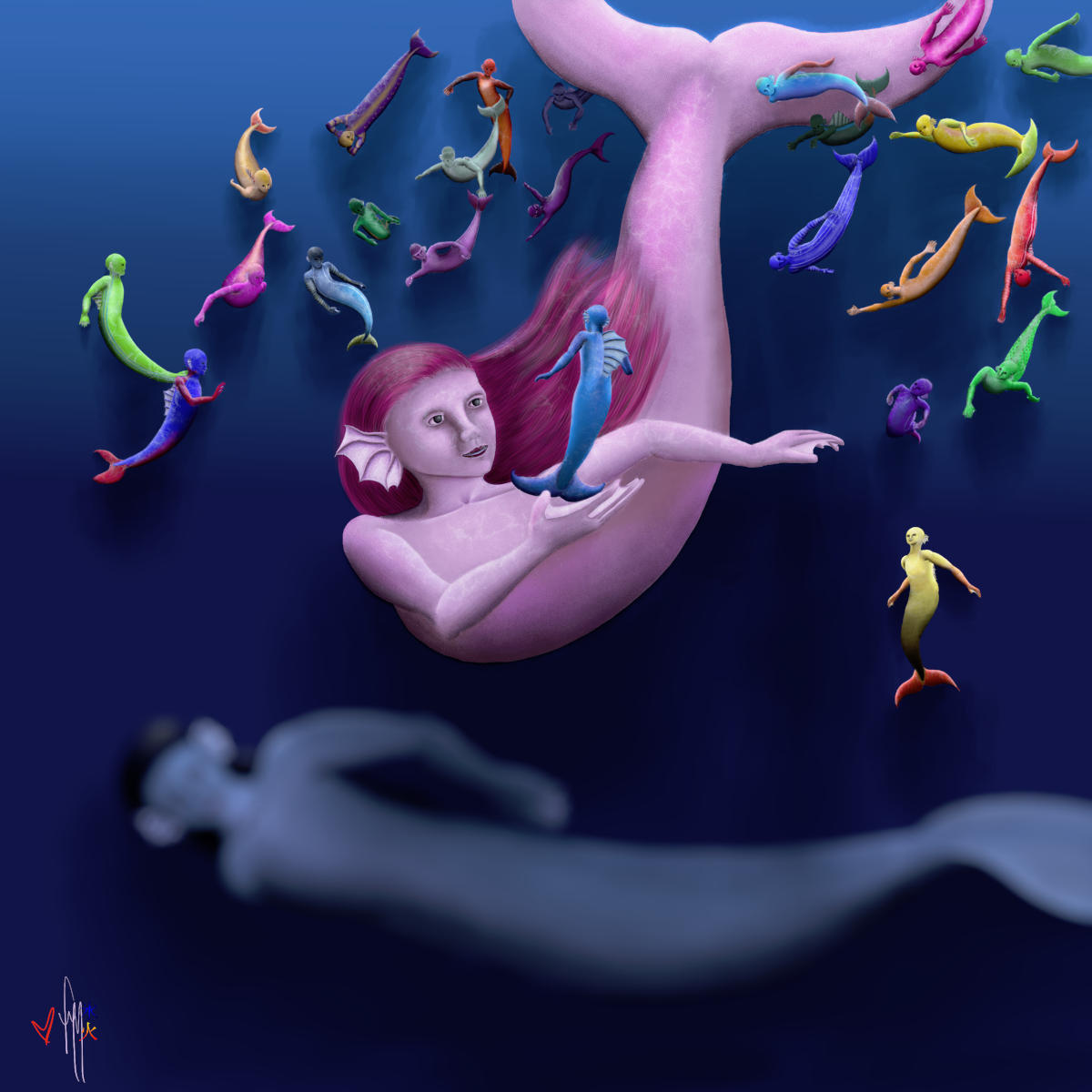 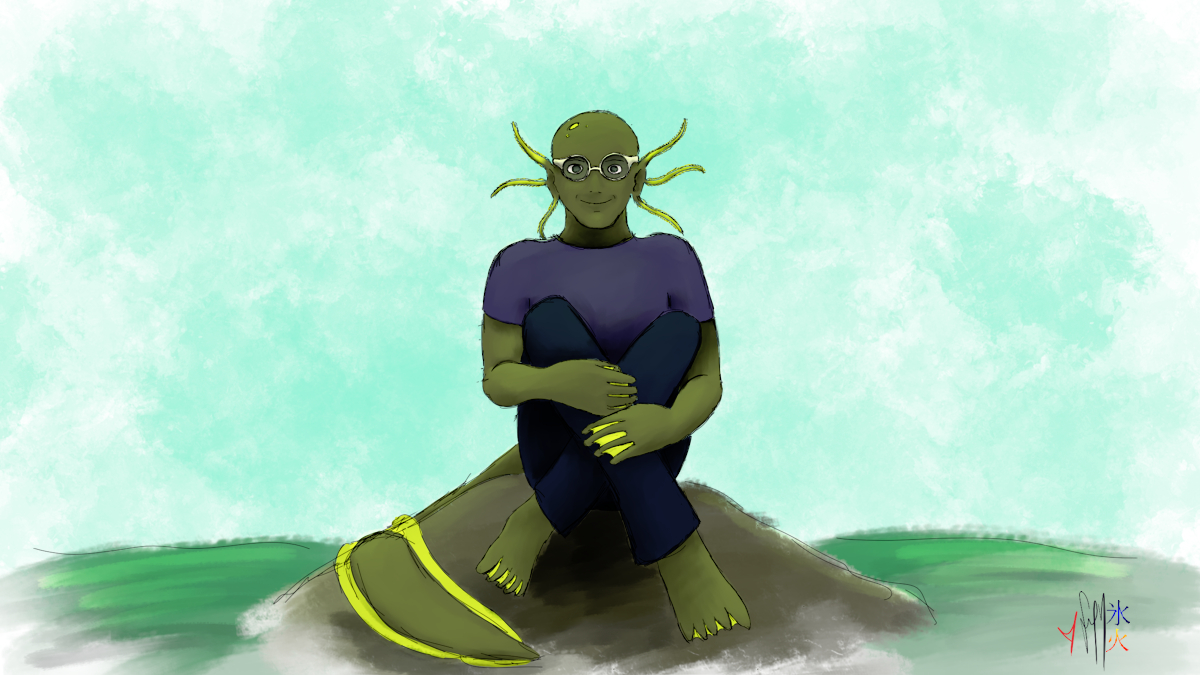 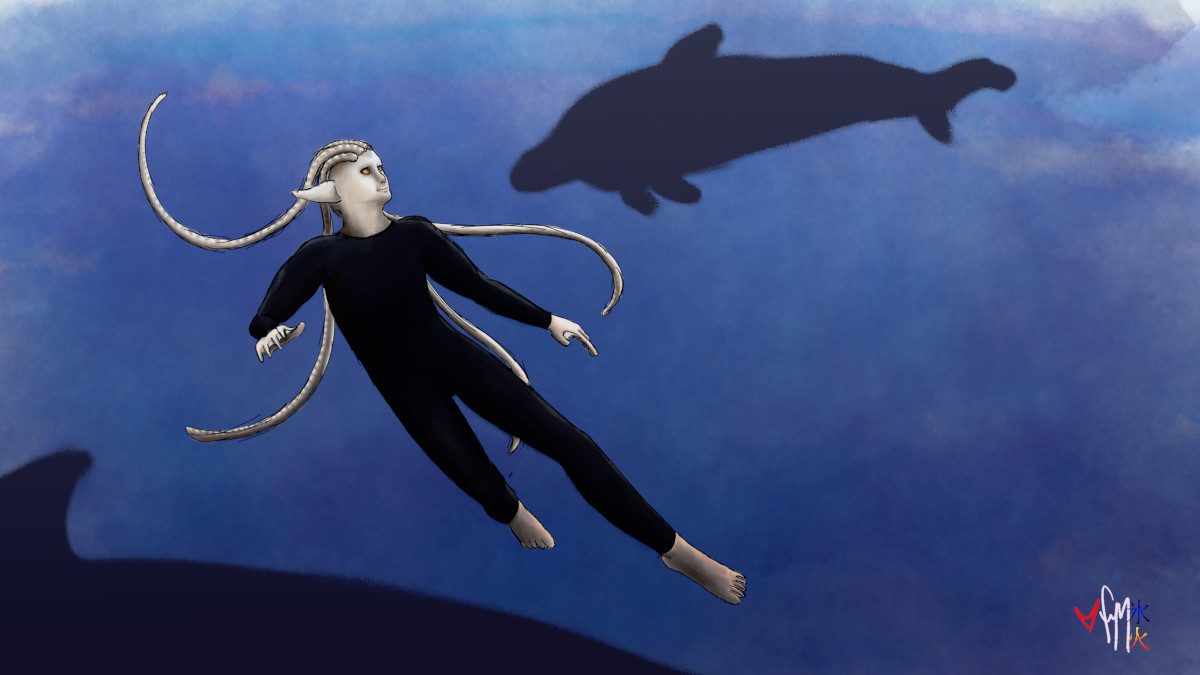 Have gills  and can't breathe air.  Have fish or eel tails or octopus/squid tentacles.  We're also probably highly unlikely to see many if any in the near future as my current story blocks are all terrestrial.  If I ever manage to get rich and develop this thing full time, there are some prehistory stories that feature them. Bird people with feathered wings and tails.  They also have two decorative head feathers and a crest that may be comprised of finer feathers that somewhat resemble the hair or very definite feathers. 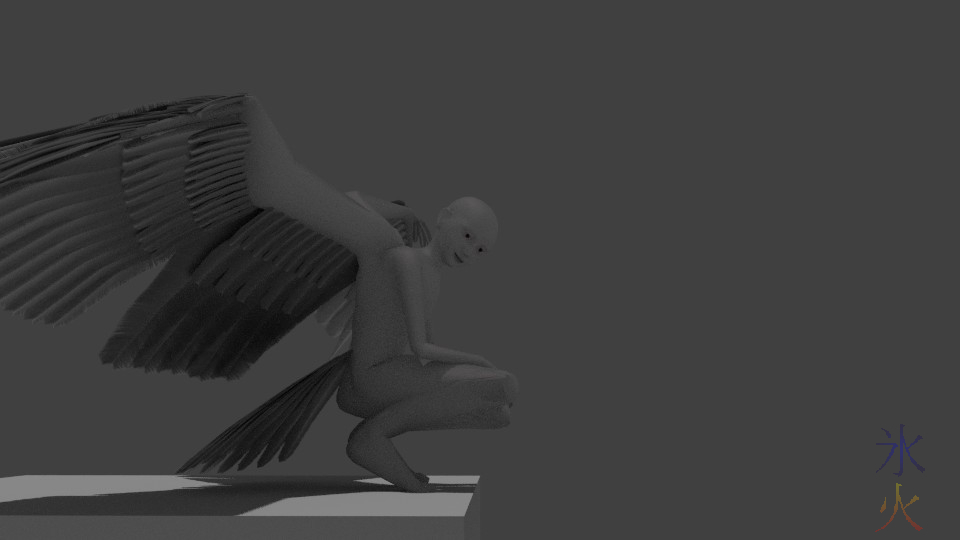 People with bat wings that have a terrifying thumb claw, ridiculously long prehensile tails with a thing on the end that can usually but not always bludgeon, slice or stab, and horns growing out of a horn crest in which is embedded a "gem" of polished keratin (which is a highly sensitive area so they're quite paranoid about getting hit in the head in the same manner guys protect their groins).  The horn crest is a major defining feature as all Dragonkin have it and other Evolved with horns don't. You can absolutely have any kind of hybrid character you like. 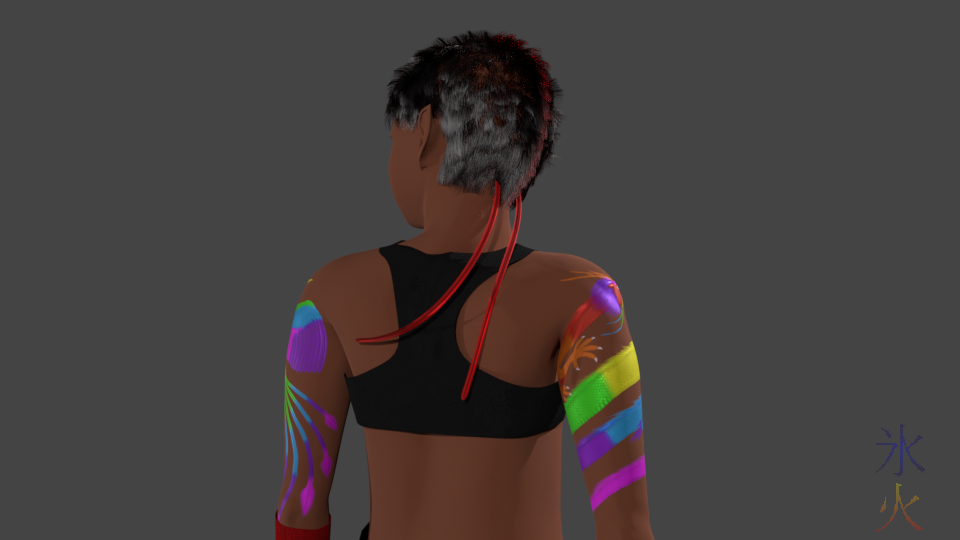 A note on Tribe

A substantial number of Fliers and a much smaller set of non-Fliers (usually children of Fliers, but also ones that married/got adopted in) belong to "Tribe" which is made up of a bunch of smaller Tribes scattered over the world.  Most of them are titled Tribe [whatever a traditional name of the place was] though Europe uses "House" and Scotland and Ireland and possibly Wales use "Clan".  Tribe Fliers are generally easy to pick as they get tattooed on their 25th birthday with one tattoo from each parent (originally it was supposed to be matrilineal and patrilineal from each parent and while some still do that, generally by the time my current block rolled around they'll just pick their favourite tattoo off each parent).  Additionally if they have a lifemate they'll usually get marriage tattoos (which is just something symbolic to them so no losing wedding trinkets).  Clearest examples are higher up in the post but here they are again so you don't have to scroll:

Ae'nur and Tsa'run have the same tattoo on their right arm (it's a matrilineal one, and inconveniently not very clear because I wasn't focused specifically on tattoos in either pic), the clouds on Ae'nur's left arm are from her father, and the one on her neck is a marriage tattoo.  Tsa'run has a fleur-de-lis on his left shoulder from his father.

Some non-Tribe people have culturally appropriated this like Zara's little adoptive family did (she and Dak have Juan's tattoos).

Obviously characters can have whatever ink but if you'd like your character to be in Tribe there is a convention :)

Another convention is Tribers tend to keep their hair long, having it cut short means you've done something dishonourable.

It's also possible I may just end up chucking you in there if not given a lot of information and it seems like a good idea at the time which happened to Boomy (I asked him if he wanted Braveheart facepaint and he said yes and then I got carried away). Totally doable as well though I don't have any other animal bases so the 3d will take a while til I develop some.  I've only got a vague idea of what kind of plant and animal life has developed in this head-universe so go nuts. 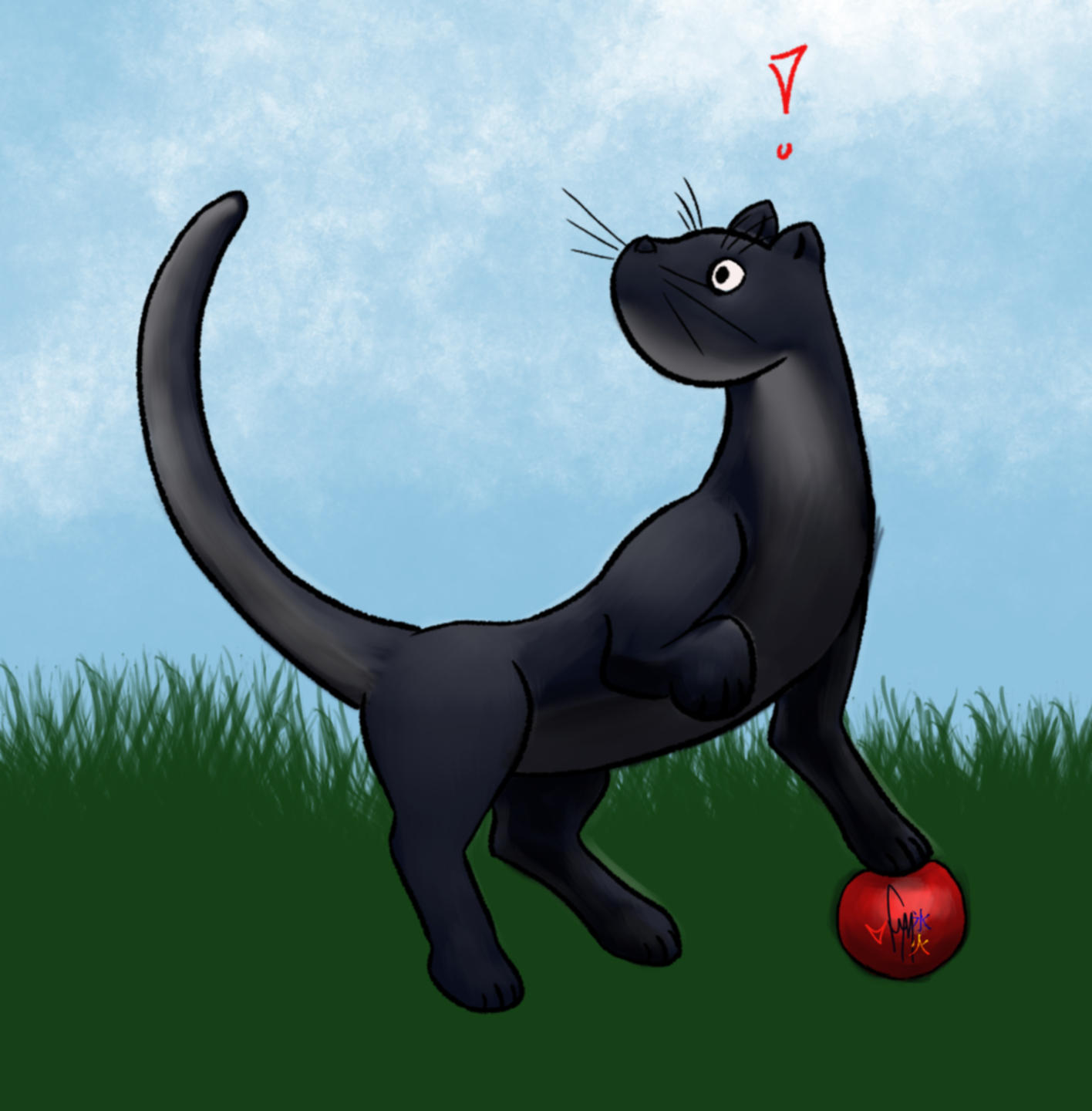 Sweet! How many can I have?

How does the queue work?

I should probably resurrect the todo list.  Things are added to the queue as they get requested.  They get done in the order I get them.  Ko-fi and crypto bribes get bumped to the top.  If I get multiple requests from one person the first request will go in whenever I got it, and the subsequent ones will slot in after everyone else who hasn't had one yet/for a while (unless they're all bribed paid for).

No catch.  Your characters are your characters, you're just letting me use them.  I'll even send you a blend file of the rigged character when I'm done and you can do whatever with it.

I've got some cool vehicle/fashion/architectural/other/etc designs!

Sweet, I'm open to ideas if you want to share.  And definitely not very good at that kind of thing.  Same deal as the characters, your stuff is your stuff that you're letting me use and I'll send you blend files when I've made them.