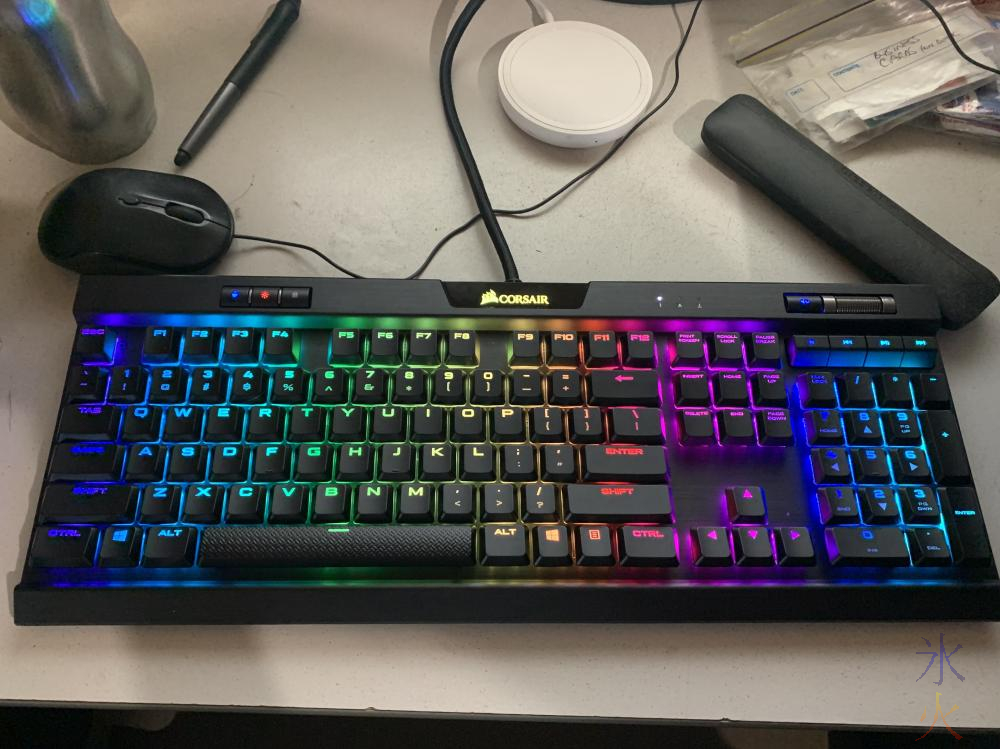 The default setting where it's just gently scrolling left to right is my favourite though it can also spiral and "rain" (where keys randomly light up in a rain hitting the ground kind of pattern).  My old keyboard had a few issues but otherwise still worked perfectly fine (the biggest issues I had were it was a lot harder than I like so my typing speed was greatly reduced as I had to pound the keys, I like just touching them and getting a response, and the right side of the spacebar had popped off so I had to switch to using my left thumb which is the off side for space) but J somehow got the idea that it was well on the way out and bought me that as a wide margin birthday present (no I'm not telling you when that is but it's definitely not yet XP).

I spent three days squeeing about it and he constantly laughs at me because ages later I'm still constantly telling him how much I love it.  According to a super geeky friend of mine I don't have the highest quality switches (which are also his favourite) but at this stage I don't particularly care because the rainbow keyboard is beautifully soft (they're mostly responding to slight pressure which is pretty much how I like to type which has made my typing speed go back up to normal, and is much more quieter!), it's a mechanical keyboard which should theoretically last the better part of forever and it's RAINBOW!

And as luck would have it I actually wanted to get this keyboard (perhaps not this specific one but another one very much like it) when I first got the big rig a hundred million years ago but it's an expensive one and out of my budget.  So I'm one happy little fyn.

Um I suppose I should pretend I've made progress since last progblog.

A problem I encountered while fixing Red's sculpt mesh was the known issue of 3d Coat doesn't like thin areas (like wing membranes x_x).  Because I kept forgetting to check the other side I ended up with a huge hole in the mesh which I couldn't close with 3d Coat's tools (the mesh doctor and close holes tools seem to deal with specific types of holes and this wasn't it).  So I did what any sensible person would do and ran symmetry copy to get the good side copied onto the bad side.

Well apparently that was a bit much for 3dC to handle and it crashed.  I reopened it to this. 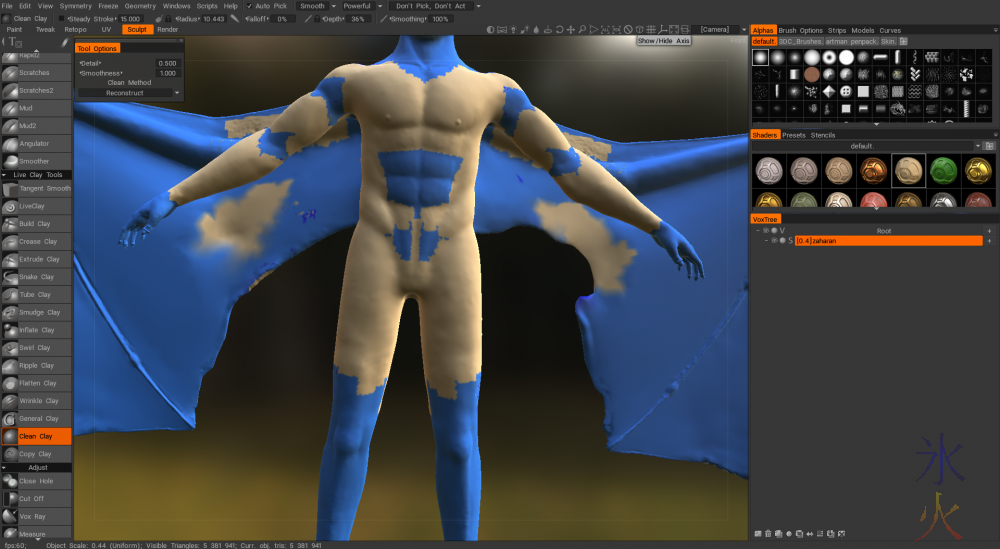 Blender to the rescue! I exported the borked mesh to an obj file, opened it in Blender, silently thanked the Blender devs for (finally after centuries) vastly improving the viewport code so I could actually do stuff in Blender even with the super dense mesh, and used the symmetrise tool there (and a remove doubles just to make sure).  Everything worked out nicely and I was able to resume work with a single coloured mesh. 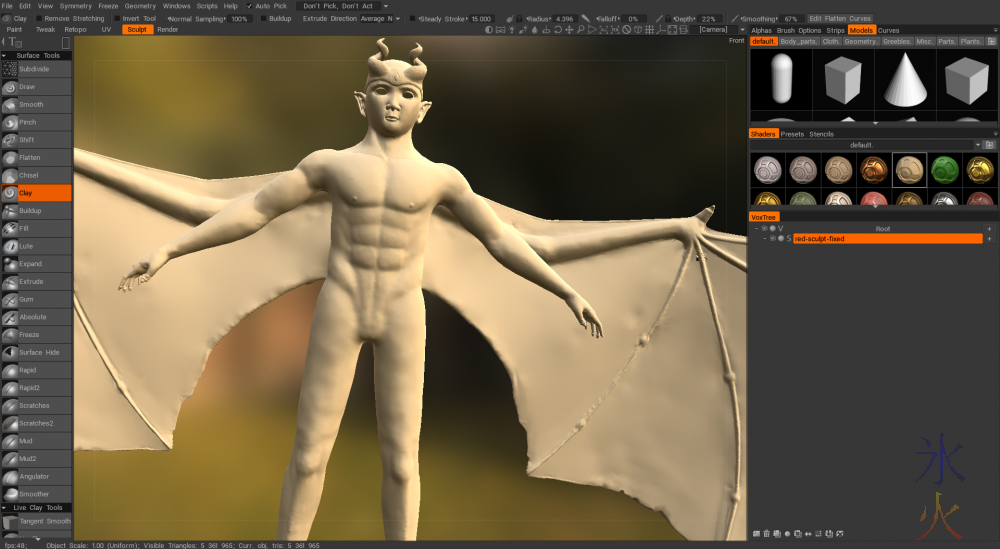 I did contemplate trying to finish the sculpt in Blender but then decided it might be safer to finish this one in 3d Coat and try the next model (which is a minor character) in Blender as the sculpt mode has been overhauled as well and it now has a 3d brush like 3d Coat.  Regardless of whether I stay in 3d Coat or move to Blender for sculpting I will stick with 3d Coat for retopo (because strokes tool is magic) and definitely for UV unwrapping (I'm still too dumb for UV unwrapping in Blender).

As I can only get 15fps in the playback in Blender, I decided I had better do a timing render to make sure the speedup I was doing in my head was accurate (it's supposed to be 24fps).  Cycles was taking FOR FREAKING EVER and the big rig crashed partway through (I still haven't worked out if that's a Manjaro problem or a hardware problem as crashes are really random and unpredictable but thankfully distantly spaced normally, and while I can usually get them to happen when rendering really big images or animations, I still don't know why they're happening and logs are useless).

After I'd restarted everything and was resuming the render from the last frame before the crash, I suddenly remembered WAIT IT'S JUST A TIMING TEST THE TEXTURES DON'T NEED TO BE ACCURATE and switched to using Eevee.

Cycles was taking 40 seconds per frame, Eevee took 2 and the 200 frames I was rendering was done in 10min which is exactly what I want for movement and timing test renders.  The lighting and hair is completely wrong (because Eevee can't understand the node I'm using for it) but I don't care.  My timing was alright so onwards I'm going. 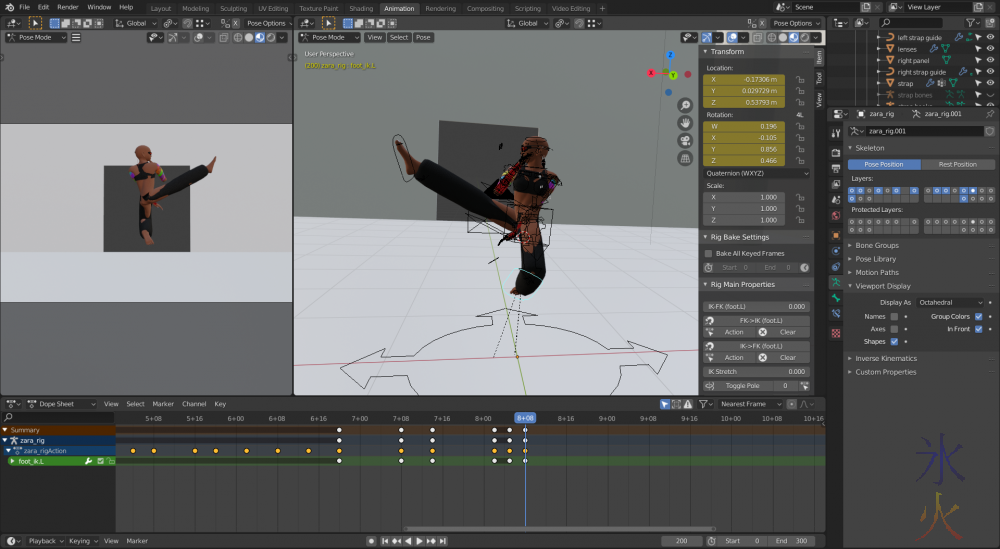 Please excuse the lack of hair (turned it off to speed things up) and glitchy clothes (they're currently using the character rig, I'm going to test cloth and hair dynamics once all the movements are finalised and see if it's a thing I can do or something I will have to fake because I'm inept or need more control being a control freak).

Zara is probably a pretty good character to practise with this rig as this isn't even close to the most complicated part of this test.  I predict that will be the flare.  So far the plan is salute in (done, Art salute is super basic), defensive crane thingi into kick (done), jumping kick (what's happening now), drop to sweep immediately followed by another one, another jumping kick into dragon stance, flare into handstand and back onto feet like a normal person, and probably at that point realising she has company.  I may add, subtract or change things up depending on how the actual flow goes.  I would be terrible to work with in a team because I can't even follow my own best laid plans.

And then once I get Red done there will be the inevitable sparring match.

I feel like I'm moving again which is a super nice change from feeling like I'm stuck and never making any progress at all.