So I had these grand plan to at least finish the tail feathers if not the entire phoenix over  the weekend, and I would have succeeded if it weren't for those meddling kids!

Actually the kids didn't do anything, we had a pretty chill weekend, JJ took 10yo out for a hike and that was about it, and my tai chi plans were messed up because I hadn't done midweek laundry or weekend laundry at the time and thus had no clothes for the entire day (except for one item which I failed to notice hanging on the airer in the laundry because I was too busy being cold and grumpy but it was the last item of clean clothes that was needed to make going out possible aaaaaaahhhhhhh).  I also spent way too long researching and trying budgeting apps because I finally admitted defeat on being able to run things in my head (that was partly sheer subbornness and partly because I knew I'd lose many hours researching and angsting and playing around).  I did end up picking two  that I'm working between because they both have stuff that I like and I apparently can't do things sensibly.

Anyway the actual problem was, I completely failed to notice that two of the tail feathers were too close together until I started doing the barbs.

HOW DID I FAIL TO NOTICE THAT FOR SO LONG.

Despite assurances from the crew on the SteemArtists server that it looked fine, it grated so much that I redid it.  Now it's a bit more evenly spaced (and I fixed the outermost green sections as well as they weren't following the tail flow properly, I must have started them from somewhere completely random inside the floofy bit of the tail o_O). 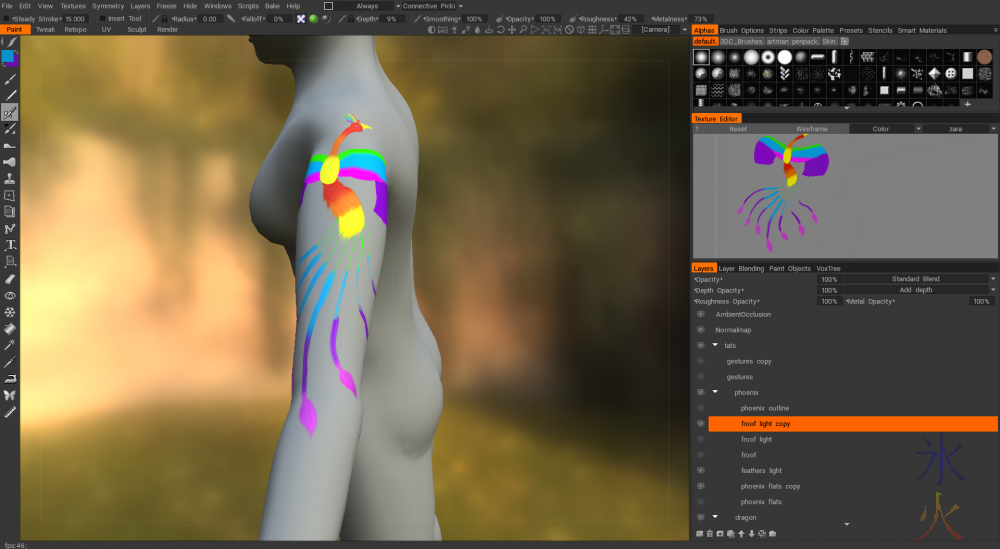 I zoomed the uv map view right in so show the better spacing.  Now on a flat surface I would really need more symmetry in the tail feathers but the reason the four outermost ones are pointed in the same direction is because I think there's better flow when they look like they might tesselate on the underside of the arm. 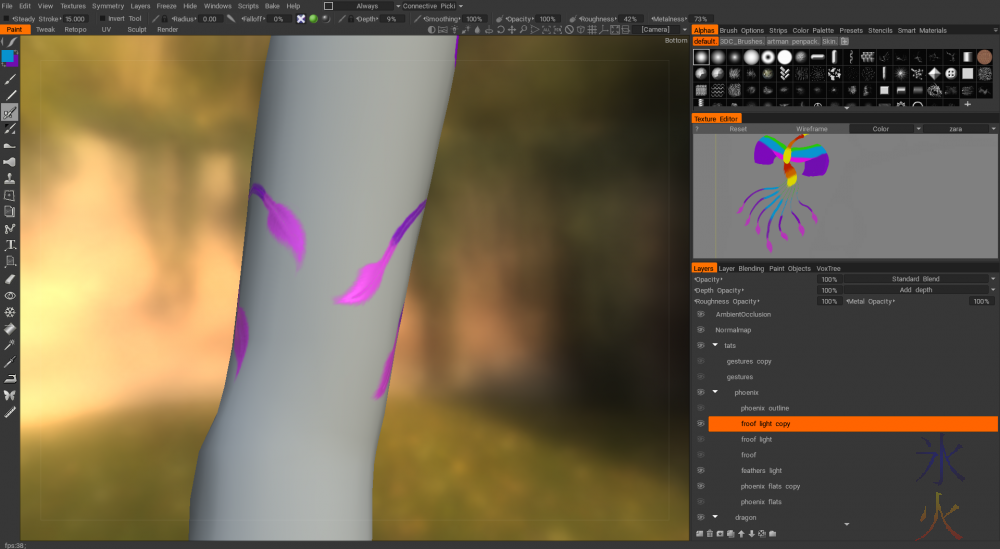 Why does it matter when it's not like that's a part that gets seen that often? It's because I know and that's all that matters!

And also why this is going to take forever.  I've been having increasing periods of feeling like no matter how hard I try or how much I push myself, I'm never going to be able to resolve the catch 22 and thus never going to get to where I want to be and it's seriously depressing.  But I'll keep going because I desperately want this with every proton, neutron and electron.  And maybe things will align one day.