One of the things November brought was our first Medieval Faire.  I took a lot of photos of the boys and their friends (14yo was meant to come too and seemed interested the night before but on the actual day was adamant that she wasn't going) hanging out and doing fun things, but none are turned away enough that I feel comfortable putting them up.

Also I spent a lot more time hanging with my friends, one of which I hadn't seen for a while, than I did taking photos, the downside of that is that I could have sworn I took photos of 12yo hanging with his friend but apparently I didn't.  Parenting award.

The kids had a spin around the marketplace that was there (lots of interesting stuff in stalls, 16yo bought a sword pendant necklace that included an insert about the actual historical item it was based off), and watched some historical re-enactment combat (16yo described the behaviour of him, his friends and the rest of the crowd as being like the npc crowd in a game as they cheered the players on).  In between performances, some members of the company were showing the crowd their armour and letting people hit them as hard as they could with a sword and answering questions about weapons, armour and fighting techniques as far as I could tell from casually listening in.  The big boys spent quite a bit of time with the company asking questions and probably checking their knowledge as they're quite interested in medieval weaponry.

Then this guy rocked up. 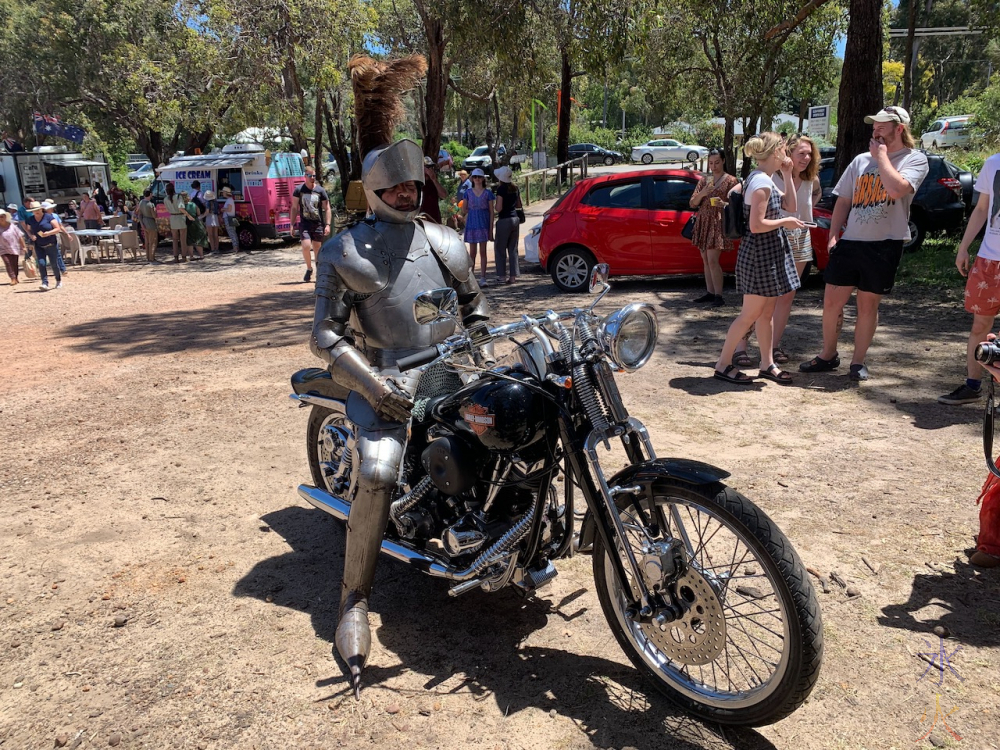 He got a lot of cheers as he made his grand entrance (and probably got a lot of looks as he was driving up unless he lived around the corner).  He posed for a few photos, wandered around for a bit and then made an equally dramatic exit (he just kind of turned the bike around and drove off, it just looked dramatic because you don't see full plate mail every day now).

The other notable thing of the month was finally taking 16yo for a return trip to the museum.  12yo tagged along too because he loves the museum.  Unfortunately I didn't get a photo of 16yo's reaction to the blue whale skeleton as we got into a conversation first with some lovely old ladies who were from one of the regional areas and then one of the museum volunteers joined in, telling us a bit about how it was a juvenile (which surprised all of us) and where it had come from (down south I believe though I honestly can't remember now).

We let 16yo lead the way and our first stop was in a section showcasing some Indigenous weapons and crafts and a short documentary that the boys sat and watched most of (this doesn't surprise me in the slightest with 16yo, and has been surprising me less and less with 12yo as his interests have increased along with his ability to concentrate or at least wait). 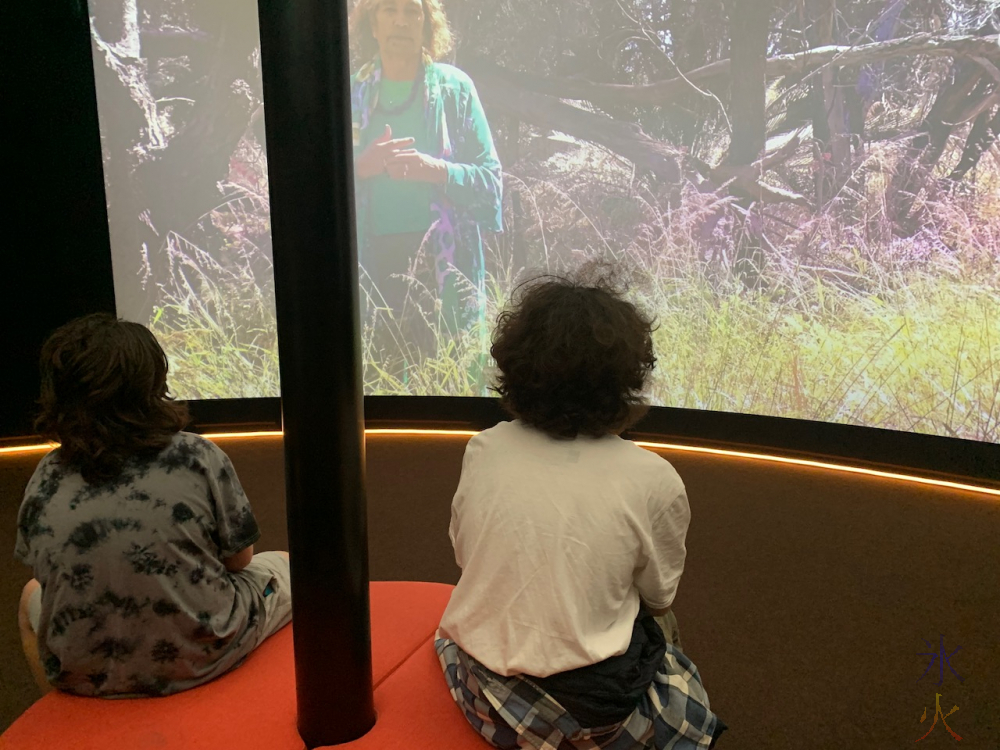 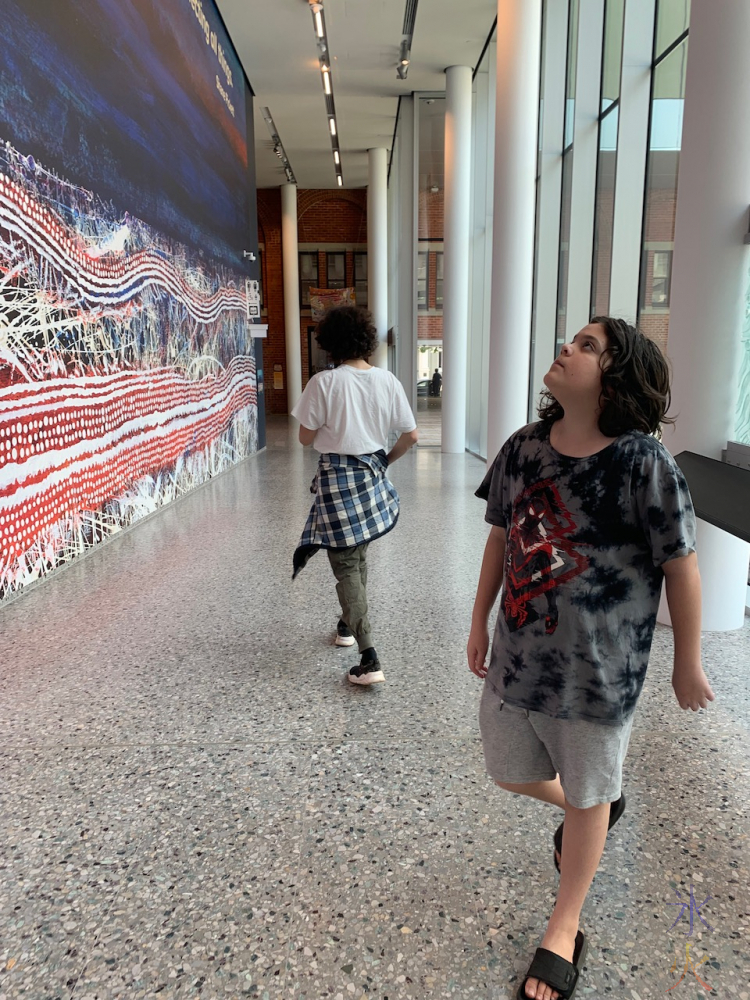 We passed through the Innovations room fairly quickly as there was a school group in the area (they were up on the mezzanene floor painting the Parthenon murals, but my children seem to have a general aversion to school groups), and 12yo was quite adamant on playing against 16yo on the "retro" consoles.  He really wanted to play Mario Kart but as per usual so did literally everybody else who happened to be passing through, so they jumped on the slightly less popular soccer game. 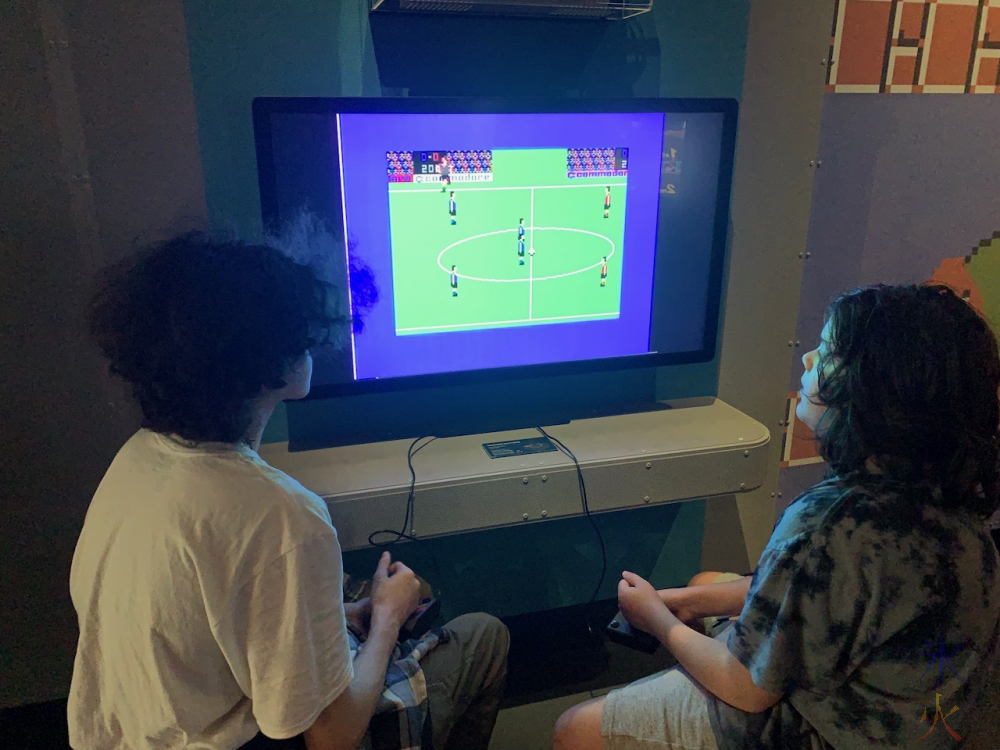 Much banter and giggling ensued as 16yo (with better coordination and ability to pick things up quickly) nutted out the game inside the first round that they played (which wasn't a full round, they had jumped in on an abandoned game) and beat 12yo.  Some minor shade was thrown on the dodgy gameplay and graphics when comparing and contrasting to current games, even the ones that are deliberately made in the "retro" style.

We managed to make it to the crystal room and spent a bit of time looking at the various rocks and 16yo told me a bit about meteorite composition that wasn't on the signs, and some stuff about various points in history where they've hit the planet and made an impact (literally in some cases involving large craters that still exist, through to large chunks in a random paddock). 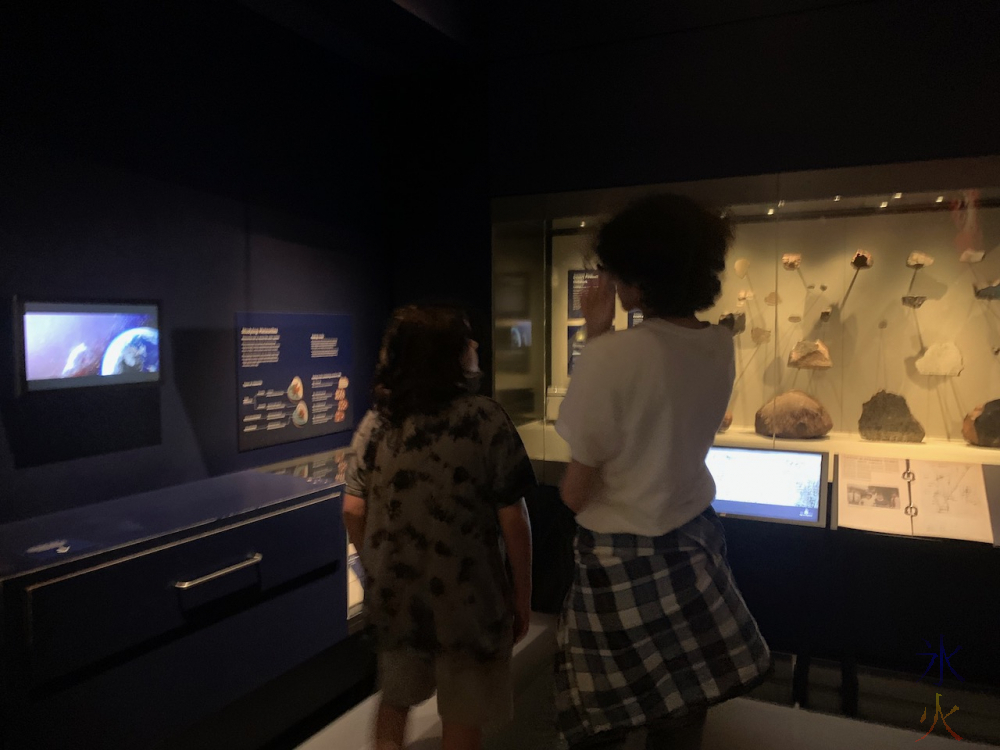 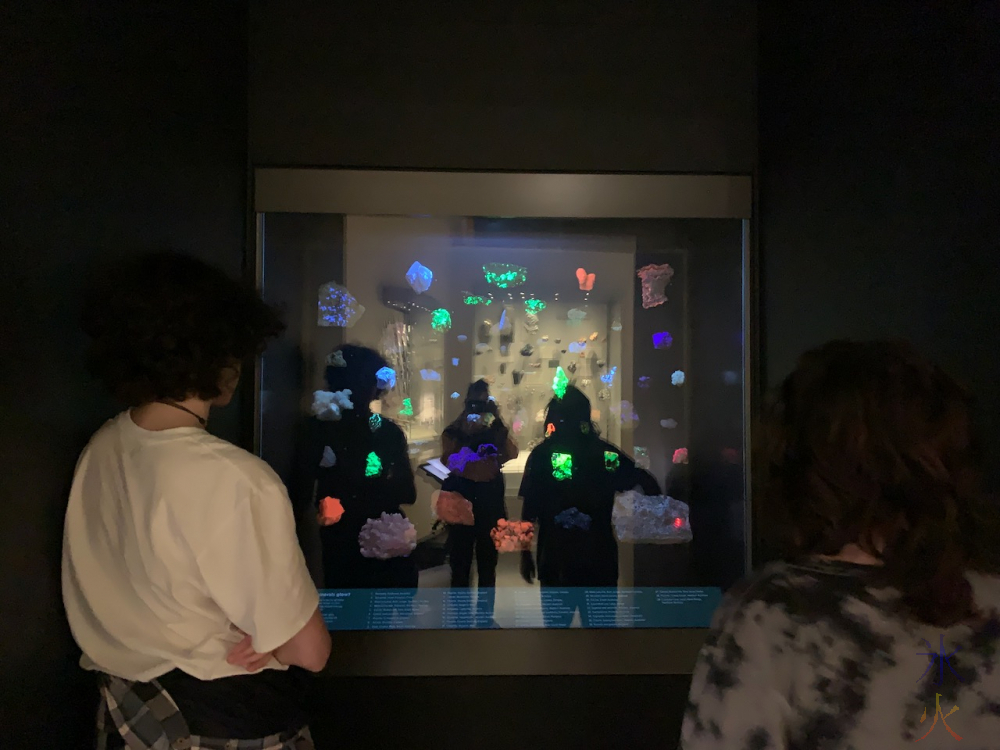 One of the displays had a creation story on it, about how a couple of islands were formed from two boys getting too tired to swim all the way back in to shore after getting constantly dropped out at sea by a couple of eagles who were angry with them for taking their eggs. 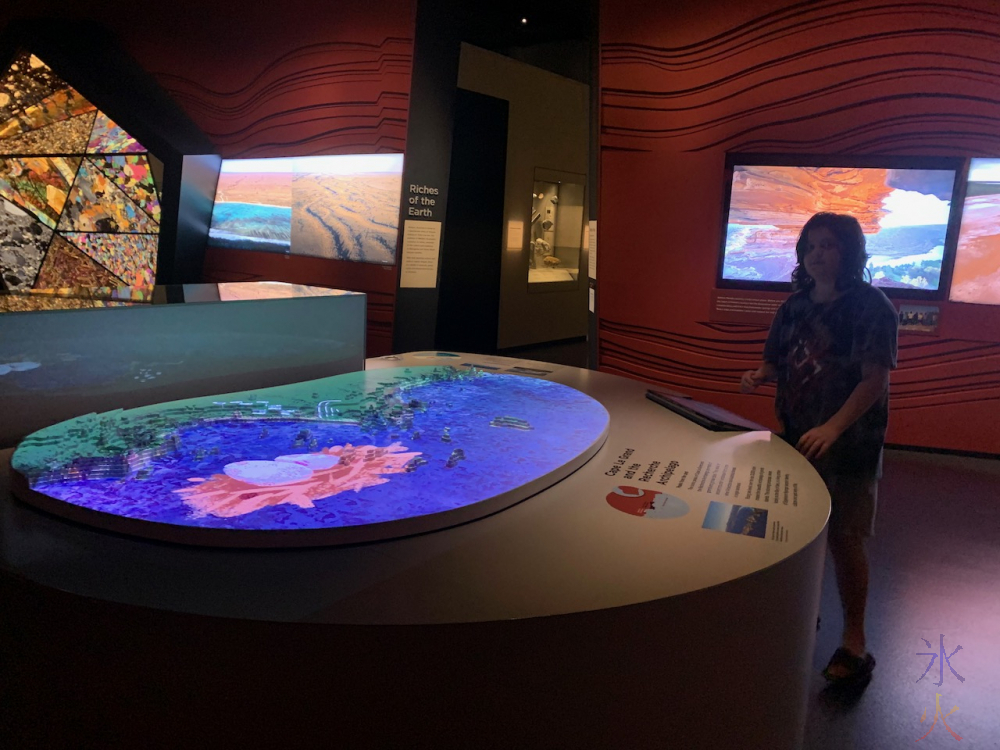 This led to a pretty interesting discussion with 12yo about how and why creation stories come about and current knowledge vs past knowledge vs future knowledge (very speculative because obviously it's very hard to know what people are going to know in the future).

16yo was being very aware of the time for a change and eventually requested that we head home so he had some time to rest up before gymnastics, where he and his friends/team mates and coach spent yet another session out of many choreographing and refining their item for the end of year display.  This newfound time awareness has been very welcome (we have had a few occasions where he didn't realise a game would take longer than he thought and would sometimes make us leave a bit later than I want while he's finishing up) given that he's going to TAFE next year and is really going to have to stay on top of things.