!schooling from whenever til now

Due to stuff (some it was the parents coming up to visit for a couple of weeks, some is that business has picked up dramatically), I haven't been keeping track of the homeschooly stuff.  Also we've been finding better things to do than sitting and doing bookwork, so it's a really good thing that's not the core of our homeschooling program (I need to write one of those for next year by the way, and also a booklist).  So here's some photos of things it occurred to me to point a camera at. 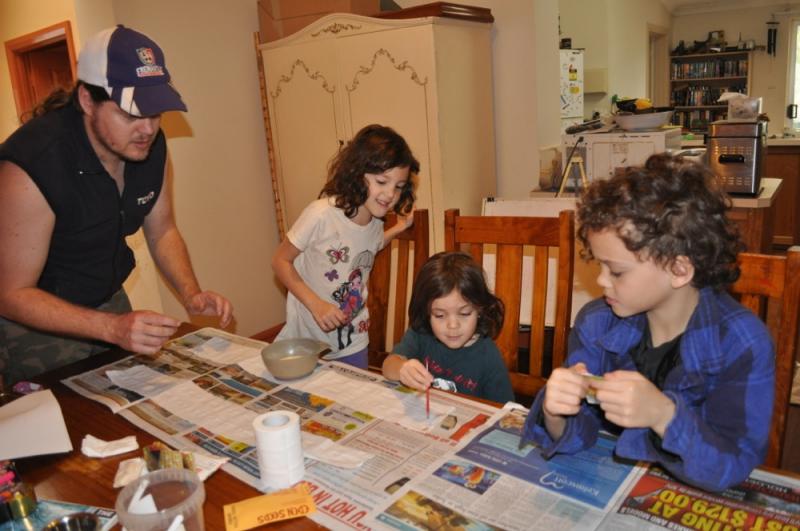 We had a storm that knocked out all landline communications in my area, as well as at least part of the grid the airport is on.  We just had no easy internet (no phones, only use mobile, I had 3G if I really needed to look something up).  The building that Josh's office was in had no power, so the lot of them hung around for a few hours, and when the power didn't seem to be in any danger of coming back on, they packed it in and he came home.  He and the kids chose some stuff to plant, made glue out of flour and water and then used that and toilet paper to make seed paper. 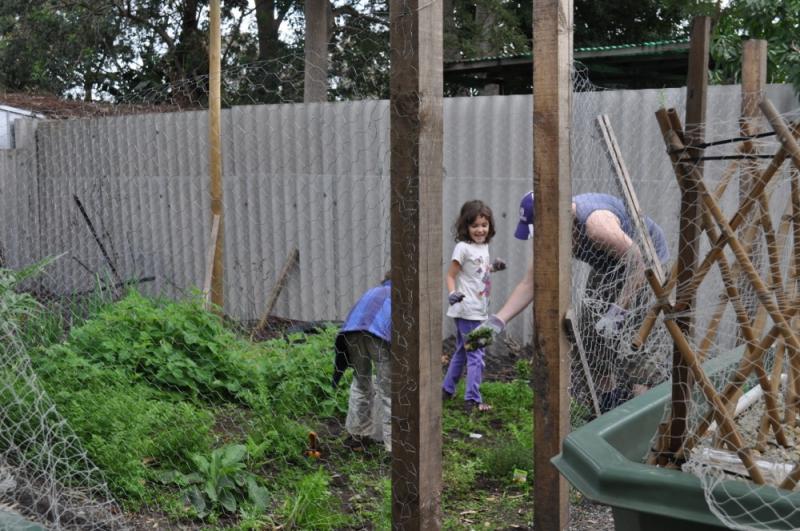 I don't get out into the garden much at the best of times, plus had no idea what the ground cover in the vege patch was and kept forgetting to ask.  Josh and the bigs did a LOT of work to remove the green carpet so they could put down their seed paper.  What they pulled up covered the chook pen for a couple of days til the chickens ate it all.  They also pulled some some purple carrots.

We used Minecraft to do some maths.  I told the kids we were going to work out perimeter, area and volume of the stables.  Tao asked what those were, I explained them and he immediately responded "Oh, I do that all the time!" I wrote out the problems and just got them to work through the problems and tell me what to write.  Ru just had to do one stall, Tao the entire stable (I told him he could do the first floor if he wanted but he opted to do the entire thing).  He's done some more Khan Academy recently and apparently knows how to read line graphs.  I asked Josh if he had taught him how to read line graphs and he said he'd started showing him some graph stuff ages ago and meant to reinforce it recently but hadn't had a chance to. 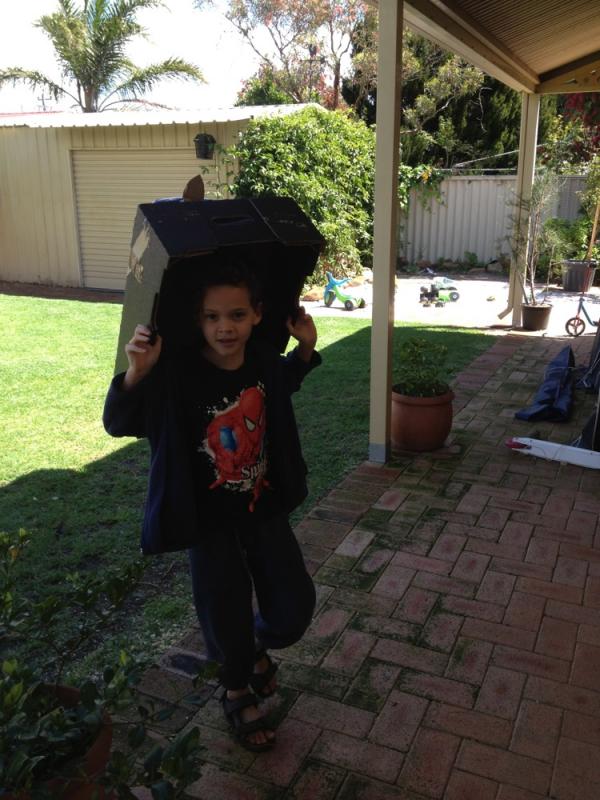 A friend of Ru's had a 9th birthday recently and decided the theme was "your favourite historical character".  It didn't enter my thick skull to take photos before we left or remember my camera when we went, but Tao spun up a costume out of a cardboard box, cardboard pieces, an ice cream container and a streamer and went as our old dog Fenrir.

After the party, Cub and I took Tali for a walk.  I decided to go around the loop boardwalk at the bottom fo Pioneer Park as I hadn't been through there for a while.  With all the rain we've had there was actually a swamp. 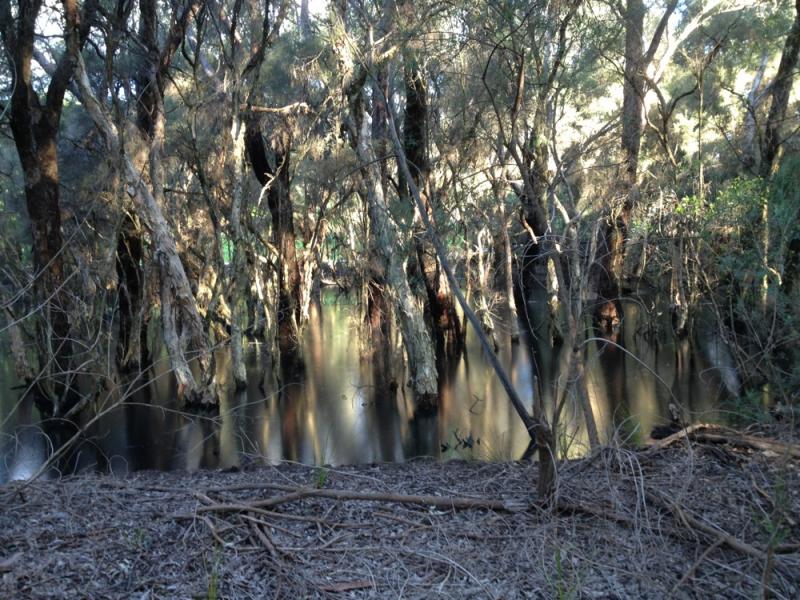 I thought it looked so cool I tried to capture its coolness with my phone and didn't do that well but it's better than not having a photo.  I decided to bring the bigs back the following day to check it out.  We did the loop, read the signs and talked about swamps and ecosystems, and then Ru, who traditionally hates going for walks, declared she wanted to keep walking and go on the bushwalk.

It's one of our favourite trails (partly because it's the closest) so Cub and I were quite happy to repeat it. 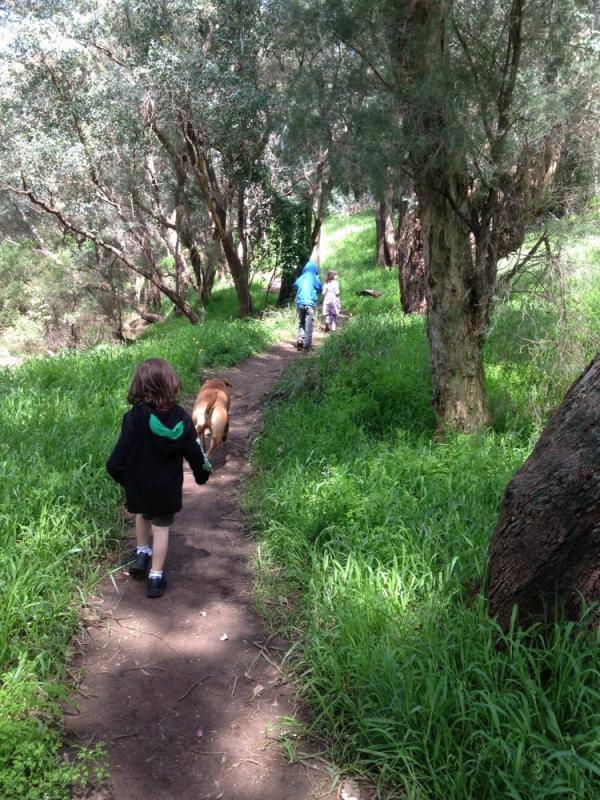 The river was kind of full and everything was very green.  It's been a while since I've seen it that green, mostly because I don't cope with the cold and generally refuse to leave the house if I can avoid it in winter. 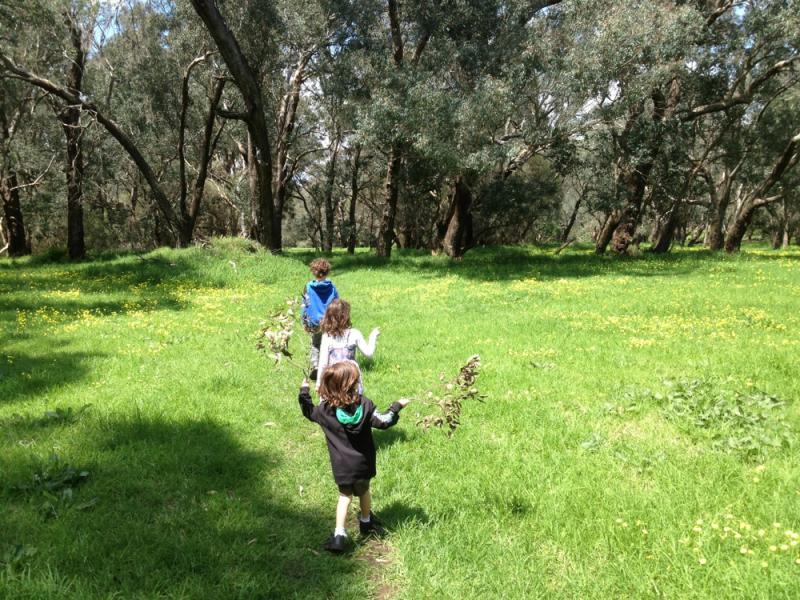 Open Area #1 (a label I gave it because it's the first one we encounter after emerging from the trail) was teeming with yellow flowers and being worked by a few bees.  I reminded the kids again to watch their step, they generally sensibily stuck to the trail anyway. 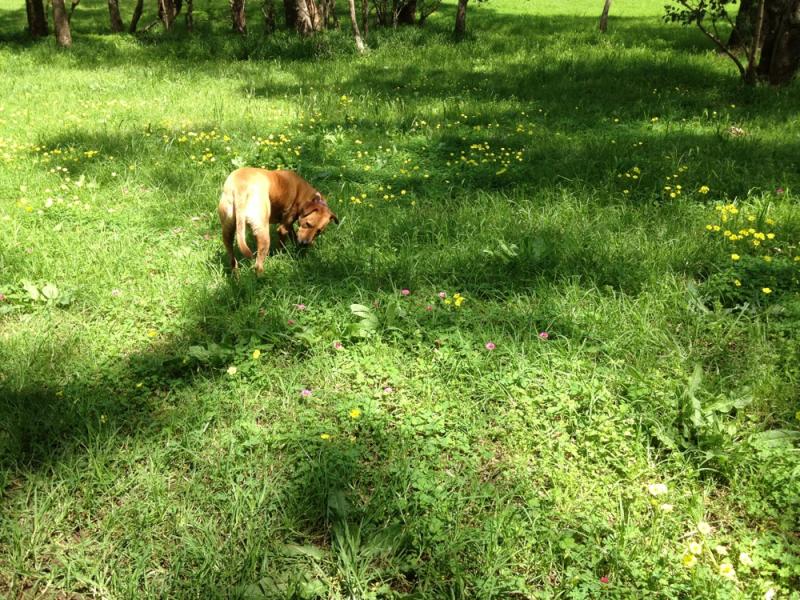 In Open Area #2 (just through the trees from the photo of Open Area #1) Ru was quite excited to find some pink versions of the yellow flowers that were everywhere.  I went to take a photo and caught a photobombing dog that of course had to go and investigate what Ru was excitedly pointing at.

I've rejigged training as well so that I'm doing less and the kids are doing more.  The kids are now playing on the playgrounds while the sun is up, and as it's getting dark they come in and have a drink and a snack and watch the class.  After they're done, we go outside and I do some training with them (currently just involves a little bit of stance work, easy combos wherein I try to fix up stances and technique as we go, and lots of jumping and reflex work (note to my 4yo, when I say JUMP, jump over the stick not stand there and squeal at it, even if you do have the cutest giggles ever, least he can duck).  When they tire, they have more of a snack and watch the class while I duck back in and try to slot back in somewhere.  We usually do forms at the end of class and the bigs join in.  They've been remembering more and more of the basic form.

Tao wants to do both footy and gym next year if we have the money and they don't clash, Ru wants to do gym and horse riding (though realises she won't be able to as that's kind of out of budget), Cub will old enough for footy and will probably want to do gym if the other two are doing it.  We're also kicking along a few long overdue lifestyle adjustments.  At least life is never boring.