The conclusion to the sorry chicken saga.

Where to begin.  Can't begin at the beginning, that's already been done.  See above.  So, let's find a point in the middle to start.  Firstly, after Tempest's last two chicks (the yellow one she'd hatched and the small Australorp she adopted) died, we worked out it was those bloody fleas.  The adults weren't so badly affected by all appearances, though the eggs were fewer and further between, so maybe they were affected.  We seem to have bathed the heads of the other chicks in olive oil in time to prevent an outbreak of chick killing proportions.  Josh also put some concrete slabs under the roost, as apparently this helps break their life cycle or something.  We like to go with naturalish preventative measures and remedies as much as possible for everything, saving The Big Chemical Guns for when there is a situation that warrants it.  This was one of those situations.

Josh went out and bought some flea killing solution from City Farmers, and we spent the morning dunking chickens.  Josh noted there was a level of hate he didn't realise the chickens were capable of, as we laughed at their soggy appearance.  Fuzzbutt in particular looked hilarious that saturated.  Unfortunately I didn't get any photos as we had to go out shortly after dunking them.  The fun exercise of the morning was chasing Scraggly around the garden.  Really should have grabbed him first rather than Chickpea as Scraggly is intelligent; he refused to get caught in the same trap as Chickpea.  Chickpea on the other hand is stupid.

Secondly, I have this evil, sociopathic toddler. 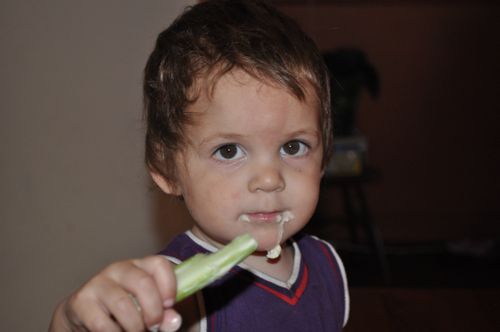 He murdered one of Chess' chicks.

Okay, he picked it up to check it for fleas and injury as he's seen us do.  Problem is, he's still learning how to handle things gently, and inadvertantly crushed the poor chick.  The chick itself was probably quite lethargic if Cub was able to pick it up that easily, they're usually scurrying away with their scrawny legs blurring as they accelerate toward Chess and relative safety.  So perhaps he's guilty of the lesser charge of manslaughter (chickslaughter?), or maybe ignorance causing death.  I don't know, laws get more and more ridiculous and complicated as more get kludged on to deal with new things that come up without any revising to get rid of old things that have no relevance.

The toddler by the way is adorable and sweet and agonisingly cute, the only evil in him is using his powers of cute cheeky face to defuse a situation where we're annoyed with him.  He has a lot to learn.

Despite the tragic death of 9 chicks, the sorry chicken saga has a happy ending.  Tempest, still broody after losing her entire clutch, managed to adopt the 10 day old naked necks and the large Australorp, the chicks she'd previously rejected.  The chicks took longer to bond with her than she did with them as they were initially scared of her (as would anyone if someone attacked them and suddenly wanted to nurture them), but they got there.  Having not had a mother for so long though they are a little bit clueless, they've very quickly worked out the food call and are there as soon as she makes that noise, but it's still taking them a bit to work out they should follow her around when she makes that bukbukbuk noise, and if she squawks running to her is a better idea than standing around looking stupid or running in a random direction.

Hopefully, we're done with fleas and other misadventures and can get on with life.

Summer rain
Photos from the garden
I think one of my roosters is possessed
Christmas time, mistletoe and wine, and slightly different this year
New camera, more aquaponics photos
Work, Wannabe and other projects and a dash of unschooling
Photos. Lots of them.
Life and !schooling in 2012
The sorry chicken saga