There was much excitement and trepidation at Wannabe when Chess, our bossy little evil Pekin bantam went broody, and amusement when the more demure Tempest decided that she, too, would also like to hatch some eggs. 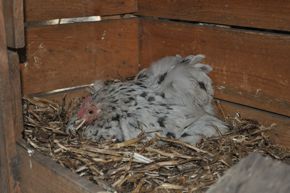 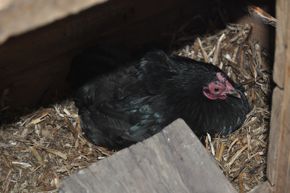 We were pretty thrilled to have broodies, as one of our long term plans was to increase our flock naturally, including letting the broodies raise their chicklets, and bring in new blood every so often to prevent too much inbreeding.  This idea has since expanded to Josh planning on developing his own chicken breed. 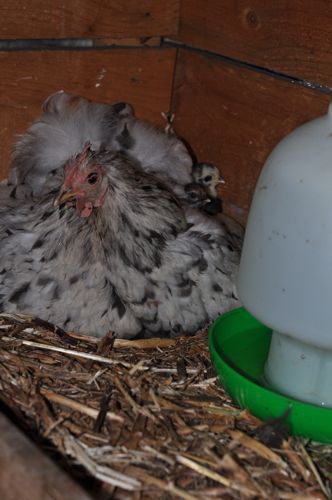 There was a day of waiting around while the fourth chick rested up from hatching and gained some strength and balance, then Chess took them out into the coop to forage.

And that's when trouble started.

See, when we suspected Chess had gone broody, we left her 5 eggs to sit on.  There is a chance some other chickens laid on top of her like I saw them doing with Tempest later, but she is such a little psycho that I'm pretty sure they were using the other side of the nesting box and she was stealing them.  Either way, she ended up sitting on 24 eggs.  We did a few candling sessions and removed ones that weren't developing, left the most developed looking ones under her and moved the less developed but otherwise same looking ones under Tempest (who had abandoned a previous clutch due to a failed attempt to move her to the brooder, but otherwise had remained broody).

Seeing as she'd taken the chicks out we weren't sure if we should remove the remaining eggs or if they were going to hatch.  She wasn't going too far from the nest, and while we were deciding, Stripey hatched out on Tao's birthday.  Chess sat on it to keep it warm but it spent a couple of days under Tempest as Chess took the other four out.  Josh candled the remaining eggs, for some reason put the three most developed ones under Tempest and got rid of the rest. 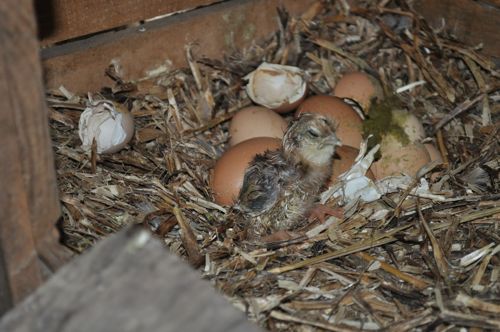 We tried slipping Stripey back in with Chess as we didn't want Tempest to abandon her eggs.  Chess wasn't interested.  We tried playing 2 for 1 (stealing one of Chess' chicks, having her work herself into a frenzy and then returning both it and Stripey) and then moving all of them into our brooder.  No avail, she resoundingly rejected it.

It did stick out, it was red with black stripes, the others were black with red eyebrows, black and yellow with fathered legs, yellow with feathered legs and five toes, and white.

Stripey lived in a box under a light on the dining room table with its eyes shut almost non-stop peeping while we considered options: 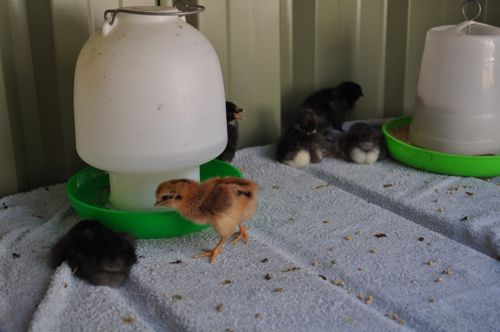 Shortly after we moved Stripey and its five new Australorp foster siblings into the brooder, we found out one of Tempest's eggs had hatched.  We couldn't find the shell though.  We candled Tempst's eight eggs.  Two looked like they might hatch (probably the ones from Chess), six hadn't developed.  These were marked for removal with a crayon.  That evening as the chickens were headed for the roost, we placed the cheeping box of chicklets with lid weighed down next to the nesting box.  That night we commenced "Operation Stealth Hatch", swapping two eggs for two chicks over the course of an hour.  I had a problem as there were supposed to be two unmarkd eggs and six marked for removal, but each time I kept managing to pull out three unmarked eggs.  It got to a point where I gave up removing the eggs and slipped both unmarked egg and chick in.

The graft was a success, and all was well with the world. 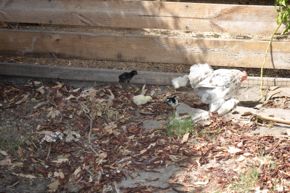 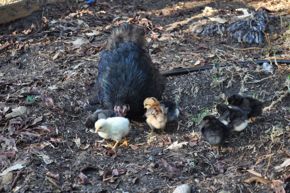 For a while anyway.  Thursday just gone (6 Jan 2011), my in laws were visiting and my father in law found one of the Australorp chicks dead in the nesting box.  There was no sign of injury, so it was put down to one of those unfortunate incidences of chickens randomly dropping dead for no reason a human can decipher.  The next day, Stripey and the remaining four Australorps were lethargic and not following Tempest.  We brought them in and put them in a box under a light.  Later that day, Stripey and another of the Australorps was dead.  We quarantined Tempest and her remaining yellow chick (who was looking very healthy and active) in the brooder and returned the Australorp chick that was still on its feet to them.  Josh ran down to City Farmers to get some vitamins and medication and things, which were added to their water.  Our efforts were in vain and the two Australorp chicks eventually died.

This morning, the chick we thought had pulled through was on the floor of the brooder not moving.  Josh brought it in and set it up in a box under a light.  This afternoon, it died.  We struggled for a while to try to work out what had happened.  Did one or more of the Australorps have some disease? Josh rang the person we got them from to get her to keep an eye on her other chicks just in case.  Could it have been something they picked up here? We kept an eye on Chess and her chicks, but like Tempest's surviving chick, they were very healthy looking and continuing to run around and eat and doing things chicklets do.  Perhaps those bloody stickfast fleas had overwhelmed their systems.  We're still not sure.

We watched the yellow chick standing in the centre of the coop with its eyes shut peeping monotonously whenever Tempest was standing still.  It would scurry after her whenever she moved enough and when she called it to come eat, but otherwise carried on with the incessant peeping.  Tempest for her part was checking all the nooks and crannies in the broody box sadly bukking for her missing chicklets.

I'm not sure why but we thought it would be a good idea to see if she would accept any more chicks, ease her bleeding heart or something.  A backyard breeder out in Gidgegannup had some 10 day old chicks, same age as ours.  We cleaned out the brooder, hosing it down and changing the hay in the nesting box.  It necessitated moving Tempest and her chick into a crate and putting them in the bathroom.  We drove out to Gidge and got two yellow naked necks and two Australorps.  They are massive compared to our 10 day old chicks.  Apparently raising them under lights will do that.  The box was placed in the bathroom with the crate and I sat in there to supervise.

Everything started out well, the new chicks were cheeping which got Tempest's chick (huddled under her at the time) to cheep in response.  This led the chicks to follow the sound.  Tempest wasn't showing hostile signs so I opened the door.  Chick walked in, got pecked lightly and hid behind the feeder.  I put the other chicks near the door to see what would happen and Tempest started purring and feeding them, and occasionally pecking at the naked necks.  Then they all burrowed under her somehow.

I probably should have left it at that but I decided to move them into the roomier brooder.

Tempest went on the warpath and attacked the naked necks and the bigger Australorp.  She didn't attack the smaller Australorp, pretty sure because it looks a lot like one of the ones that died.  Its behaviour confuses her though.  She did double take upon seeing the bigger one due to similar markings but probably has noticed it's a bit bigger.  I tried getting them settled in the nest but she was pecking, so I removed her to get the chicks back out.  She fluffed at me and marched straight back in there and settled with all of them diving under her.

Seeing how they go tomorrow, if she's still attacking we'll remove them and try slipping them in at night.  If she's still attacking after that we'll remove the bigger Australorp and the naked necks and see if she accepts the smaller Australorp and hand raise the other three.  I'm not sure if it would have gone any better or just had the same result if we'd just slipped them under her in the night seeing as she's not sitting on eggs.  Live and learn I guess.

Main lesson to note: mark the eggs you leave for the broody and remove the rest.

Summer rain
Christmas time, mistletoe and wine, and slightly different this year
New camera, more aquaponics photos
Photos. Lots of them.
Life and !schooling in 2012
Work, Wannabe and other projects and a dash of unschooling
Damn those stick fast fleas to hell
I think one of my roosters is possessed
Photos from the garden