It's the hottest driest summer ever in Australia (except in Queensland and northern WA where they're experiencing floods, and meanwhile in Europe where they're having longest coldest winters with craziest snowfall).  Here in Perth most of our rain happens in winter with drips and drabs here and there in late autumn and early spring.  We don't usually get rain in summer.  The last few days I've felt quite at home while a large number of my friends have been complaining of the oppressive, stifling, terrible humidity.

Yesterday, I noticed the humidity, which probably means it was pretty damn high, and not helped at all by the fact that there wasn't any wind worth mentioning.

Right now there is a particularly heavy cloud going over and my big kids are outside whooping excitedly about it and jumping in puddles.  The temperature is lovely and cool and very much like Christmas Island, which is making me simultaneously happy and homesick.  The rain smells lovely.

Of course I had laundry on the line and got up a bit too late, it got an extra rinse in the first shower so I chose to leave it out there. 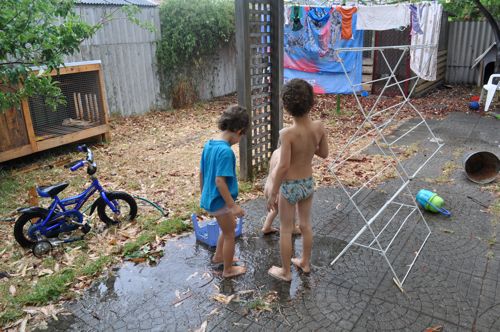 The kids were terribly excited by the first shower, which wasn't that heavy in the grand scheme but dropped enough rain to leave some great puddles around the place. 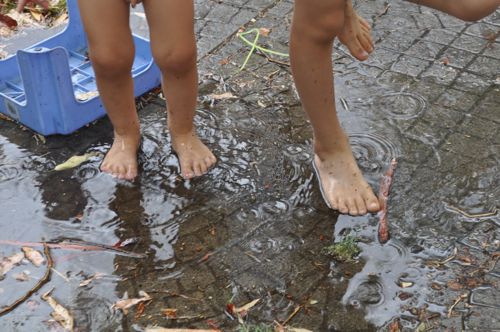 I chose to not follow them around the house as they ran around revelling in being able to play in the rain without freezing to death like they do in the winter, when they're only out there for a couple of minutes before retreating inside for a warm bath.  They've been out there for a couple of hours already, dancing in the rain and jumping in puddles.  I'm not game enough to take Josh's camera out to get more photos after that last shower as I have no idea how water resistant his precious is.  It's great hearing the kids having a great time.  The chookies are slightly less impressed. 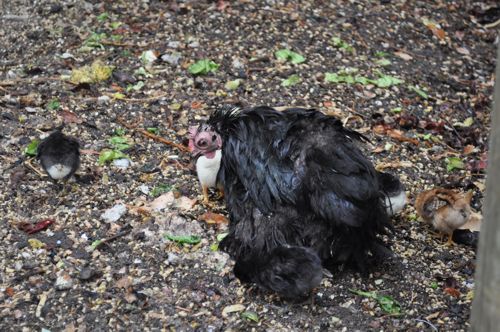 I'm quite happy with the extra water and not having to bail the bath onto the plants (though I wish I had a plumbed in gray water system, stupid over the top and extremely wasteful health regulations, rather than letting it run down the drain), even if it did mess up my laundry plans.

New camera, more aquaponics photos
Damn those stick fast fleas to hell
Christmas time, mistletoe and wine, and slightly different this year
The sorry chicken saga
Photos. Lots of them.
Life and !schooling in 2012
Work, Wannabe and other projects and a dash of unschooling
I think one of my roosters is possessed
Photos from the garden