[8yo is playing  Civilisation Revolution on the PS3, I glimpse a city I think is called Berlin but not sure whether it's his or computer's]
me [not thinking]: what race are you playing?
8yo [looking at me like I'm an idiot]: ...humans.
{I kick pre-caffeinated brain into some form of gear]
me: what CIVILISATION are you playing?
8yo: Oh.  Germans.

[7yo pats cat sitting on my lap]

After all that experimentation, it was the antivirus after all (one of the first things I turned off to no effect because I'm not sure how the "web intelligence" bit is attached to the main part of the program).

Josh guessed "something" between the http and the transport layers and this makes sense as the "web intelligence" scans incoming file attachments and I think may also be checking websites for malicious scripts (which would probably never get executed because I use NoScript, unless it got injected by a website I use frequently that didn't have it before).

Skype is clear (for now, though I'm kind of looking forward to dumping it).

There was a large set at SciTech in the main exhibition on our last trip and Tao made a wearable R2-D2.  It was the first time I've seen it in action and I've since acquisitioned a few sets of 3 as group presents for friends' kids.

One of my automatic go-tos at least every Silly Season, if I'm organised enough I'll occasionally poke in to organise a birthday present as well.  Beautiful and quality stuff (a Green Toys tea set that I bought for Ru a couple of years or so ago got taken outside so they could have  tea party with water and then got left outside since is still looking in very good nick, could probably scrub it up and have it looking more or less new) that gets played with constantly because it looks good and doesn't break when you look at it.  Just wish I had more money.

So turns out our NSA spyware proxy may actually be Skype.

The intermittent http losses had been getting closer and closer together and it eventually got to the point where I lost it twice in a day.  I was in the middle of burning Debian CDs (to reinstall the kids laptops, because apparently using the 7.1 cds I have and upgrading is not as good as downloading the 7.2 cds and using them) and quietly simmering about having to do a clean reinstall, when Josh came up with the brilliant idea to kill Skype because apparently Skype uses port 80.

I killed Skype and coincidentally just after it shut down http was working normally again.

Josh said everything should work fine now if I fired Skype back up again.

I finally got basic modelling in Blender.

All I needed was to find where the subdivision tool was hidden.

I prefer having a menu on my right as I use a Cintiq and find it quicker to access stuff I don't know keyboard shortcuts for (or that don't have keyboard shortcuts) if the menu is over to the right.  I can move it in preferences in Lightwave.

Her birthday was actually at the beginning of the month, and she recently found a birthday buddy.  I'm just slow and have been busy, hence the late celebration post.

I got told once (not directly, the person doing the telling was telling it on a forum) that personalities are more or less developed by the age of 7 or something to that effect.  If this is the case, then my daughter has my nasty streak which is not something I wanted her to inherit, but fortunately she is a lot nicer than I am most of the time.

I have often described her to others as my "perfect" child (local society's often idiot notion of "perfect", seeing as I use the word to indicate how happy or annoyed I am with something), as she is really cruisy, easygoing, compliant, helpful and frighteningly mature and responsible for someone that age.

It started sometime after I upgraded to Mavericks (it was 10.9.something by the time I got around to it, and I really do quite enjoy using it) and before the next update.  I would be poking around on the internet and seemingly at random, everything would just stop working.

Everything that wasn't going over http would work fine (ssh on terminal, im programs, Tor).

I initially assumed there was something wrong with dns so tried using OpenDNS instead of my isp, but that didn't fix it.

I tried flushing dns caches every way I found relevant to OSX 10.8 and 10.9 on the internet, but that didn't fix it.

I figured there might be something wrong with the routing maybe as when I tracerouted any given site, I would get stuck somewhere inside hwng.net or bandcon.com (which appear to be the same thing), however Tor worked.

One 3d App to rule them all

I had Quadrapop over earlier today and she was looking over my shoulder and critting the work I'd done on Red's hands so far.  I am aware the hand is the wrong shape and was planning on fixing that in Lightwave where I have poly modelling tools but after receiving the second degree I got motivated enough to attempt it in Sculptris (after firing up Lightwave and fixing the hands on the base models and putting the legs in Da Vinci pose while I was about it).

Quadrapop had in the meantime headed home so I dropped the following image into a group chat blaming her for the kick up the arse: 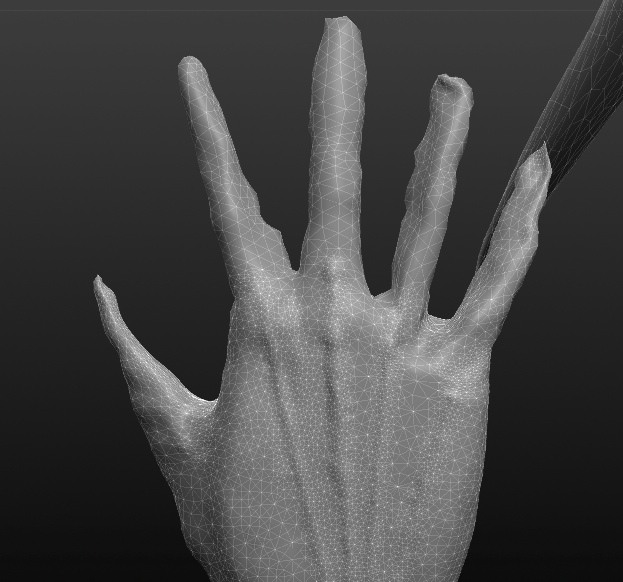 Late night lojban lesson with the stubborn 4yo: