As is normal for us, November kind of slowly ground to a halt as there was a rather large thing to take care of and then we focused hard on/got roped into helping with end of year stuff, and December was pretty much a write-off.

15yo worked through a Netflix documentary series about F1 racing as her boyfriend is really into it so she was trying to learn a little more about it.  I watched a couple of episodes with her and she told me a bit about the boyfriend's favourite team and favourite driver and a few of the other drivers, saying that now she at least knew who he was talking about when he was excitedly babbling about them like they were friends she should know.  We also marvelled at the pit crews basically disassembling and reassembling a car in seconds.

13yo decided he wanted to try bass guitar lessons to see if he could get faster progress in his quest to learn bass.  His DnD campaign wound up successfully and it sounds like everyone had a good time, though he told me afterwards that he didn't think DMing was really his thing, but he had tried it to see what it was like and also because he just really wanted to play DnD but no one was running games he could get into.  He has previously asked me to run a game for him but I really hate the DnD system (more specifically I hate levels and xp, and I'm really not sure what I have against AC but when I was helping 13yo practise running games it irked me endlessly).

The group did a poll (they have a group chat for DnD) and apparently 17yo got voted to run the next game.  He started writing some notes and then stuff and more stuff and silly season happened and I don't think he's resumed yet.

15yo became old enough to get her Ls and we had a much quicker time of it than when we went with 17yo to get his as the lines were moving a lot better.  Unlike 17yo who has been loving driving manual, 15yo didn't have a good time the first time she tried and hasn't tried since, though she is still intending on learning it so she can get her manual license, and has been back to driving my car (which is an auto).

15yo was also asked to help with the KMart Wishing Tree Appeal, which involved dressing up as Elsa from *Frozen* and hanging out with a bunch of other volunteers also dressed up as characters and elves and things and interacting with the public. 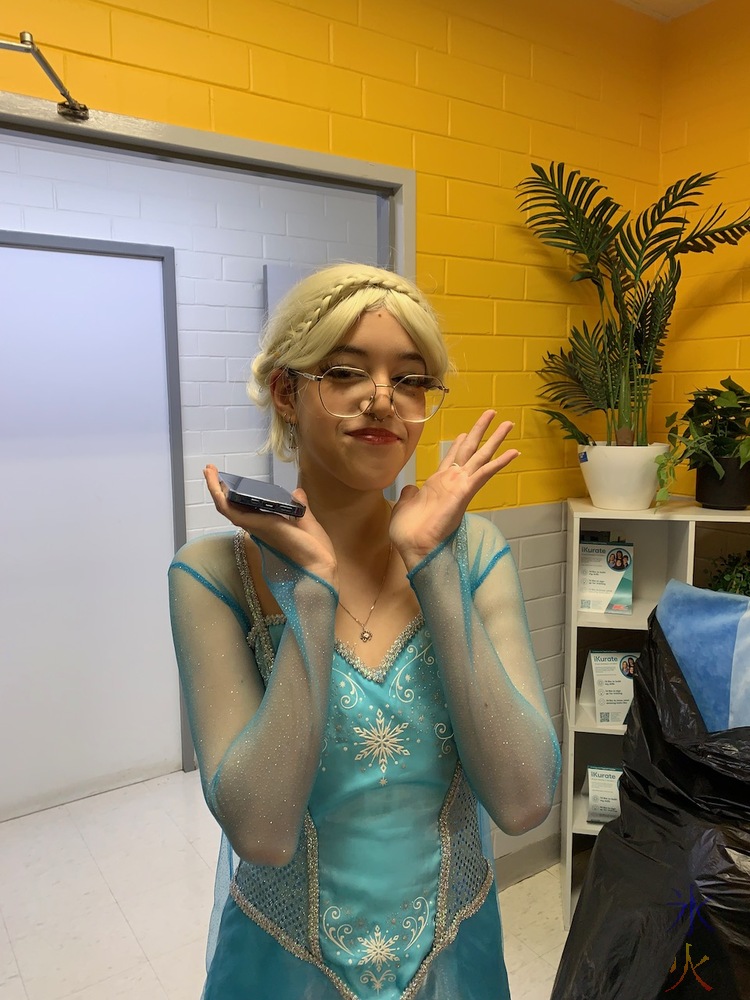 There was a moment of confusion as she had been asked to do makeup (which she did) but when we got there they gave her the head to wear.  That got sorted out really quickly and they handed her the wig instead.

Probably just as well as the kids loved her, and we don't think they would have loved her quite as much or at all if she had been wearing the head. 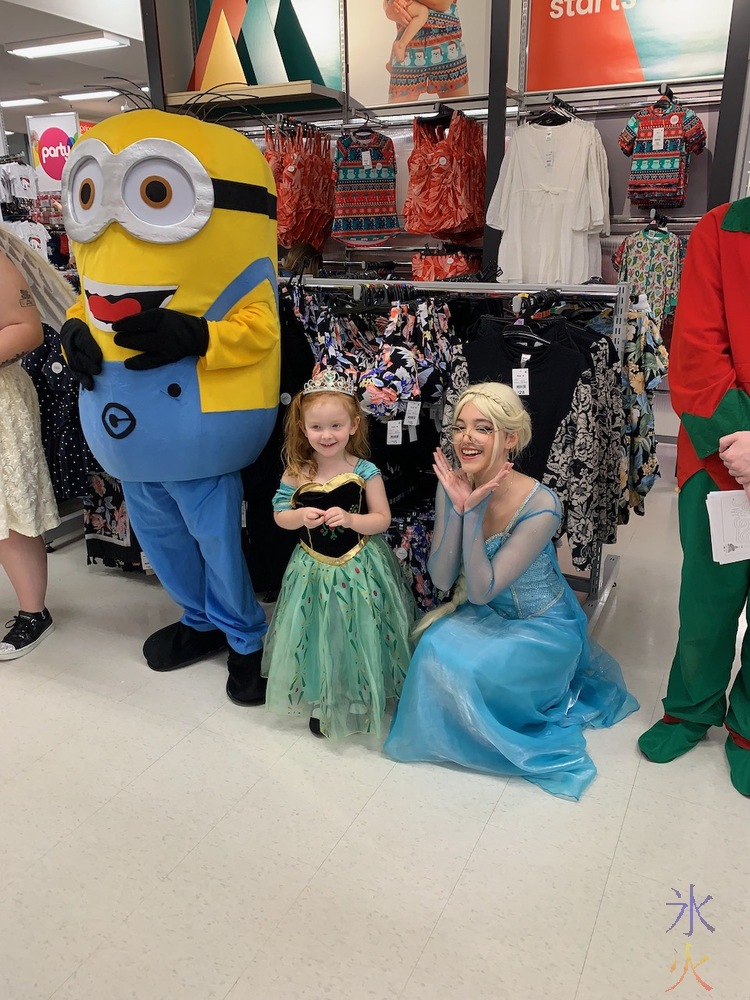 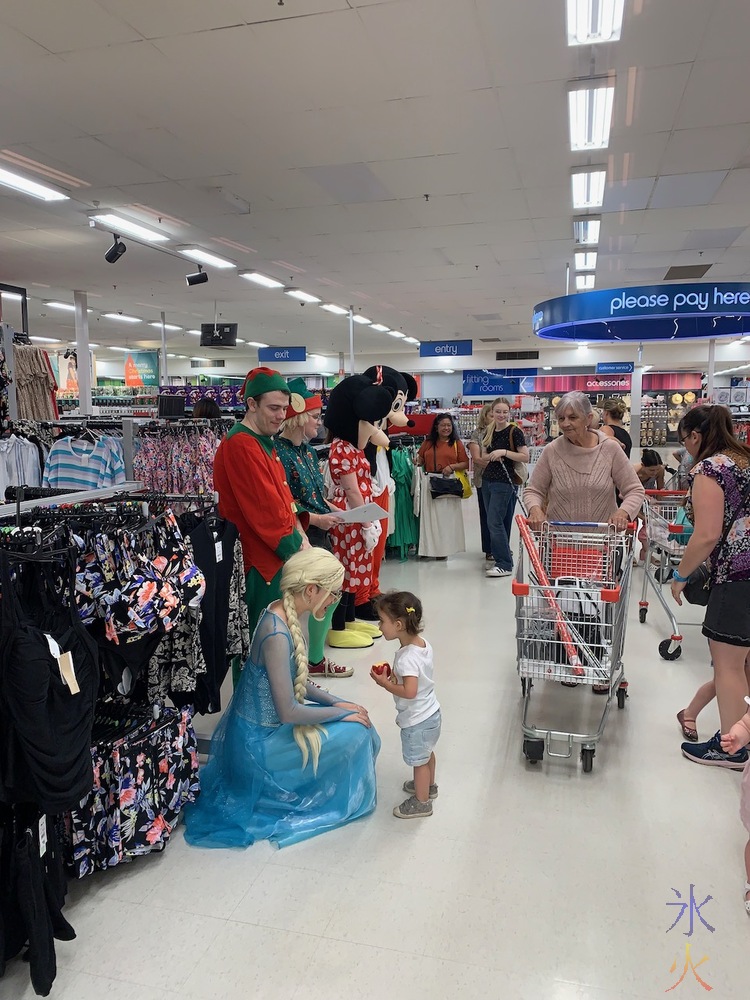 13yo continued on the hospitality path, contributing some whisky and honey soy wings to go with some leftover baked potato for dinner one night. 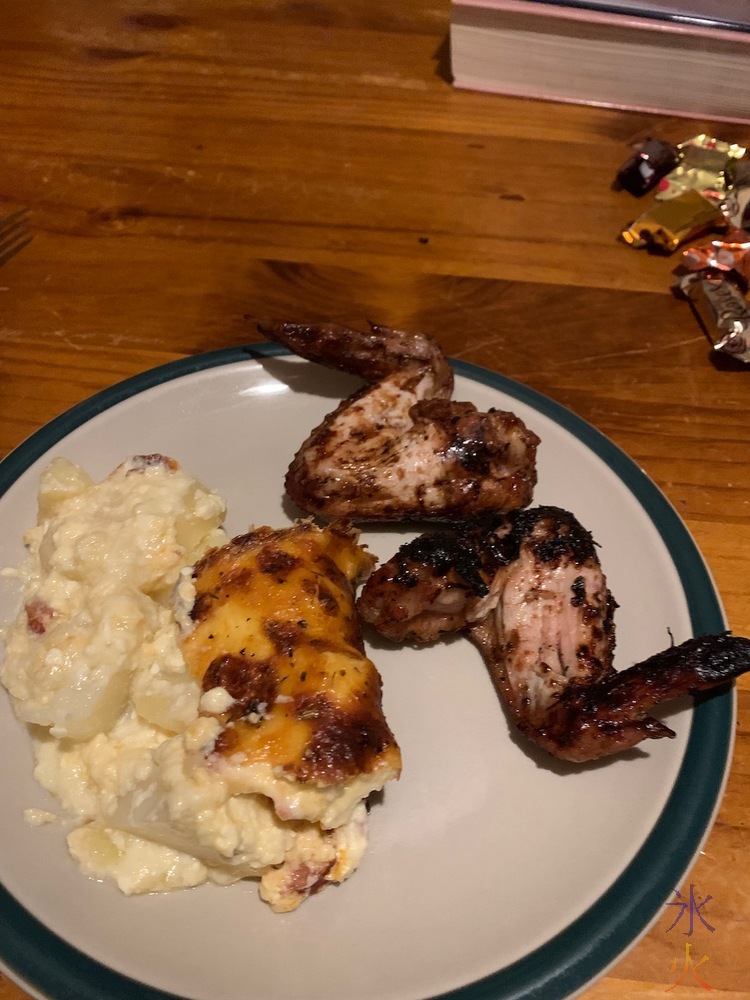 I tried to get 13yo into TAFE for next year as I had been told that there were 14yos doing the course that 17yo is doing but apparently that information was incorrect and he has to wait til the year he turns 15.  He was very grumpy, we had yet another fight about him going to school (I'm not even sure what the fights were about aside from him seeming adamant that I have to be the one dealing with things, he is absolutely allowed to go if he wants, and I am absolutely not dealing with it).

I told him he should try homeschool group again for a term and if he really didn't like it and was that desperate to go to school then he could start in Term 2.  He grumblingly agreed and I continued wondering how he was going to cope with school when he hated how homeschool group classes were run.

Then it finally entered my thick skull that I should have just modified his program after it became clear that he was really interested in the bartending stuff.  I've always built their programs around whatever their current interests and obsessions are (which often requires switching things up massively not quite on the fly but feels like it's not that far off), but due to the number of serious things that had been happening in what feels like a relatively short space of time the blatantly obvious thing had somehow escaped my attention.

I told him I'd build his 2023 year around bartending and alcohol and that there would be assignments each month.  Most of the stuff he should already know given the amount of research he's done over last year, it will just be a case of writing it down and turning in the assignments on time.  He was immediately interested.

Around the same time, 15yo lamented about not staying in school long enough to do Year 9 NAPLAN as she had looked at the TAFE course she wanted to do again and realised she could have gotten in with a NAPLAN score.  On looking I noticed that she could also get in with an OLNA score (which is done in year 10-12 if Year 9 NAPLAN wasn't done/passed) and homeschoolers can do both, so I said I would ask our moderator about it and organise for her to get it done (probably at the local high school as the supervisor course looks like a bit of effort for once, maybe twice that I would be doing this) and then she should theoretically be able to use the score to get into her course.

The kids (with some help from me) bought J a Nutribullet (we needed a new blender anyway and more importantly they wanted to use it XD) and salt and pepper shakers (he'd been looking for some at op shops for a while, but 15yo wouldn't let him buy any of the ones he found as he usually only found one which would result in a mismatched pair and there are too many people in the house with ocd to allow that) for Christmas.  The kids have used it more often than J, usually to make concoctions such as this "witch's potion" that 17yo threw together from milk and/or yoghurt and blackberries and possibly mulberries from the garden. 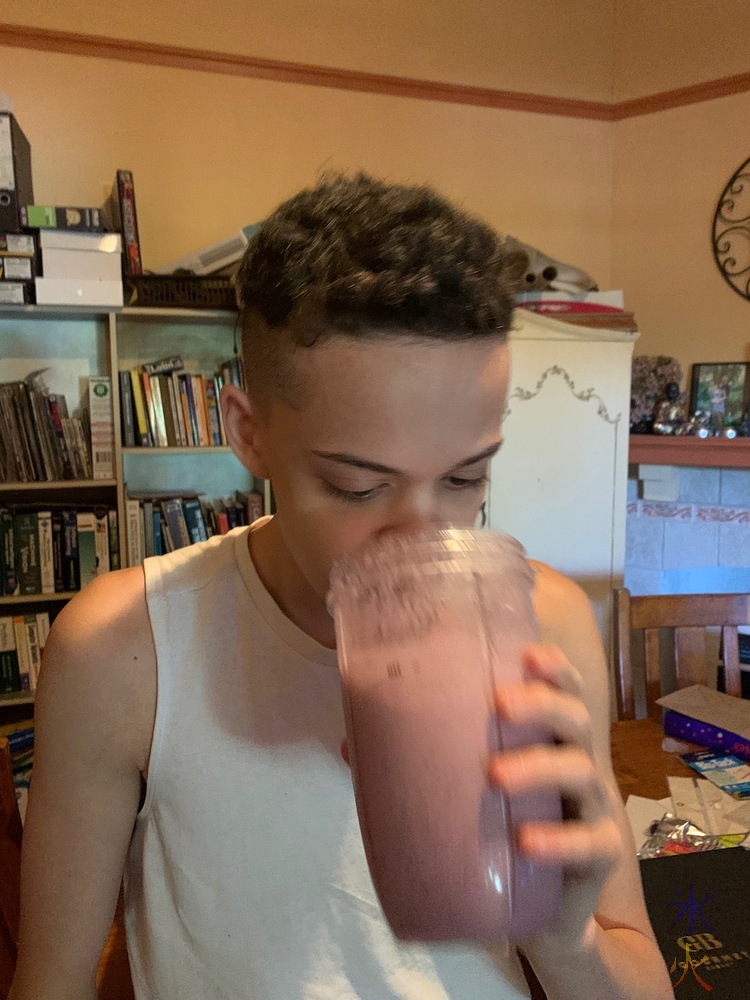 We had a bit of logistical issues going up to Jurien Bay this year and asked the outlaws (who were going up a day before us to prep the house) to take up an esky of supplies for us as it wasn't going to fit in our car with three teenagers in the back and the dog in the boot.  We also said any kids that wanted to go up a day early could do so and all of them wanted to go up a day early, so we sent the kids to the outlaws place to go with them and went back via my aunty's as I needed to try to take some better photos of old photos for sibling dearest's present for the parents.

We ended up leaving her house with an exercise machine that had apparently been under her bed for the last three years as it's quite large and she didn't want to leave it up and didn't want to keep disassembling and reassembling it.  This got left temporarily in 17yo's room while we packed and took our first road trip without kids in eighteen years.

The kids apparently had a nice time up in Jurien, spending their first day at the beach and helping the outlaws set the house up.

15yo set the tables for Christmas lunch 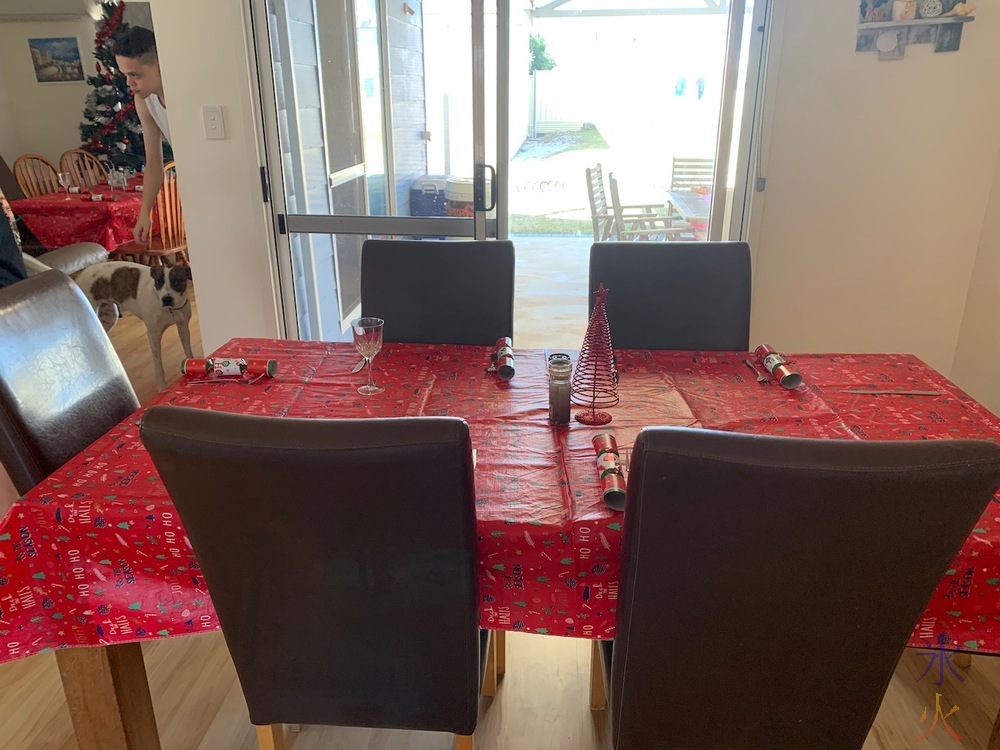 and got upset because the napkins didn't match the tablecloths and there weren't enough of the same type of napkins for each table.  It was what was had and nobody minded in the end.

My mother in law was a bit confused in her frenetic activity and would occasionally ask one child or another to help with something only to immediately end up doing it herself or hand it to a different child than the one she had named, which is how I ended up getting photos of both 13yo and 15yo helping to make custard (she asked one of them to help but handed it to the other and one that was supposed to be doing it piped up in confusion so like they were tiny children again she said they could "have a turn too"). 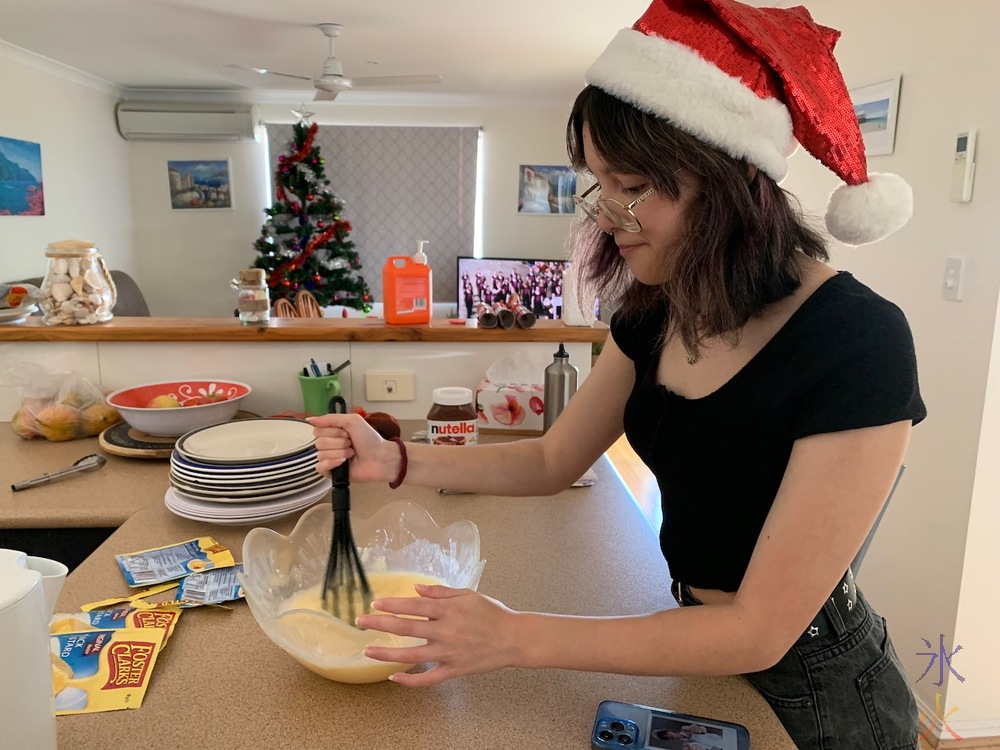 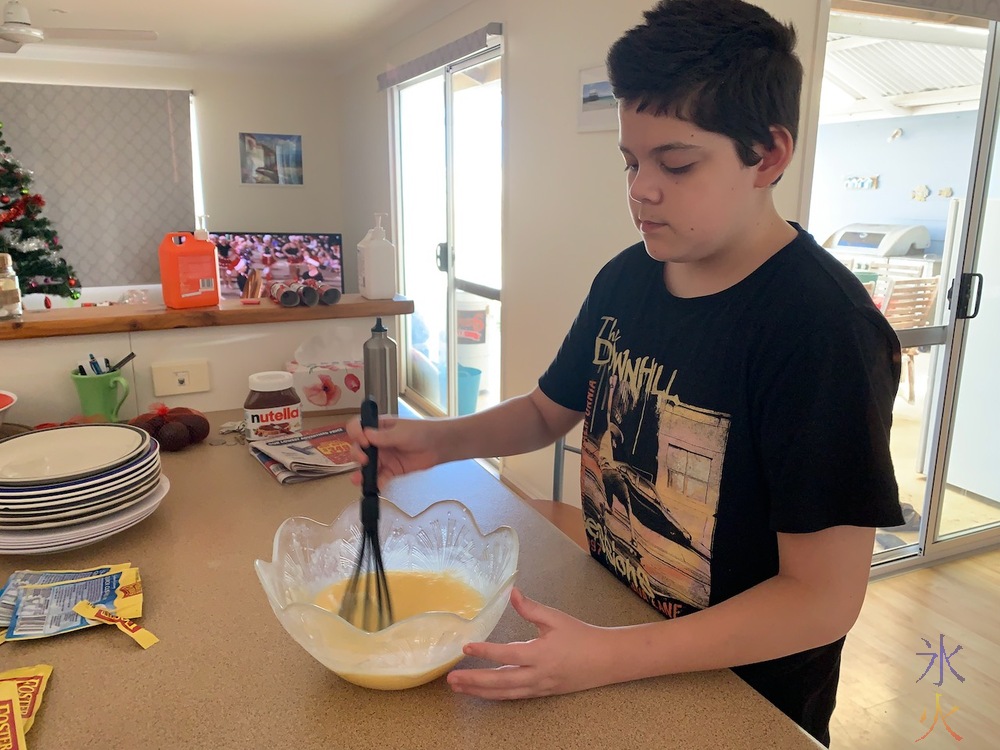 Mother in law had bought the kids some non-alcoholic wine and the usual shenanigans happened where the boys put on a parody of snooty-as-possible, going on about the aroma and body of the not-wine and 13yo gave 17yo a hard time for holding the glass wrong (you're apparently supposed to hold it by the stem so that body temperature doesn't affect the temperature of the drink or something to that effect, however with the type of glass 17yo had there wasn't much stem to hold). 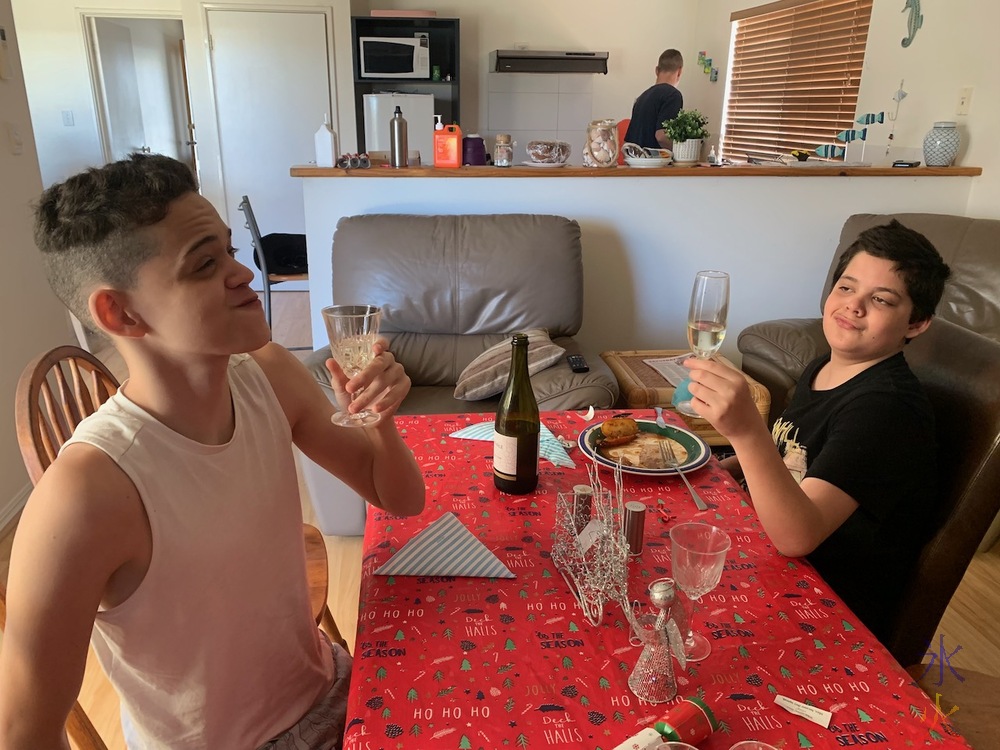 And then put on a comedic drama. I don't think they were intending to put on an improv play as such but that's more or less what ended up happening.

15yo made us pull over at the foreshore on the way home from a gathering we went to in the afternoon as she wanted to take a photo of the Christmas sunset. 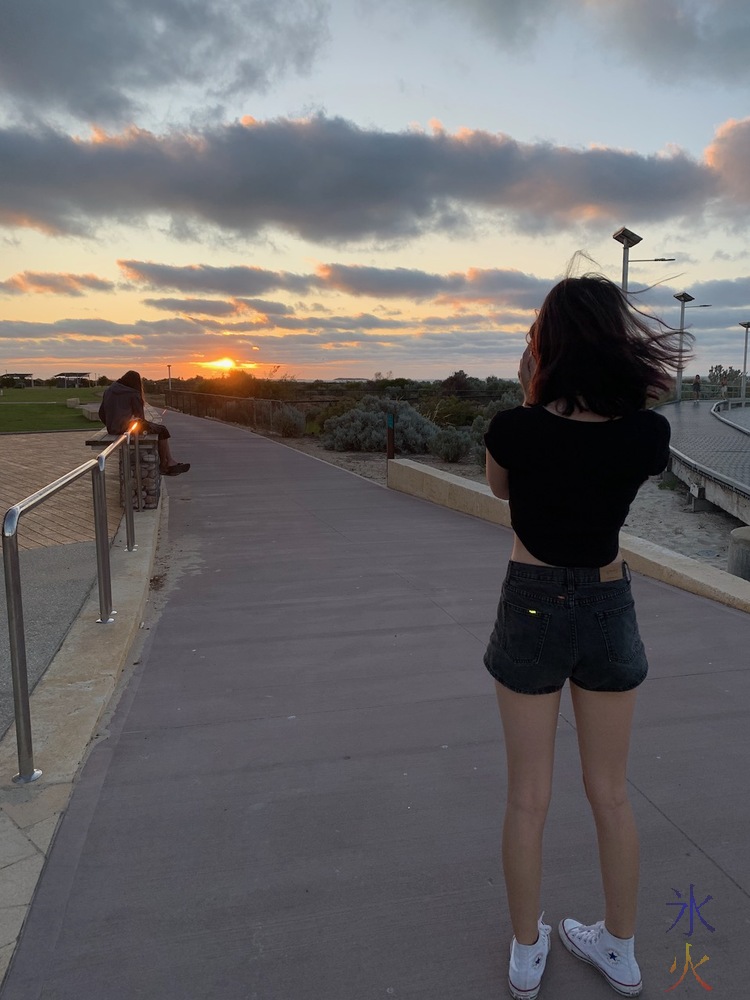 She regularly takes photos of sunsets and there have been a few occasions where she's dragged me out to go take photos of the moon and/or stars (her phone does a decent job at night time photography). 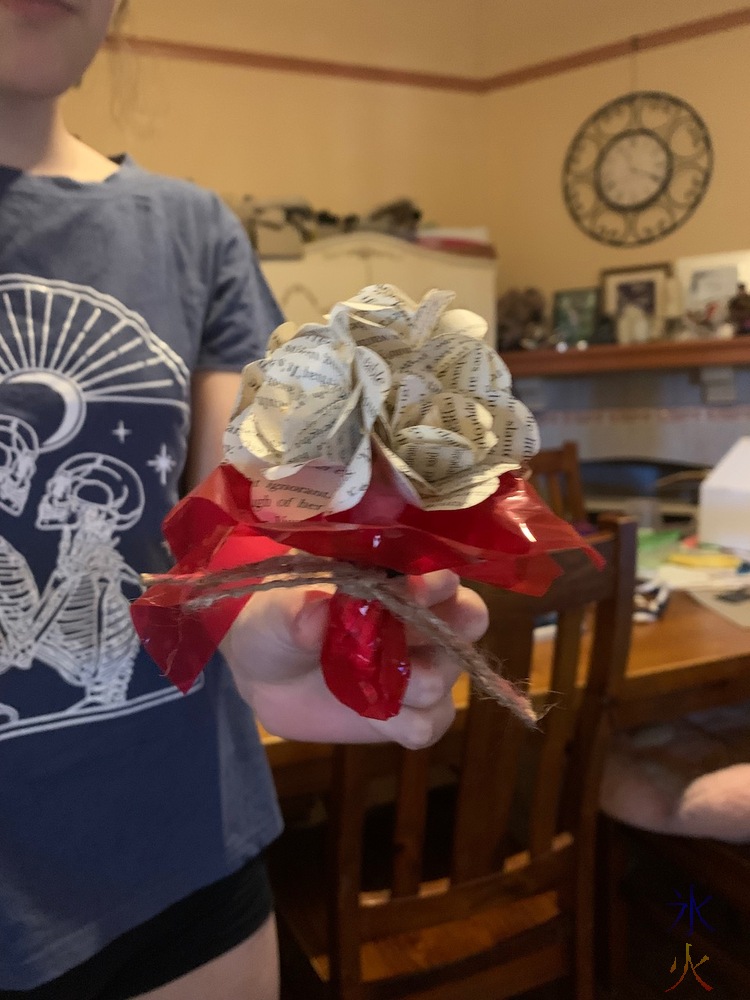 and 13yo continuing to practice his bartending skills.  He pours a great drink and somewhat laments the fact that he can't sample his wares for another two years (I let the kids have sips of anything we're having at 16 if they want, they're still not allowed to drink til 18).

He was especially happy on New Year's Eve as he got to make me three drinks instead of the usual 0-1.  This one which was made with Midori and the juice of an unripe lemon (our tree is fruiting but none of them are ready yet) was particularly good. 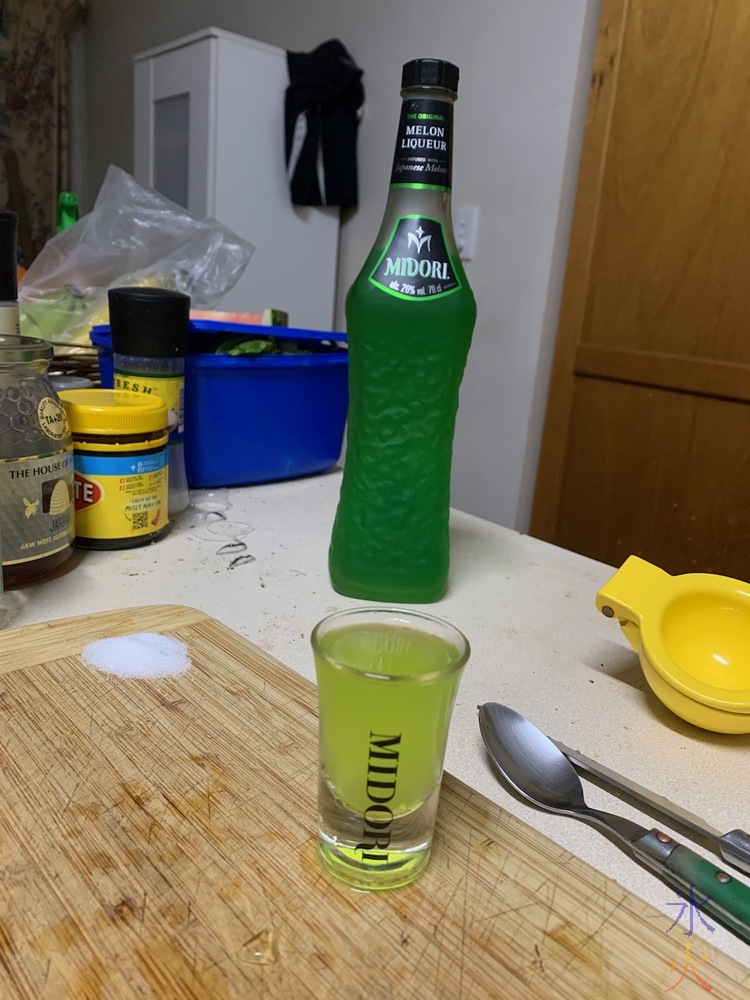 We stayed up til midnight and 15yo did her usual New Year Aerial to ring in the new year.  She's been doing one since 2019 when she first learned how to do aerials and they've been improving each year.  Unfortunately we haven't actually been taking videos of them (I was very sure she'd sent me a video of one from a new year she spent at a friend's place but could not find it, and also very sure I had taken one from when she did one the last time we were on Christmas Island, but apparently not) so we decided to start now.