January Progblog #1: first one for the year

And I very nearly missed it (okay technically I did miss it coz it's now after midnight but shhh x_x) because I'm trying to get used to a modified schedule and there was a bit of stuff on today and also the usual not being sure if I should bother postinng because I don't feel like I've made enough progress.

But first one of the year and I am trying to get back into the habit of weekly progblogs.

I actually didn't get to do much art last week as I spent most of it rejigging schedules and the Obsidian vault I use as a journal/organiser/thing (I'm still in the middle of modifications, it's a work in progress and changes whenever I discover a new process or shiny or they put in something new) and trying to sort out and organise things for this year, or at least first term.

Then I hit the games room hard as it was a thing that kind of needed doing for three years. I did start but then stopped because I had better things to do but after arguing with J about it I finally finished the bulk of it enough that we could put in an exercise machine that we acquired from my godmother just before Christmas (she had bought it ages ago because she thought it would help her get more exercise, but it's quite long and she doesn't have a large house and didn't want to leave it set up and also didn't want to be disassembling and reassembling so it ended up living under her bed for three years). There is one crate of stuff that J can take to an opshop whenever he feels like it, and another two that has pieces missing that I will need to look for in two other locations in the house.

I think I was doing covert feathers when I left off last time, I finished the front ones and the alula feathers off and am still having huge angsts about whether the feathers are positioned correctly. 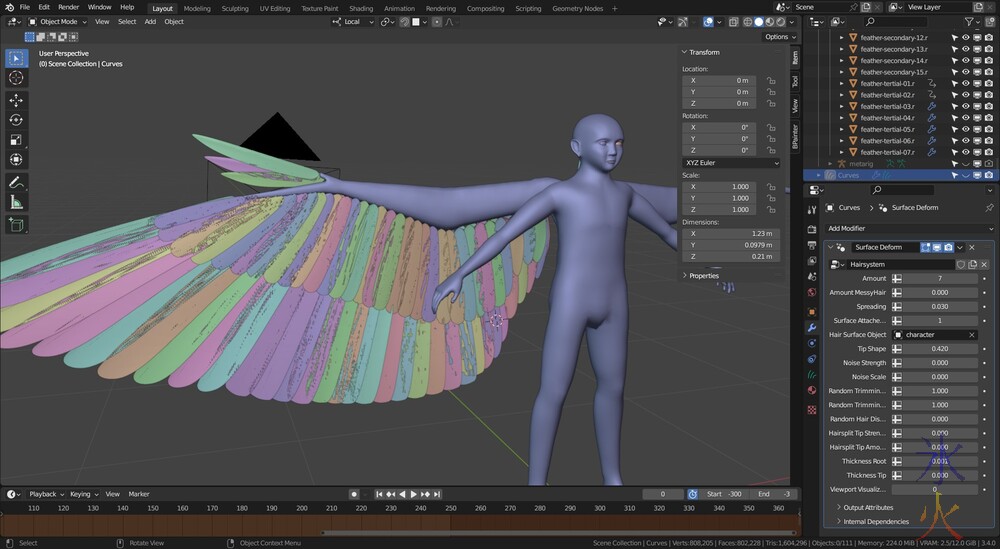 I do very clearly remembering this happening the first time I did the wings too.

I have since started on the rest of the feathers using the hair system as most of it is down (though I'm hoping that the larger feathers over the coverts will work out as I don't really want to position yet more bloody polyfeathers, though at least there's a prayer that I can just array these ones if I really had to). 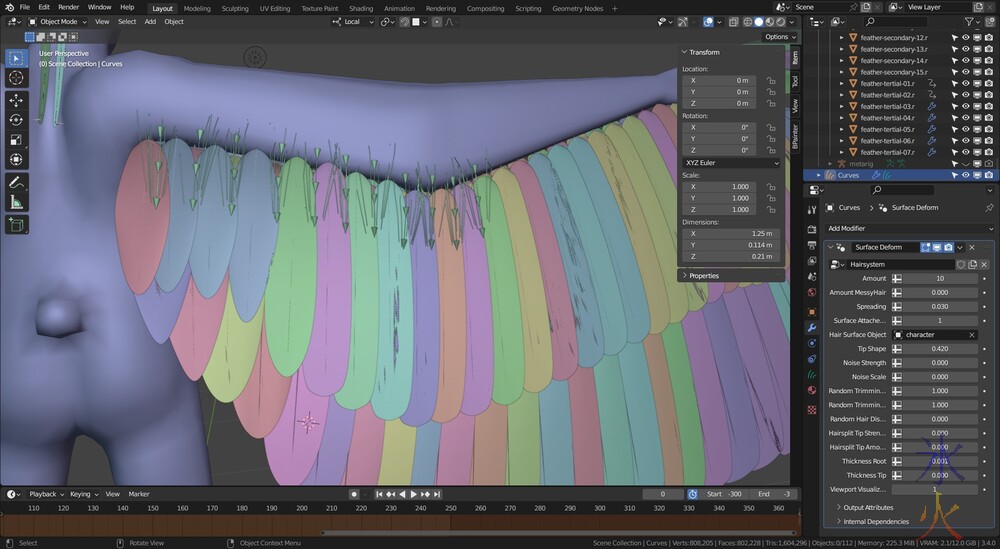 I'm currently undecided whether I will risk trying to just put everything on the one system or whether I make it heavy by keeping this one (with the feathers placed carefully) separate from the downy one where I can probably be slightly more haphazard.  It will probably be the latter because that's easier to modify/control if I need to.

After nutting that out it will be copying the feathers to the other side (probably as linked duplicates, the hair/down is in X-Mirror already) and then rigging may be a minor pain in the system as I remember having to rig the feathers so that they would fold in an aesthetically pleasing fashion.

I'm going to try stealing the wings of the bird rig that ships with Rigify these days (I don't think it existed the first time I did this) and see if that does what I want, otherwise I did it before I can figure out how to do it again.