I don't think I've ever had a last month of the year run according to any semblance of a plan and that may or may not have something to do with my persistent delusion that I can somehow continue doing the same thing plus all the extra time consuming things in the same amount of time.

The end of year display was great, and I had the "brilliant" idea to film the whole thing (I did get permission from the head coach to do it first) and edit them all together.

My camera work (the camera was my phone) was shaky and awful and the position I was in was the best I could do at the time but definitely was not the best.  But to get better I'd need a multiple camera setup in some interesting locations and I don't have multiple cameras.  The sound in the recording was also muddy so I had to overlay some tracks.

And then because I'm a bit extra I made a rather over the top intro and did my usual outtro and sent the link off to the two senior coaches.  They seemed to like it so yay?

In the meantime I managed to finally finish Zara (I think, I have yet to test the rigs properly but I figured I'll risk doing that in another anim down the line, I have plans).  The last thing to do was the head feathers.

I still prefer the look of hair feathers but this does not suck, especially after I figured out how to get that barely discernible barb pattern. 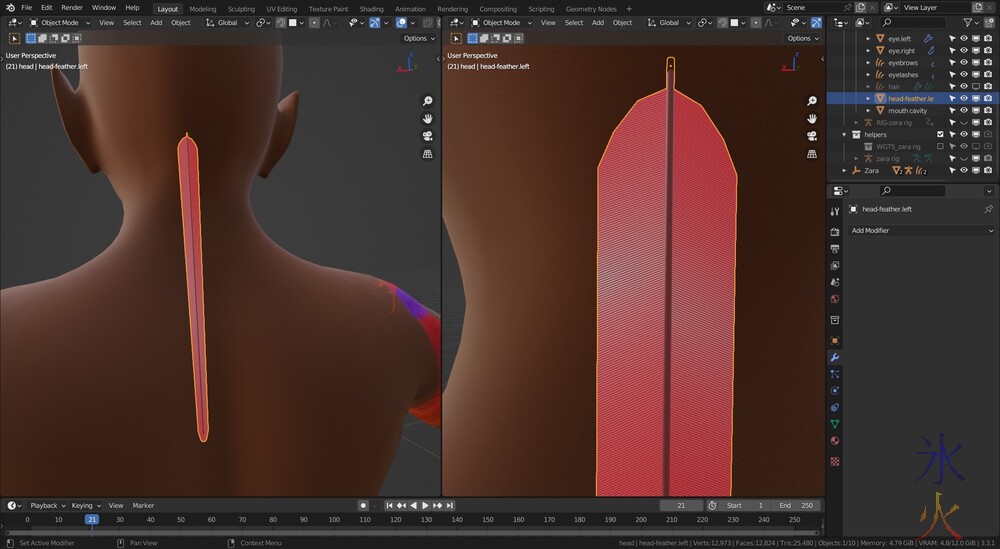 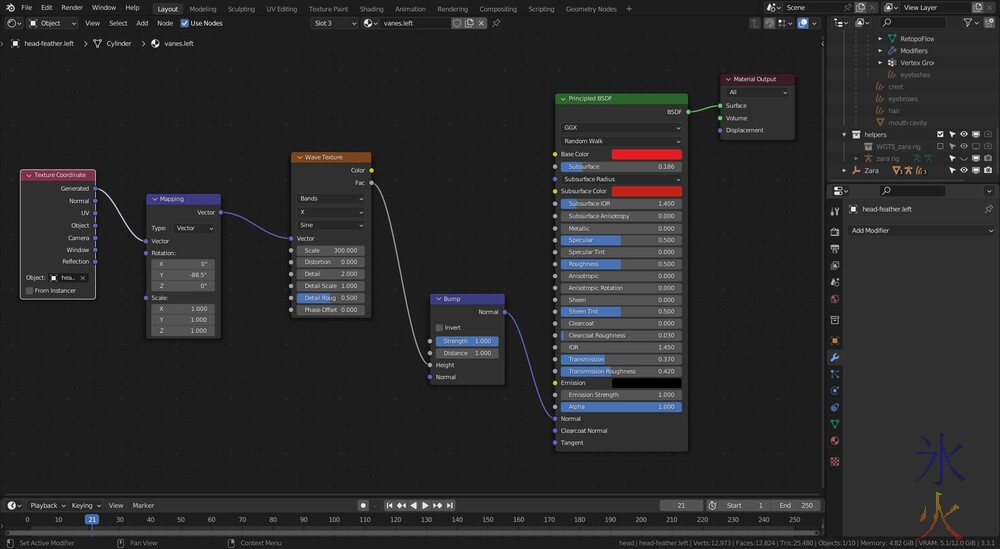 Each half of the feather needed its own material as the diagonal needed to slant in a different direction. 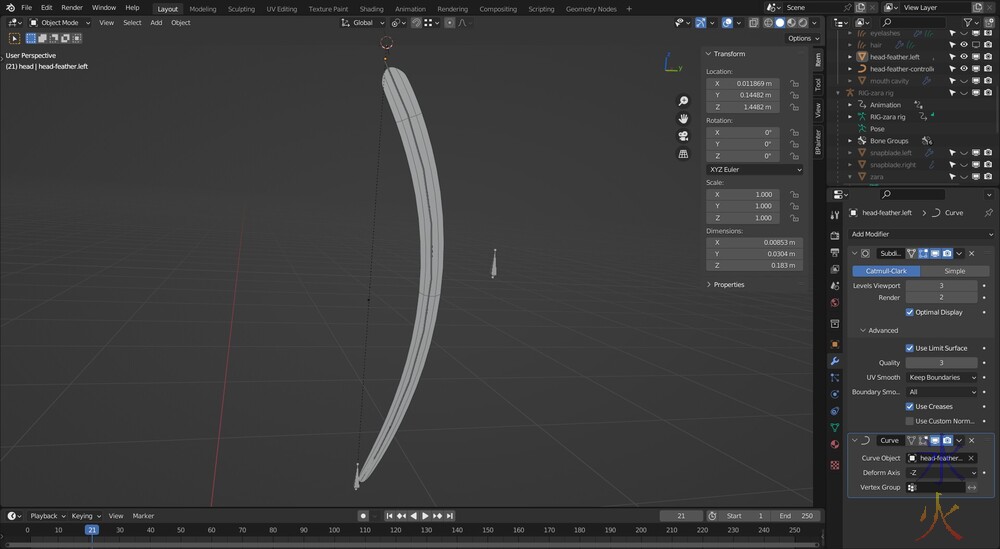 The polygon feathers don't look quite as awful as I remember them looking.  That Principled BSDF node does a lot of heavy lifting, as it was the mapping (I managed to do it procedurally this time, in the past it was an image map) and trying to mix nodes and generally completely failing at getting decent translucency that made it bleh before. 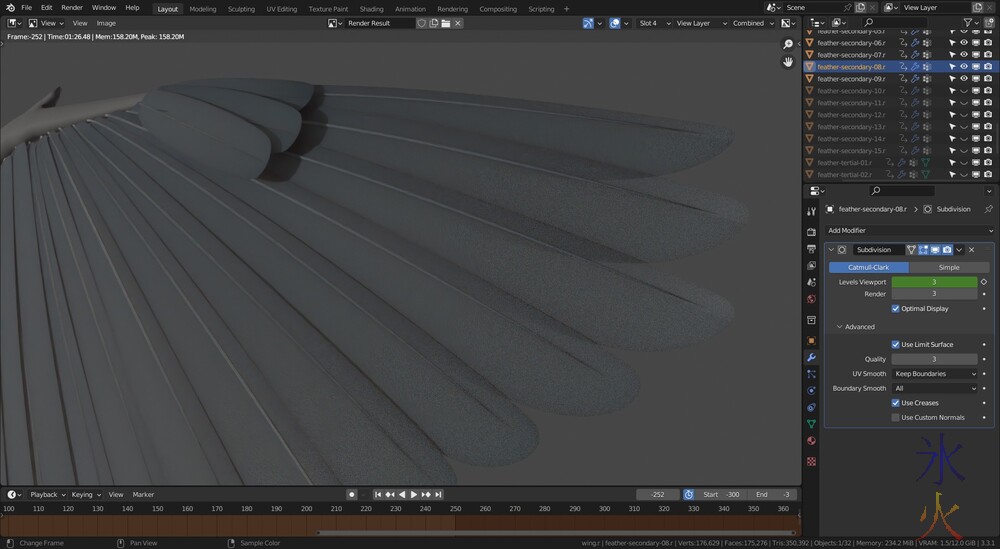 I love random colours.  Obviously this just makes it a lot easier to see what I'm  doing. 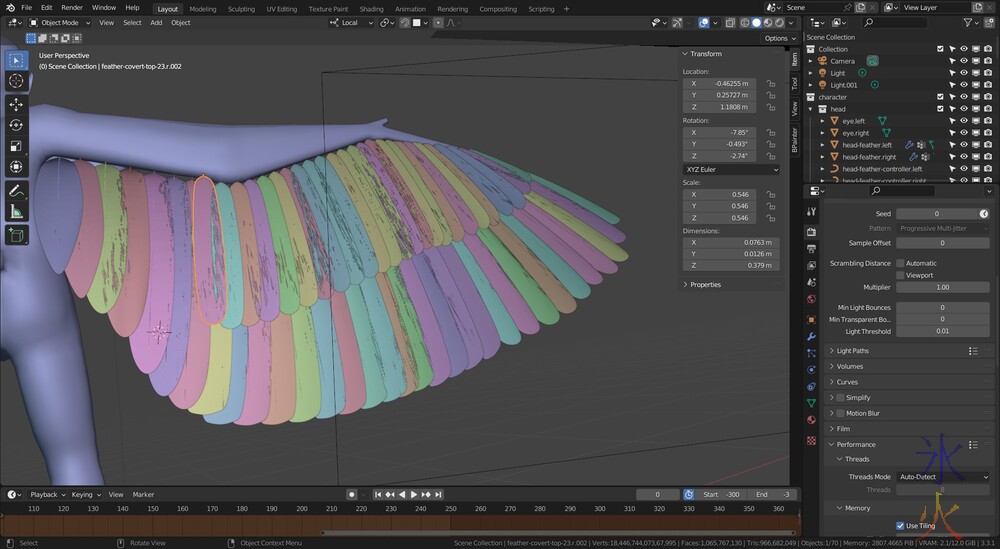 Currently each feather is a discrete object stored in a collection (wing.r in this case).  The current plan is finish all the poly feathers, link dup them for the left wing, do the tail poly feathers and then make copies to join either into their own objects or more likely into the same object as the body.

After that it's sorting out new wing and tail rigs (am going to experiment and see if I can steal the wings from the bird metarig) and then the last one is the Dragonkin base model (the biggest challenges there are the wing membranes and the freaking prehensile tail rig aaaaaaaahhhhhhhhhhhhh) and then I can go back to actually building stuff that I need.