This month was just as action packed as the previous one. There was one more excursion with the parents, extended family and Up Close and Local Tours but minus 17yo (who was feeling a bit run down and decided to play it paranoid) to Bunbury, where we stopped by a little cafe with its own little adorably put together food garden. 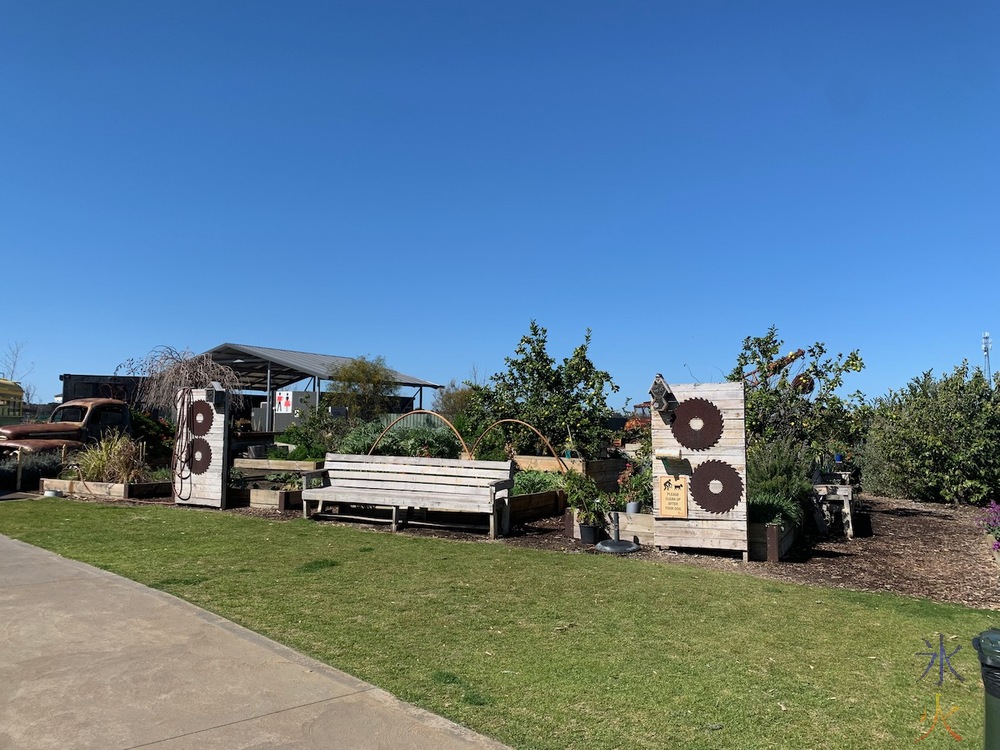 After that it was off to the Dolphin Discovery Centre. 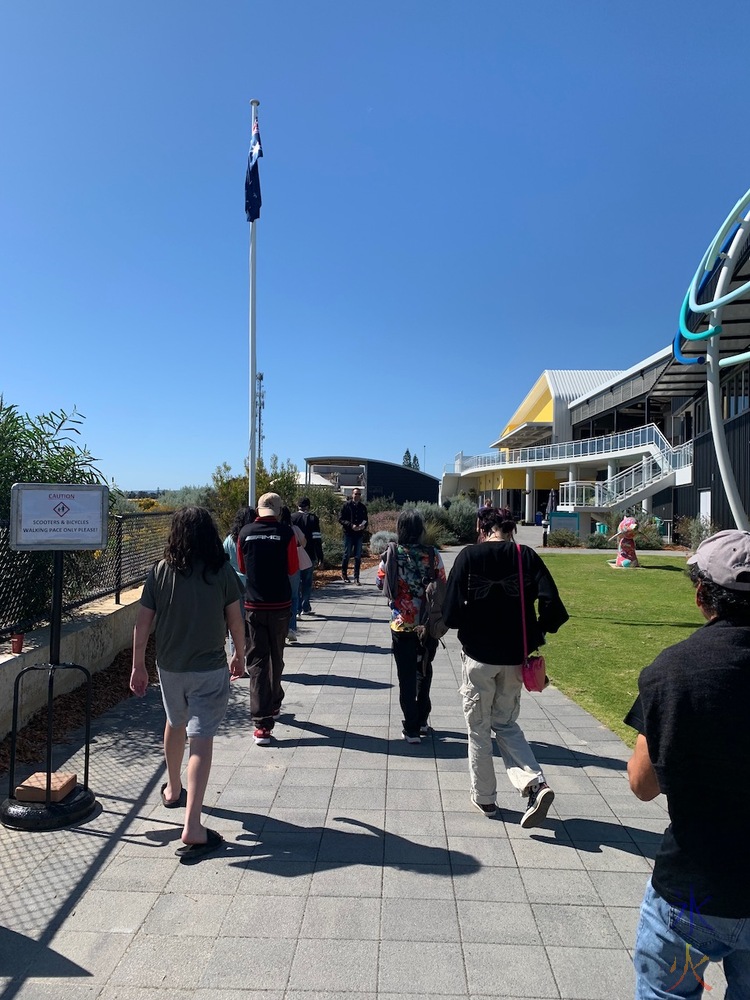 We got this nice lady for a tour guide and she took us around their little aquarium setup and explained a bit about the sealife found in the tanks and where they would normally be found in the ocean.

This pufferfish was a favourite with everyone, and everyone but me wanted to see it puff up, but it was in a good mood today. 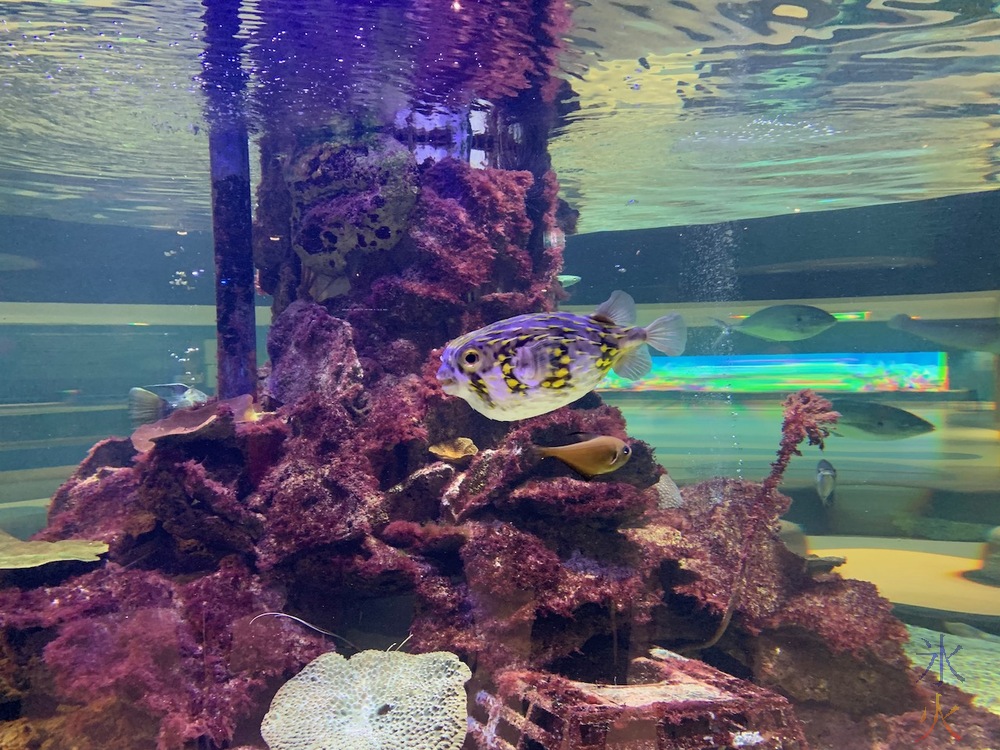 There was a dolphin skeleton on display along with a preserved stillborn dolphin in a jar. 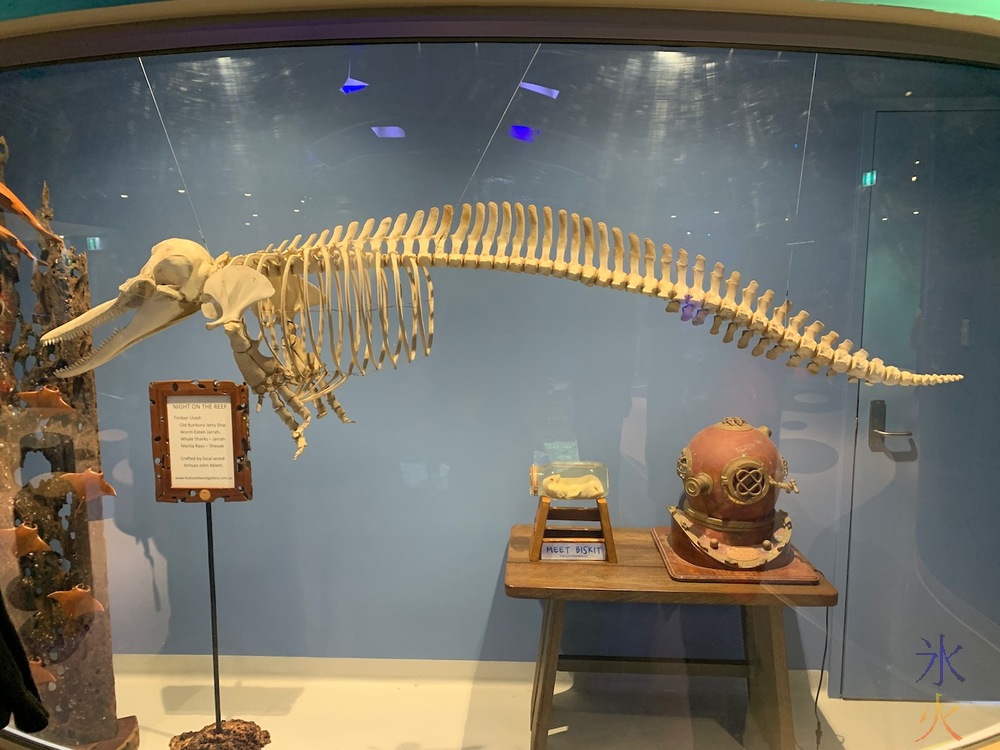 13yo and I agreed that dolphins look really friendly until you realise their teeth are actually terrifying.

Further in there was a digital saltwater aquarium where people could colour in fish and scan them in.  From the size of the furniture the activity was aimed at small kids but that didn't stop anyone. Despite how he makes it look here, 13yo does actually know how to hold a pencil. 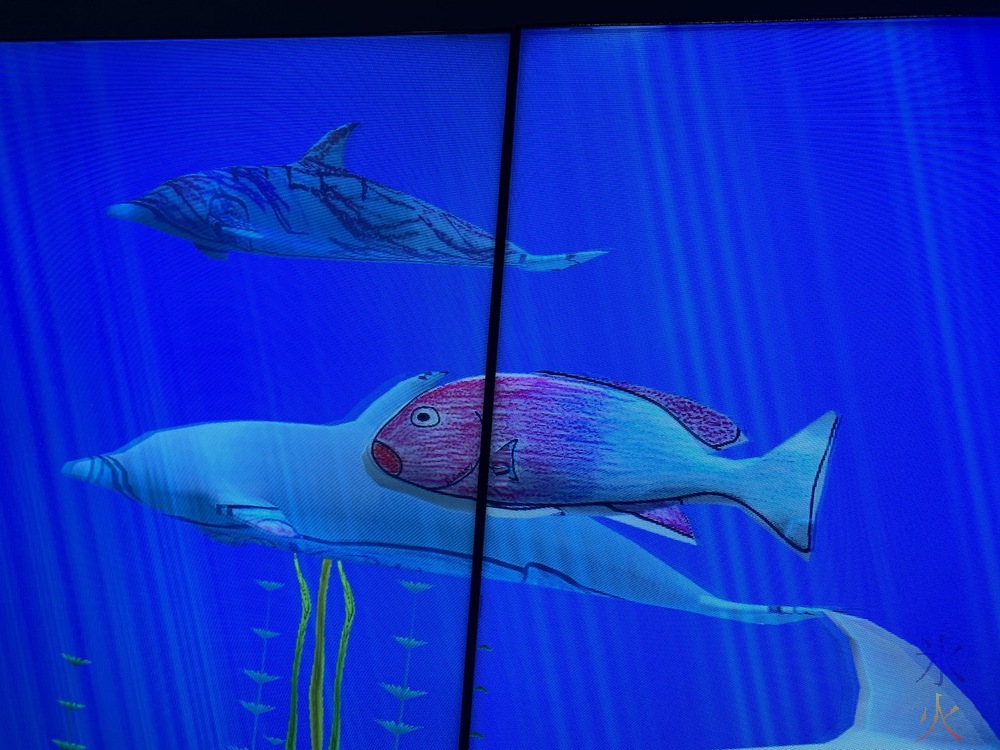 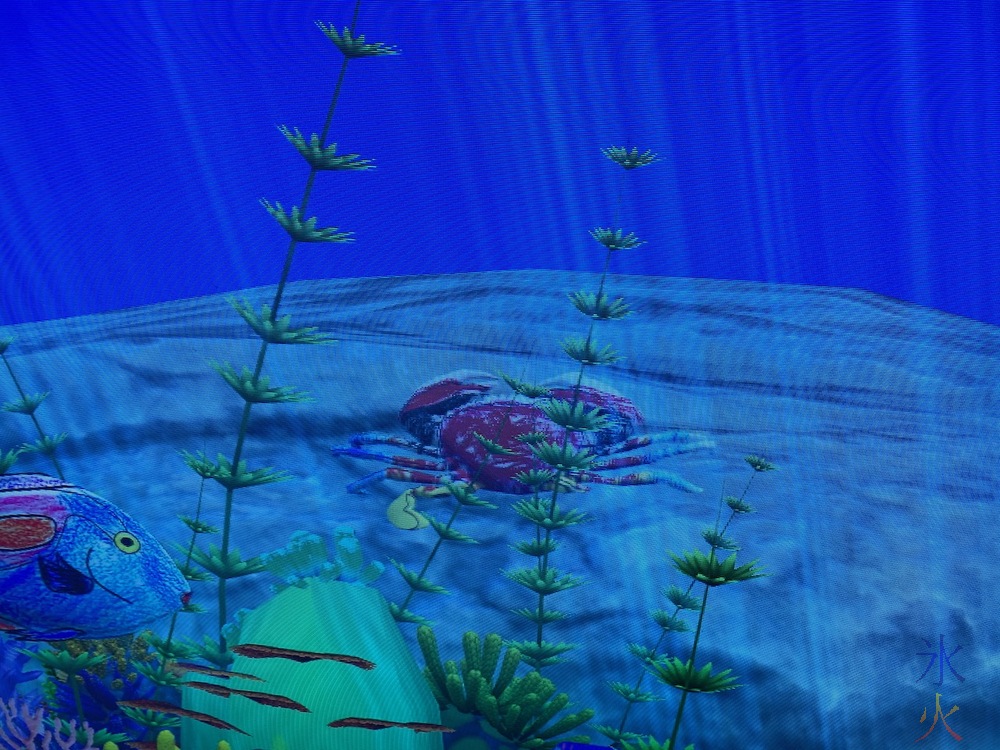 There was a tank occupied by a pair of octopi. It's amazing what they can squish their bodies into.

We lucked out and got taken on a quick behind the scenes tour where they showed us where and how some of the animals they had were rehabilitated before being popped into an aquarium or released back into the wild.

Waterbaby 2 of course wanted to head down to the ocean, promising that he wouldn't "accidentally" fall into the frigid water as we were on the way out. 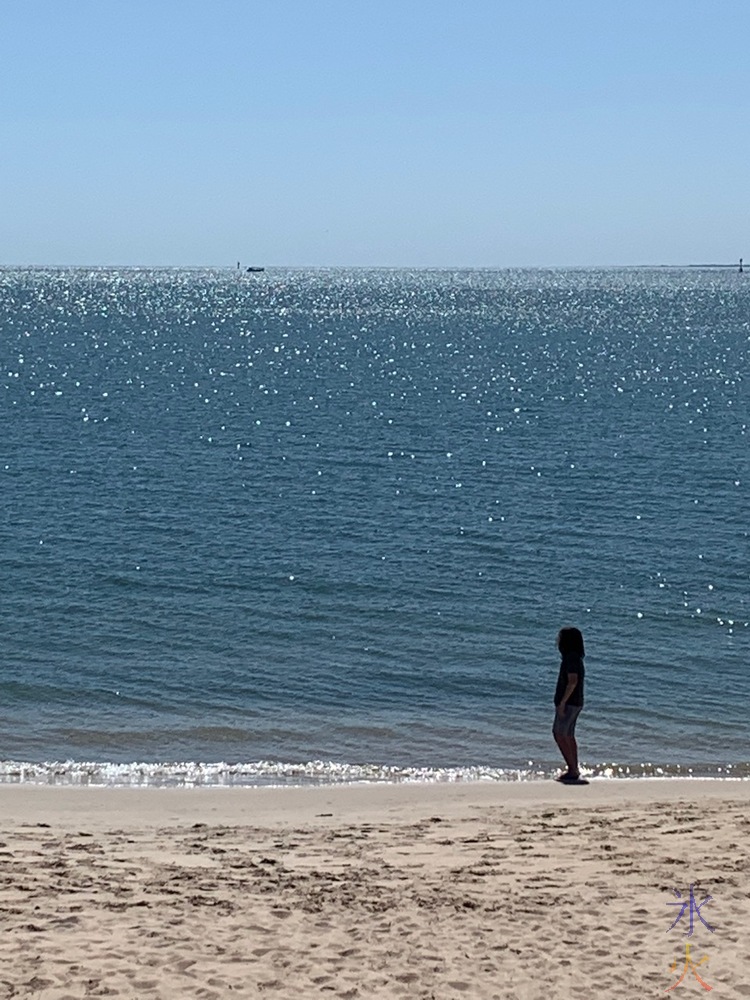 Apparently checking out tourist traps gift shops is a must before leaving anywhere, but on the bright side I did find an ammonite for @ammonite. Next we visited this dam which has the world's largest mural painted on it. Half the group including 13yo and I had an interesting discussion surrounding the mechanics of painting a mural that large.

We had a few days off after the craziness of all the excursions in a short space of time, and then 15yo said that she wanted to drop out of TAFE because it "made her feel dumb".  Tried once more explaining that institutionalised learning doesn't really work for any of them and it's not that she's dumb, but especially with the now diagnosed learning difficulty, it's that the delivery methods they use in institutions isn't the most efficient one for her.

We did try a modified learning plan with help from the very helpful student support services, but in the end she pulled out with a vague idea of maybe trying again either next year if she feels up to it or as an adult.

17yo got his Ls and ended up dealing with part of the process on his own as while we were at Transport I decided to finally once and for all get the name on my driver's license changed and they called my ticket shortly after I'd paid for 17yo.  So he sorted out the rest of the paperwork on his own (first time doing it completely alone, he has filed paperwork before but with me in the immediate background).  I felt mild concern when 15yo (who had just come along for the ride and had been helpful in running up to the counter my ticket was called at to tell them I'd be there in a sec as I was just quickly handing over stuff to 17yo) and I couldn't locate 17yo when I was done with my name change, and then we saw him in the testing section.

He walked out in not long, spoke to the lady who was on the door helping to guide the endless stream of people coming in, then we had to wait longer as he'd passed (he said he wasn't sure why the other people were taking so long as the test was pretty easy) and we had to get the actual license.

After some initial whining when I took him for his first couple of drives about how much he hated it and how weird it was being on that side of the car, he's been doing pretty alright, though driving lessons have slowed down a fair bit as things got insanely busy again.

15yo had asked to check out the Kenwick Pioneer Cemetery for a while as she's taken an interest in history and old cemeteries in particular so we drove over there and visited each grave (very carefully as there was a warning near the entrance that some of the graves were unmarked) and the memorial.

I didn't take any photos because I have a weird superstition about recordings (photo, video or audio) in cemeteries and at funerals (I don't do it but I'm not sure why, it's not even being worried about the possibility of capturing spiritual activity as that would be kind of interesting and I know how to deal with it).

To cap off the month we had regionals, and cuteness was 17yo helping his little sister get ready for hers given that he loathes all things glitter. 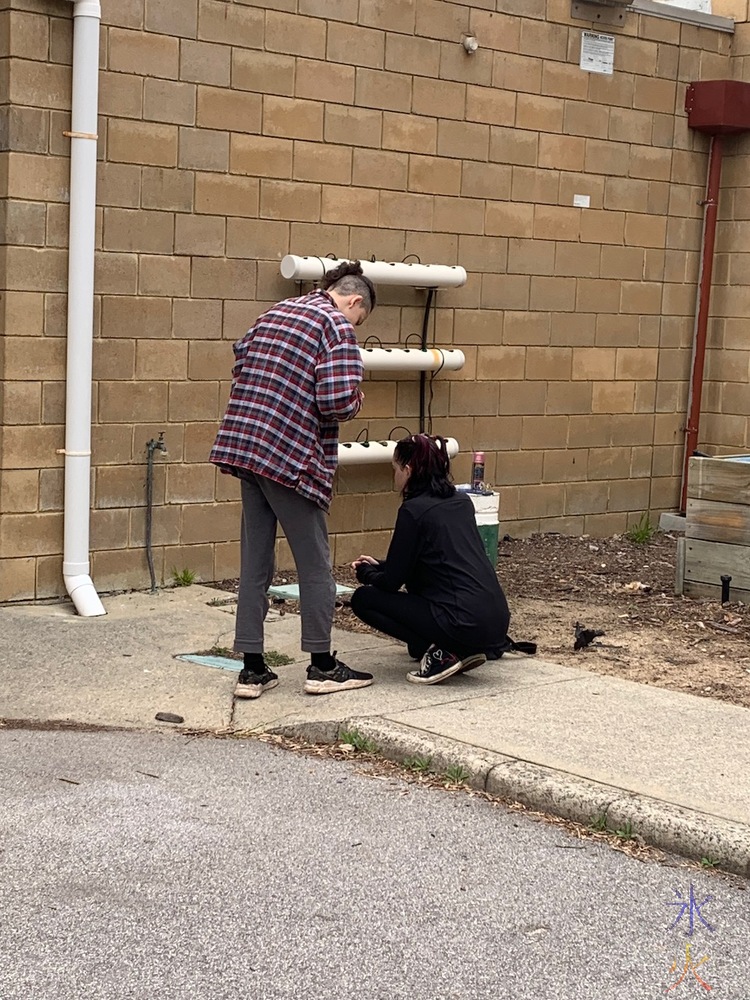 She did his and his friend's hair for their comp as well (the boys like to match the girls with braids and glitter and 17yo and his friend have hair just long enough to braid).

Both did really well and qualified for states.

I will hopefully get a video up at some stage, editing videos has been continually pushed down the neverending list of things to do.