It wasn't hard, just required symlinking some folder to some other folder, however I'm constantly in a state of feeling like the camel whose back is constantly getting broken by just one last straw it's not that big of a deal why are you kicking up such a fuss for

I hate video tutorials as I take an excessive amount of time to learn anything from them as most of my concentration is going into trying to understand what's being said and watch what's going on (audio processing shenanigans yay), but apparently everyone insists on exlcusively doing them these days, and either my search-fu was super screwy or not many have been made yet. Fortunately I found a decent one.

A bit of shenanigans happened initially as for some reason the initial node tree didn't seem to be getting generated in my thing as I was following along and didn't seem to cooperate when I manually placed them there.  I did some combination of deleting and purging blocks and starting over and then it somehow worked at some point.

And then cue the usual beginning stage shenanigans. 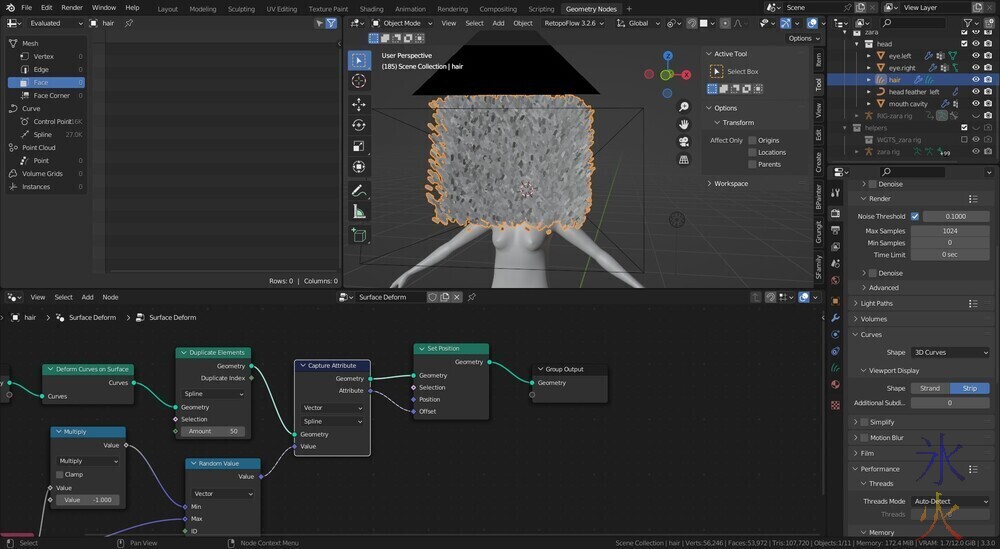 The full nodetree from the video looks like this and obviously should be adjusted as necessary.

Further research into once more trying to do feathers I can colour has led me on to this monstrosity which I'm intending on giving a red hot crack before I give up and just do feathers the way I know how to do them for the sake of being able to actually progress (once again I'm stuck fast and cannot move at all til I get over this) and figure it out later.

And in the meantime, I am overloading Obsidian as I'm transferring all my notes (hopefully for the last time, they went from a 200+ page LibreOffice document into a MediaWiki instance into a Drupal instance and I tried out a jamstack but it didn't work too well) and semi-randomly decided that the notes vault could also hold the scripts because some helpful soul made a fountain parser (which I made a css "overrides" thing for to make the dual dialogue side by side as there apparently wasn't styling for that and wreaked havoc with my backup jobs because apparently I'd forgotten to tell FreeFileSynch to use/follow symlinks). 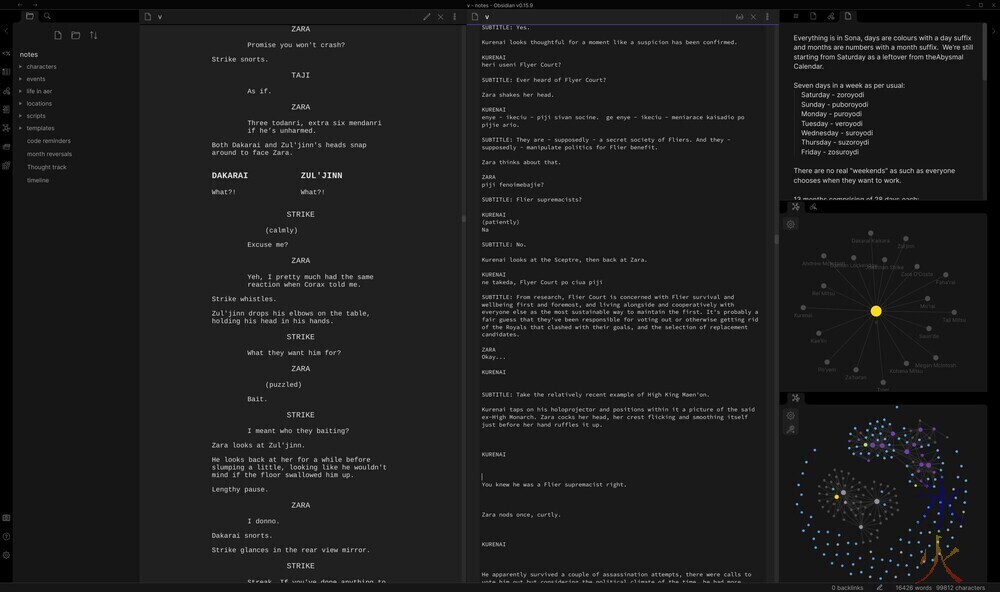 The two long panes are temporary as I have to reformat the pasted content from LibreOffice (there's a lot of padding, guess the tabs were interpreted weirdly) and also do the fountain markup. And I didn't realise I hadn't finished all the Sona translations.

Another fun thing, the Sona dictionary I had been using seems to have lost most of its words. I don't know if it got hacked or if the person that owns the site made some monumental error, but I'm now completely on my own as far as vocabulary is concerned.

I have absolutely no idea whatsoever if any of the grammar or how I'm putting words together is in the same universe as accurate, but that's okay. If I get this thing out and Sona people pop out of the woodwork to tell me just how badly I stuffed up absolutely everything I can fix it later. For the moment I don't think it's too bad and I think I'm getting the hang of it and I might have to check the first three episodes (the one in the screenie is iv) to see if things still make as much sense to me as I think they do now.

I'm not sure what my "normal" view of the notes vault is going to be like at this stage, the two long panes as seen here will probably be for script writing (unless the fountain plugin becomes able to use live preview) and I have a setup similar to my roleplaying notes for when I'm putting scenes into the timeline, but presumably at some point it's just going to be used for reference maybe?! x_x

Least this project is more organised than it's ever been even if the progress is still excruciatingly glacial.