I thought I would just do a quick little thing maybe describing my process but as the sculpt part is really easy (grab base model, add multires and subd modifiers, go to sculpt mode, use grab and elastic deform brushes to get as much of the general shape and details right as possible, use other brushes for finer detail) it didn't seem worth the effort.

Now one thing I am definitely doing differently is actually paying attention to was shader boundaries, and it did let me know that because I'm using procedurals and assigning shaders to faces, I really need to texture before sculpting. 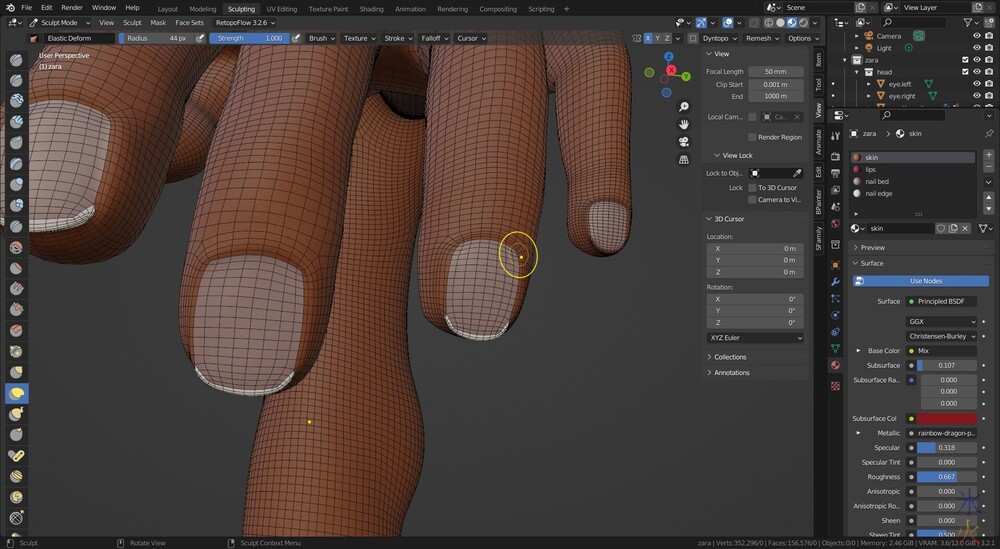 In previous iterations I'd done the sculpting first and then the texturing and the nail shaders were almost always way off and the wrong shape, because the shaders apply to the actual toplogy (most of what you can see in the screenie is multires 2, most of it isn't "real") and I'd be doing the clumsiest and ugliest workarounds and disguises to try to hide it because the other option was what happened anyway which was pretty much scrapping and starting again.

I didn't get particularly far with colouring 15yo's character either.  I was angsting a bit about the colouring style I was using and decided to scrap that and start again too. 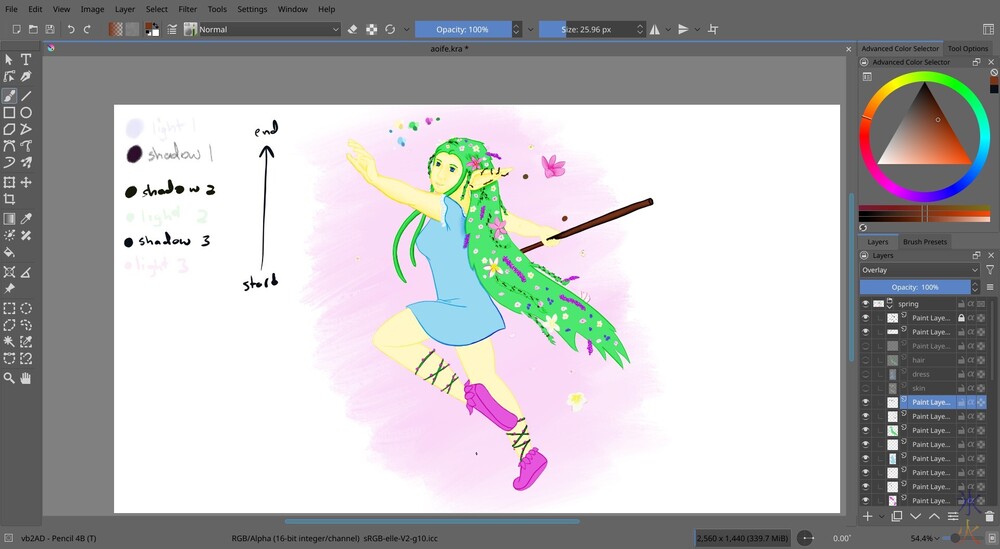 I think it's a hybrid of the complex sketchy colouring that I don't like doing because it feels like diminishing returns (result is okay, time taken feels too long for result and doesn't feel like it's something that will get faster with practice) and the rendering that I like to do as I think it's the only way I'll achieve something close to the effect 15yo was requesting on the skin (something about reflecting the opposite colour) without attempting rendering.

And I also have to be careful about the lineart.

With some luck the result will be passable as this method feels like one that could get faster with practice.

Doesn't really help that I don't practice because I'm hyperfocusing on the 3d. And roleplaying.

Meanwhile the reason I didn't look at my schedule because I was cramming roleplaying notes trying to get it done for the weekend this time but failed again because I was concentrating on the wrong thing. I found out a way to make "generators" for "critters" (mooks/grunts/random animals that are basically just there to cause violence) but for it to be properly effective I need to actually do all the data entry (for efficiency I've only been data entering things player characters and important non-player characters use) so I was doing that.

And didn't realise that I hadn't actually done the character sheets for the npcs that are actually needed, I had just made placeholder notes for them because reasons? So I jumped to doing that, and meanwhile I still also need to finish writing notes out of the sourcebooks for the player characters (one to go) and would really like to read the other sourcebooks to see if there are more interesting npc ideas (three more main books to go out of what I've got and I am considering getting the last one which I don't have yet).

And then because I need more projects I'm converting Changeling The Dreaming and may actually need to convert Changing Breeds after all (it's 1e and everything else is 2e, I did a very basic conversion so that the improvement costs were the same, and then realised that the Feral Heart table was very different to everything else and allowed them to be more powerful at earlier Feral Heart rating than everything else, which I was initially fine with because they have no magic or spirit ability whatsoever, but then decided that the Werewolves being the only Changing Breeds that can do nonsense was too Mary Sue so I'm changing it for the universe I'm making as currently I've decided all the CoD games I run are going to be in the same universe).

I've also been vaguely contemplating trying paid GMing but I think I need to run some games for strangers first to find out if I am actually good but that's terrifying. But more off-putting is having to run a business. I hate running businesses.