15yo and I decided we desperately needed a shoe rack so after dropping 17yo at TAFE we headed over to the KMart down the road and got a bamboo one.

It didn't end up getting put together til later that day and 15yo did most of it on her own but was struggling with a bit of it, and 17yo happened to be on his way to or from the kitchen, noticed and leant assistance. 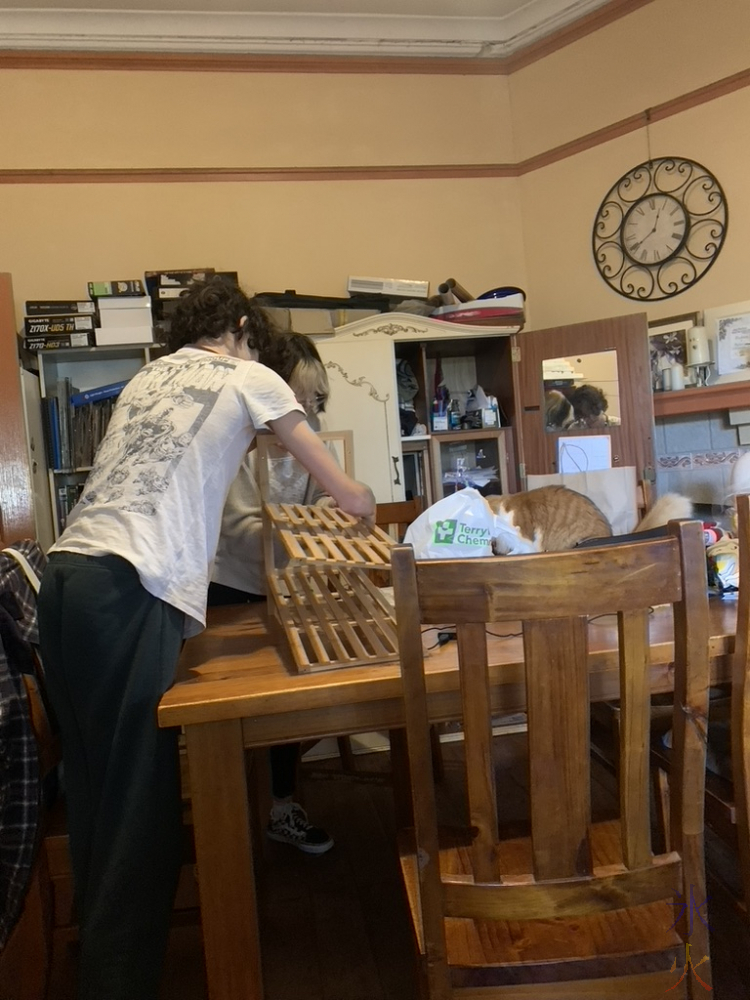 The cat was "helping" too.

It came together nicely and is now by the door doing an amazing job.

13yo got interested in programming as one of his current interests is game design. JJ handed him a C++ book from uni days, helped him get set up and away he went.

He managed "Hello World" and a basic adding machine.

Unfortunately despite J's attempts, he completely misunderstood why you needed to have separate projects for everything and everything that he's made went into one giant project that doesn't make much sense when compiled.

The interest is still there but I found out after asking him to send me a screenshot of his code that he has been unable to do any more as whenever he opens Visual Studio, it launches, pauses, then the window turns white and it claims that the application is not responding and asks what he wants to do, he tells it he wants to wait for it to respond and apparently it just never starts up now. We've decided to just blame Microsoft.

So sadly no screenshot as it's unknown when J will be able to have a closer look and see if he can fix it.

My kids are the type that will multiscreen things (they'll be playing a game and have a video going at the same time etc). They watch everything from anime to documentaries and when presented with whatever it is they consider interesting, they will come and tell me everything I never wanted to know about it (kidding, it's great and I don't mind listening to people getting excited about things). For 13yo this time it was tumbleweeds. How they're apparently considered an invasive species, how they reproduced, and then in typical us fashion we tried to work out how to weaponise them as they're apparently mostly thorns and could damage someone by rolling into them.

The only thing we need to do now is work on his arguing/debating technique as currently he makes the same mistake that almost everyone makes or made at some stage in their lives, of aggressively approaching things from the position that he's right and opposing ideas are wrong.

We had to clean out an algae infestation in his fish tank and while doing that we discussed how we might convert the tank into an aquaponics setup, how we would make a grow bed that would fit on top of it, how the lid might have to be modified to accommodate and if it was actually feasible (the tank has a lid with a light in it so modifications are well above our paygrade).

Given the stuff he wanted to put into the aquaponics setup I said we would be better off buying the fish a bigger tank without a lid and doing a custom job there.

With 15yo still being quite certain that she wanted to go to TAFE, I went into the front office after dropping off 17yo for his class and asked if she was old enough to enrol. She was, and the enrolment period was actually open then and not later in the month like I had been told, and there was a placement test happening the following day. That's twice I've gotten lucky with TAFE, wonder if there's a third time if 13yo decides to go that route.

Brought 15yo along for the test, she went in with a bunch of other people, and will now be commencing the same adult education course that 17yo is doing next semester. One of the teachers came to have a chat with me as I had warned them and it probably came up in the placement test very quickly that 15yo has a "learning disability" (I don't recall the psychologist that diagnnosed her specifying what it was if there was a specific thing that it was) with maths. As it's not severe, we have decided to see how she goes and if she needs extra support, they have a support centre thing that provides it.

I got asked if they would be okay if the kids ended up in the same class, I said they got on pretty well so there would be nothing wrong with them being in the same class but they would cope if they weren't. We'll see what happens next semester in that regard. It makes exactly no difference to me if they're in the same physical classroom or not as the classes all run at the same time.

I had thought we were going to wait til next year when we got back from Christmas Island to get a new dog, but being uncertain about the stupid vaccine mandates and apparently medical apartheid seems to be a thing, and also it seemed that everyone was very ready for another dog (I was the only one slightly hesitant but absolutely not by any stretch of the imagination opposed to the idea), so we adopted a puppy from SAFE via Petrescue (which is incidentally the same way we got my big dog Tali, except from RSPCA instead of SAFE).

We had been discussing names in the car on the way home, with the bigs looking things up. 15yo was quite adamant on the name Aeris, and it got the Final Fantasy spelling because my phone kept incorrectly autocorrecting Eris to Eros. Everyone is madly in love with her and the mood has lifted in the house despite the fun that is housetraining. 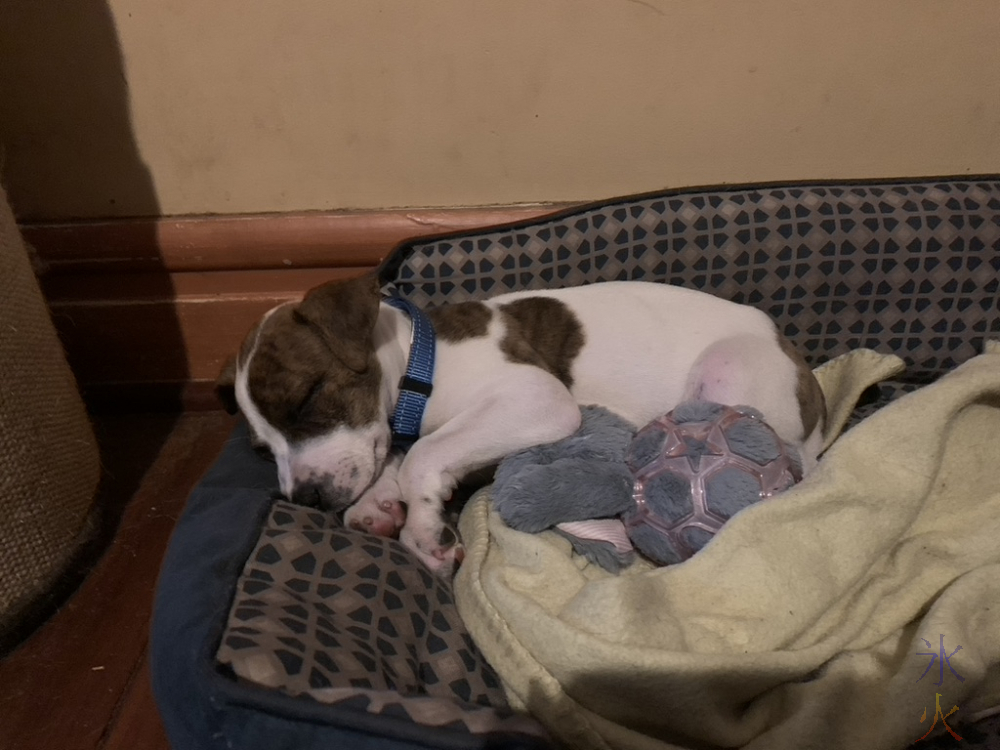 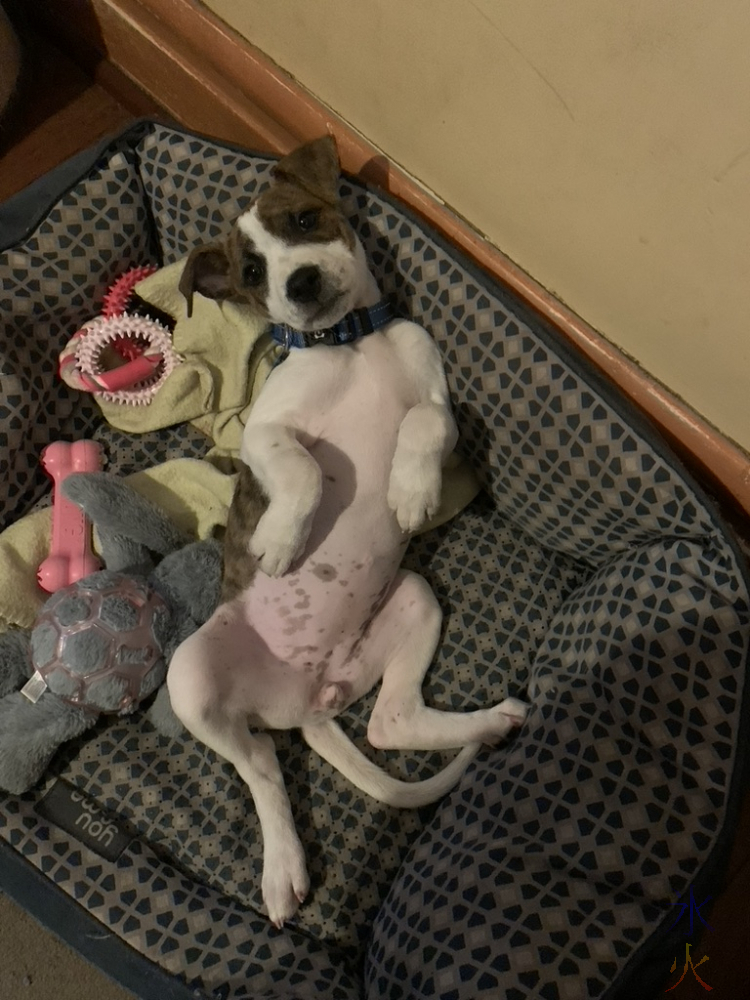 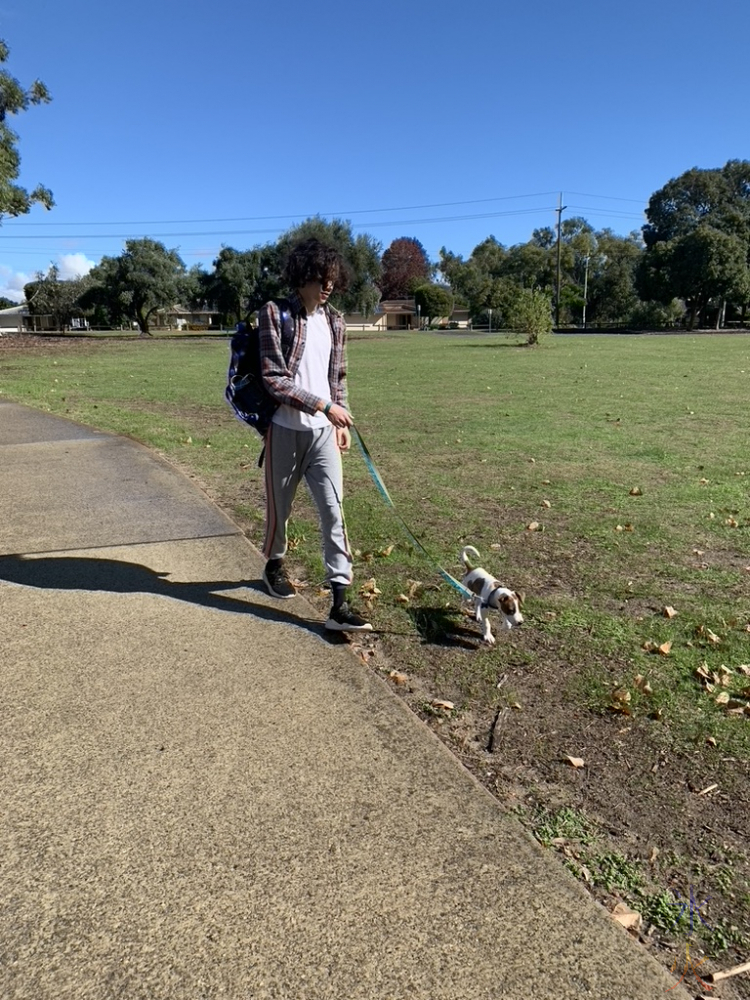 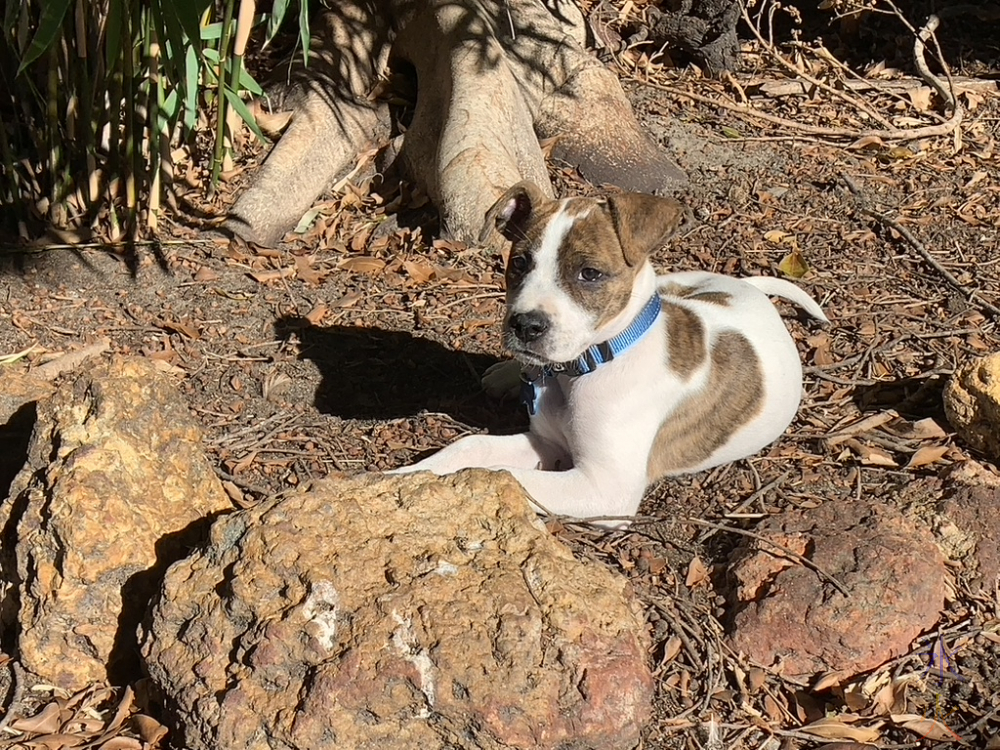 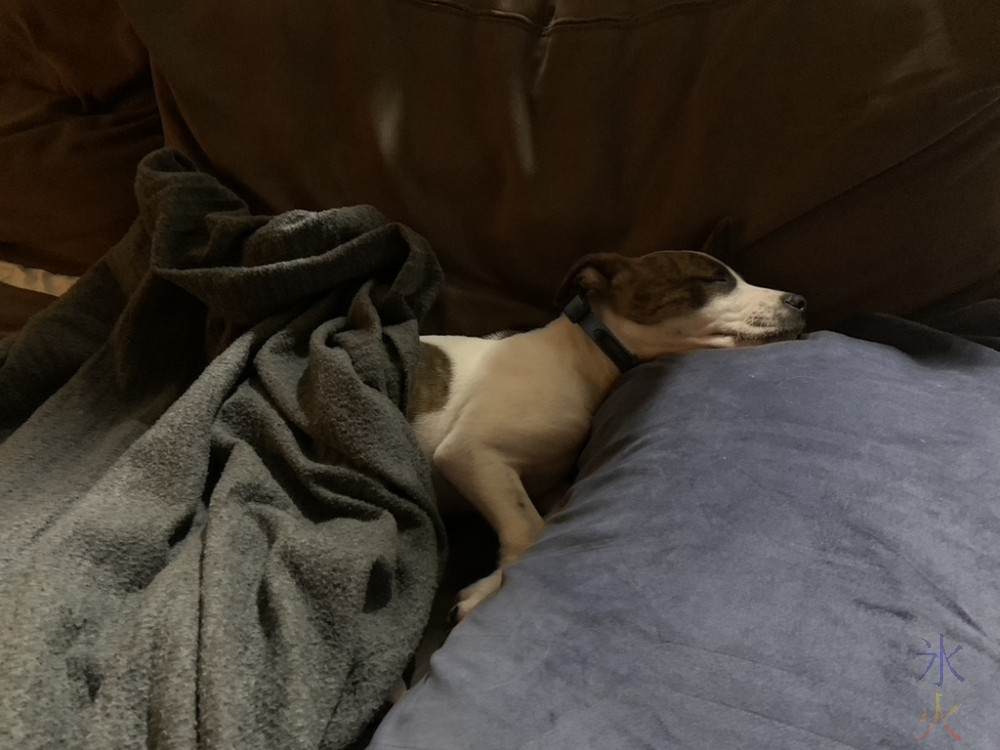 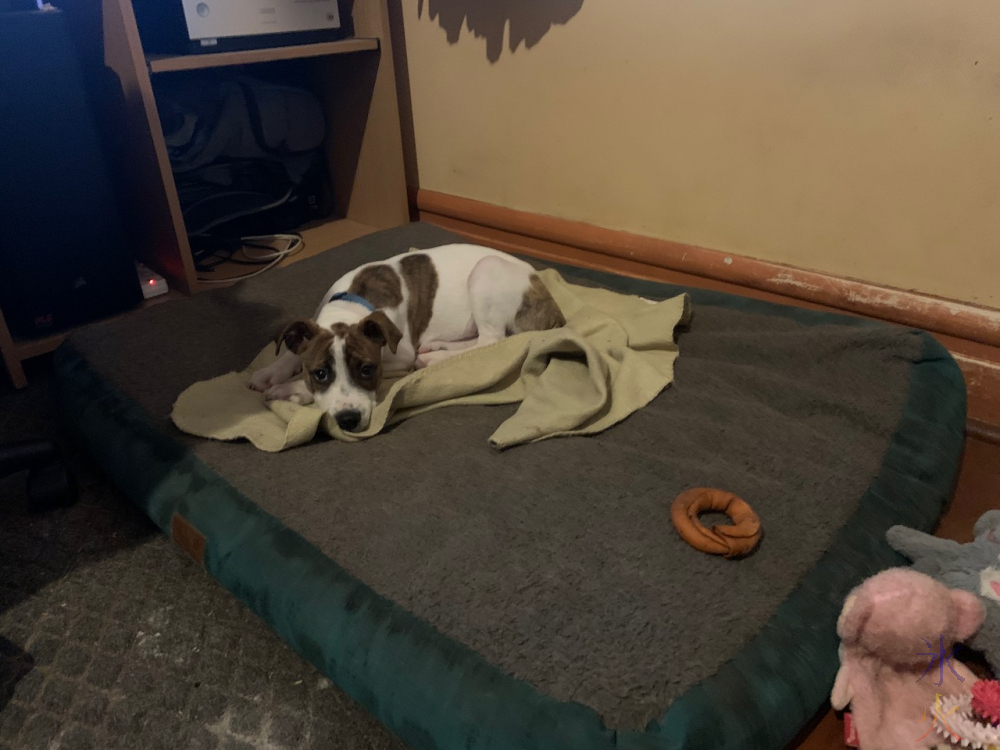 We had the election coming up so there was a lot of political talk in the house with the boys being curious and asking a lot more questions about the election process, politics in Australia, how the parties and the government in general was structured, what the House of Representatives and the Senate were in charge of and which one J was running for (the former).  15yo was much less interested but did participate in some of the discussions.

Then two days before the election J, who had been artfully dodging and weaving his way around covid despite talking and shaking hands with everyone, finally succumbed.  Fortunately he had already voted as he had been attending numerous pre-polling places in the couple of weeks leading up to the election.  He was somewhat annoyed as he had been wanting to be present at the polling places on election day.

I tested negative on election morning, almost literally ran to the quieter polling booth only to find that it was weirdly crowded for that time of morning (line went out the door, usually there's only 2-3 people in the line if there's any at all when I get there), had a much longer wait than I was used to, voted, wished I'd used a pen rather than a pencil (though I guess if anyone was pathetically desperate to cheat with those things they would just invalidate any that couldn't be edited), scrambled to the pharmacy next door to get some RATs, then sauntered home.

That afternoon I got hit with symptoms.

In the following days the kids started dropping one by one.

We had splitting headaches for two days, think there were fevers involved as well, definitely would not recommend, but they were at least easily managed with aspirin.  The rest of it was about as exciting as a bad cold.   The most "interesting" thing that happened was that I got another chest infection but that can happen with a "normal" cold or a "normal" flu, nothing special about this one.

The poor puppy did not get a lot of interaction in that week that everyone was mostly lethargic but we've been making up for it since.

Between the stupid mandates and the stupid virus and the weather most of my plans for May and the early weeks of June just didn't happen, and I'm currently scrambling.