Then there was a whole pile of stuff that piled up, most just normal life stuff and be struggling to be organised at the best of times, and a couple of pretty major ones like 15yo deciding that she definitely wanted to go to TAFE next semester and the associated running around with that, and getting a new puppy (full story with that will be in May Homeschool Miscellany in a couple of weeks, it's not that complicated a story, just an excuse for puppy pics).

So I ended up spending this weekend adjusting to having a baby in the house and redoing my work schedules so that I had the hours after roleplaying dedicated to writeups. UASG got an hour cut and it was wrangled into weekday evenings (I'm currently failing at adjusting to where I moved things). It's going to be interesting if the stupid mandates are kerb stomped into oblivion like they absolutely should be and I go back to work.

Gundry and the feather still haven't budged an iota, but I finished the rainbow dragon and phoenix tattoo for the second or third (and hopefully last!) time and am now redoing the sculpt using multires.

There is a line Zara says to Zul'jinn in one of the eps that goes:

you do realise that Wraith eyes are big and freaky, right? 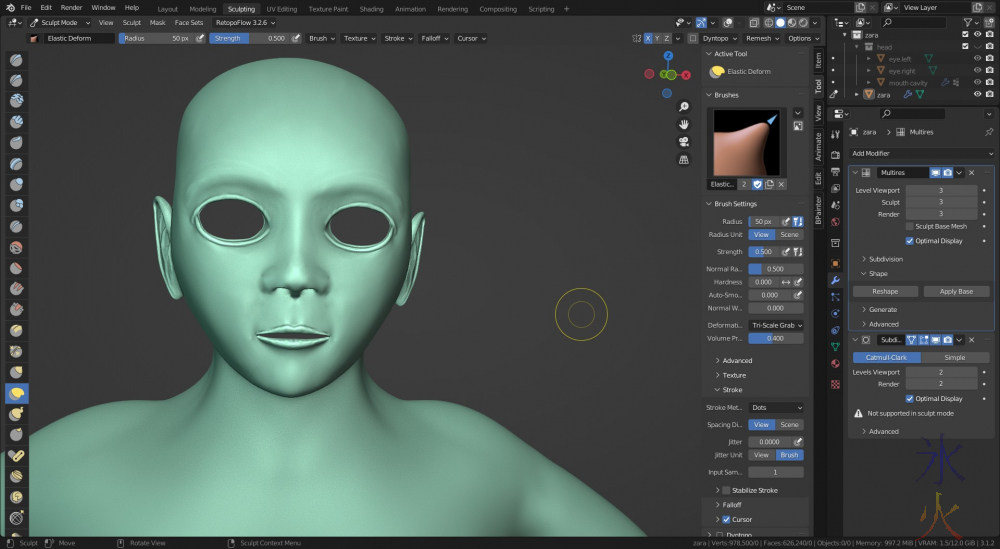 I'll need to resize the eyeballs at some stage to fit into those giant sockets.  And that's assuming I don't come back to it again.  I'm currently working my way down the limbs and torso trying to be careful not to overwork (she's got that annoying gymnast/dancer build where they look like sticks til they tense up, but I'm not sure how to sculpt or animate that).