It was another stay home month as I got too caught up in project related things and kept not sleeping, and also continually failed at finding places that we could go while unvaccinated. We did stuff though.

Like going into the TAFE and finding out that 15yo could try to get into the Cert I course that 17yo is doing next semester in preparation for going into the early childhood course sometime next year.

and now continues the eternal struggle to make sure she's up to speed with at least maths which she has always struggled with, English will be fine from what I've seen of 17yo's work

As a slightly more fun English and Maths project (with a healthy sprinkling of Theatre and Drama), I asked 13yo to design a DnD game we could play. He happily agreed but is still trying to come up with something.

this might be a while in coming as he has since gotten two new games and it's enough effort trying to get him to do normal work, on the bright side they are both roleplaying kind of games so there is a lot of number crunching involved

15yo got an insanely long wig for one of the characters she wants to cosplay. 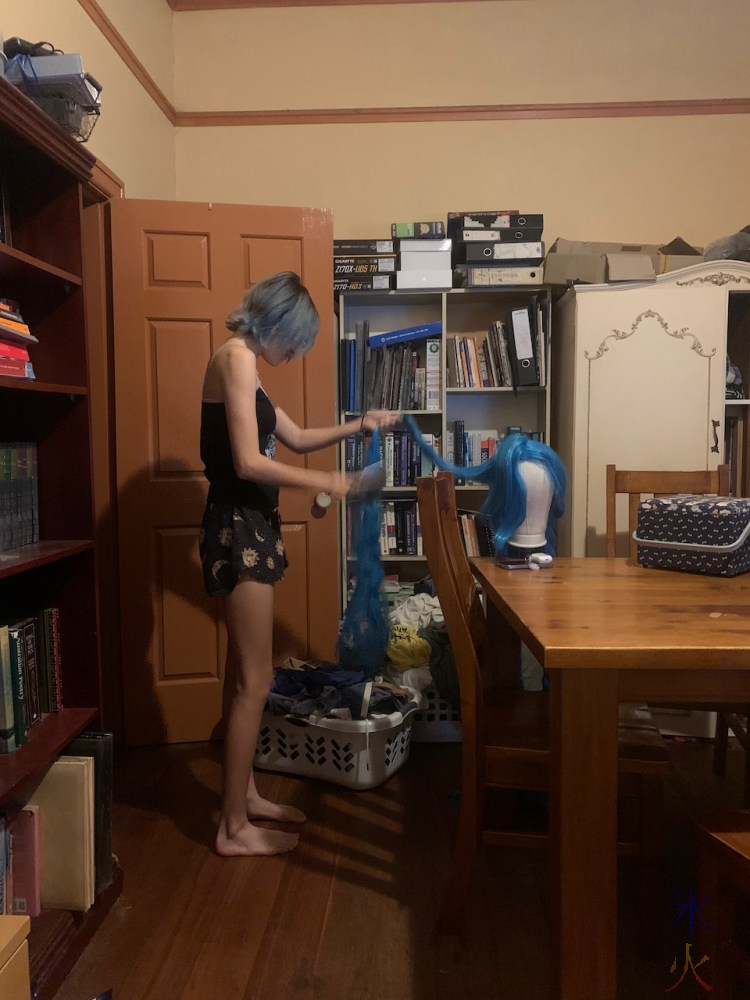 An inordinate amount of time was spent brushing it out and then putting small braids through so the hair would be frizzier/wavier.  I accidentally matted it while helping her brush it out and it took us a couple of days working in shifts to get most of it undone (she ended up cutting the last tiny little bit out).

Then we had a visitor for a couple of weeks, a gorgeous labrador that needed dogsitting. 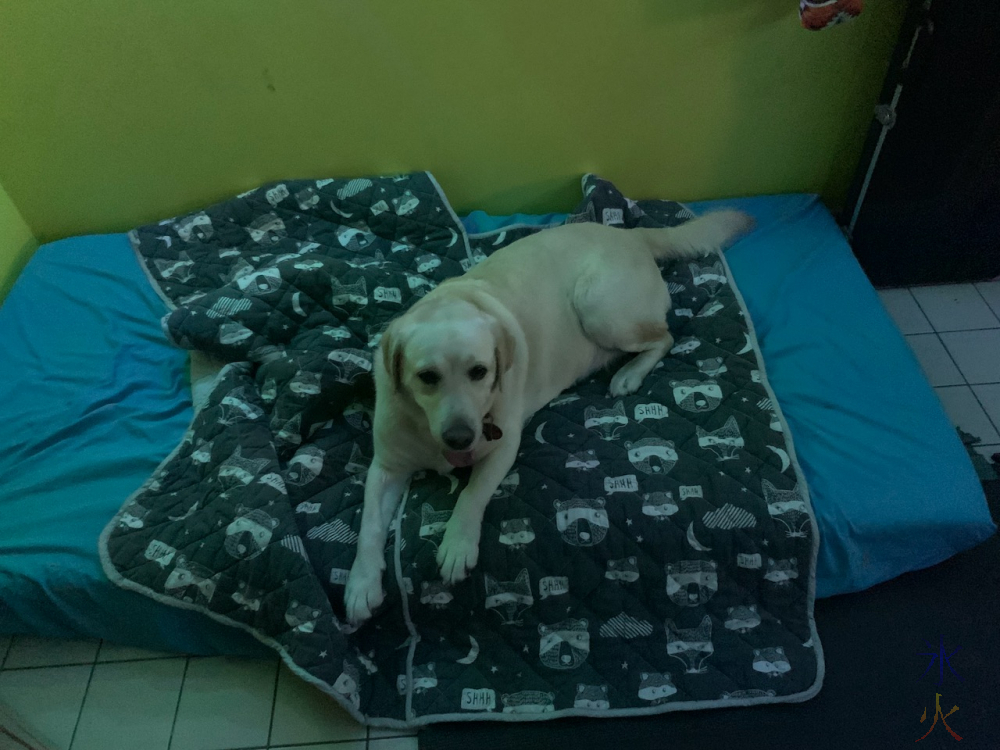 She came with just that blanket as bedding and after doubling it up and looking at her sitting on it, I decided that we needed a better option and was going to repurpose the black foam tiles on the floor but 13yo suggested just dropping his spare mattress as the sheet on it needed to be changed anyway.  We had barely dropped it when she jumped straight onto it and had to be booted off so we could pop her blanket on it.  She had the best dog bed in the house, but after the first two nights of being locked in 13yo's room to sleep, when she was allowed to sleep wherever she wanted, she decided to sleep in our room with the other two dogs.

She came on one walk to TAFE with 17yo and I (and got a bit anxious as we walked there with 17yo but she couldn't work out why he wasn't walking back with us and kept pausing and checking behind looking for him) but every other day J took her for a walk in the morning. 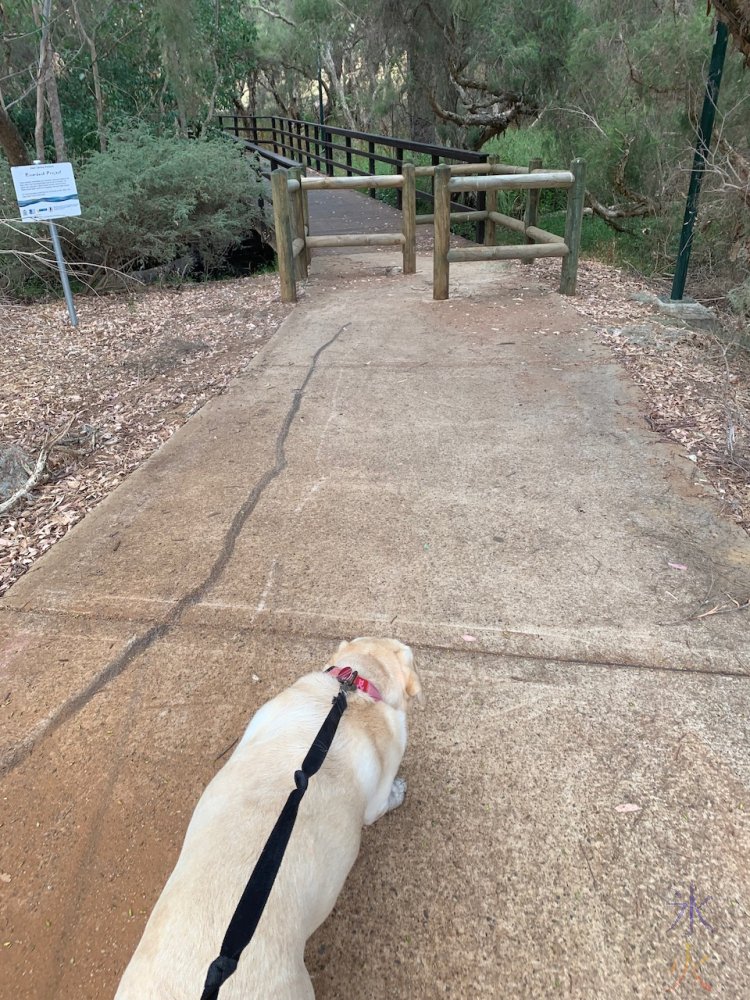 15yo got her cook on again, this time making doughnuts as she saw someone eating a giant doughnut on TikTok and suddenly had to have one (that was also a fun conversation/reminder about neurohacking which they're already familiar with as we started covering it from early childhood starting with advertising).  She found an easy doughnut recipe which comprised entirely of flour and yoghurt and could be cooked up in an air fryer.

As luck would have it, we only had Greek yoghurt (wrong type).  J and I were unable to get down to the shops and 15yo was loathe to walk to the shops to get the right type of yoghurt, but on hearing that there were doughnuts on offer, 13yo came to the rescue and literally ran to the shops to get it (I think he walked back fast). 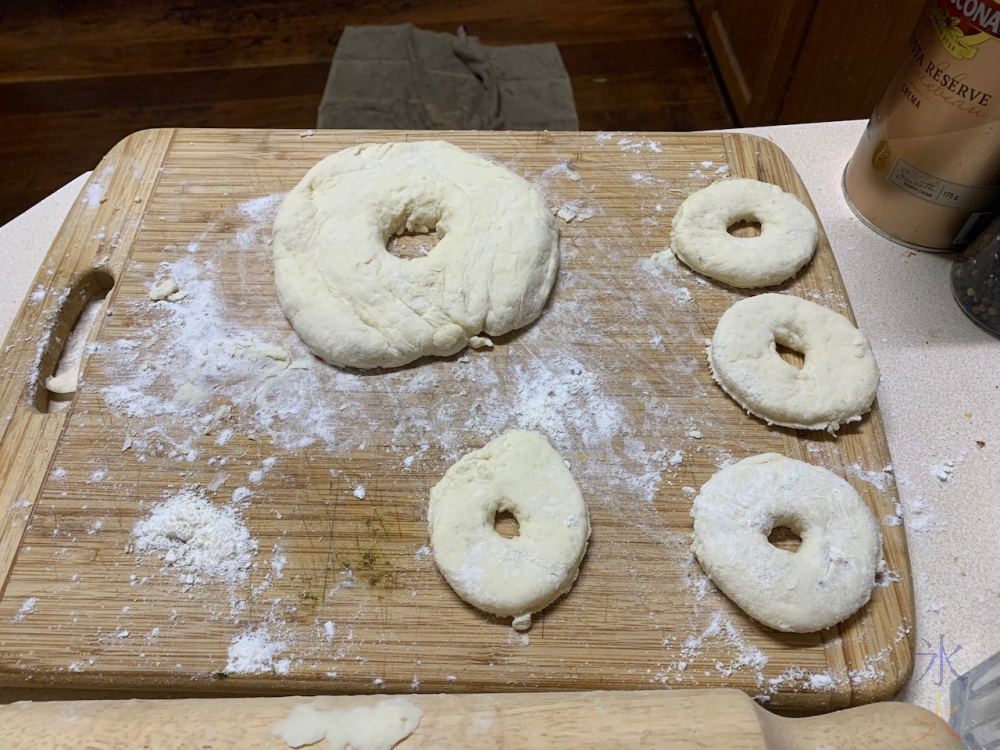 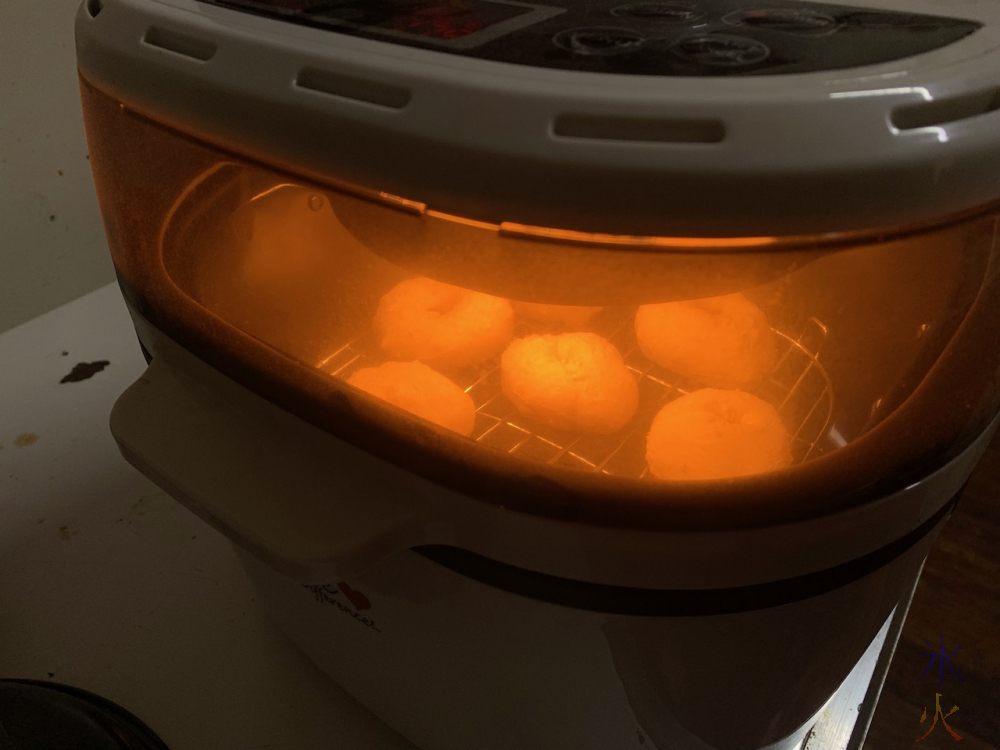 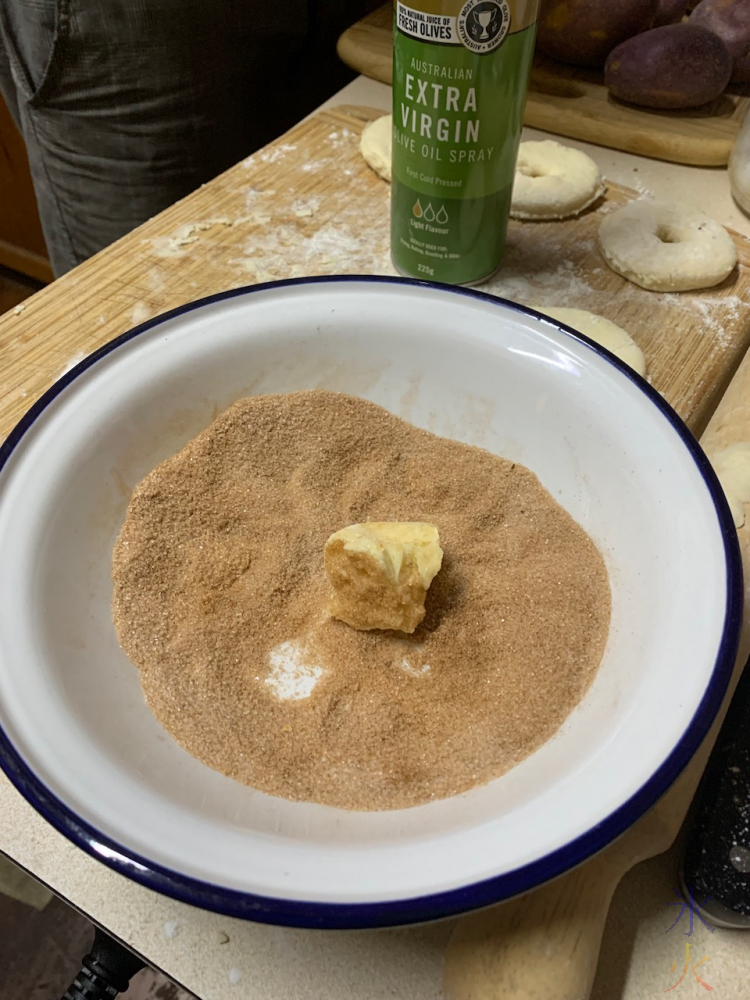 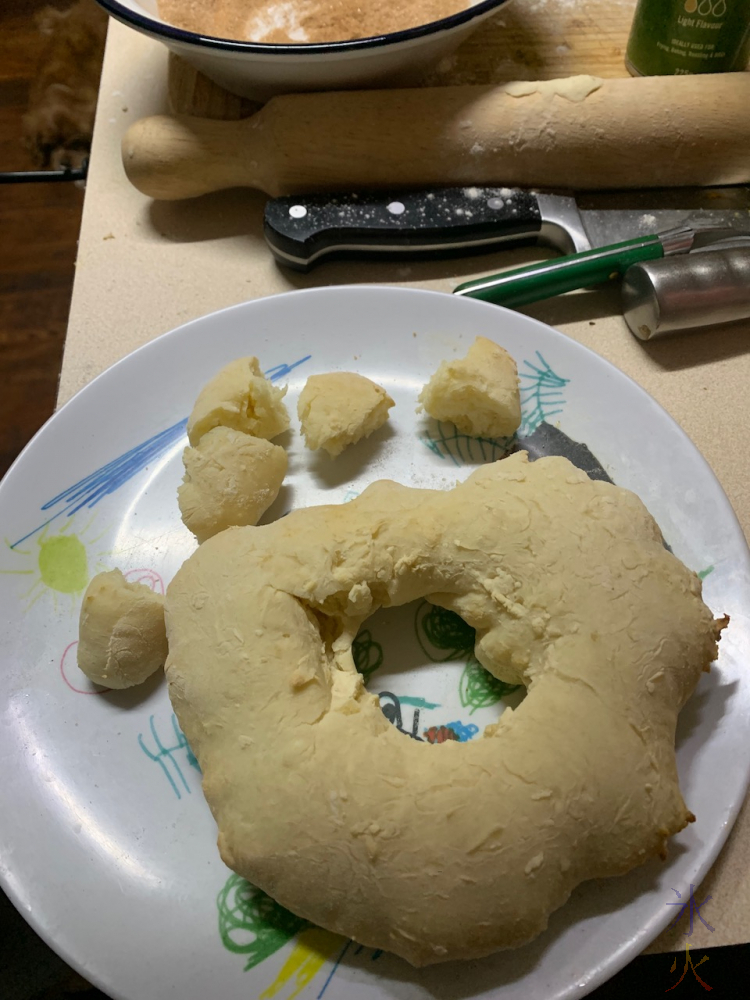 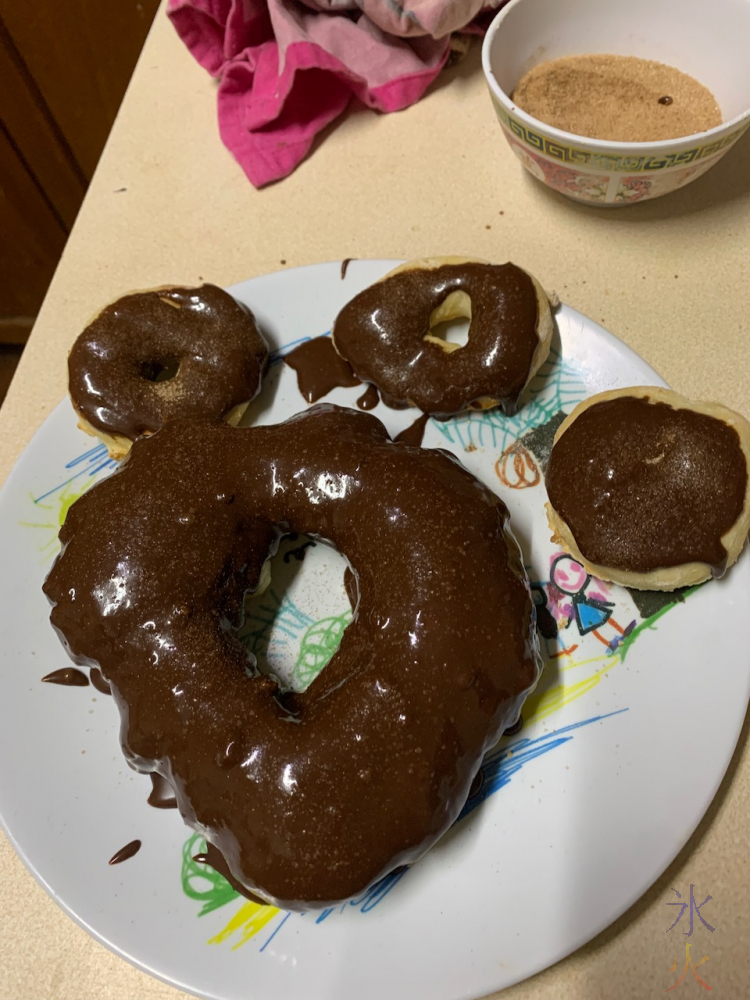 13yo started watching a Youtuber who talks about and does Japanese martial arts.  I found this out after he came up to me randomly and gave me a huge spiel about different types of Japanese swords and how they're made.  Days later he told me he wanted to learn Japanese.  I told him that normal Duolingo has Japanese, and seconds later he was on his way.  He even did some writing practice (and promptly forgot what he wrote the next day, though he did remember one of the characters), unfortunately he ran off with the piece of paper before I could get a photo.

Despite constant setbacks, 15yo has valiantly continued in her quest to find a job that she can do while unvaccinated, and eventually signed up for a babysitting website.  A few days later she got contacted and went on her first job helping a first time mum with a tiny newborn (she squees about how small and cute he is).  Looks like it will be a regular casual thing whenever the mum needs sleep or an extra hand.

17yo is still back and forth on his TAFE course, as he has to do a cert 2 to get into the pre-apprenticeship he wants to get into, and he's currently bored in the cert 1 as he isn't learning much (most of it is stuff he already knows so I guess the homeschooling worked out alright in the end).  He's had a couple of "blah" days but is sticking with it because that's what he needs to do to get to where he wants to go.  And "weirdly" despite bookwork being optional (so much so it pretty much never got done except under duress) and never having done any assessment pieces before, he doesn't seem to have any problems doing assignments and turning them in on time.