I had a cascade of stuff happen over the last two weeks.

Just stuff, nothing really major or bad but enough of that and not enough sleep that I can't remember what most of it was.

Also enough that when I was supposed to progblog last week I looked at how much progress I'd made from last week (virtually none) and went nup and bailed.

First, let's cover some prog (seeing as that's the original purpose of these and probably what most people are interested in).

I have two more toes to go on Gundry. 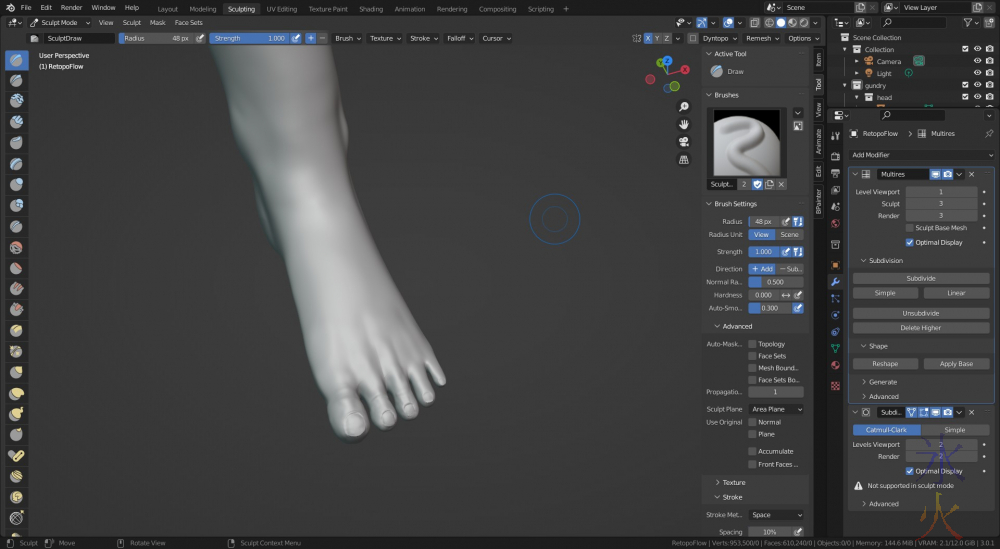 Zara's tattoo has been it's usual slow pain in the arse self.  I had pretty much erased all the single layer feathers and redone them to get the transluscency look back. 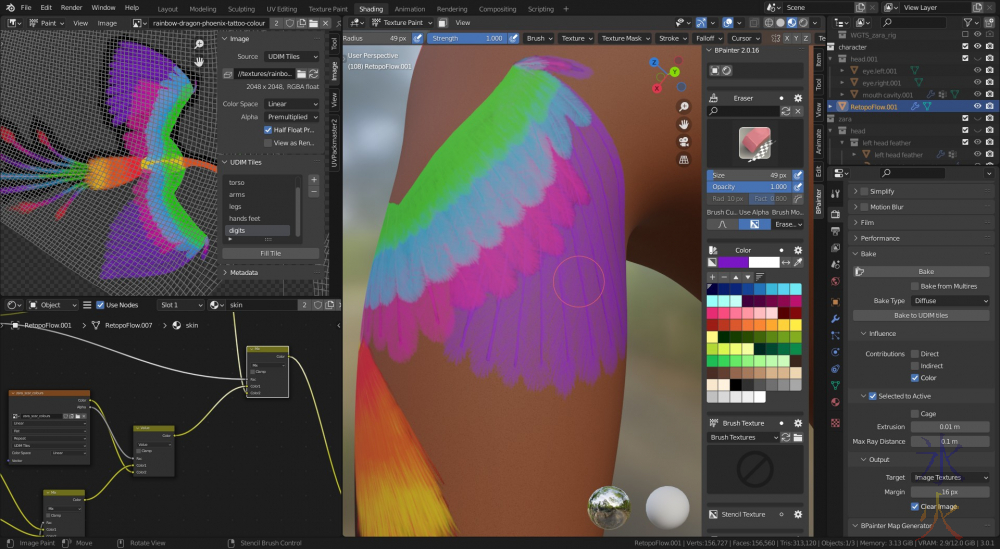 They look too solid with the accidental black background. 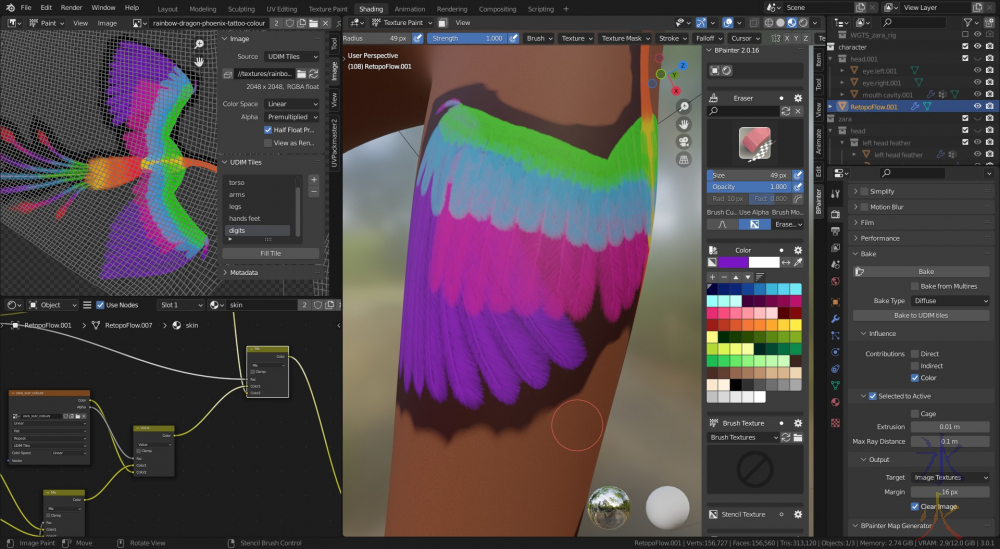 I had to use the erase/touchup method with the tail feathers though as with the shape they are I really didn't feel like trying to repaint them in the right shape again. 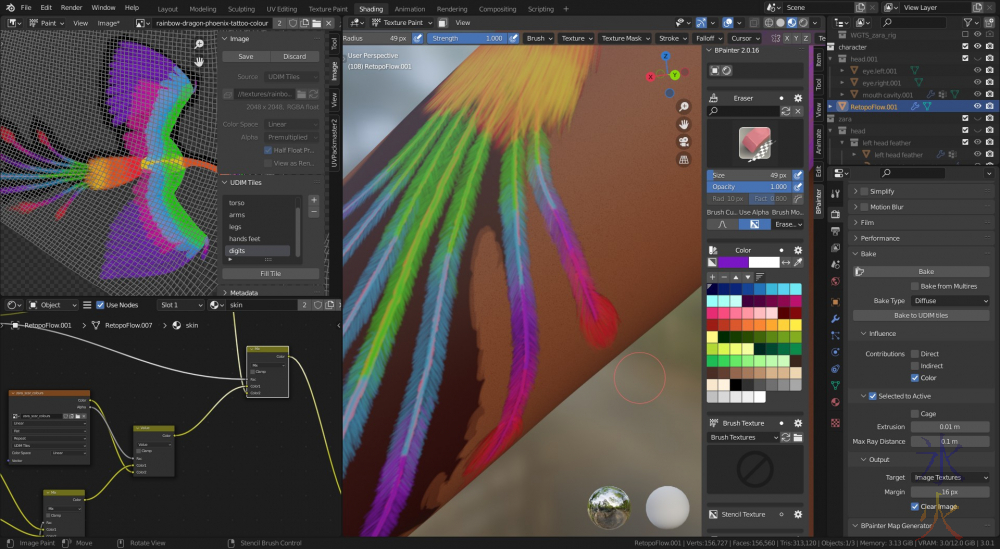 Both methods seem to take about the same amount of time though I will see if I can get away with doing this with the other wing as being able to follow the shape that's there rather than trying to recreate/get close enough to is slightly easier on my meagre brain.

I may be whining a lot but I am a lot happier about the glitches not being there (I don't know if they would have ever been noticable in any of the shots but I haven't figured out all of the shots yet and like I said above I would rather have something and not need it than need something and not have it, in this case it ends up being the same amount of work, just a matter of when and how much it pushes other stuff back).

and yet more tooling

All the interesting stuff is done unless you're interested in what I've been tooling.

All of the tooling has been in one app.

And it came about from roleplaying.

We were finally able to play Not Pirates remotely, and as I got tired towards the end of the session, I nearly forgot to give the players a critical piece of information.  And on rereading my notes (I still haven't written up the session x_x nor finished up the writeup for last mercenaries aaaaahhhhhhhhhhh), I realised that I had forgotten to give them some context and not critical but still important information because I'd kind of lost them in my text walls. 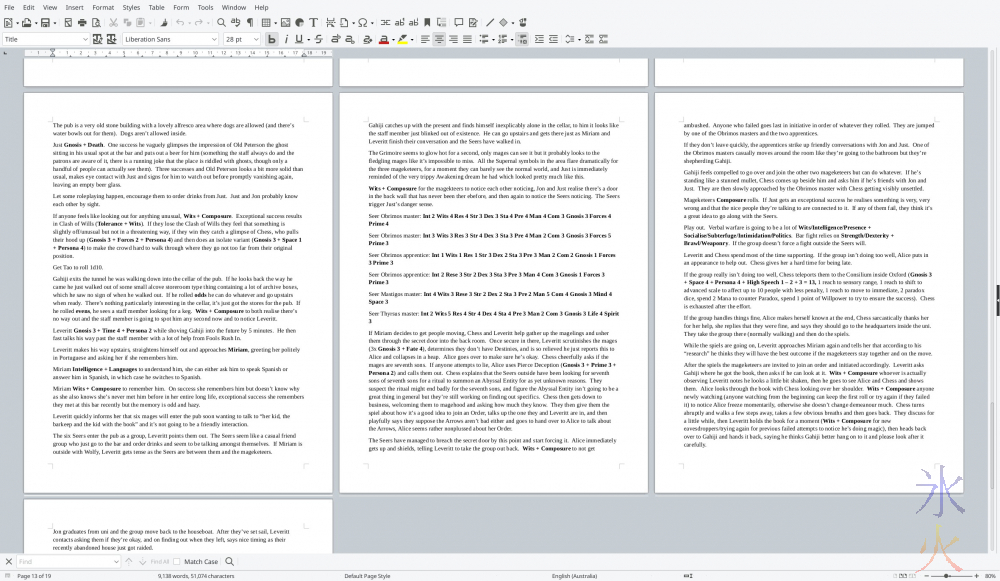 I already knew when I started using LibreOffice for notes when I started running games for the children that it was going to be inefficient, but it was the quickest and easiest thing to do at the time and I coped for a year.

After dropping the ball in Not Pirates and then later struggling with Vampires and Mercenaries notes (there are some bits that branch and I still need to find a way to show that nicely).  I decided I needed scene cards, and that it was too fiddly to do in LibreOffice, and after spending 5-8 hours (total not in a row) searching for variations on mind maps and note taking apps (and trying quite a few of them) I ended up with Obsidian. 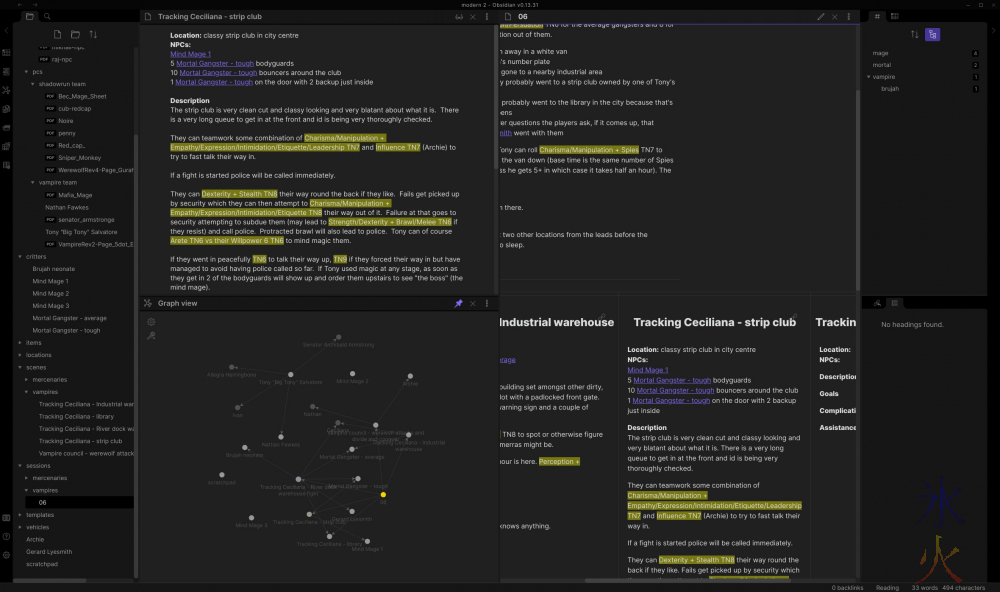 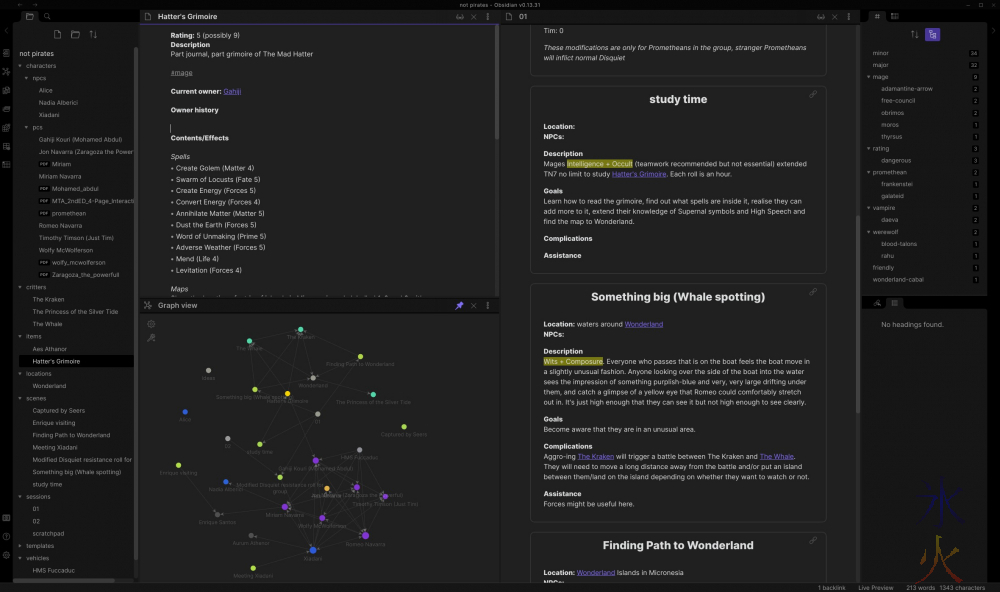 The table layout for branching is a little bit messy but workable.  Everything looks much neater when it's linear and even when the scenes are big I'm less likely to lose things because they're in boxes.  The graph view (colourful dots) both let me see what's connected to what at a glance and I can (and frequently do) use it for navigating between notes (typed nodes initially because that's essentially what they are, but it's a NOTE taking app so they keep calling them notes).

I made a bunch of templates in their own vault and since everything is just markdown files in a folder (Obsidian just sits on top of the folder and coordinates everything) I could symlink the templates in across games (there is also a css overrides file that is symlinked across everything that needs it).

It has done wonders for the world building in all the games as I'm having a lot more fun making things, and linking things and thus being able to jump notes in a heartbeat is a lot easier than what I was doing before.

Of course me being me I then got carried away thinking what else I could do with this thing and I rolled all my organisational attempts into one thing, and was partially successful. 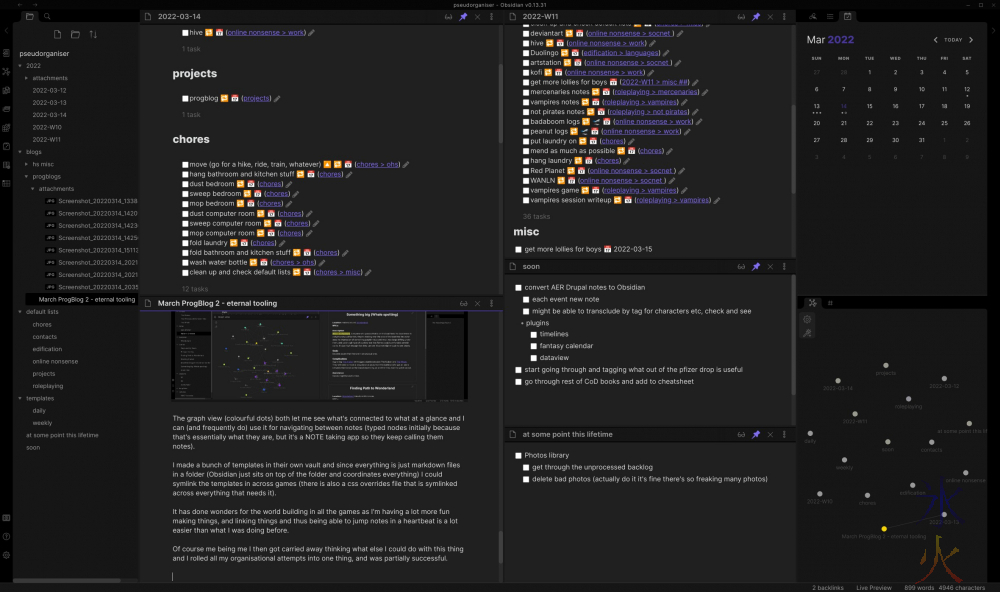 I now have a setup where I generate a daily and weekly note which is set to use a template. and they fill up with stuff that needs to be done that day and that week.  At the bottom of the daily files there's a "thoughts" section which is pretty much a journal (I write journals for myself and blogs for myself with the awareness that I need to make it easy for someone else to understand) and a section for amusing things I've heard throughout the day.

I forgot how much I appreciate journalling.  It's been a while since I've done it and previously it was always in a pretty book in my godawful cursive that's difficult for other people to read.

On the productivity front I'll know if it's working in a couple of weeks.  Meanwhile I do know that it's ridiculously easy to tweak (moreso than Habitica and Todoist, both of which I have somewhat still been trying to use, neither of them are particularly hard to tweak but I can only tweak them within what I have to work with there) and so I have been tweaking and hacking things here and there because the schedule was up for review anyway (I do those very regularly).

I've also decided that I'll be drafting blog posts in the productivity instance/vault/thing because I have a prayer of actually working on them then, usually the drafts that are on my actual blog that aren't a hs misc or progblog eventually vanish as they head off the front page (I can see unpublished things, no one else can for obvious reasons).  I don't think I will actually blog more but at least the chances of something that isn't progblog, random art or hs misc is now slightly higher than 0.

And I'm getting a bit carried away and trying to figure out if my cheatsheet notes should also go in (current answer is a solid maybe as while I could have each book in its own note, the small rig may not have the screen space to have everything I need open, but I guess I'll figure that out later as the books I've already taken notes from would just be a copy/paste job), and if I should transfer my project notes.

AER project notes are currently in a Drupal install which works much better than the Mediawiki install it was in before, but has a massive portability problem (would need to set up a webserver on my laptop to take it home).  The biggest problem I suspect I'm going to have is with the timelines, which was the killer in Mediawiki and what made me spin up the Drupal instance.  There are a couple of Obsidian plugins which I'm going to test out for that and if that works out I'll commit and copy the hundred million events over.  And if it does work I'll be happy as that will Just Work on my laptop (which also has Obsidian on it).

The hardest thing about drafting stuff on Obsidian rather than straight into my blog is the copy/paste, though on the bright side the copy/paste to hive will be slightly more straightforward because markdown and then I just have to fix the images.