March ProgBlog #1: in which I kind of remember I have a schedule for a reason

But then sometimes something demands a lot of attention and you need to hyperfocus on that sometimes to the detriment of everything else.

No, you don't get that? It's just me that has this problem?

I continued having a lot of distraction working on all the roleplaying notes, finally getting to a stage where I felt somewhat comfortable running the last session of the "extra" group prelude despite missing notes for Vampire and Werewolf, and then that ended up falling through anyway as one of the players had an unexpected thing come up.  Least I got to write the story notes up properly and continue with the cheatsheet, which I'm kind of vainly hoping I will finish for at least player characters by this weekend x_x

Less cram for that did mean I actually got some other work done for a change.

UASG is slightly stuck, but it could be because when I start getting to the end of something I start freaking out about all the things I could have missed.  Feet are happening though. 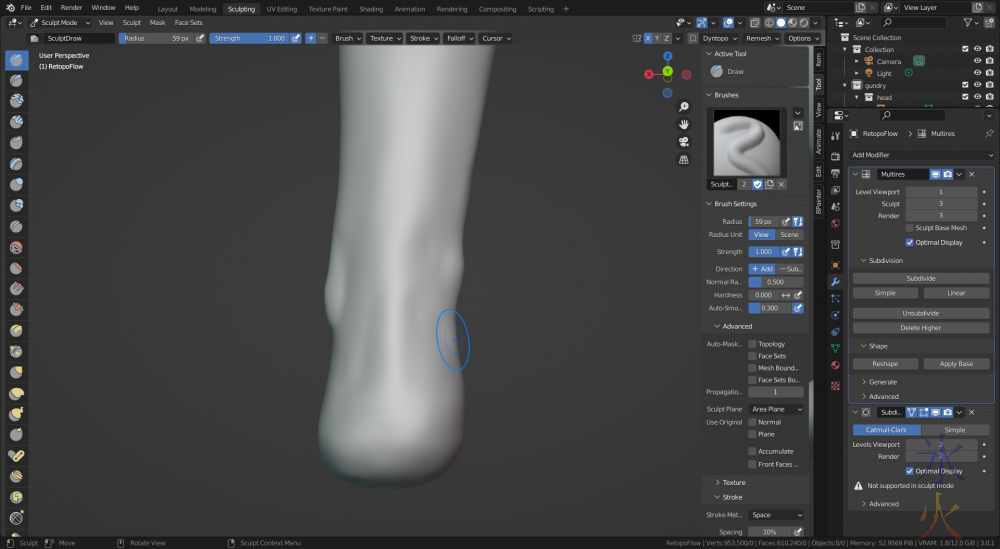 I need to find some paint to put on this chain I have on my desk so I can wrap it around my arm and see what kind of pattern it makes.

And then I have to work out whether I want to normal map it (which was vaguely what was requested by my young friend but will require forking the model as I would then be sculpting ) or bump map it (won't look quite as good if extreme close up is required but won't need forking the model as I can just remove it from the node mess).

Then I can figure out clothing and items.  My "budding" (currently extremely minimal) asset library is already starting to come in handy (doing clothes for Yue felt unusually fast because I have generic long pants).

AER moved a little bit, I figured out how to bake the tattoos onto the new model (and will be able to fix the low res problem bits, the new uv map is definitely better than the old one) which was basically the same process as baking normals (though I use UDIMs now so it's a different button)

I tried to isolate the two image maps I have (a colour map and...well technically it's another colour map but I use it with an overlay node to make it a shadow layer) so I can have the same setup as I currently have.  The render view amused me. 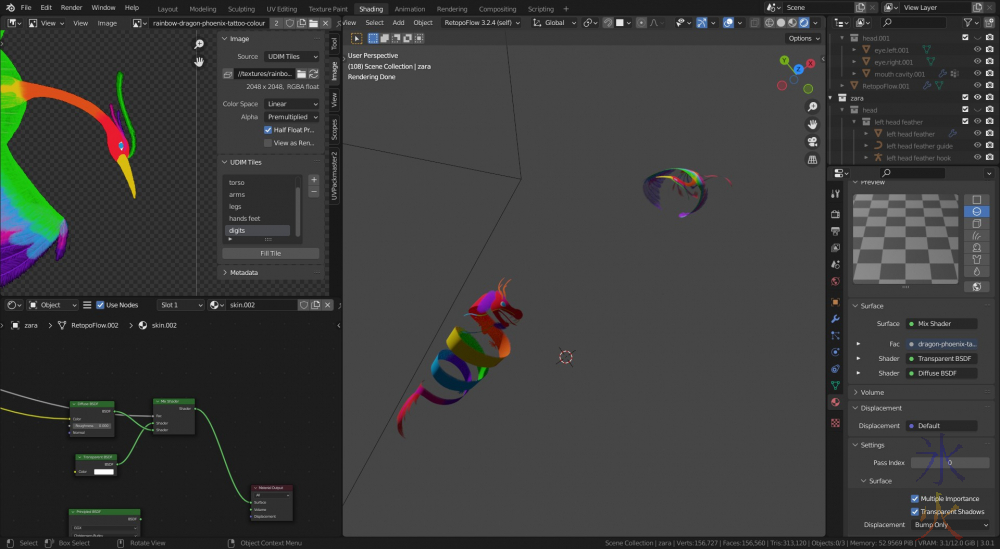 The transparency got baked as black (which is a thing that happens) and I was too dumb to figure out how to make black transparent in the nodetree (I know it can be done and I have actually done it before but the method I used before that I double checked in a test didn't want to work) so I just went the manual edit.  It may have been quicker to do it in Krita as far as purely removing the black background goes but while I'm here I'm also fixing up shapes a bit, especially around where things warped and look very pixellated in the low res areas of the original map. 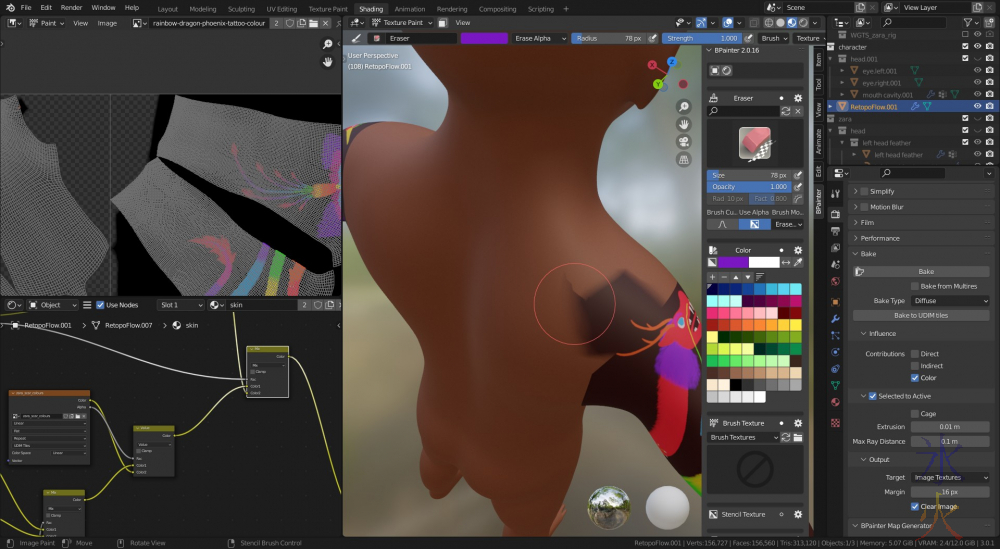 Had to use the normal end of the pen with the eraser brush as using the eraser end made it glitch out on occasion and made it keep marking where it shouldn't have been.

For the shadow layer I haven't worked out if I'm going to invert the colours so I can see what I'm doing and then use an invert node to get it back to the colour it's meant to be in the tree, or leave it the colour it's meant to be and do a white background (which in this case just means deliberately colouring the model pure white).  Tending towards the latter just so I don't need to shove in another node (I don't know if it makes a difference in the grand scheme), both methods are going to end up in the same place of manual editing.

And I still have the gloss map to do but at least they can get painted on the nice uv (to some value of nice).

Moral of the story: get the uv maps right first.

But at least I'll be able to reuse the tattoo now as all the models should have the same uv layout (and if I find that they don't for whatever reason, I can fix that).