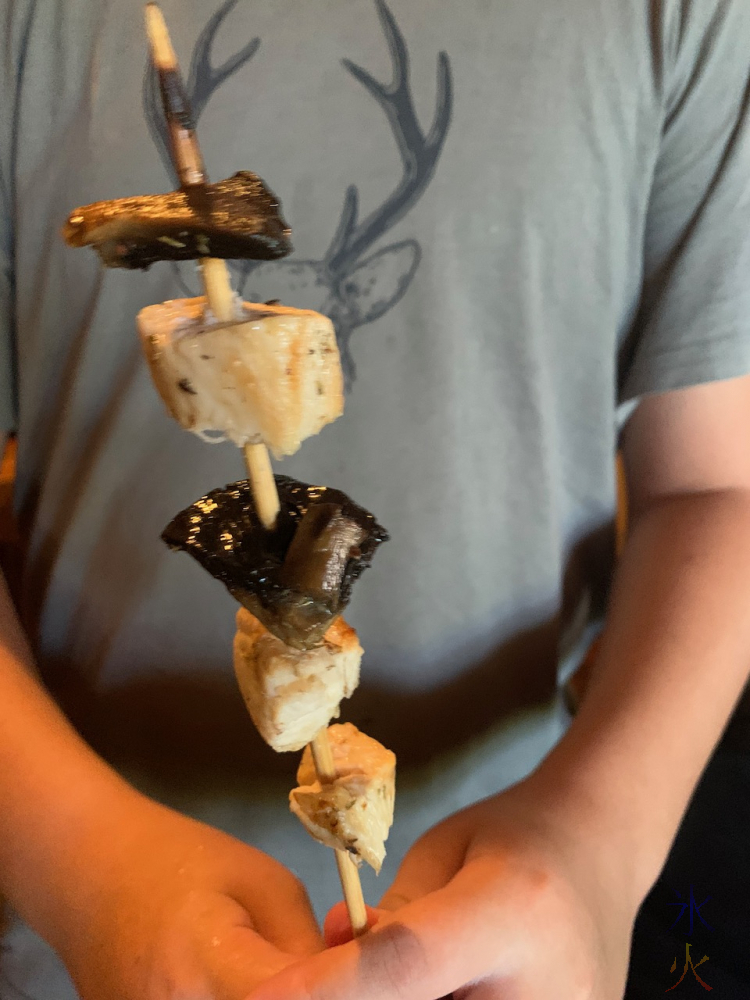 In the spirit of more expensive excursions less often, we decided to do the Fremantle Prison tunnel tour before school term resumed so that 17yo wouldn't have to skip out on gymnastics.  We went in to Freo early intending to have fish and chips but then everyone ended up splitting off as JJ felt like Turkish and the rest of us decided we wanted Chinese.  The food court looked very sad with not much activity even though it was a weekend night and only four stalls still operating (everything else had been packed up).

After dinner we strolled around Freo for a bit and after 6pm when the stupid mask mandate finally buggered off, doubled back past the food court to get ice cream before walking up to the prison for our tour. 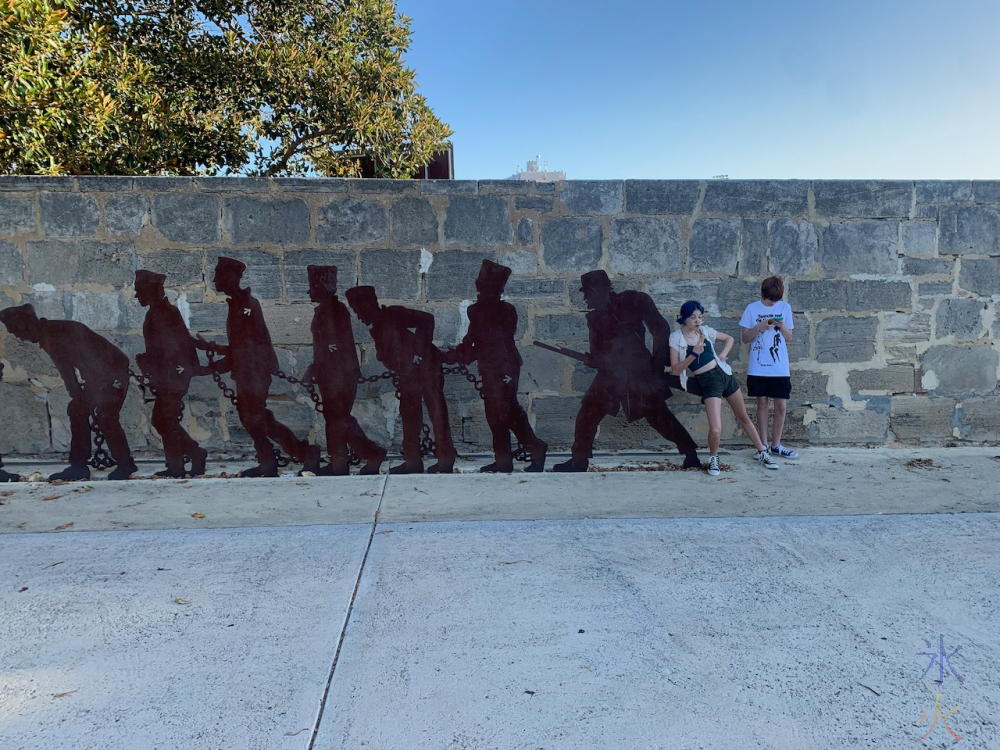 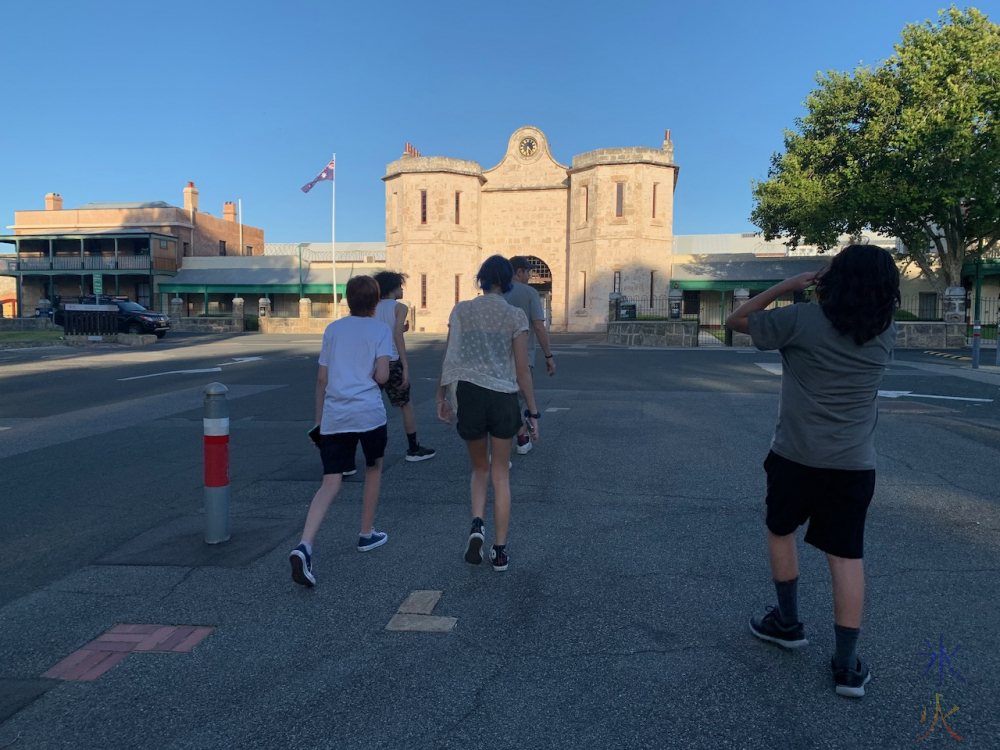 While waiting for the tour to start I walked into this little room which I either hadn't noticed before or wasn't ready to receive visitors before, it was a very tiny little sub-museum thing which explained a bit about the history of the prison and seems to have been part of the head warden's house (which was attached to the front of the prison, it's the building with green trim on the right of the above photo, I think the one on the other side was probably also someone's house).  Whoever had constructed the museum room (no photos purely because it was a smallish room and there were other people in it) had left the entry to the cellar available to look at but otherwise inaccessible. 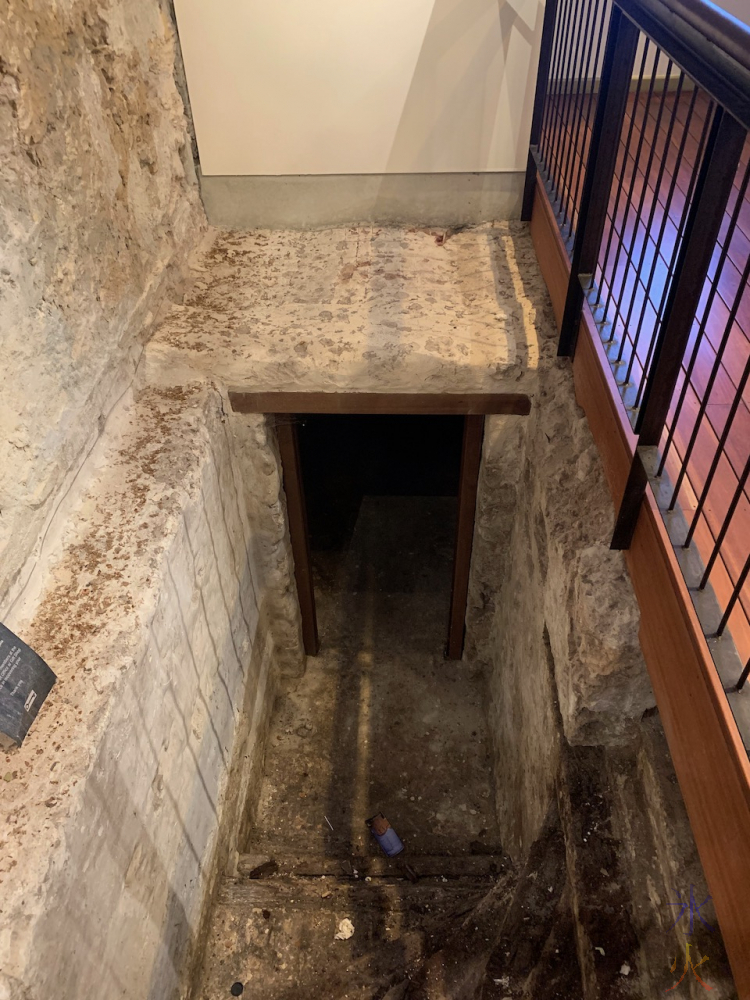 Perhaps due to still being school holidays or the fact it was conveniently after hours, we were with a much bigger group than we were generally used to but at least J could come with us.

As is normal with Perth summers especially when you're on the coast, it was still light when we started the Torchlight Tour (after being given some cool little keychain torches and a briefing). 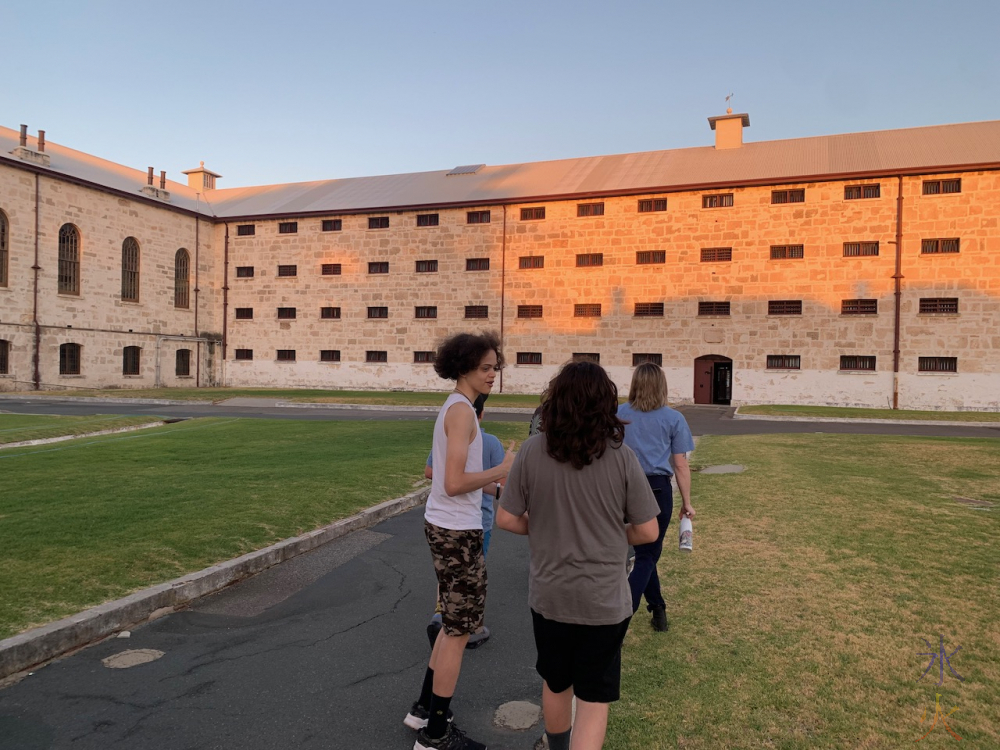 It was relatively dark inside the prison and the tour was peppered with actors playing ghosts or staff that would have been active when the prison was active.  One of the first ones we encountered was a guard yelling at us to stop before we headed straight into a riot which was a "rookie mistake".  Each one gave a history of one of the prisoners or an event that occured in the prison, or in the case of one of them, the idea behind the design of the solitary cells and that the one in the first position was the one people were put in before hanging. 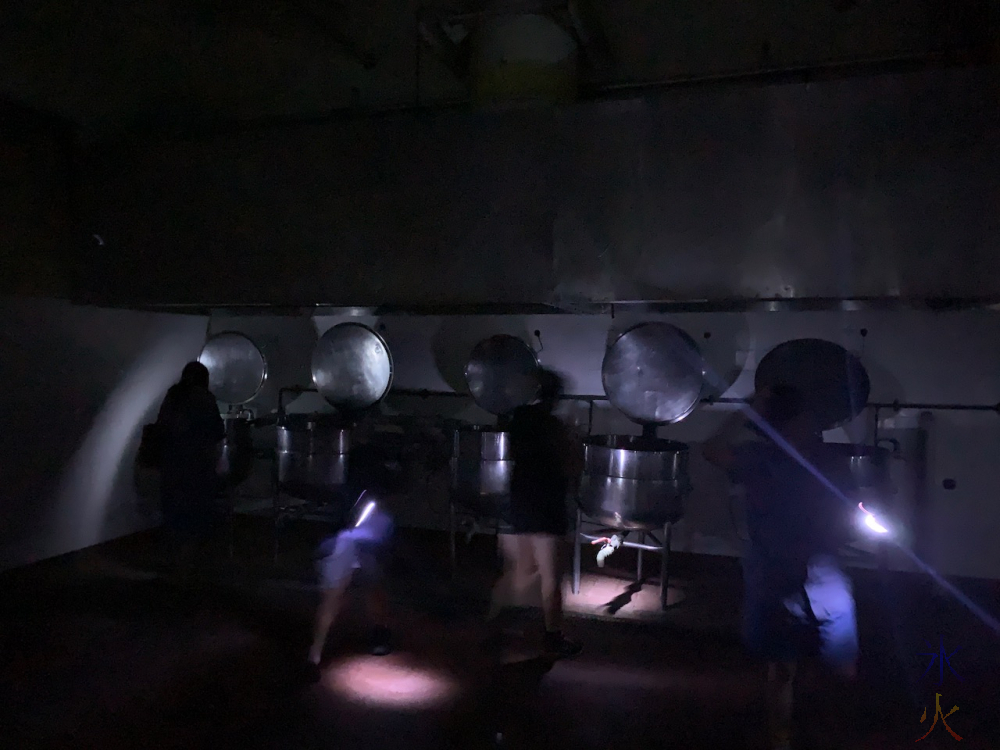 While exploring the kitchen and looking at the giant soup pots in the corner, we didn't get the story this time of how one of the inmates had stabbed another for not liking his soup, but did get a story of how when inmates didn't like the food, they would leave unpleasant surprises in the bowls when they were collected, and how in revenge whoever was cooking would add those surprises to the soup the next day.

While we were in the kitchen we had a couple of Scooby Doo moments. 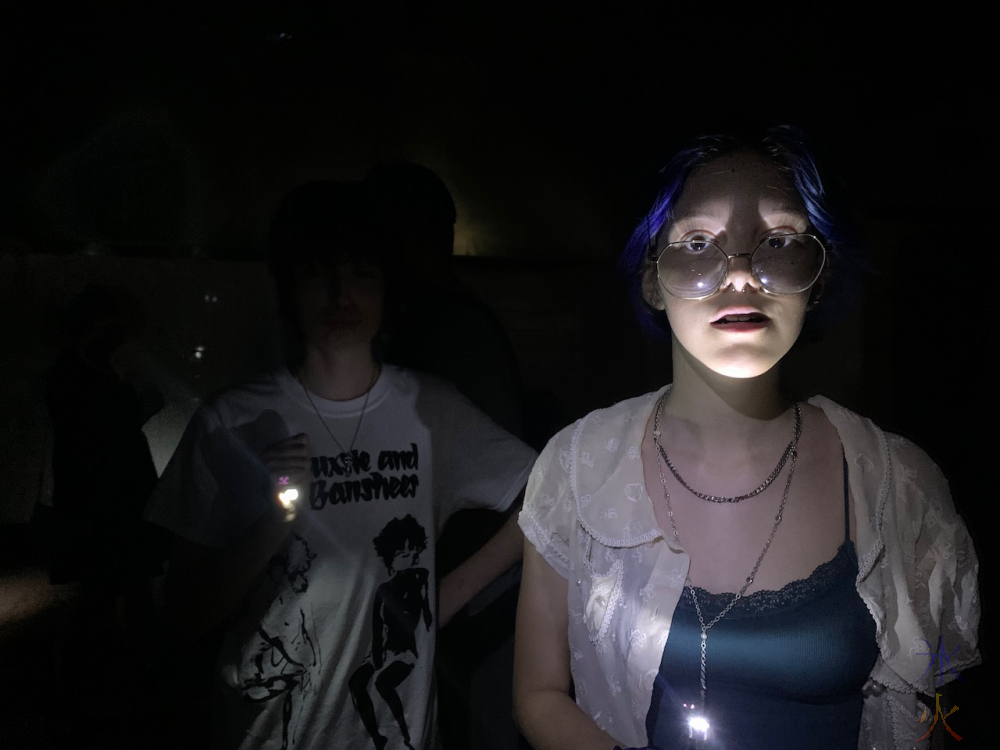 In one of the exercise yards the guide was amused by 15yo knowingly perching on the edge of a urinal. The gallows are always pretty intense.  At least one person on the tour ended up having to go wait outside after a peek in. Our kids were fine though and hung around to listen to the gruesome hanging stories and the amount of maths involved in hanging people (which seems to be mostly along the lines of making sure the length of rope is right relative to the height of the person so that they die pretty much instantly, which we found out as one of the gruesome hanging stories involved the rope accidentally or otherwise not being quite the right length for someone and they did not die instantly).

Some of the cells have artwork in them and these seem to be open every tour. 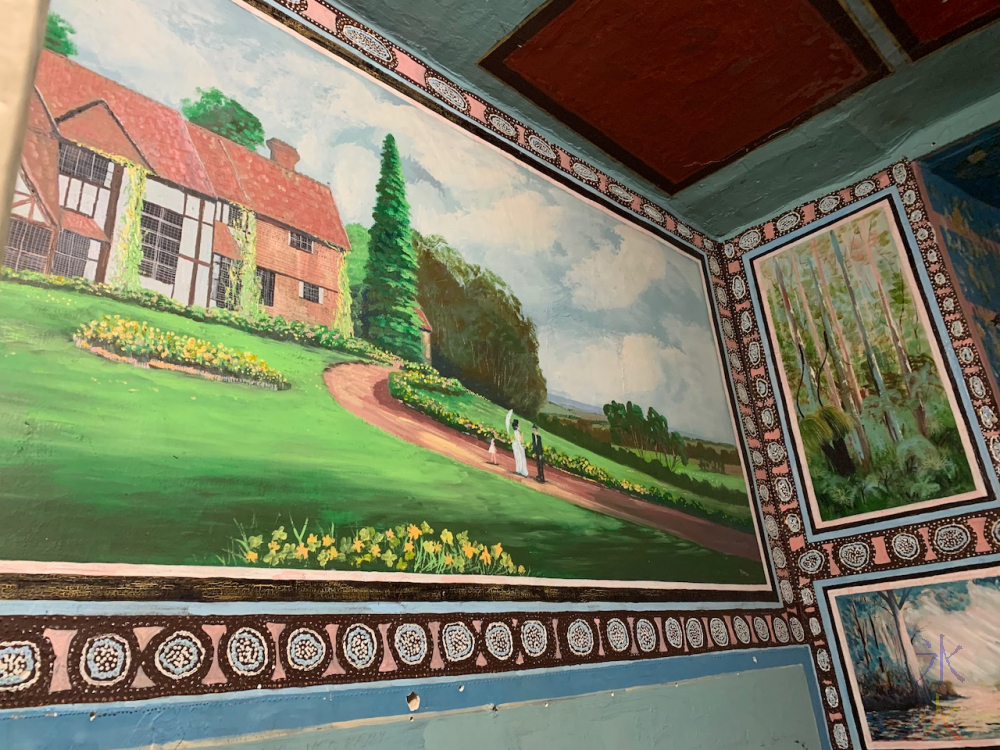 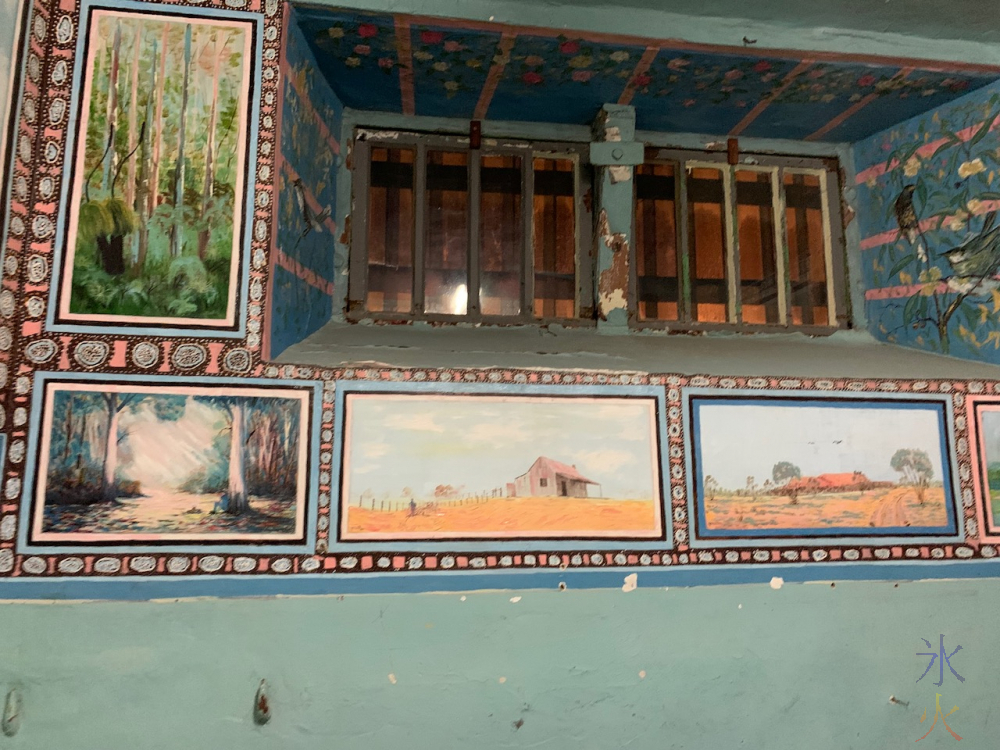 As we were leaving with the kids excitedly discussing bits and pieces about the tour and their impressions of things, we noticed that the building was lit up. I took the photo and we kept walking and when I glanced back it was lit up a different colour, so we stopped and looked at it properly for a little while before I realised (belatedly as the kids at least had already noticed) that it was cycling through colours.  It looked pretty cool.

The kids excitedly declared that they wanted to come back for the Tunnel Tour.

We got a 3d printer and 13yo has plans to use it to print minis and dungeon tiles. I told him if he could figure Blender out and create some dungeon tiles with it ande 3d print those, I would play DnD with him (this is a very big deal because I actually hate the DnD system).  He is finding Blender difficult (it has a learning curve similar to an overhang if you haven't played in 3d apps before) and was contemplating "cheating" by finding bits on websites that sell bits which I said he could do as far as just printing stuff out goes to be able to use, but I told him I wouldn't play unless he'd done some bits himself.

He was rather disappointed that his attempt didn't work.

At this stage the 3d printer isn't doing much as we may have to relocate it to somewhere more stable as we can't stabilise the filing cabinet it's on enough and also because we have floorboards it's adding to vibrations whenever anyone walks past (even if they try to walk carefully).

The boys randomly decided to go to the park with their "weapons" (which hasn't happened for a while, pretty much since they hit tweens and computer games became more entertaining than going out), I got dragged along for the ride and got some entertaining videos and a handful of photos of the ensuing epic battles. 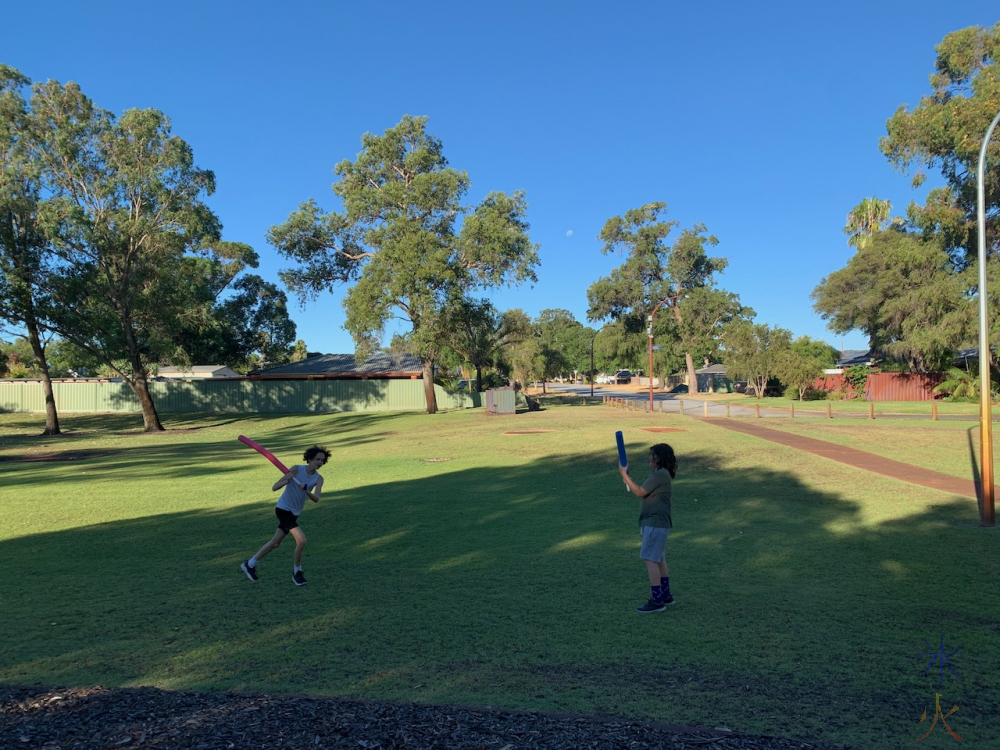 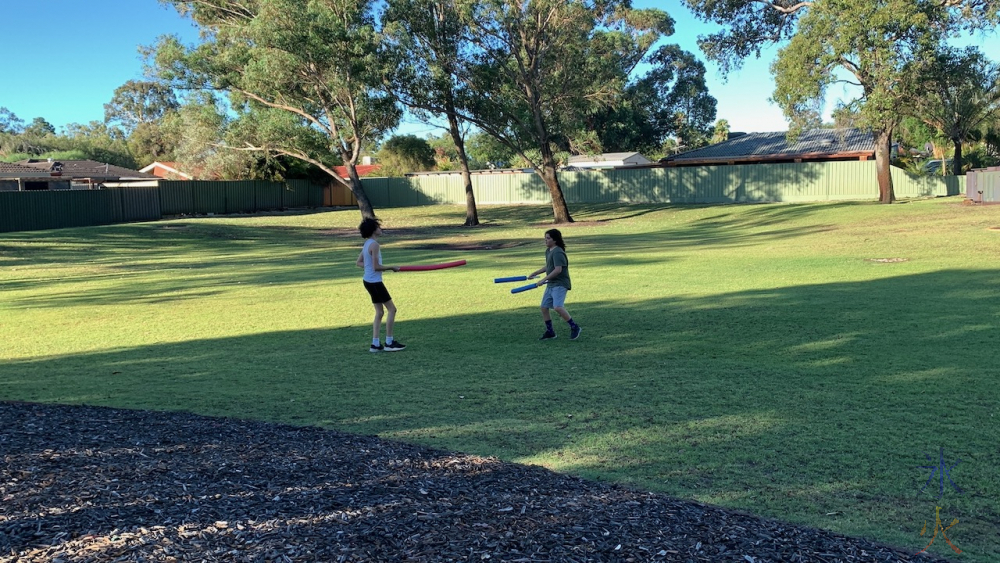 Some of it was dusting off very, very old and rusty skills (something I desperately need to do myself but probably won't at least for the foreseeable future x_x), some of it was trying to test out moves from video games and seeing which ones were plausible (from the ones they were trying, technically most of them though some of them are there purely to make characters look cool and players feel powerful, and a lot of them would actually work under extremely specific circumstances with a very low chance of encounter), most of it was just mucking around and having fun.

15yo did some origami, making a cute little heart ring. I could be mistaken but I believe this is part of the Valentine's Day present for the boyfriend.

Finally right at the end of the month, JJ has decided out of sheer desperation at the state of the world and how slow our usual methods are of dealing with things (I am still doing the usual methods), he did the unthinkable and got into politics.  At a meet the candidate event, he roped the younger two into helping out (by paying them).  When we arrived a different and completely unrelated event was also setting up but there was just one lady there trying to manage everything on her own so the kids and I did our civic duty and carted everything down for her while she started setting up.

For J's event 15yo was in charge of distributing shirts to people who wanted them (quite a lot) and overseeing the contact tracing forms, and helping with the sausage sizzle when that came out later.  She also rearranged a number of the signs around the venue as she wasn't happy with the way JJ had done it (in fairness to her, it was unbalanced, and in fairness to him, he's not so much the polar opposite of a designer as in kind of exists in a different universe altogether).

13yo cooked a lot of sausages. He did everything from the very beginning of sterilising the hotplate with lemon juice (which had to be done twice because he didn't realise he should cook the vegetarian ones first, fortunately we had brought three lemons) through to cooking every single sausage.  I helped a little bit by keeping him company, opening packets and cutting up sausage strings when I was able to stay there (I was doing some other scurrying), organising the sausages into neat little rows on the baking tray when he was in too much of a hurry to just get them off when they were done cooking and carting said baking trays back to the amphitheatre (we were on the other side of the park where the barbeques were).

Then the end of the month happened and I'm now not sure what to do excursion-wise or how to handle the homeschooling shenanigans because it's suddenly now okay to discriminate against people on medical grounds and this has basically been forced on all businesses so it's not even a case of just avoiding what you don't like.

I guess if nothing else it has led to few interesting discussions on morality, science, "science", media, propaganda, different forms of governments with their pros and cons and how well or otherwise "pure" and hybrid forms work.