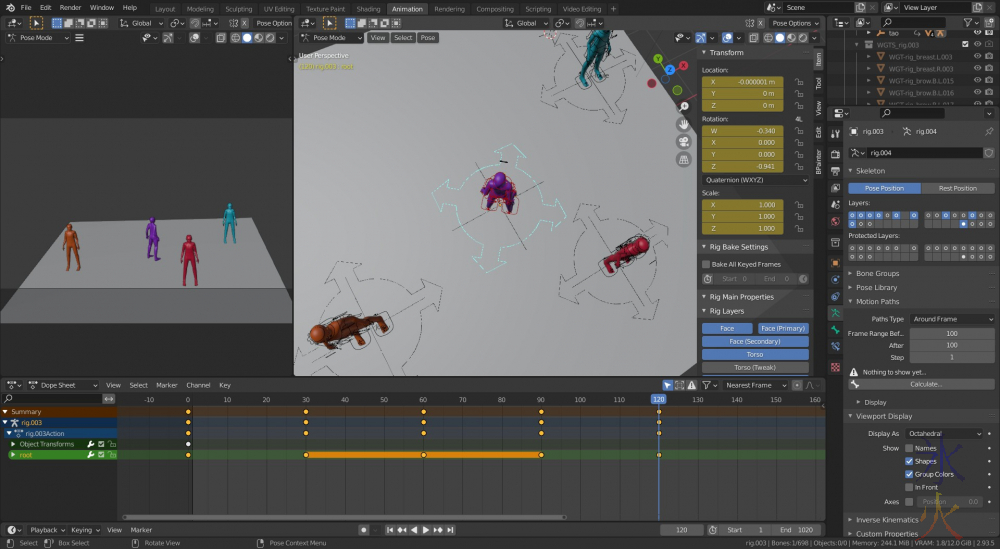 It's mostly just positioning I'm visualising as I'm just going to tell the children my ideas, though I've casually expanded to seeing if I can still animate flips (the answer is yes and I really should have started parenting to empties a lot earlier, I went through an overly long period of time where I was going out of my way to avoid adding extra things into the scene in a bid to make things less cluttered and confusing, but it's a lot easier to snap an empty to a surface and I find it a lot easier to just use the root bone when there's drastic position changes such as inverting).

I was hoping to finish it by tonight so I could show them but did not, and got asked if they could see it anyway.  I just had to talk them through it tonight and said I would show them when I was done, and I could actually finish it as we worked out that entire section in the time that we had, and I said I could throw in everything we'd done now and then show them.

I have also been spending way too much time (read: longer than a handful of hours) working on the games I'm GMing.  I'm currently running two games along the same storyline (and have just been told that the children involved in both feel capable of jumping to their other character temporarily if necessary as long as they don't have to talk to their own characters/themselves, which is fine as that's a scenario I would actively avoid anyway); one has the players as an ex-military mercenary group (I just wrote up their very long prelude yesterday), the other has them as a bunch of vampires.  It's a really entertaining challenge trying to keep everything tight and working given what players can do.  Fortunately I have a good bunch of players to work with.

And also too much time working on the dice system.

I was going to try and get back on track today and work on stuff I have scheduled to work on specific days but ended up building an IKEA desk instead.  So that's tomorrow's job (back to AER stuff which is currently that freaking tattoo).