I've since reconfigured it in an attempt to make something that was easier to learn for new players and just more efficient in general as far as gameplay goes, which in my case because I'm heavily world-building-narrative-leaning, generally means minimising the dice rolling (though the system is not so restrictive that people that like rolling dice won't be able to roll for everything if they want).  Currently I'm not actually sure if it's that much easier to learn and it may end up being crunchier than I was initially anticipating x_x Then I made it generic and modularised it so there's now a base system (getting there), a magic module (getting there), an AER lore module (working on it), and I'm planning modern and futuristic technology modules as well as an "airship pirate" module (the WoD steampunk AU I'm playing in has got me stuck with fantasy airship pirates on the brain).

Then it's going to need a lot of testing.  Lucky for me I have at least two built-in playtesters that are very likely to do wtf things and find ways to break everything.

Additionally I've decided to write up the prelude and session 1 of the games I'm running to see if anyone besides @jacobtothe and @sapadetzero derive any entertainment from it (still geeky stuff but at least narrative geeky rather than technical geeky).  It takes a bit of time to translate notes into something other people can understand x_x

I sent a still idle (and by that I mean a statue-like standing pose with no movement whatsoever), the rudimentary two step walk cycle and an alembic file with the hair information in it to the GM to see what he can do with it and see if I need to fix anything before I start making nice walk cycles.  I also tried removing permanently hidden body parts to reduce polycount and made a right mess of the hair systems (disconnecting the hair systems, removing the mesh parts I needed to remove and then reconnecting the hair either ended up affecting the thickness of the dreadlocks or made all the hair systems explode).  I'm not smart enough to figure this one out so I ended up using the mask modifier to "remove" the bits I needed removed plus a bit extra (and I have yet to see if the extra bits under the clothes I hid will affect the cloth modifiers I'm using as mask is last on the list).

While I wait for the GM to get back to me, I decided to do a quickie animation of Yue seeing something and flying away from it before getting on to the next character. 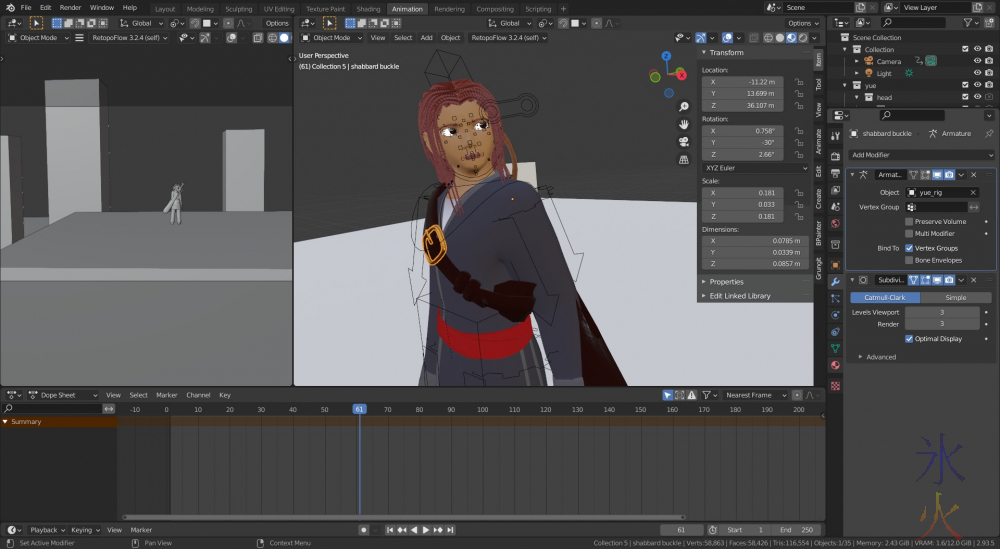 I'll probably split between this animation and working on Gundry as I need to do the anim to figure out weight mapping and yet more physics (because something seems to have changed but I'm not sure what or maybe I'm just imagining things).

On the texture painting side of things I don't even want to post screenies of this anymore but I'm kind of making myself in some attempt to kick my own arse into getting it done faster. 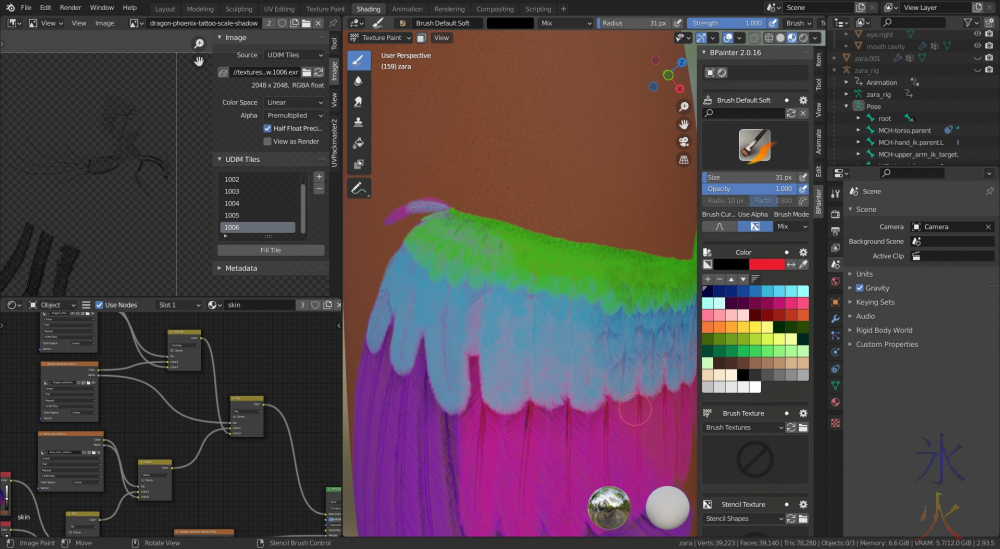 I can actually kick my own arse too, it's not the most effective though.

It's really hard to tell but I did actually get a bit more done.

Just in case I haven't mentioned how difficult it is to pick out the feathers, it's really hard to see where the feathers are x_x