So, with the sheer volume of stuff happening on the weekend (work, training and roleplaying), it will probably come as a surprise to exactly no one that I'm struggling to get progblogs out on those days.

Additionally despite knowing from a ridiculous amount of previous experience that it leads to burnout and intense slowdown at best (I can feel how slow I'm moving and it's annoying me no end) and downtime at worst, I cut into sleep time again because it's the easiest thing to cut x_x

So I guess I'll try blogging on Toolsday as it seems to be the miscellaneous day when anything and everything could happen.

And tooling might even get done because I feel like I actually made some progress for a change.

Finally finished Yue's outfit, and also made her hair a bit longer (so it's roughly at the length it is in my drawing but not nearly as long as skaterpunk Yue who had waist length dreaddies). 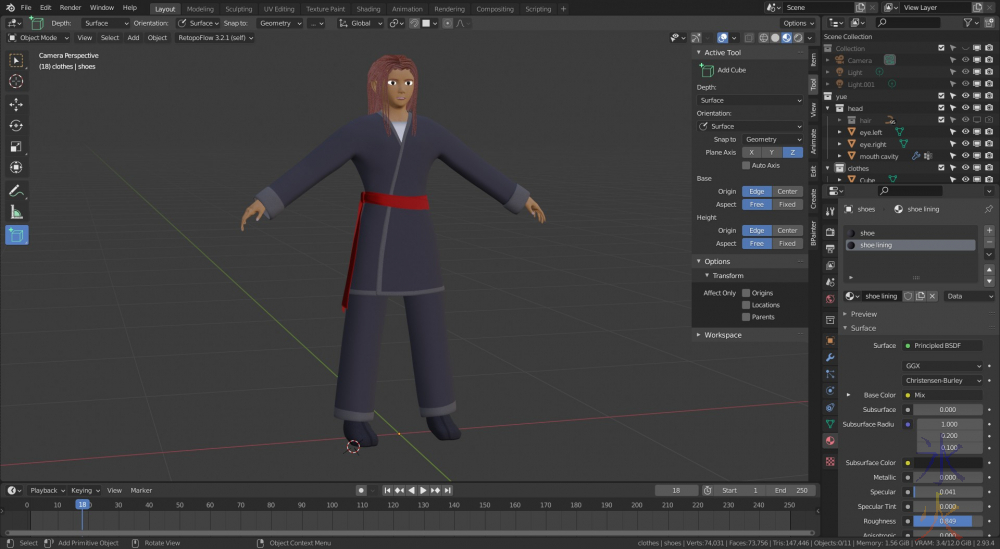 Still struggling with how thick dreaddies are.

Absolutely cheated on this sash knot. 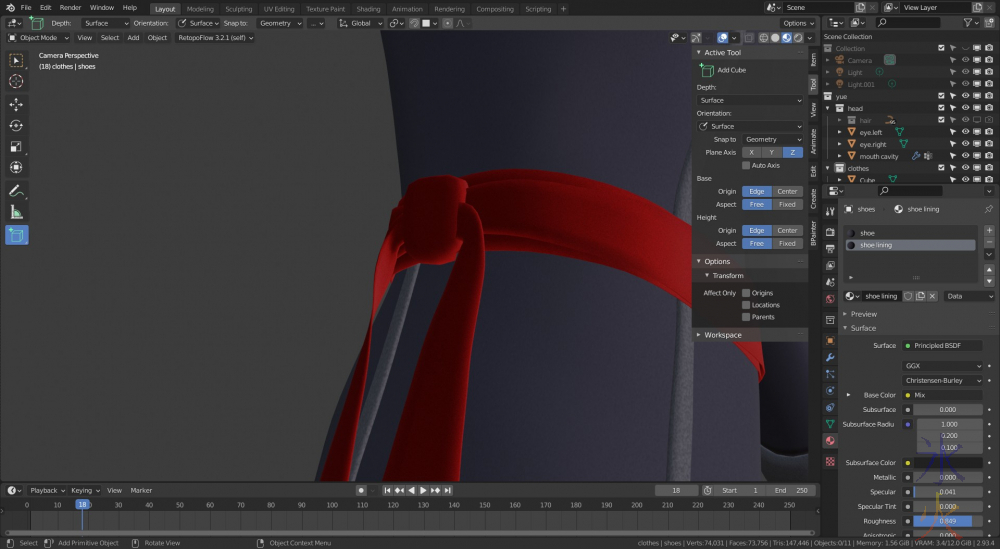 I spent one night (almost literally) trying to work out how to tie it and came pretty close but then decided that it was a problem for future fyn (who is going to be really annoyed with current fyn if it turns out to be a problem) if there are any scenes/animations where Yue needs to un/tie the sash. 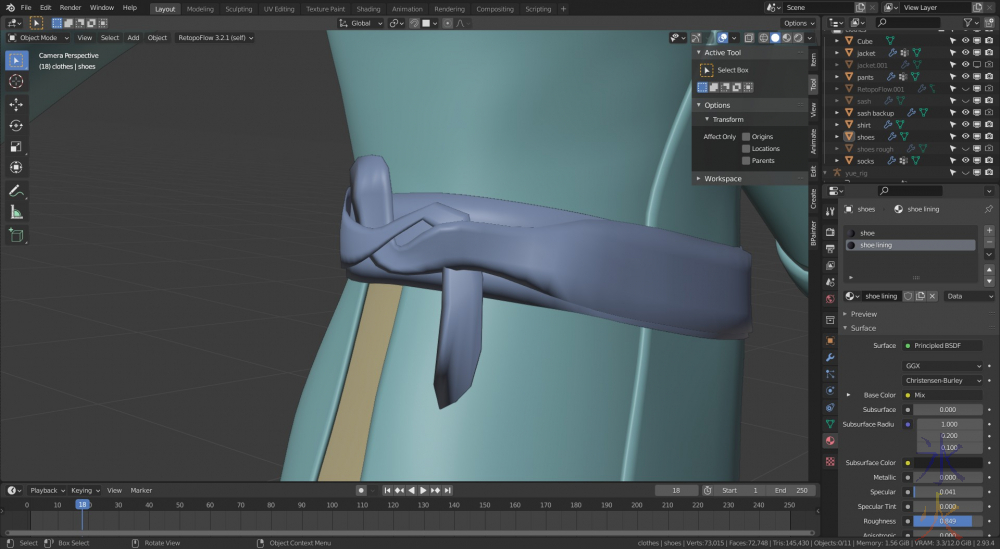 I have her pendant ocarina, airfoil and airfoil holder left to make, then I can make sure the rig is going to do its thing and then find out how much I have to rig as I think the GM wants to see how much physics will be managable. 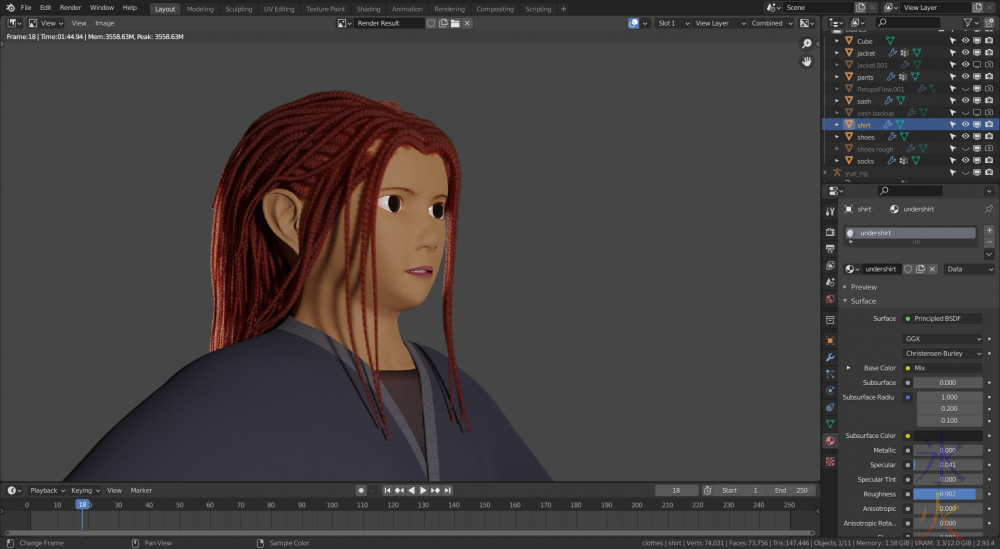 maxed out both ram and graphics card ram which moderately freaks me out as the chances of "random crash" seem to increase by quite a bit whenever that happens.

The render time though, big improvement over my last card.

And then after that I'll fork out and combine the shirt, socks (which are currently not visible but are present) and shoes with the body and leave the outer clothes loose so they can be either affected by physics or rigged depending on what's wanted.

Over with my original project, the phoenix tattoo is coming along. 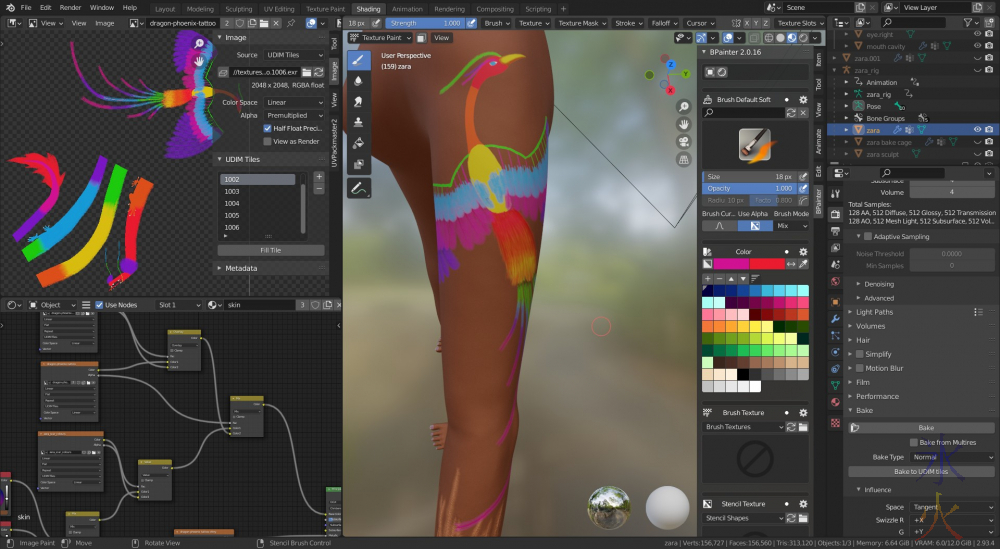 I'm currently struggling to remember what gave me the nonsensical notion that feathers would be quicker and easier than scales.  I blame the lack of sleep increasing the glitchiness of my already glitchy brain.

Purple and pink sections went pretty well and would have gone a lot quicker if I'd been able to just sit down and do it (have been having concentration issues and the lack of sleep made that a few orders of magnitude worse).  First layer of blue went well, second I realised I was going to struggle to differentiate the layers and by the third one I thought I better start shadowing. 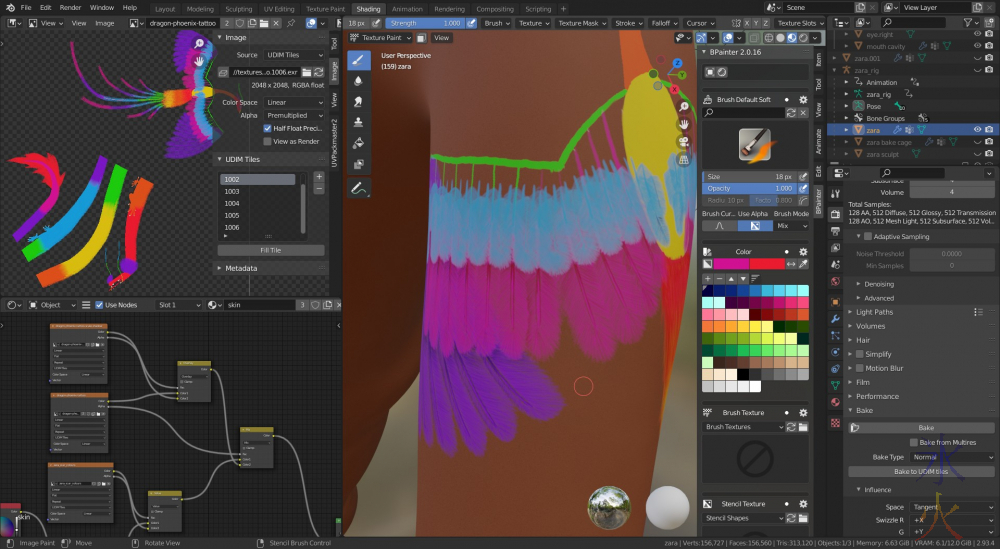 On the bright side, I'm liking how it's looking, on the downside I also realised I have to shadow the body feathers before the wing feathers so I'm just going to have to keep squinting.

At that point I stormed off in a huff...to do the tail. 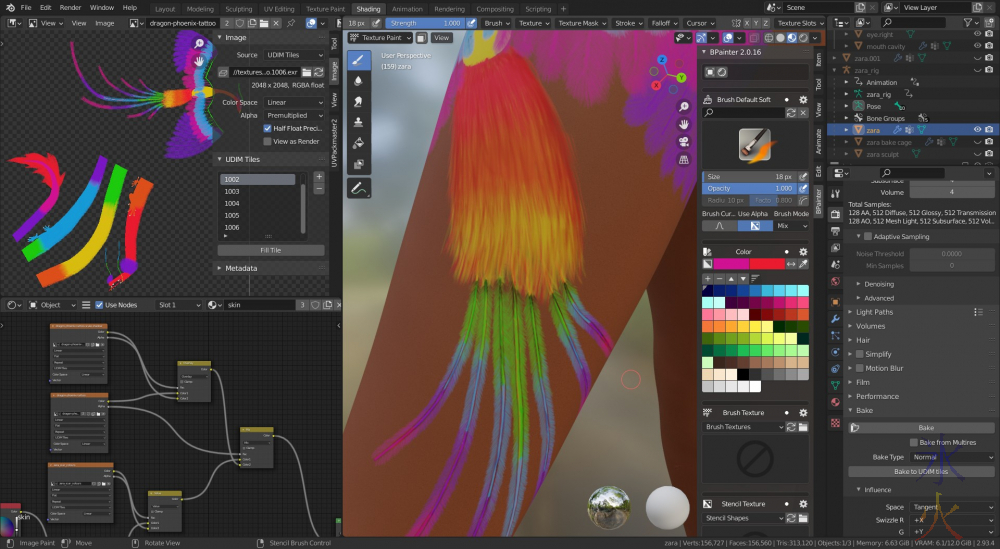 It was immensely satisfying.

In the first version of the tattoo (and probably in all the drawings I've done of it) the tail feather tips stayed pink but I'm going to do them red this time so they reflect the dragon tail (which is pink and the fluke is red which might be hard to see in the texture map as I got the pink and the red from roughly the same area).

Right now I'm trying to make Avian and Dragonkin bases, doing the Avian ones first as they're probably slightly easier.

I'm still finding it awful.  The stupidity I get up to because I want to animate something highly specific.