Along with the aforementioned (which is a normal thing that happens), the boys and I we went to the Aviation Heritage Museum (the girl refused to come partly because she does remember going there before and deciding it was boring and partly because I think she was going to AQWA with the boyfriend). I had a moment of indecision shortly after we walked in as the boys casually wandered off in different directions as different things in the sheer volume of stuff that was packed into a relatively small area caught their attention, as both of them like discussing things in-depth with me (even though I have no idea what they're talking about half the time. Fortunately that desire to talk to me about absolutely everything was what saved me having to decide which one to follow around as they both then decided to stay in the group, and while they were happy to explain what they knew to me, they found each other a much better discussion partner as the other usually had some idea of what they were talking about, and 16yo was quite happy to share everything he knew with 12yo who was very interested and who had a few gaps in knowledge.

The other thing that contributed to the group being able to stay together was 12yo generally deciding he wasn't finding things terribly interesting and drifted along with us, so we kept trying to focus on the historical side of things, and he found buttons to push which he still gets a kick out of. 16yo in the meantime discovered the engine section and was in his element. 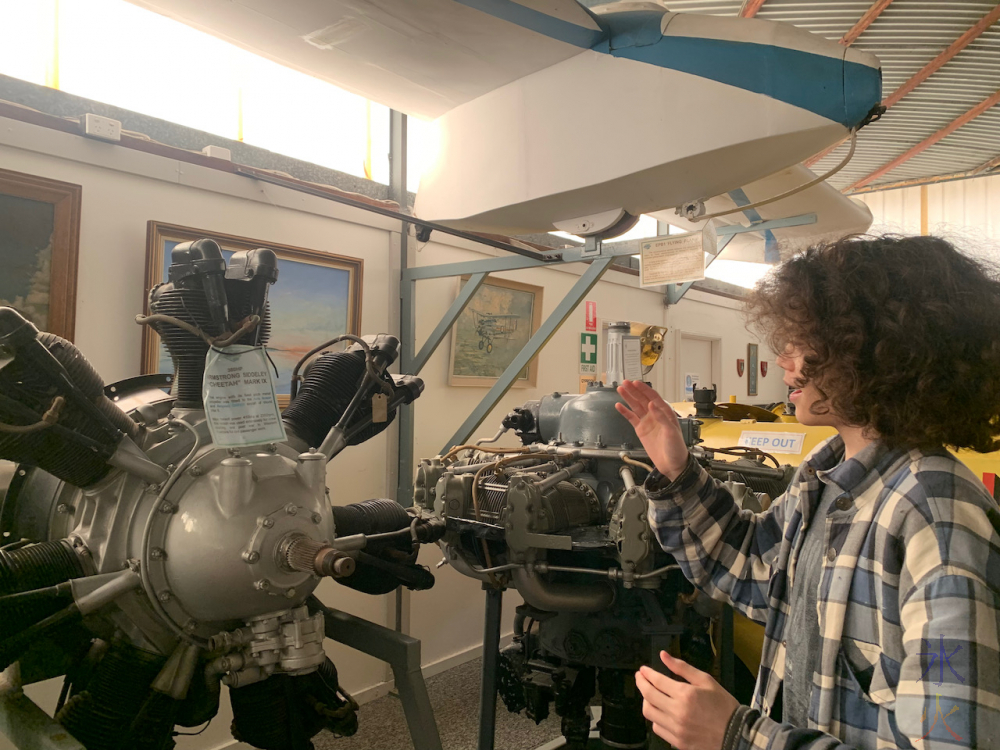 He excitedly explained to me his understanding of how the engine worked (I understood all the words but now how they were put together) and then commented that it was amusing how most of our technology was basically comprised of "rods spinning really fast".

12yo alleviated some boredom by asking 16yo a lot of questions about the engines and what various parts were for.  With the finer workings 16yo did keep saying he was making some "educated guesses" as he's not that familiar with plane engines. I told him that maybe he should consider either becoming an aircraft engineer or do either the course he was considering at TAFE or perhaps automotive, and possibly look into getting into mechanical engineering at Curtin.  I think he is considering it for next year seeing as he decided not to enrol this semester.

After we were done in the top shed, we headed to the hangar. The entry is really impressive.

Much more impressive than the photo suggests, I don't always compose things very well when I'm trying to get mobile children in a shot in a hurry x_x

12yo noticed that there was an upstairs and of course had to go see what was up there.  It was an upstairs viewing bridge (there was kind of a platform in the middle I guess) with a couple of displays on it. And a great view of everything crammed into the hangar.

The boys once more initially kept trying to talk at once in their excitement but we fell into a rhythm of one of them talking at a time and usually talking to the other one if they hadn't wandered off too far because the other one understood most of what they were talking about unlike their parent. And wherever we go, if we can get away with it/it's not completely inappropriate, shenanigans happens. Then there was this cabinet of guns and ammo that the boys spent way too long discussing.  I did try to keep up with them but failed. The museum offered some tours including one of one of the bombers in the hangar, and I'm seriously considering taking 16yo and one of his friends (who is also homeschooled and interested in many things military) on one, probably next term at the rate things are going.