It's been a busy weekend with states competitions, following a busy week of training and preparing for states competitions.  We had to skip roleplaying (for the third or fourth time in a row, previously people had been staggering being sick x_x) and there were 5-5:30am starts on Saturday and Sunday x_x as 14yo and I were getting picked up at 6am by the head coach.  16yo was sick for regionals and bailed out of states (because it's been a weird year some people that missed out on regionals due to illness or quarantine were allowed to apply to do states and most were accepted, he now regrets doing so, told him to make up for it next year).  14yo had an amazing day on Friday; managing third on vault  and beam, equal first on floor with one of her friends, and third all around.  On Saturday were just there as cheer squad.  My level 3 and 4 boys did pretty well on Sunday with all of them getting at least one medal.

And I don't have a lot of prog to blog x_x

The only major thing I've done was finish Yue's hair and somewhat adjust it a bit closer to my original design. I'm still not sure how I'm going to rig them, the GM seems to want hair physics to cover everything.  We had a brief discussion about particle feathers which I'm not sure about as my last attempt with my Avian model were a little bit messy and resource intensive enough that I decided I should probably switch to polygon feathers which wouldn't ripple prettily (which is mostly what I wanted the procedural feathers for, though I'm also not sure I would have been able to get them to ripple convincingly anyway, and more importantly they probably shouldn't be rippling that much as that would mean the barbs have separated which is apparently not ideal).

I think for both the Avian models (as in the humans with wings in AER) and the avian models (corvid forms and I guess the inevitable normal bird XD) I'm going to try a hybrid approach (probably should be doing a lot more of these, I had a lot of very all or nothing approaches previously x_x) of larger polygon feathers and particle down/fluffy/tiny feathers.  Alternately apparently particles can follow an object shape so I might try doing a helper shape as that will be a lot less messy, and if that works that should look nice. and am now working on the other side. before remembering I already have a somewhat decent long pants model and using that instead. So now I can just adjust the fit and work out shaders and then make the top.  Which I started sculpting from a cube in shape. 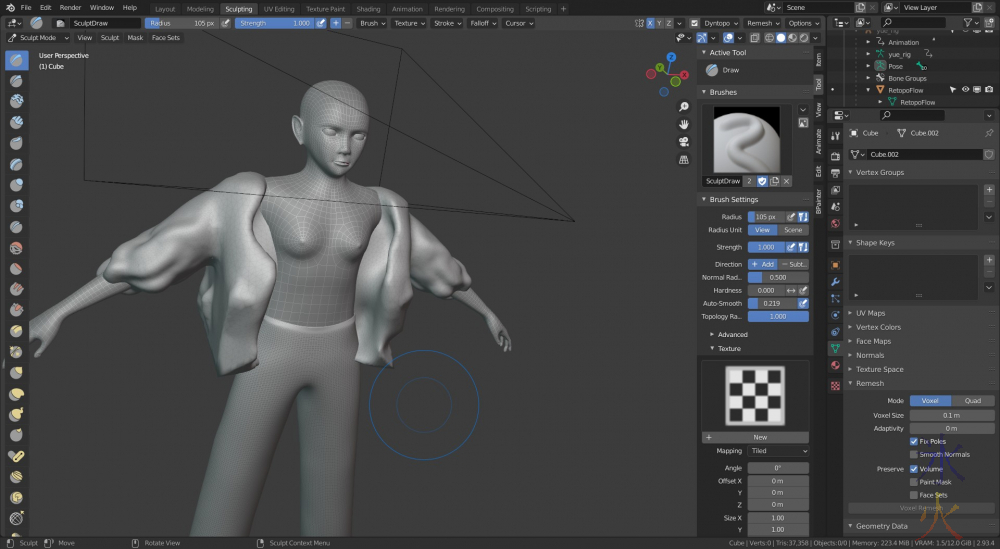 I got about far enough to do it in my head and then decided I better box model and overlap the bits after. 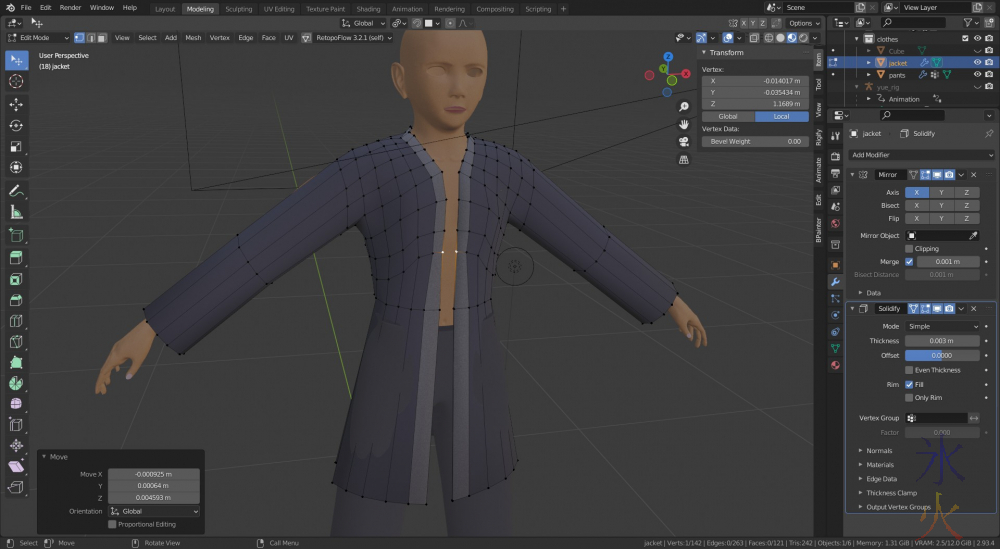 This (the jacket) is all I've managed after a couple of extremely broken and interrupted hours, but at least I won't forget what I'm doing when I get back to it.