August ProgBlog #3: where did that week go?

It was starting and I had plans and then other stuff happened and I just kind of tried to deal with things (generally failing) so kind of just buried into music (generally looping my project playlists) and did stuff (not nearly as much as I wanted, yeh I know that's the usual story, but it's even less done than usual as brain is not functioning correctly at the moment, I borked) and then suddenly it was the weekend.

To be honest a similar thing has happened over the last couple of weeks except this time I'm actually aware of what day it is beyond knowing where which child needed to be so I guess it's an improvement?

I'm going to try switching up the schedule again to:

Saturday:  steampunk WoD (now also known as UASG - Unnamed Anime Steampunk Game - which is what the GM has called it in the Discord server he spun up for it)
Sunday: UASG and progblog (because it seems to be bleeding over into Sunday anyway and I guess it works as it gives me that last few extra days to try to find something interesting to cram in)
Monday: UASG
Tuesday: tooling/requests/commissions (tooling is generally making bases, props and sets as my attempt to split between props/sets and characters on the same days isn't working)
Wednesday: AER and ko-fi update
Thursday - Friday: AER

We didn't have roleplaying yesterday (and may not have it again today) as half the players have been down with something (it is flu season) and didn't quite feel up to it.  Theoretically this should allow me to catch up with everything that hasn't been done from last weekend but we'll see what actually happens x_x

Anyway I finished all the scales and I'm making hairs shiny now.  When I started writing the progblog I was in the pretty blue section. 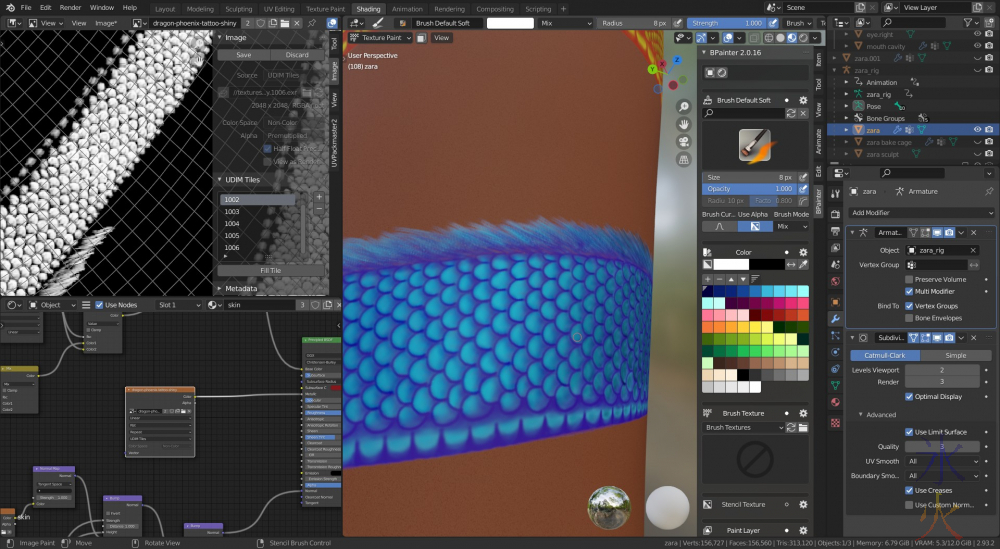 I do like shading hair though this is slightly confusing as the metal is only shiny from certain angles and from other angles it looks darker so I occasionally forget I'm working on something light reflective. 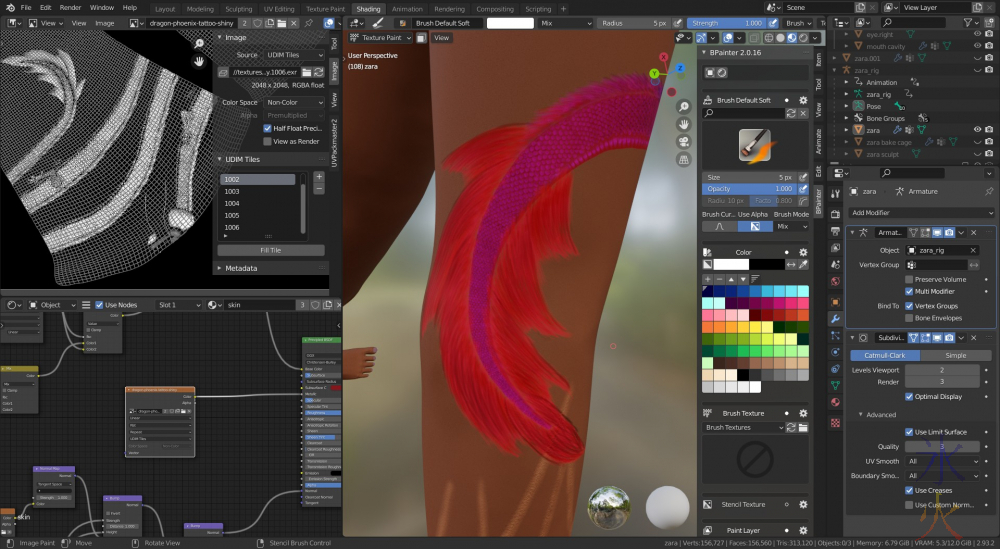 And I like how the metal map looks (there's just something about white on black drawings that's really cool but also something I can't pull off very well if I set out to do it deliberately).

That one is now finally done (for the second time >_<) and I will be switching back to the colour map to neaten some things up and then start the phoenix.

On the UASG side of things, it's gotten entertaining.  Last night, I was just trying to get shapes right and having the usual epic battles with failing at making the mesh perfectly smooth. 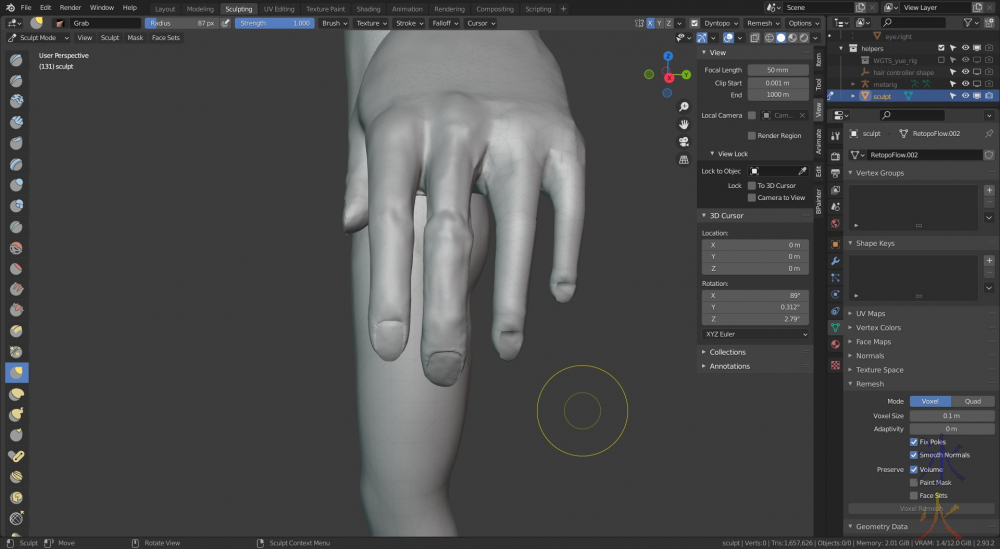 I was vaguely chatting with sibling dearest during project chat (yay for it happening, now all I have to remember to do is go to bed) and vaguely had and mentioned the idea of using the multires modifier to do some quick and dirty work on background characters especially on the hands as I am spending an inordinate amount of time trying to get fingers and toes looking good.

A related tangent: I have been doing things the way I'm doing them because historically I haven't been able to make the multires modifier work for me, I found it to be very blocky and I was unable to get the detailing I wanted, so I just stuck to straight up sculpting.  This was however probably a decade ago give or take, and Blender has improved massively and I'm slightly better at modelling and I have a much, much better system now, so I thought I'd give it another crack.

Seeing as I have decent topology now, it's so far working out a hell of a lot better, as my tests (which I didn't screenshot) on the base mesh's hands seem to indicate.  As an experiment I versioned Yue and pretty much started again, using a subdivision level of 3 (which I think is what the subdivision surface modifier is on anyway) and it's actually going okay. 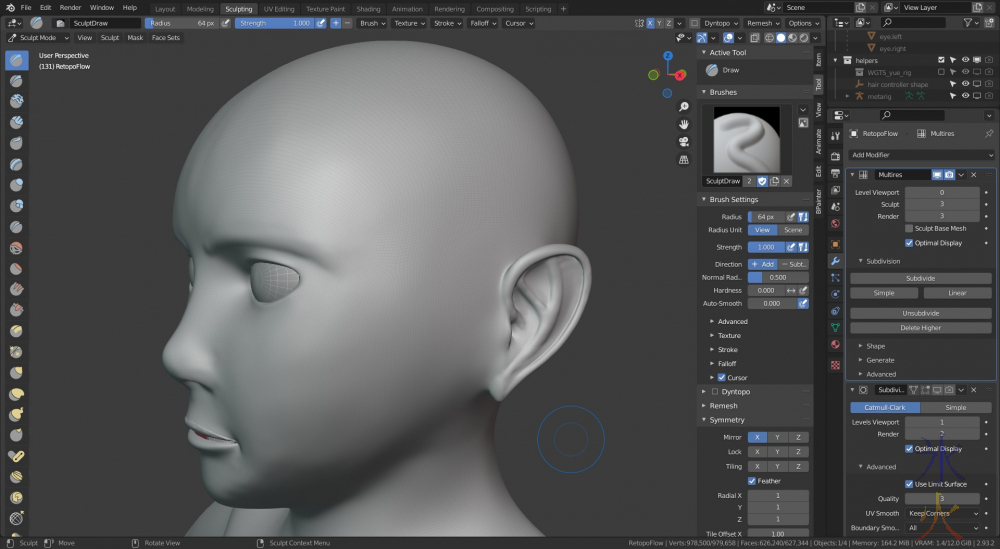 I'm getting enough smoothness that I could probably do normal maps which included scars.  This is pretty cool as I remember it being blocky before even if I bumped the resolution higher than my computer at the time could manage. 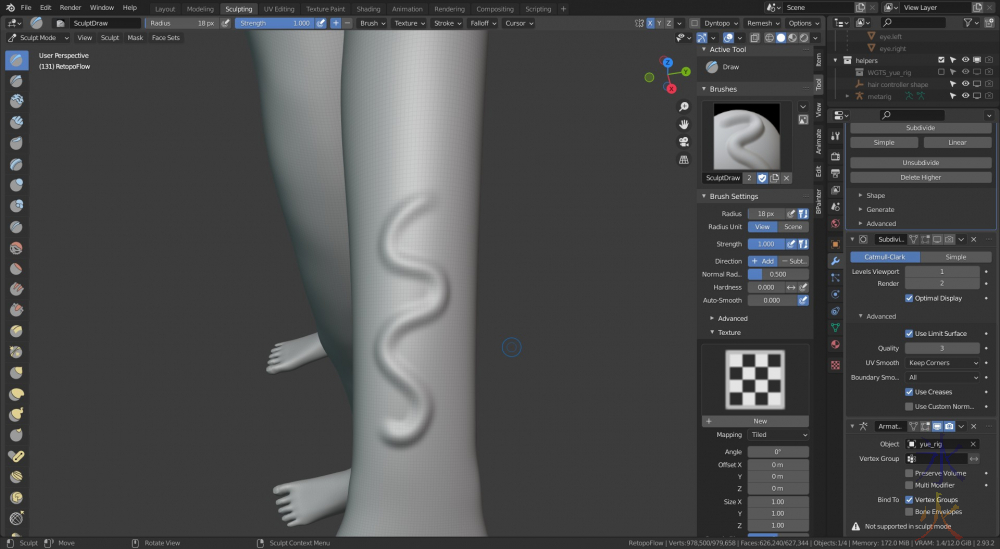 I'm still currently undecided whether I do separate normal maps with and without scars or whether I stick to what I'm doing which is just painting scars as  bump maps so I can detach them easily.

So current plan is how quickly I can knock out characters if I'm multires sculpting instead of dynatopo sculpting.  So far it's looking good, this thumb for example took minutes rather than however long it normally takes (sometimes hours because I get bored and go do something else x_x) because I didn't have to fix the nail edge (which needs to happen about 98% of the time give or take when I'm dynatopo sculpting). 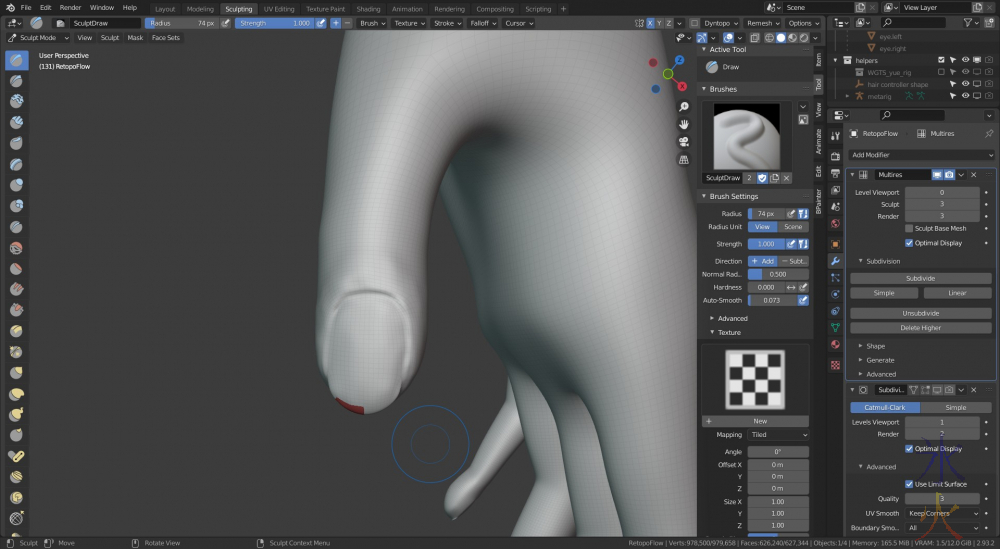 I'm going to feel dumber than I already feel if this works out the same or better (the last thing I will have to test is whether I can get a decent bake as the baking process is slightly different).