It's been a few weeks.

And then I finally got around to writing this thing, and was making some half-decent progress (while chatting to sibling dearest in our inaugural hopefully weekly project chat and progressing some other stuff as well) and then had one of those infuriating semi-frequent crashes that refuses under any circumstances to be diagnosed (it's probably hardware because there is literally nothing that I am doing that can reproduce them reliably).

Some good things happened too.  I got a new graphics card, which I of course had to test out on the top of Acaedia where there's a fair bit of glass.

57 seconds.  Last graphics card took a bit over a minute.  The difference doesn't sound huge but trust me it makes a massive difference when you're rendering an animation.  This was on the "preview" settings which renders quickly but ugly and as the name suggests is just when I need to see what the textures are looking like and/or when I want to test animation timings (because the anim preview doesn't always play in real time).

So of course I had to try one on nice settings with denoise.

For comparison cpu render takes 2:20 on the preview settings.

J seems to find it terribly amusing whenever I'm stoked about something and it has nothing to do with the sheer volume of gushing or the cheerful prancing around the computer room and bouncing on the furniture.

I've been neglecting work on Acaedia (or anything else that isn't directly related to characters x_x) as I got a bit obsessed trying to get the stuff I was redoing redone, but was forced into it when I had to update UVPackmaster2 (because Blender had updated and the version that I had wasn't working with it) and had to buy a new engine BUT I didn't have the funds at the time (all the money disapparated, had nothing to do with crazy weeks >_>).  Most of what I ended up doing was straightening up the top garden wall (there is a lot of straightening of walls that needs to be done, a lot of the ugliness will probably be hidden by plants as there's vines growing all the way up) and trying to work out the walkways down (I did have walkways in place but they're not working out as well as they were in my head x_x so they're getting redone from the top down as I probably rotate the other floors whereas the office at the top has some very specific directions it's aligned in and the walkways have to line up with that).

The redoing is getting redone.  I'm not sure if I'm doing the metal map "right" (mostly because I'm now used to stringing a lot of nodes together and this thing is directly plugged in) but it seems to be doing what I want so it can stay as is at least for now. 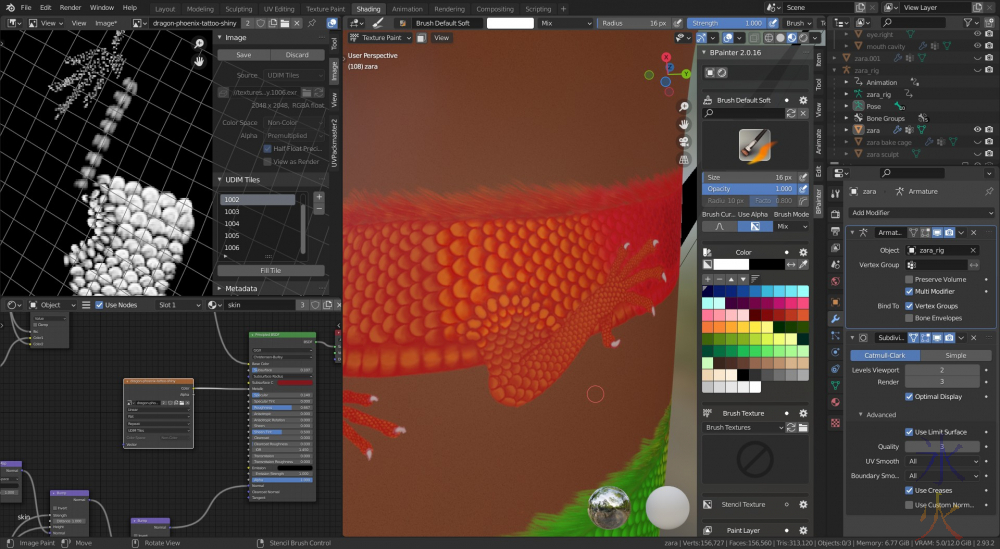 I am actually well into the yellow section now, I took and saved this screenie earlier in the week as I was marvelling at and wanting to show sibling dearest what a massive difference it made to the orange (it's not really that noticable in the red and yellow sections).

Meanwhile on the other project I'm supposed to switch the art test character to Gundry from Yue so we can see which way we want to go basically by deciding which type of scar appearance we like better.  Given that the GM has suddenly decided that Gummow should be covered head to toe in very intricate tattoos (doesn't actually surprise me in the slightest with that character, though that came about with my complaining about this very tattoo that I'm working on right now up above) I feel like I just want to stick with the Advent Children style and finish Yue (because I don't like leaving characters partially done).

Because I was seriously considering switching though, I made a uv map on the default female character which hopefully fixes the minor issue I found when doing the dragon tattoo, and then reconfigured the chest area to make a male base, so now I have two Terran bases with hopefully a decent uv map (which should hopefully speed things up and hopefully the uv maps I have now are good aaaahhhhhhhhhhh).

I'm currently trying to use Retopoflow to modify copies of those bases into Dragonkin and Avian bases but because of how Retopoflow works that's proving to be a lot more challenging than I was anticipating, so has become a problem for later in week.

Meanwhile where I'm up to with Yue is still working on fingers and fingernails (I'm not detail obsessed in the slightest, I have no idea what anyone is talking about). 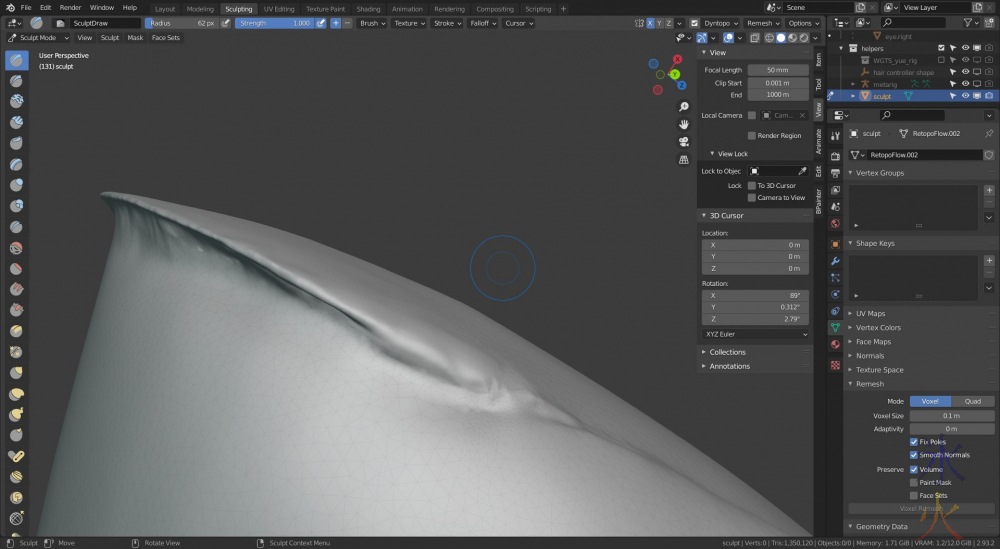 I'm also cursing the failed experiment with relative detail and really wish I'd just started out using brush detail like I did before, because I have to smooth out a lot in the arms at the moment.

My biggest concern with using the Advent Children style in a game is I don't know how to make good looking polygon hair and have actually developed a very strong and still active hatred for it, even though when I was last learning how to do it was a very long time ago and things are probably different enough now (including my skill level) and I really should try again, but I really don't want to -_- After some angsting though I think I will do the double workload and make myself characters with particle hair and floof purely to make myself happy, and models with polygon hair/floof that a game engine will be able to tolerate.  I will probably be regretting this decision down the line.

Sometime this week I'm also going to start a script for storyline and dialogue for an animation/series as I figure that will probably be adaptable to a game (and maybe I'll remember how to write for games as I seem to recall being able to do that at one stage, I suppose I could look it up as well but) on the server so the others can edit it as well to drop in dialogue and actions for their characters, and I guess that will be a work in progress for however long the game (and possibly interest in the project) runs for (at least the GM has realistic expectations unlike some other people I've worked with previously).

I probably need to make a new category for this new project at some stage.