By popular demand (which was to say three teenagers screaming stuff along the lines of DO IT DO IT in the chat, and that came about because other-16yo posted a picture of an Eevee which is my favourite Pokemon ever into the chat and said Yue's Kyubi form should look like that and I said it was kind of tempting to make her a Fennec fox), Yue is now a Fennec fox instead of a normal red fox (GM says he is making them canon for the steampunk AU but I'm still calling her Mary Sue Fox because the Hengeyokai book says Kitsune are only red foxes, and saying it would explain why these eyeballs that are probably spying for some stupidly powerful mage in the Umbra that she stepped into in one session were so interested in her, probably wondering what the hell she was XD).

I also said that the Fennec markings make her face look a bit like a Kabuki mask. Poor sibling dearest and @zeroOoC were doing such an amazing job trying to be helpful and pointing out all the bits that were messed up and I had to be a brat and tell them I was already well aware of how messed up everything was as I was using a very old model as a base and the proportions on it are just wrong for the most part, and I was entirely too lazy/really mostly wanted to get these done to fix everything that was wrong.  I technically have a female Terran base already that I could rig and use but I'm waiting til I have a male one and am going to rig up some new bases in pairs, and then hopefully my drawings will look much less horrible.

I've been semi-seriously toying with the idea of 3d-ing these characters and seeing if I can figure out lineart and cel shading in Blender.

Because I totally do not have enough to do right now.

Meanwhile I'm trying to work out how to shade the second one and whether I should keep the lighting consistent with the first picture or whether I just light however (what will probably end up happening) and also given how clumsy I am with this style of shading, how I'm going to work around the markings.

MEANWHILE what I'm ACTUALLY "supposed" to be doing (I guess technically I don't "have" to do anything but then again I do if I want to do what I want to do sooooooooooo) is this neverending story. When I've had enough of screaming at it (I find it astonishingly difficult to draw them at a somewhat consistent size), I backtrack and scream at this instead. 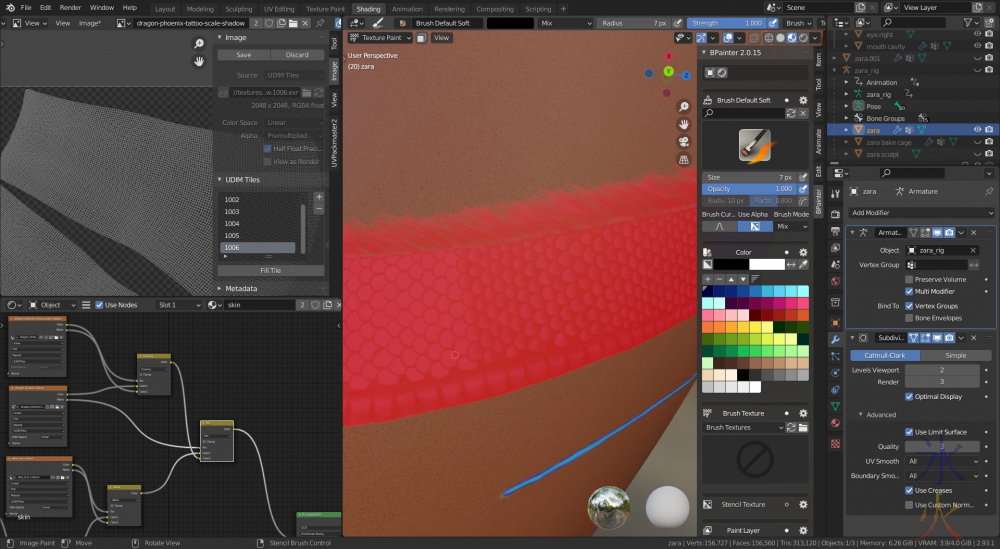 That's shading the scales in case you were wondering what you were looking at (and I don't blame you I don't know what I'm looking at most of the time either x_x).

And rinse repeat back and forward so it's basically silently screaming all the way through.

And not to mention the fun of working out how to change the direction of scales for the legs. Couldn't be a fluffy dragon could it.

Just in case you're wondering why I don't just change the design, I don't have any control whatsoever over these characters or these storylines, I either do what they want or it doesn't work XD