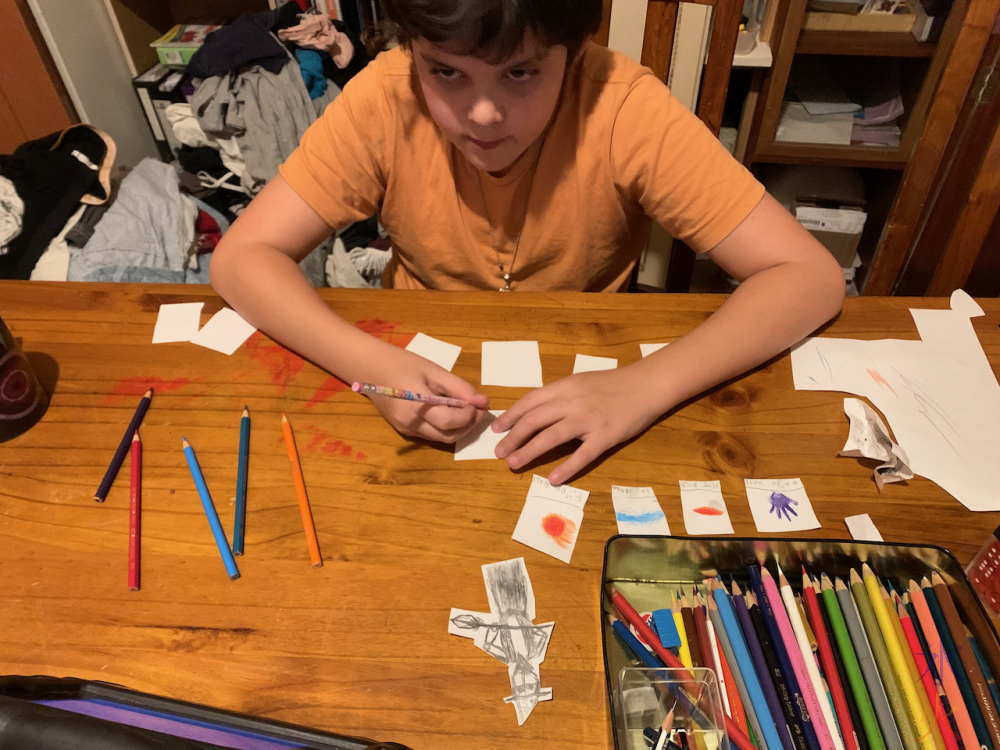 We received an Easter box from my mum t hat had some bottle protectors in it (as it contained beer).  12yo started wearing them as arm guards, and then utilised various boxes we had to make another suit of armour. Each suit of armour has slowly been an improvement on the last one.

He's also been reading a lot more; reading and rereading the Scurry series after we bought him the last book, and buying and reading various DnD books and coming up with ideas for characters and campaigns.  Unfortunately for him I won't run a game or play with him because I really hate that system.

We have been playing World of Darkness with 16yo and a couple of his friends.  I have told them to keep notes but I think they're only keeping on top of important things like how much experience they're earning and how much gnosis/faith/quintessence they have left.

Only vaguely related I actually need to do up character sheets for some of the important npcs and antagonists now that the group is working somewhat together rather than fighting with each other which is how all my games seem to start XD and they've attracted some unwanted attention because THE VOICES DEMAND BLOOD KLAUS (quote from the 18yo's character Maxwell who is a mage, speaking to 16yo's character Klaus who is actually a demon possessing the body of Klaus but the other characters aren't aware of this yet).

As the older group members haven't consciously realised 12yo's character's most useful skill yet (and doesn't help that I got him to play a character his age as the others are playing much older adult characters and struggling) he's not had a lot to do aside from random errands.  I've recently found the rpg notes I was writing for an rpg set in my head-universe which will need some revising, then I asked him if he would like to help me play test and continue development, which he was quite enthused about.  I'll have to see how I go timewise though, it's getting difficult doing the stuff I'm already doing, not sure if anything else will cram in.

14yo made a fairy guarden with a jar, a fairy figurine and various items sourced from a park down the road, and a frog and lily pad out of clay. She has her gymnastics beginner level certification (unlike 16yo who is annoyed because there's been a system update or something since we did ours and he's been completely reset and has to do it all from the beginning again and so far hasn't bothered) so now we're all waiting on the prac.  A lot of notes were taken as unlike 16yo she couldn't remember all of the information that she read before the quiz, and unlike me didn't have the life experience to work out everything from common sense.  She's quite used to taking notes as she keeps quite a lot on cosplay plans/designs and does the bullet journal thing.

The small two are doing Skwirk but usually have to be reminded.

14yo has been looking at applying for jobs (so far one has been applied for) and we probably need to have a chat about whether they still want to do the early learning course and if so, we should check out the TAFE down the road and have a chat as it's a thing that can be started next year.

16yo has continued to think about applying for jobs but hasn't actually gotten around to doing it.  His current project is playing the stock market in Warframe (some game he has intermittently played previously but really gotten into recently) and it's involved learning how to use spreadsheets.  I'm trying to bully him into writing weekly reports about it.

This was our first impression on approach from the Perth train station. 16yo's comment was that it looked like a dodgy Minecraft build.  Meanwhile I really wasn't sure how to feel about that thing looming over the original building.  We vaguely tended in the direction the main entry used to be and then noticed it had moved, so walked through to it with 16yo making comments about the architecture on the way through, such as where they'd the lower passage connecting the two buildings out. Happily they were careful about the ancient grapevine. It even got a nice new frame to climb on, though I feel that it looked like it's recovering from the trauma of the craziness that was going on around it while the museum was being rebuilt/refurbished.

We asked the lady at the counter what the best way to tackle the museum was and she recommended heading to the top floor and working our way down so that's what we did.  On the way up, we noticed this boat dangling from the ceiling, 16yo wondered if it was a whaling boat and then we got into an in-depth conversation about Moby Dick, with 16yo saying he was had found out from somewhere that whales interpreted some noise the whaling ships made as aggressive whale sounds and would come charging out to attack them, ram the ship, then get confused or angry because ships don't feel like whales. 16yo really appreciated being able to spend as much time as he wanted looking over displays with me, as normally when we had youngest with us, he would often have a brief look and then want to rush off to see the next thing, so what would usually happen is that we'd keep up with him, or the bigs would wander off so they could look at things at their own leisure but without me as I was usually having to tail youngest, and we'd meet up somewhere later.

16yo called this bit the "anti-[14yo] section", as we anticipate she would be thoroughly squicked out and probably leave that entire section when she sees this particular display. 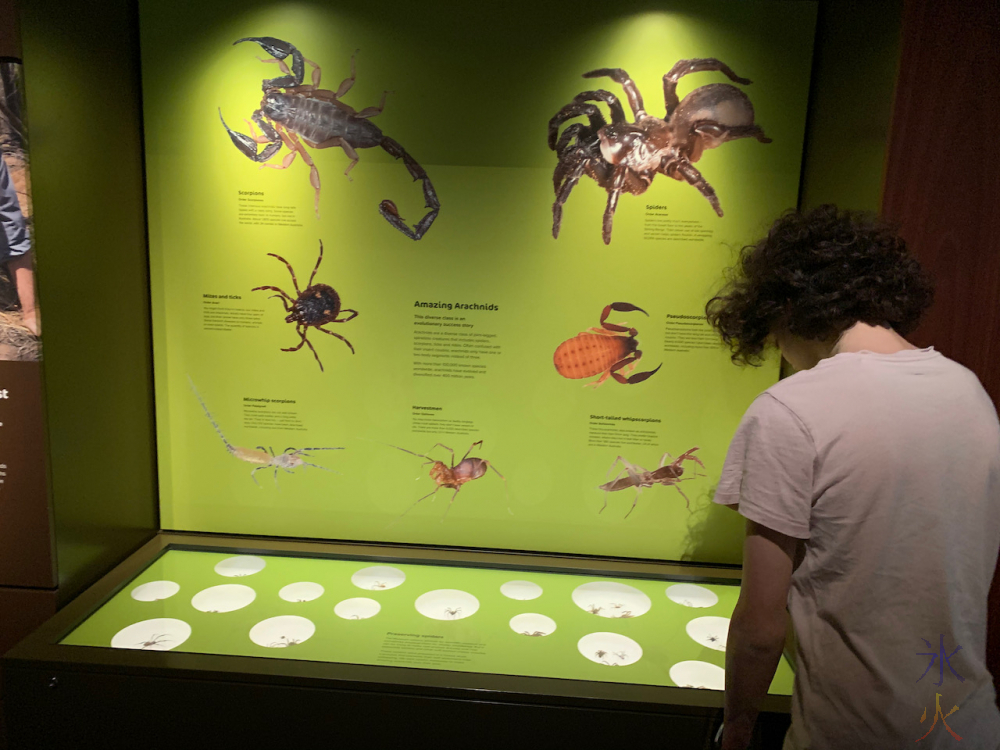 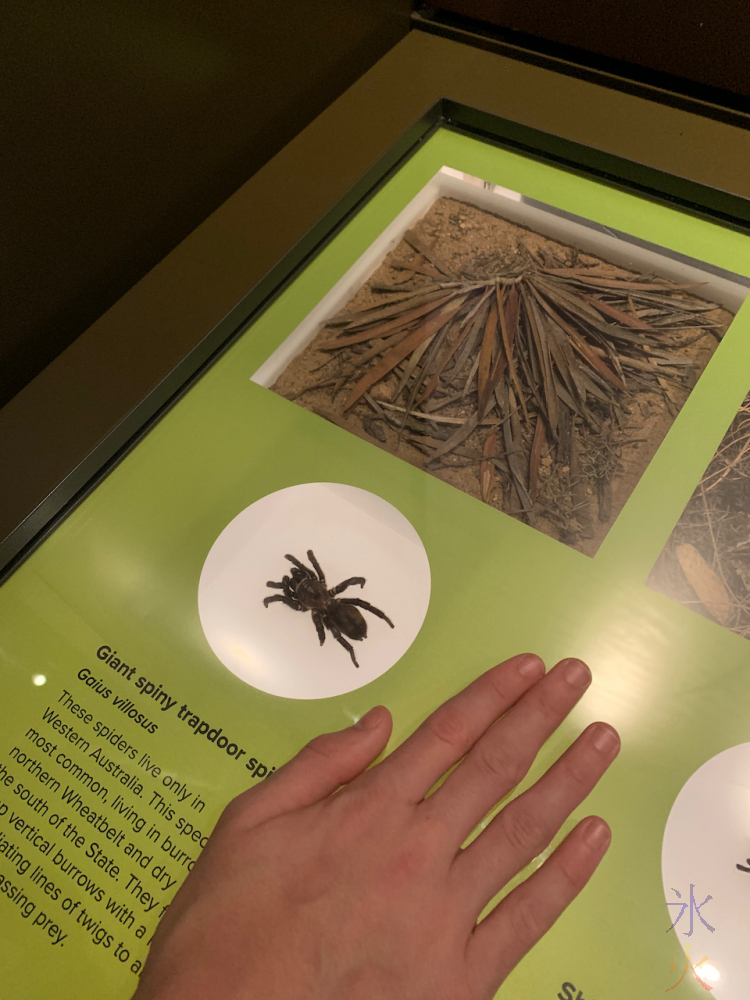 The wildlife section was pretty cool as there were also small displays and information panels explaining how the animals and plants were taxidermised/preserved or otherwise had realistic looking models made of them.  16yo tried his hand at identifying a lot of the animals and plants he was looking at before checking the informational signs to see if he was correct.  We also had a go at the interactive displays, they were pretty boring but we assumed they were made to be easily accessible to very young children and people who didn't know anything about the subjects. 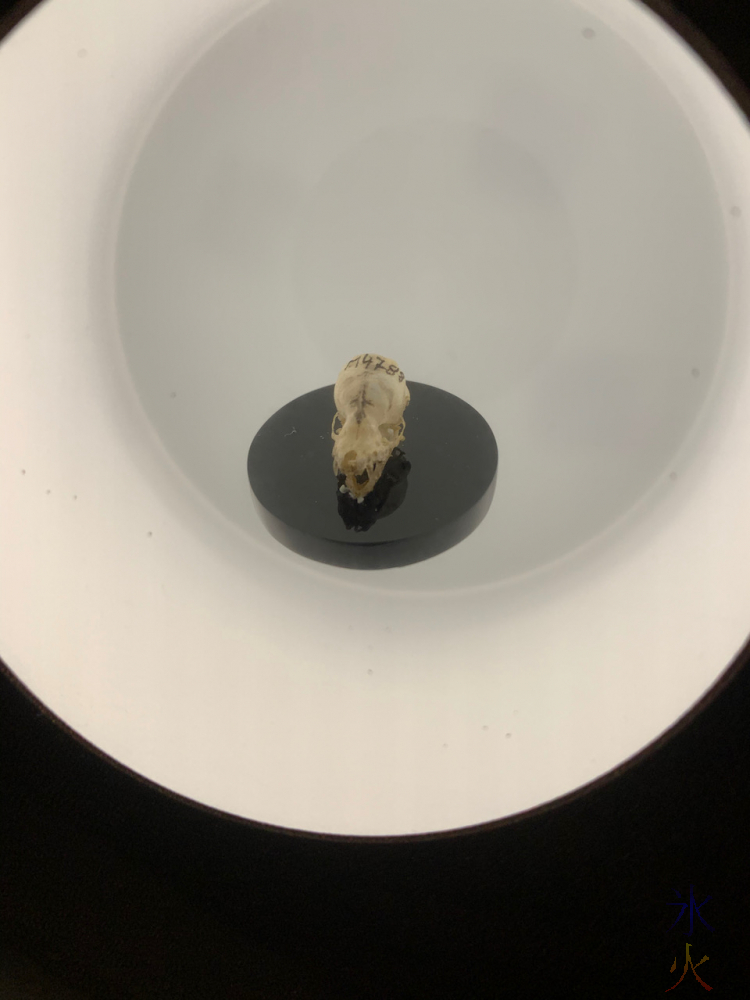 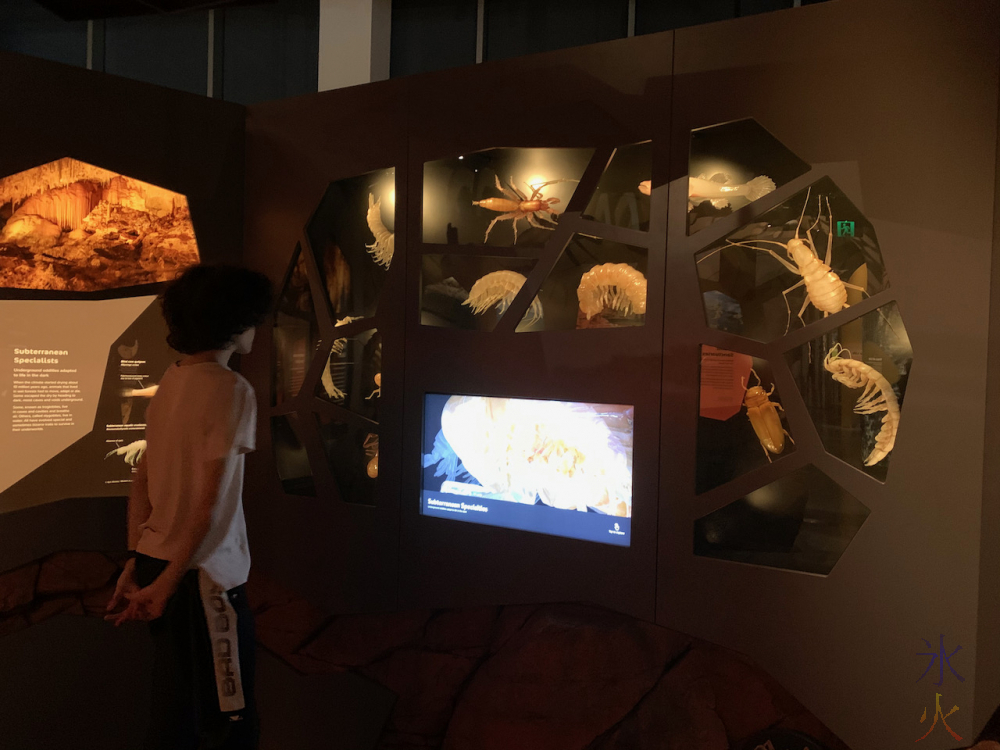 Then a couple of school groups came in and after a quick stopover in an artistic tingle tree model/sculpture, 16yo bailed out into the next section. The next section was the prehistoric section containing all the dinosaur models, as well as a projection display that made whoever walked across it leave dinosaur footprints and possibly occasionally cause a flood (it happened when we crossed paths with a couple walking in the opposite direction).  16yo read almost all of the signs, and we spent way too long trying to calculate the mass of a diprotodon femur. 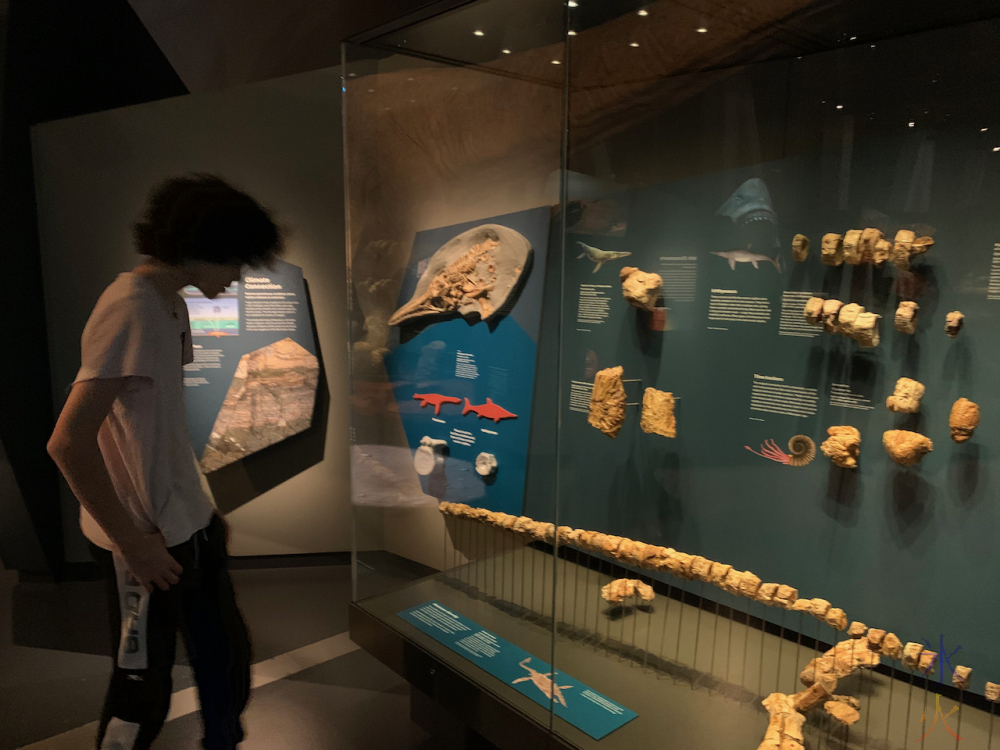 And of course while we were there I had to grab a photo of the ammonite for @ammonite. 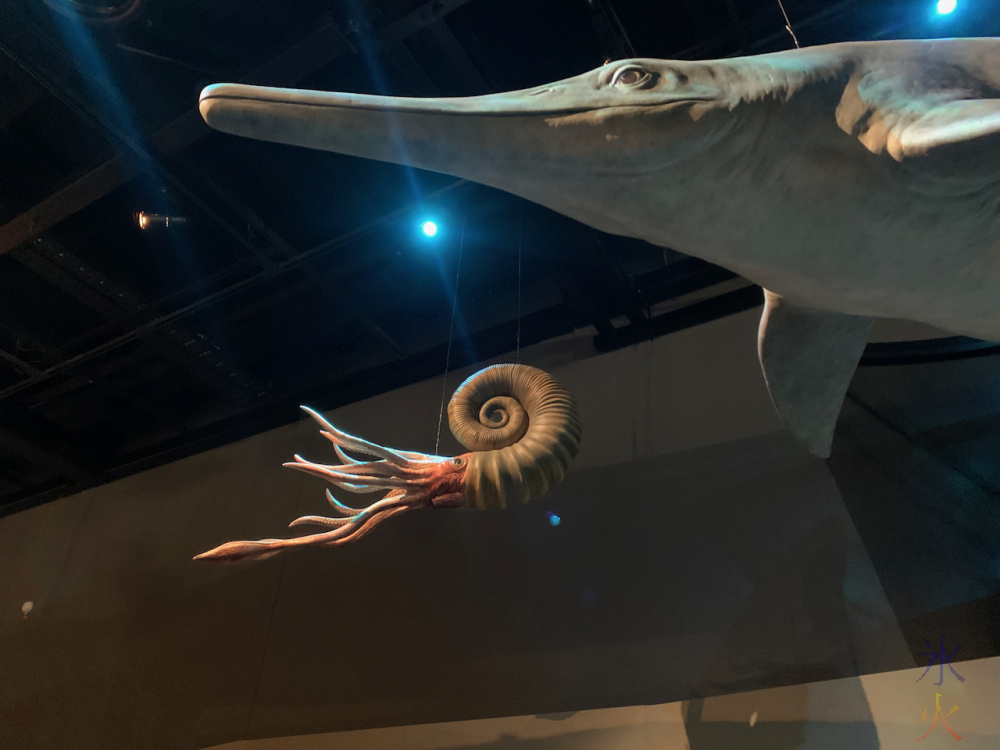 Next section was a fairly recent history/current times section which 16yo had a quick look around in but said he wasn't really that interested in recent history, so we moved on to a section that discussed oceans and weather, and he had a bit more fun with the interactive displays here, learning what goes into the formation of a cat5 tornado and how various beach and wind conditions makes different types of waves. 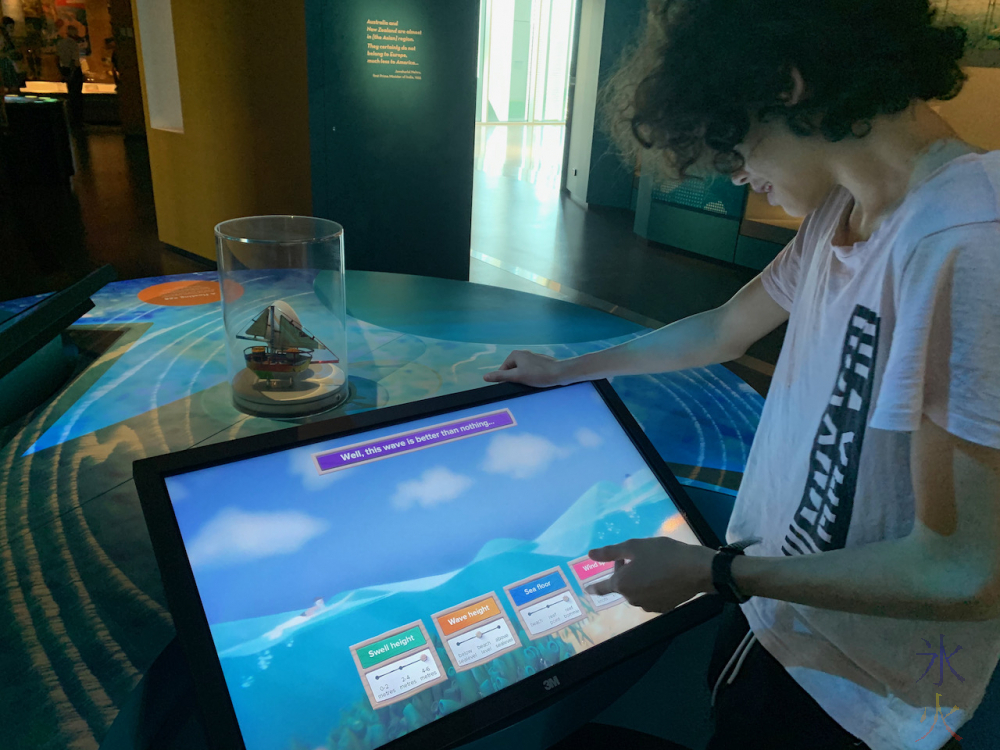 The next section contained some geopolitical displays, the main interactive one contained information on Australia's various relationships with the rest of the world.  16yo spent quite a lot of time on it. There was also an oldschool Snakes and Ladders board that we spent some time playing before moving on to the set of blocks next to it as I remembered having or at least playing with a similar set of blocks when I was little. We moved down to the second floor (stopping on the way to admire the view down) into a section about agriculture and mining. 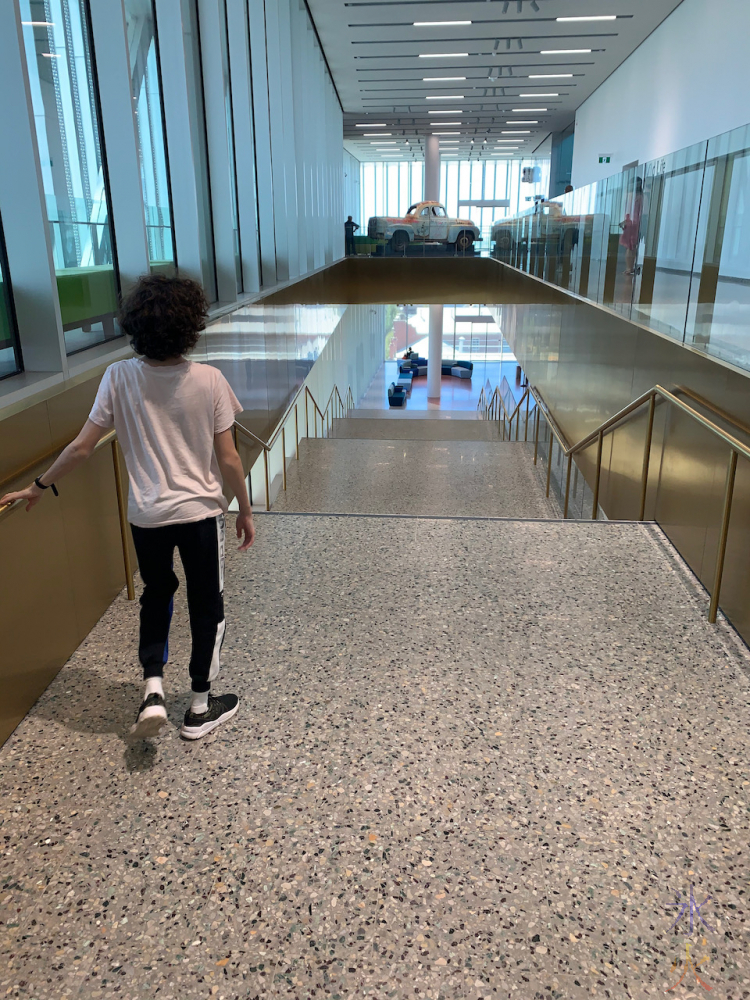 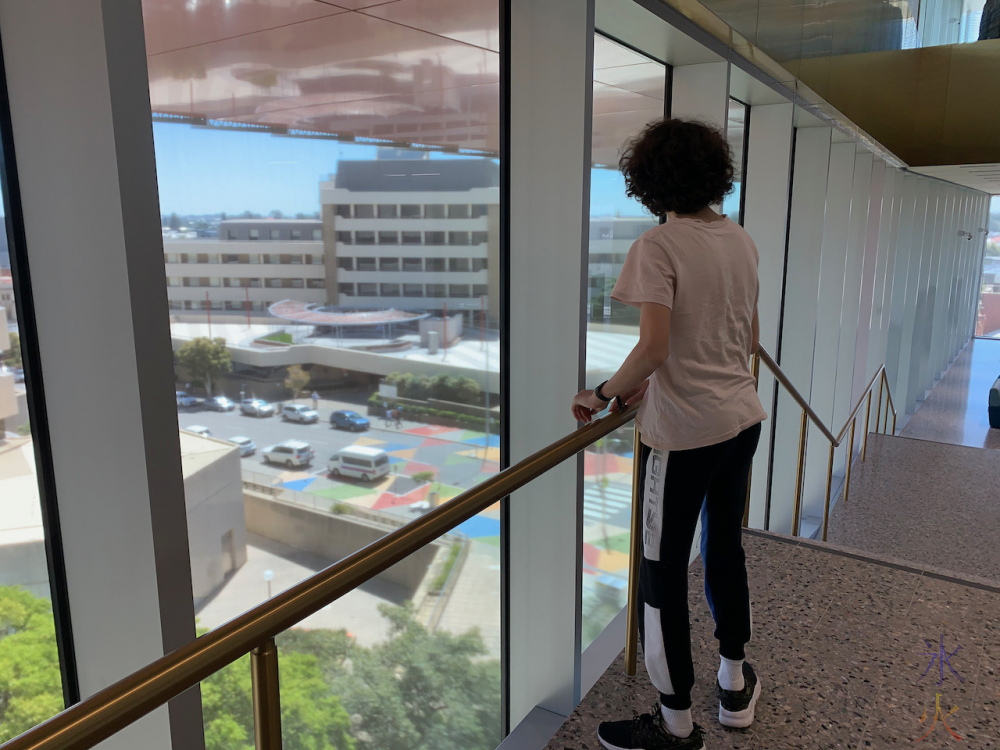 I was so annoyed by the 5 tonne steel ball that destroyed forests that I didn't take a photo of it.  16yo said as a piece of engineering/technology it was quite impressive for its simplicity, but other than that agreed with me that it was horrifying. He was quite interested in the stuff that gets mined, and spent a good deal of time telling me about how Australia was the main producer of gemstone opals in the world and how much it produced and possibly where from. He was initially disappointed at being unable to find any opal sites on the interactive mining map until it clicked that it was a section of Western Australia he was looking at.

It was around this point that he realised that he was hungry and that we had been wandering around for 2.5 hours.  I asked him if he wanted to go see the blue whale skeleton, and he said no, he'd like to save it for next time and he was looking forward to a return visit to do more/the rest of the museum.  We went for lunch at Subway where it was mostly eating and and some alternating between talking about the museum and talking about video games before jumping on the train home.  Return trip is already planned.