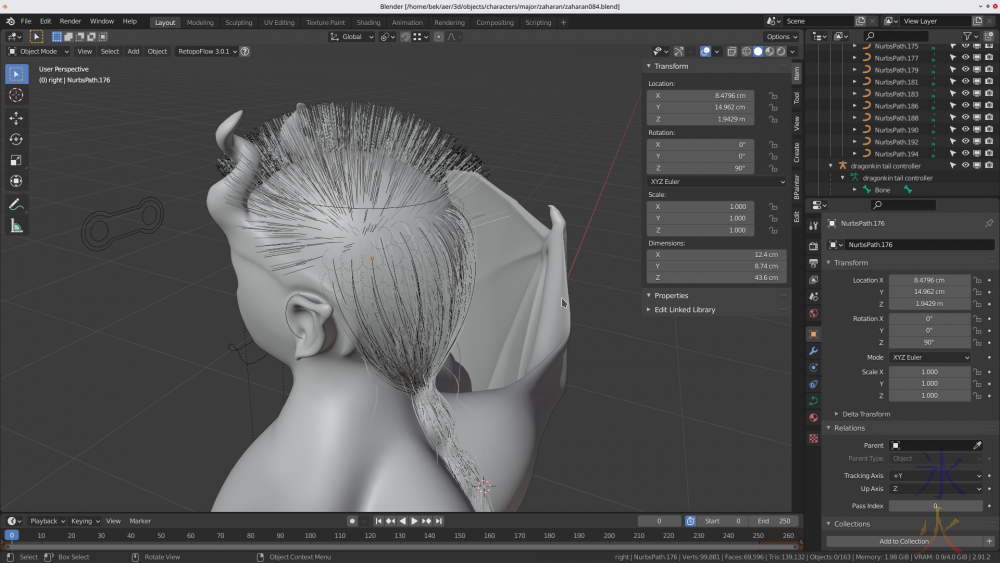 It's going slow partly because it's tedious (which means I will happily get distracted by anything and everything) and mostly because it's actually slow, there's a fair bit of lag when moving the curve guides around as it's probably calculating where the particles are going while I'm doing it.  I think I've only got 1-2 child hairs showing but I kind of need to see what shenanigans they're getting up to so currently just putting up with the fact that it's slow.  Hoping when I redo this in the not too distant future whenever Blender's new hair system drops that it will be a lot quicker and easier.

Meanwhile I'm actually on the top at least so hopefully it will be done this time next week!

Acaedia meanwhile is progressing nicely, with the addition of the summit room (a very big conference room that's used for Tribe Summits, of which there's a global one every year that rotates through the major Tribe citadels and possibly regional ones every 3-6 months maybe, and it probably gets used for other functions) which I haven't even blocked out furniture for yet and three vip suites (which are just linked dups of the Royals' apartment). 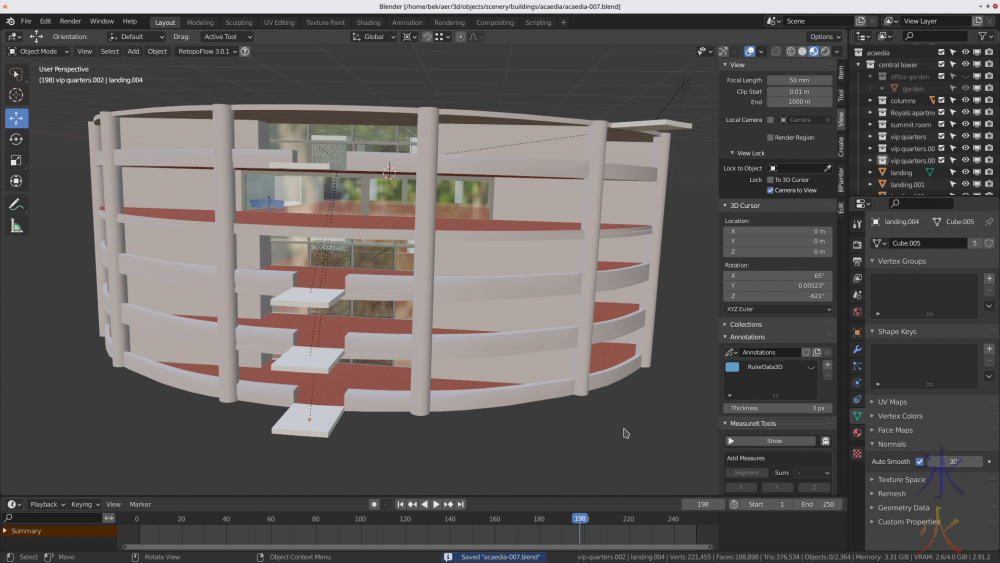 Yes that little blue blob in the summit room is Red.

I'm currently trying to nut out ramps.  I originally placed them at quarter marks from each other around the tower to get the ramp angle correct for accessibility (mobility aid) purposes but then I had other accessibility issues (could not get ramps where they were needed).  So I've made them steeper so the landings can be closer together and access where they need to access but figured it should be fine as they have a chair lift (there's a chair on a platform with a space next to it for prams or small vehicles, and mobility aids at one point I guess but in the current timeline only hardcore religious types who think that people shouldn't "play god" use them because in the time I'm currently working in medical technology fixes most things) between each platform. 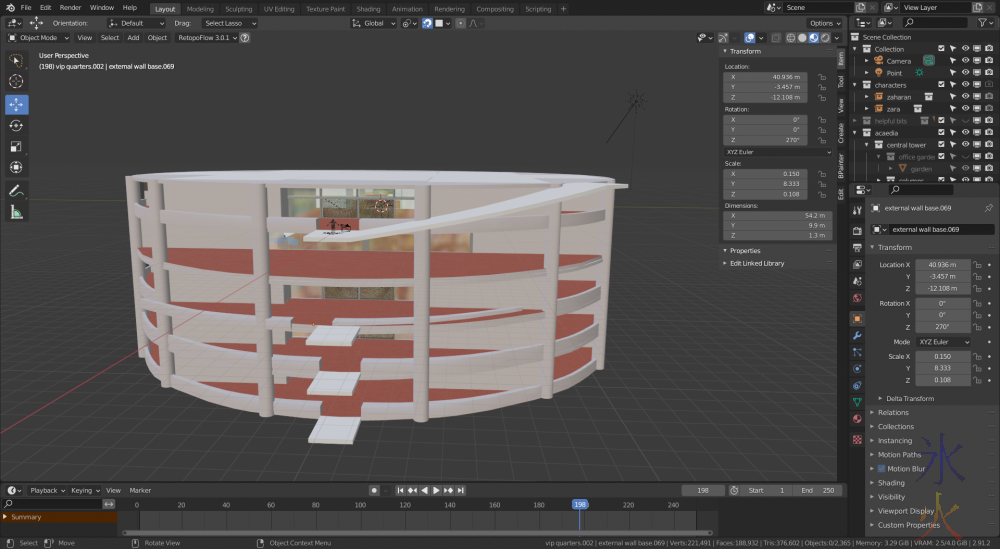 I haven't built the chairlifts or guard rails yet so this ramp looks totally unsafe.   And the reason I hadn't built the chairlifts yet was because I got confused and for some reason thought I needed a pod and so built one of those and then realised it was a) too big and b) entirely the wrong shape and probably should have exported the pod into its own object file rather than deleting it but that's what I did -_-

It's okay I can rebuild it again and it will probably be slightly better when I do.

The central tower doesn't have particularly large ramps up the top (where I'm building at the moment) as there shouldn't be too many people up here normally (largest groups would be Tribe Summit and school groups on excursions), the more trafficked areas will have much wider ramps which will be mainly pedestrian and slow vehicle, the chairlift and possibly an area/lane for faster vehicles (mostly variations on bikes and small powered personal vehicles, no pods or large powered things in the upper areas of the citadels because that causes problems).

Above the Royals' apartment there will be a buffer garden and the office where the Royals do most of their work and do small meetings/interviews.  Below the VIP suite will be another buffer garden, Royal Guard training rooms and  a terribly named pub and recreation area mostly frequented by Warriors and Royal Guard (anyone on duty isn't allowed to get drunk for obvious reasons XD).  Below the pub the tower gets bigger and I know there's a courthouse, school, library and a community garden/central gathering area but I'd have to duck back into the head universe for a closer look to figure out what's where and if there's anything I've missed.

And then there's the rest of it.