The big art block (as in block of hours assigned to art, not the art block where apparently one can't think of anything to draw, I always have things to draw though I also tend to overload "draw" to mean whatever I'm doing at the time which is almost always 3d) was also pretty tedious, I got more hair guides done.  The big art block happens during the day when I can fit it in and is dedicated to character work. Those loose spindly bits are coming and going which is giving me some hope that I can get rid of all of them by the time I've finished placing all the guides.

The small art block (see above) happen at night (but they have so far been about the same size as the big art blocks x_x) and is dedicated to set and prop work.  Currently I'm working on Acaedia.  One of the previous progblogs showed that I was nearly done with the shape of the floor I was working on (and by extension the shape of the entire central tower).  After I'd got all the rooms sorted out, in my infinite wisdom I am now going way overboard with linked duplicates, which in this particular case basically means I deleted all the room copies and will link dup instead of normal dup them like I did initially.  But while I've just got a quarter of the quarters to work with, I've been cleaning up various parts of various meshes such as joining the floor and ceiling of each room into one mesh and deleting the internal faces, joining the thick part of the wall and the base it was sitting on to make a nicer flowing surface (I hope they connect up nicely when there's more copies), and finding out through trial and error (mostly error) that I don't desperately need the subdivision surface modifier on the curved surfaces if I add more polygons, bevel the edges (which is actually an in-place extrude of the faces attached to the edges I want to bevel and then scaling and/or moving them slightly because I can't find Lightwave's equivalent of smooth shift in Blender, it's probably somewhere blatantly obvious) and use both smooth shade (which I tend to automatically apply to everything anyway, encountered awkward shading for the first time in all the time I've been using it with this model) and autosmooth.

And at any rate most of the walls are going to be covered in plants.

Also doing a little bit more texture work (hence the post title) which will get adjusted/added to as I keep gaining context (I'm the type that needs context). 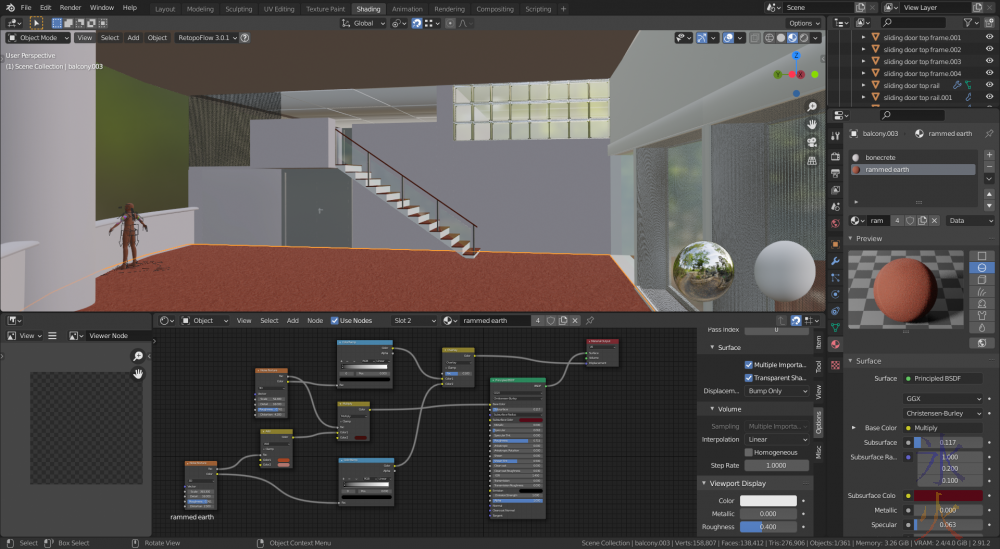 The outside of the building is something apparently called "bonecrete" which probably stemmed from discussions with 16yo about using synthesised bone as a building material when I was telling him about how all the buildings in AER-verse had plants growing out of them (as in straight out of them, soil optional) but I wasn't sure what they were made of and he saw trying to figure out possibilities for building materials that would allow for that as a fun exercise.

Don't ask I do a lot of work much later than I should be.  Also no I don't think too much about anything whatchu talken bout.

All the floors seem to be rammed earth (the texture of which I really need to do something about as everyone I've shown it to keeps calling it carpet) except for the bathroom, toilet and utility rooms which use polished concrete or something similar.  I have no idea what the walls are made of, I thought I was making the rammed earth texture for the walls but apparently not XD

I told you I don't have any control over this thing.

I actually can't wait to get to furnishing (I'm sure I'll regret it once I start XD) but I want to finish the entire building first because that's how I roll.