I managed to draw up a rough schedule to try and fit everything in, and am fully prepared to shuffle stuff around.  At the moment hive and Duolingo are my biggest time sinks, going well over the hour each I've allotted them; hive because it's hive and there's a bit going on plus I'm supposed to be moderating a couple of communities and I'm doing a terrible job even looking at them never mind anything else, Duolingo because I was finding it easy so I gave myself a challenge of getting to the next level each time instead of just doing one stack, and then got a thing where it wanted me to use the keyboard instead of the word bank, and I found out the hard way that I've been sight reading Chinese and Japanese and haven't actually associated many sounds with characters.

So I guess from tomorrow I have to try hardcore focusing for the hour and just stop on whatever language I get to with Duolingo and kind of just pick at what's left of my feeds.

Now onto the not much stuff that did get done. 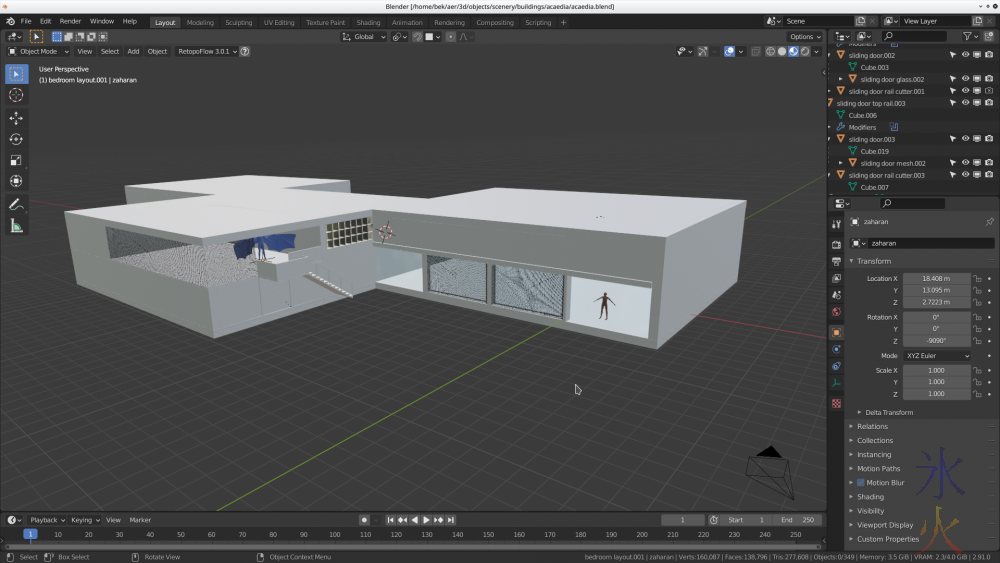 There are ceilings! The ceilings and floors have got electronics and insulation/soundproofing and stuff in them hence being ridiculously thick (50cm x_x).  The ceilings are comprised of light panels which usually default to white but can be made whatever colour whoever has access to change the main light wants. 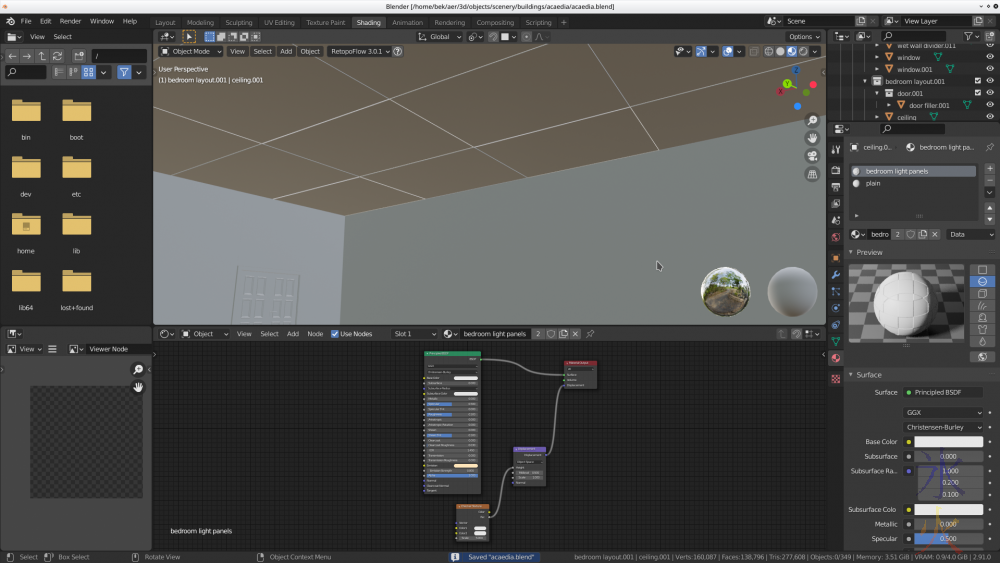 As I did it cheaply with the checkerboard texture and a possibly unnecessary displacement node I ended up having to do a variant for each room type so the pattern looked somewhat sensible.

The doors have been replaced with some really nice ones from the Archipack add-on. 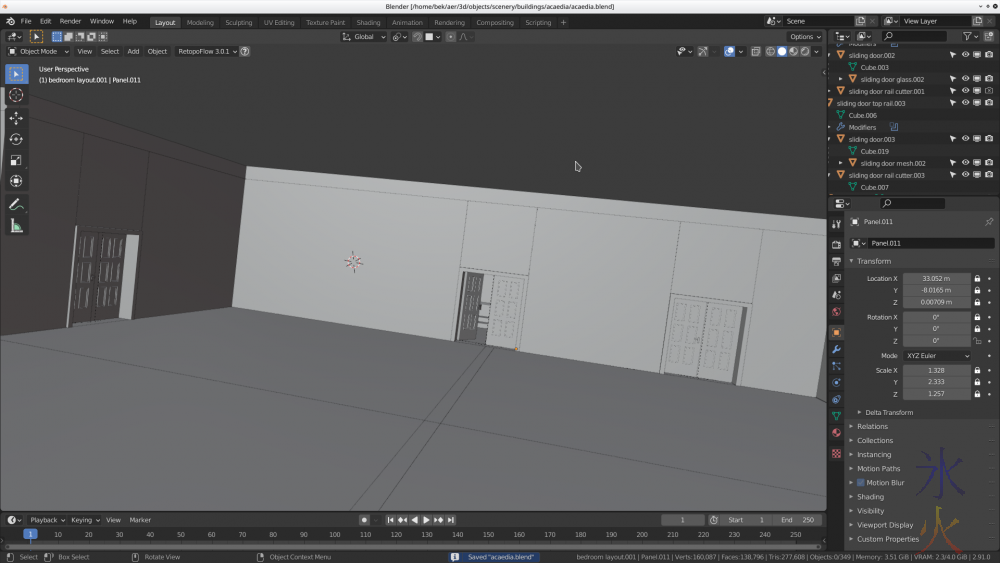 Turned out it wasn't too much more effort to resize them and wedge them in as they're very sensibly set up.  They also have some lovely sets of stairs.  I only needed this straight one and knocked off the rail on the wall side.  I'll probably keep the remaining rail as is as it's a nice looking one and I don't know what else to do with it at this stage.  The doors to the utility rooms are the same as the internal doors, I just edited them to remove the decorative bits and make them more...utilitarian.  A bevel modifier was added to the bathroom glass blocks 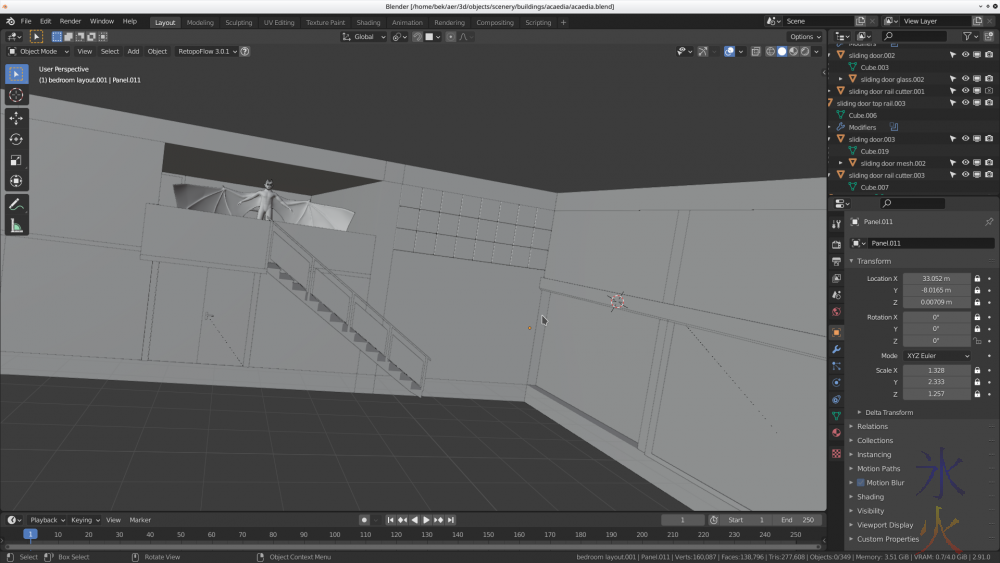 I think I have all the fixed structures that are likely to be in the bathrooms and utility rooms.  The kitchens will also have the same layouts. 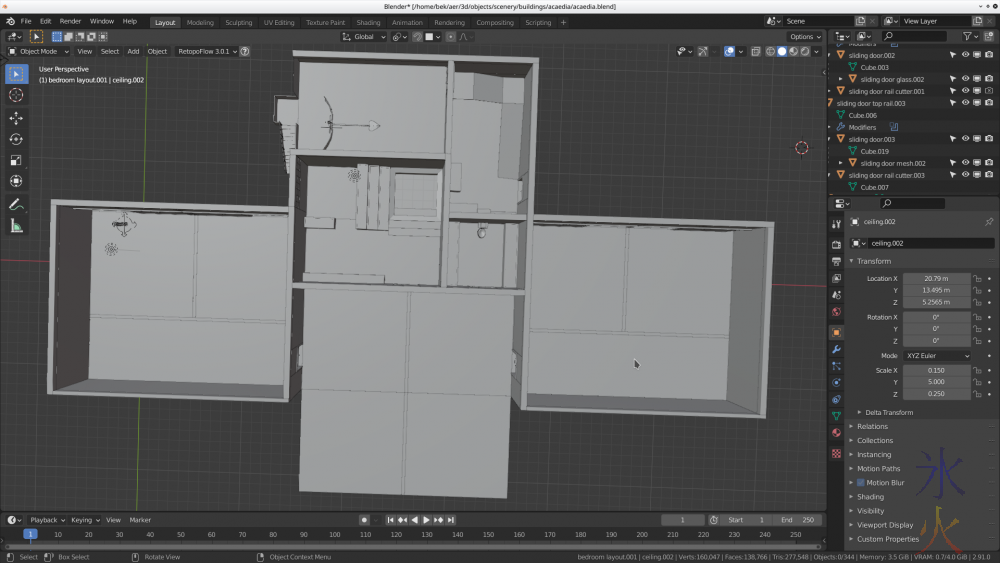 In-universe all the different types of apartments (there's a few) were designed with the same layouts to expedite building as Acaedia was constructed during a time period of serious turmoil, and came under heavy attack before it was fully complete.  I suppose it's quite possible in the times of peace that followed tenants could have completely gutted and remodelled their abodes as they saw fit but I'm not dealing with that unless I have to XD

The top utility room/drying area has the screen door mesh to allow air flow through.  It's bulletproof weatherproof mesh so no worries about accidentally poking a hole and falling through. 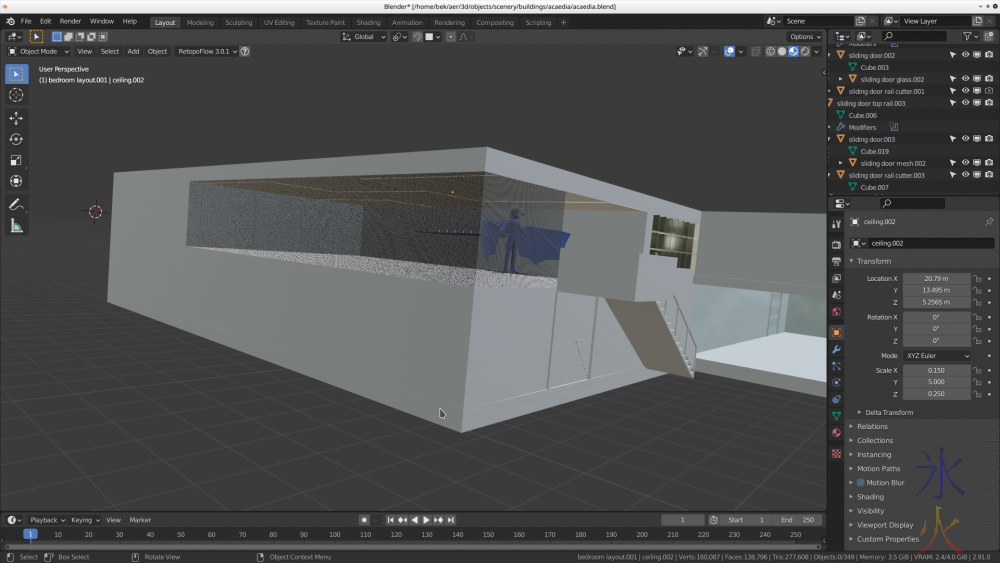 Now the only really major issue I'm having is that I'm not convinced I'm going to be able to cleanly fit the entire suite into a circle and that's going to trigger some serious ocd.