skip the nonsense and jump straight to the idea

At some point last year or so, I got gifted some dragon head NFTs from @kristyglas.  When I saw them I thought something that vaguely translates to: "I know a few people that make adoptables, maybe this could be a thing for them," and didn't get any further than that (mostly because it sounds like a decent sized project and I don't want any more decent sized projects).

More recently, I had a conversation with someone on deviantART (I think it was Fellfallow who was one of the people I was thinking of but I can't find the "deviation" we had that conversation on and dA doesn't seem to have useful activity pages), where I mentioned that their adoptables would probably suit NFTs really well.  They inquired about what NFTs were and I tried to explain it (probably didn't do the best job) and linked them to NFTshowroom and also mentioned a couple of other NFT sites I've seen the people on hive say that they also use.

I haven't followed up with them since and I backburned the idea again (albeit in a very slightly more developed form).

Even more recently, @aggroed wrote a post spitballing ideas about making paper doll NFTs for his girls and the idea moved up enough to get a writeup (to some value of writeup).

At the time where I started writing up, I found one other thing that seems to have adoptable NFTs, there could be more and I could just be failing at search, everything else I found was to do with NFT adoption aka uptake.

What are adoptables and breedables?

Remember cryptokitties? Vaguely similar to that, but not limited to cats.

Adoptables are characters/character designs that are made with the express purpose of selling to whoever wants to buy them.  It seems that while the original artist usually continues to be credited for the design, the new owner can generally do whatever they like with the character as if they themselves created it.  They seem to come in the form of designs which are usually shown on a sheet that you can pick from:

Or as model sheets with varying levels of detail:

Some artists specify conditions (ones that I've seen include no commercial use, no onselling and the buyer has to at least occasionally produce artwork/stories with the character) but most don't seem to.

They're hugely popular on deviantART where they have their own category: 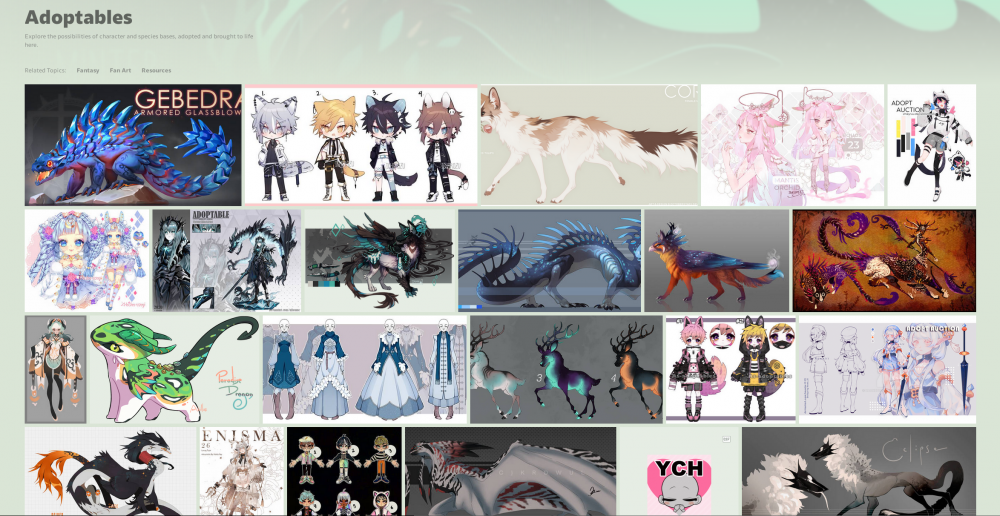 I assume they're also popular on FurAffinity as I usually see links to equivalent auctions on some "deviations", and haven't looked into other art sites.

When I tried looking up stuff on breedables most of what I found was that it seems to be a pretty big deal in SecondLife.  The first time I had encountered the term, and applying it to this particular case, breedables are a type of adoptable that can either be "bred" from (with another one of your own or an amenable third party's adoptable) or that is the offspring of two other characters (that may or may not be adoptables/breedables themselves).  As one might expect with offspring, they should combine traits from all lineages.  Sometimes bases are provided for people to do their offspring designs on.

The artist draws a base sprite (optionally with variant poses and expressions). 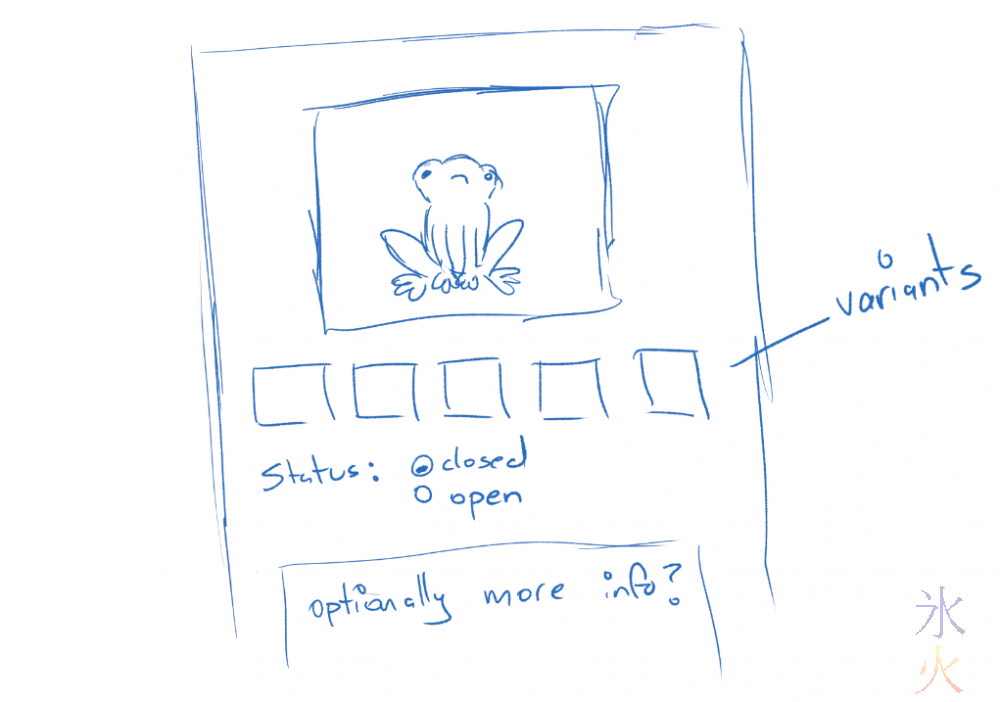 They can decide whether or not to open their sprite up (make it available for other people to use), default is closed.  It should be changeable on a whim and come with the definition and a warning that if you've opened it and then changed your mind and closed it, it will only prevent other people from generating new adoptables/breedables with that sprite and won't revoke any already done.

If the artist wants their adoptable to be system breedable, they will need to provide size (height, length, weight, build) ranges, available genders, and indicate which gender does the birthing/spawning/willing into existence/whatever, and the maximum number of offspring that can be produced in one birth/batch/clutch/etc.  Ideally this should editable/changeable on a whim, but it depends on whether the system can cope with this, and as above if things do change, it shouldn't affect already-generated adoptables.

The above settings should only be editable by the creator, not by anyone using an open sprite.

Tags can be used for filtering purposes, perhaps with an autocomplete for existing ones.

Optional information could include whatever background story or history or additional stuff the artist want people to know.

Having a closed sprite should only affect creation rights, as in only the creator of that sprite will be able to generate new adoptables/breedables of that type.  Everyone else can only obtain one by buying or being gifted.

The artist goes into the section where their sprite designs are stored and picks one.  Alternately the artist browses the gallery of open sprites (probably with filters) and picks one.

This should then take them to a screen similar to the first one where they can choose a pose and expression if those options are available and then start work.

After confirming that they've completed their colouring job, they are then taken to a screen where they can optionally fill in some vitals (some people like to do it and others let the buyer decide, and maybe there could also be the option to randomly generate something within the parameters set by the sprite if any were set).  They can then choose to make their adoptable a breedable.

Setting breedable to "no" will make it a normal adoptable.  If it's technically possible, the creator may be able to change their minds prior to transferring it, but the option should be permanently locked once it's transferred.

Alternate idea which may be more confusing: have both system breedable and manual breedable options so that people who prefer drawing their own designs know what's available.

Extension idea which may be technologically difficult to manage: allow for the option of multiple parents (some usually alien species can get interesting like that apparently).

For the types that don't birth, the creator/owner can set a stud fee.

Once everything has been set and finalised, the adoptable/breedable is born/minted (for some kind of fee in case that needed to be specified) and comes with a birth certificate of authenticity.

I've extrapolated common options from my experiences with and observations of people who have families (sometimes spanning generations) of fan characters (which seem to be another type of breedable whether the creators intended that or not) and added token fees:

Ideally there should also be a custom option so both parties can set and agree to their own arbitrary terms.

After everything has been settled and paid, the system picks a random number between one and the max offspring number and generates that many offspring combining traits from both parents (and possibly traits from back along both lineages) along with birth certificates and pedigrees (keep the possibility of this eventually needing multiple pages in mind).

I don't know how difficult this part would be, but if someone can make something like this Pokemon Fusion Generator then I figure it's at least doable.

Does it need its own token?

Hopefully what's outlined is enough to interest people who are into adoptables and breedables.  To attract new people and/or appeal to existing people who want more, some other ideas I had to further complicate things are:

If you or someone you know wants to run with this go nuts (no permission required, I didn't even put a CC-BY on this one).  If you feel like telling me that you're going to do something with it I would love to know about it so I can watch it come together :)

Fun fact 1: I spent most of Sunday writing this instead of doing the other stuff I had planned on doing

Fun fact 2: the frog in the leading image is nicknamed "Blarp" and was originally designed for @aussieninja for an idea that didn't eventuate back in 2018, and while it was kind of suitable for describing my ridiculous idea developments it was mostly because I have an aversion to opening with other people's images

Fun fact 3: this was drafted on my blog because that's where I like to work, but it's one of the extremely rare occasions where I posted to hive first because it was more relevant there.

spacefish Tuesday, 27 April 2021 @ 5:05pm [Permalink]
Heyyy! I think you've posted the only thing I could find on adoptables in the NFT space. Ever since I heard about the space I thought the two would go great together! I know nothing about code but would looove to collab sometime. Let's work together on something!! Also...I think we might be in the same place in Australia based on your recent post about a lockdown...!
bek Sunday, 2 May 2021 @ 11:06pm [Permalink]

Am I still the only one, damn XD I couldn't find anything either which is why I wrote this and I don't even do adoptables x_x lol.  I have offered the idea to someone I know who is creating a nft/social/platform/thing called nyxlabs and they're doing something with it, not quite sure what yet as the thing itself is still under heavy development .  Also joined a discord as invited by someone on hive and joined it but got too intimidated to try talking to anyone and am still lurking to this day (I'm terrible x_x).

Entirely possible, I haven't checked how the rest of the country is going recently.  Hello if we are and if we're not hello anyway :D Thanks for stopping by!