The plane managed to land (rather heavily by the sound of things) despite the dubious weather on Christmas Island, and we made it back in the appropriate number of pieces just in time for what sounds like a proper lockdown, it seems.

Seriously though why do people insist on hoarding toilet paper.

Well, one week extra planning I guess, and I have to reschedule two appointments.  The extra planning time will be helpful as I will probably need to actually have a work schedule again so I can learn the nonsense I need to figure out this hive front end silliness.

After unpacking and stuff I decided I was going to cruise over the weekend and tomorrow as J has the Monday off, and do art and mindless things.  Mindless things included finally sorting through the digital photo collection (digikam made a bit of a mess so I have a lot of doubles, already cleaned up the library on the laptop as that's what's managing everything but as it's separate from the library on my server I had to do that too), figuring out where to hang pictures, actually hanging pictures and continuing to clean and sort through all the toys and kids' books.

I spent pretty much the entirety of yesterday and today just sorting through the photos.

I don't even want to think about sorting and scanning the analogue photos.  That's a mission for another day that probably isn't anytime soon.

Working with textures (or with anything at all really) is strangely a hell of a lot easier on the big rig than the small rig.  Got the transparency to display without crashing. 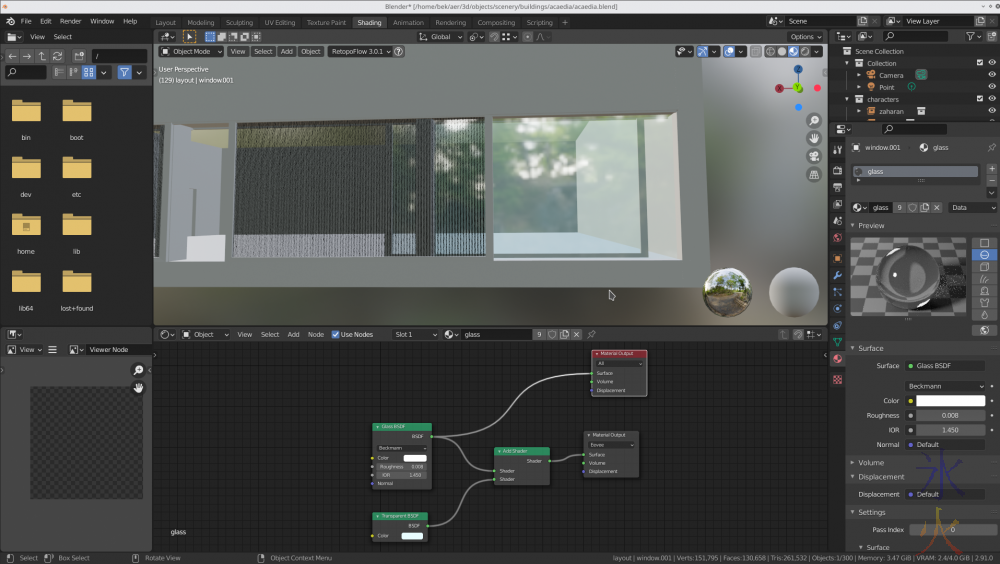 I need the transparency shader just for Eevee, the glass shader renders fine by itself in Cycles. 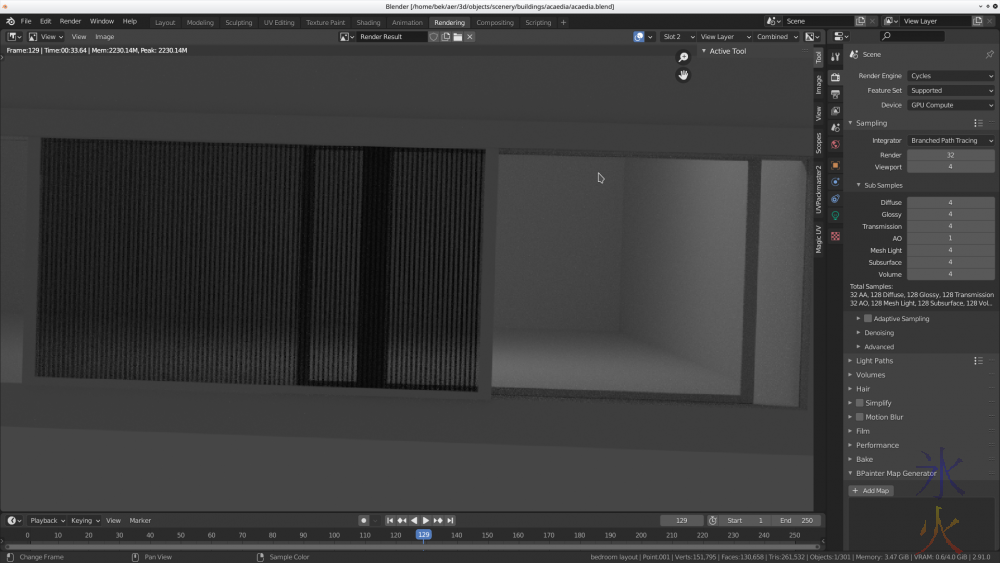 I'll probably have to tweak it to make it look more glassy when there's colours and furniture and some proper lighting so I can see what I'm doing, at the moment I can see through it and that's...pretty much it.

And I then used the glass texture to make some frosted glass blocks to let some light (to some value of light) into the bathroom (mostly for looks because the window will be under cover anyway). 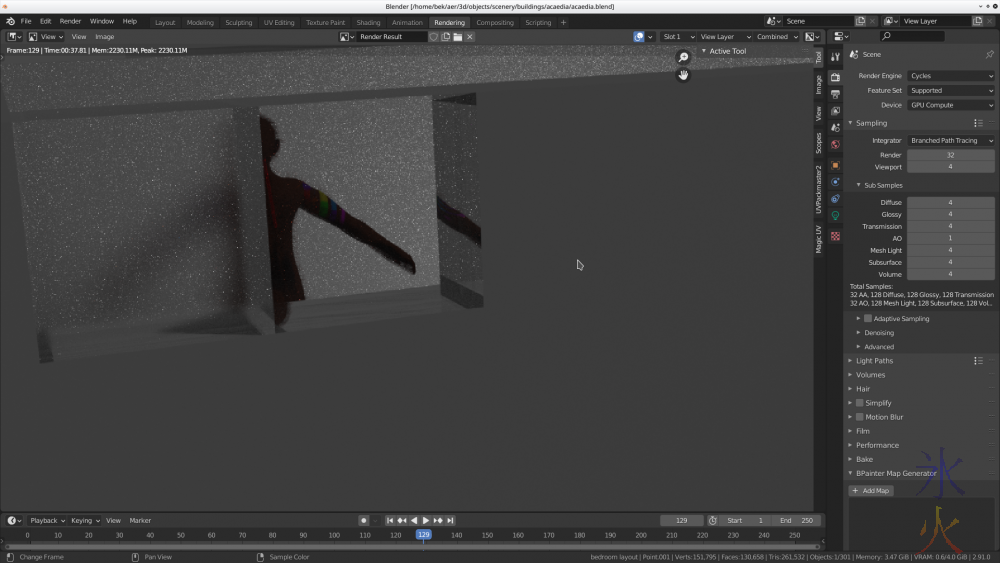 Please excuse the fireflies, the quickie renders are messy because I only need to make sure things are going to turn out somewhat like I want.  The "frosted" block just has a lot of roughness, nothing special.  I should probably have just made the entire window one object but they're individual blocks just in case I need different sized glass blocks for different sized windows and so it doesn't look like I'm just resizing one object for everything x_x 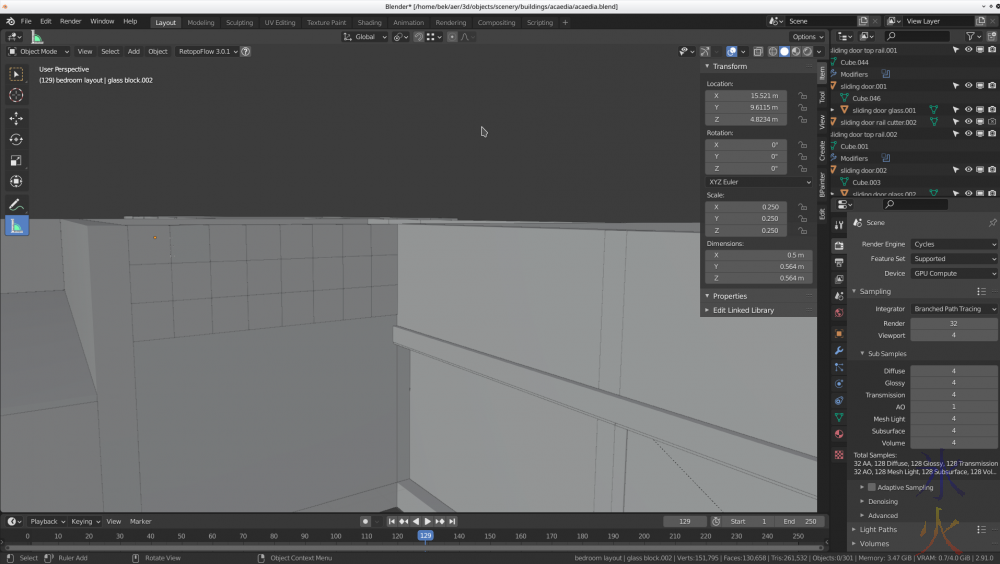 I never claimed to be smart.

Other than that I've just made a utility/storage room which contains a laundry area (including sink), access to the hot water thingi and plumbing and also a battery wall.  The rest of the area could probably have shelves or somesuch in it and I'm currently working on a ramp that will come down the walls opposite and adjacent the upper door to go up to the drying area. 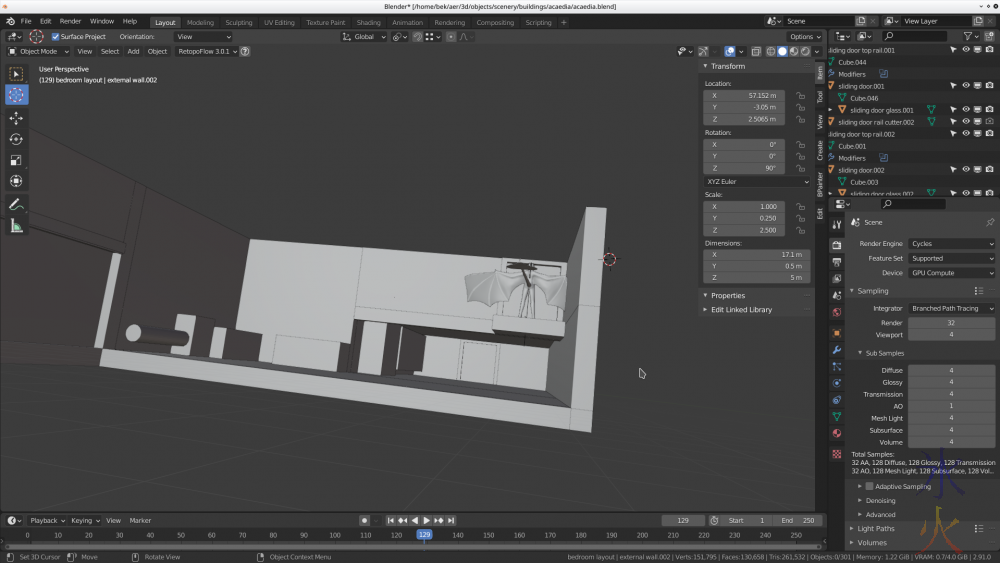 I was just going to put some lines up in the utility room but then figured it might get pretty musty in there even with adequate ventilation so made a small top deck (which really isn't that small but the Flyers need exhorbitant amounts of space. 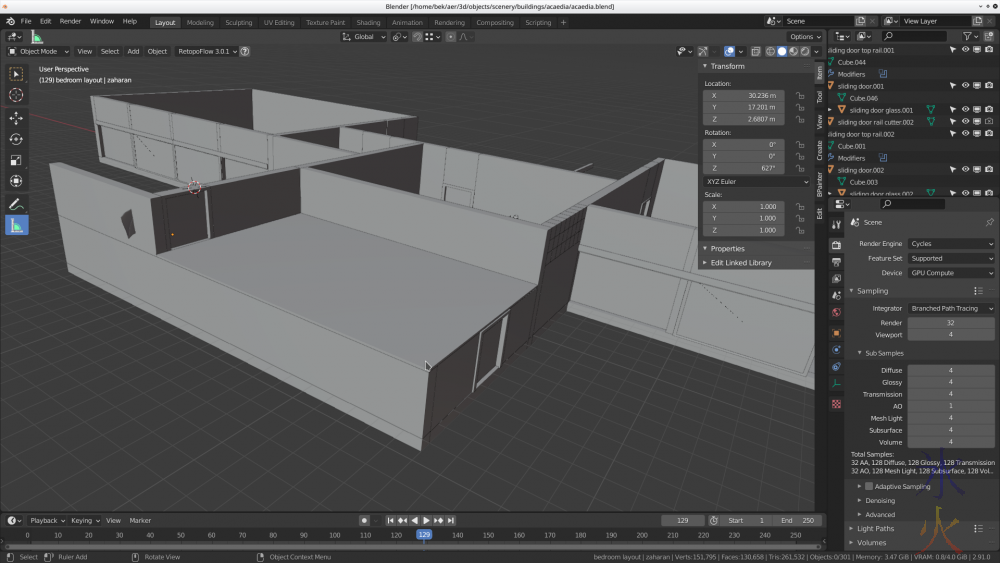 I may have to resort to stairs on the open side as I'm not going to be able to fit a safe ramp anywhere (at least it's still accessible).  As well as clothes drying there will probably also be a small garden up there too.

I think I just have to nut out that area (and adding a vanity area to the bathroom as I just realised I still haven't done that yet) before deciding how big the minor and major living areas are going to be and then mirroring the lot.

Then will just have to do kitchen layout and it will be ready to clone.

Amusing fact: I told Sprat that I hadn't put a ceiling on because I'm worried about creepers spawning in XD (we all know I haven't put the ceiling on yet because I'm not done)