Stuff is a mess right now.  Don't really want to talk about it as it involves other people (spoiler alert: nobody is dead yet and J and I are still together seeing as those are the things people seem to be jumping to).  End result of that is my head went into interesting places that are hard to come back from and while I really tried hard to do some art to stabilise, well basically it didn't work out, so buggerall got done.

Literally buggerall of anything got done.  No art (hence the name of this post), no moderation work for OCA, barely any housework, definitely not the photobooks which I wanted to start on last month because I'm not sure about postage times due to some pointless virus, not much of anything.

I did try.  I tried to finish colouring a sketchy, but after staring at it I realised I had no idea how I'd started to be able to continue, so I made a copy of the flat layer, naffed around with my colouring brushes, and then gave up.

I started Red's hair styling again trying to go straight up the middle before going outward, because the last attempt (I started from the bottom and was working upwards before so it would layer correctly) resulted in a mess similar to this but worse 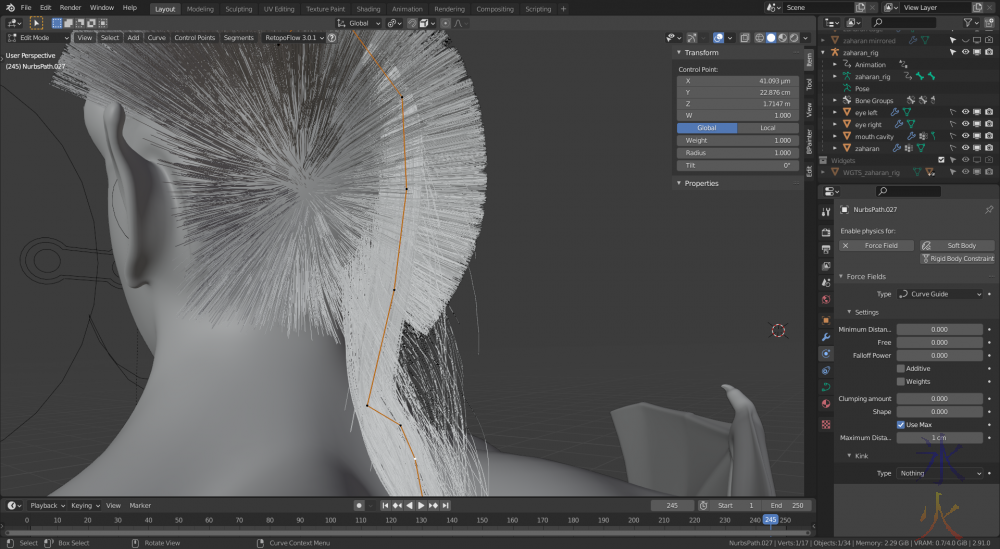 and I don't know why.  Hoping the next lines up the sides will start neatening things out as I'm putting them a bit closer together, or that maybe they'll just drop and at least be less visible if I turn hair dynamics on or something but I think I'm being a little bit too optimistic there.

Other than that I've been helping out at gym with the literal rush of stuff that's been going on as I guess they're trying to up fundraising stuff as we probably haven't made as much money as we would normally have made as we haven't had the badge tests and comps on this year (when the canteen and raffles would be making the most money) and continuing to pick at the neverending work that is cleaning up my scripts, and kind of trying to figure out the second block which means having to work out dates and times for the events that are in the really long outline (which I will also have to export at some stage so I can import it to my laptop, I should probably just pop the whole thing online but for some reason I don't want to do that even though even locally I have to log in to be able to see anything, which reminds me I need to put a webserver on the laptop so that I can).

So that's been me for the past couple of weeks, actually serious business bad and not my usual lame ass lack of organisation.  I'll try to catch up on everything but it's going to be up and down and all over the joint for the foreseeable future.