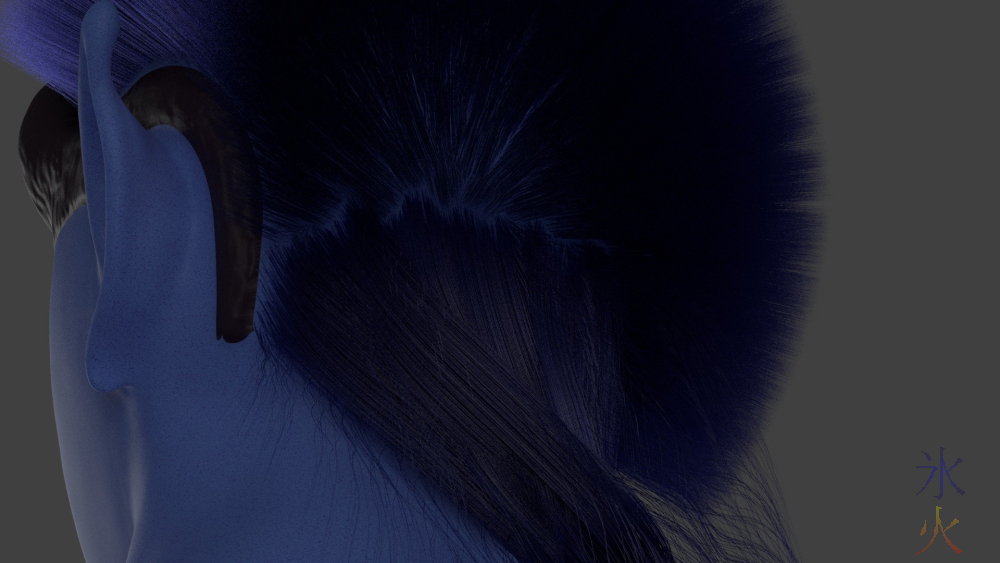 This is the test render in question.  It's on "crappy" aka the built in preview settings and using rounded ribbons.  Took 4:23.09 on hybrid, 4:44.88 on gpu only and 5:09.78 on cpu only.  I'll see how I go but sadly I think I will have to stick to gpu only as rendering on cpu occasionally makes the entire computer crash.

3d curves are supposed to look better close up, and they do seem to. 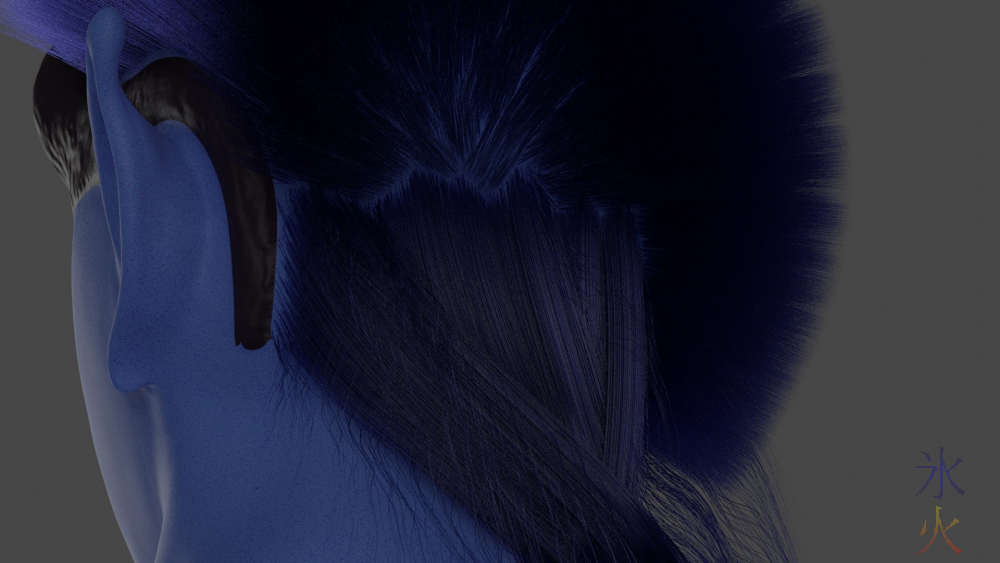 There's slightly less of a difference from far so I might be able to get away with using the faster one on normal shots.  I ended up having to use more guides than I want to but it doesn't look as nice with bigger guides. 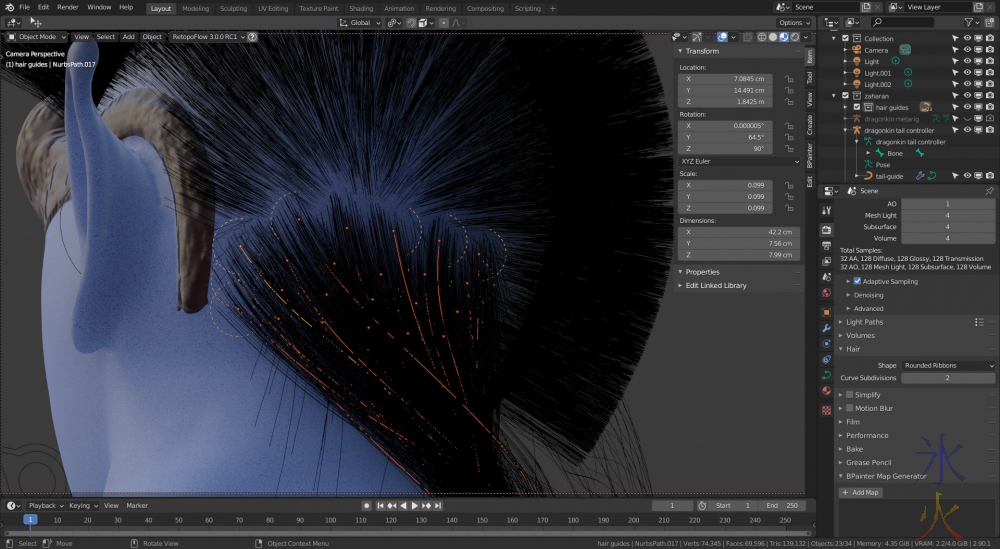 Currently I'm doing the centreline and the left side of the head.  The left side will then be mirrored to the right side and I'll make whatever adjustments I need to make.  Not really getting the idea of how many there are or will be? Let me hide the character. 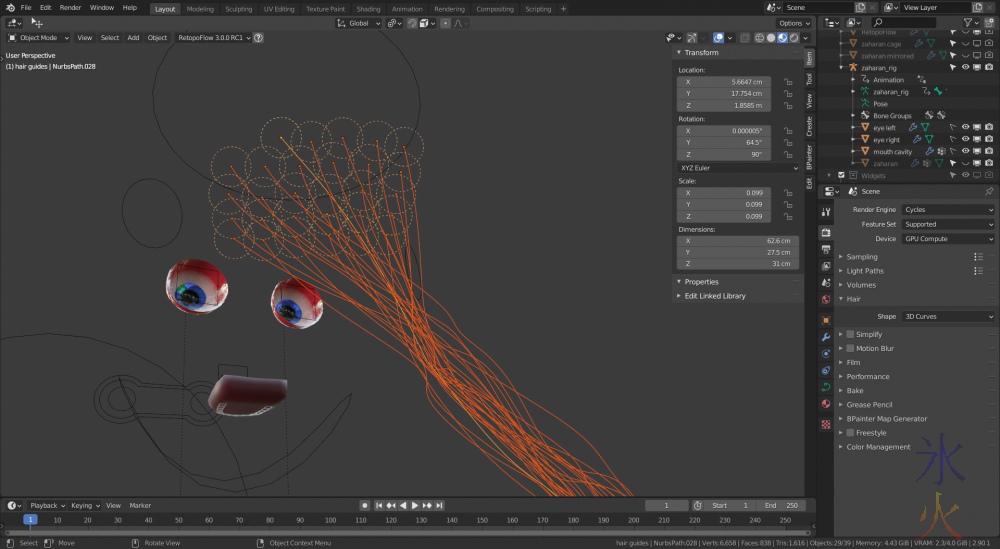 As you can see I'm barely a quarter of the way up the head so there's quite a few to go.  Fortunately adjustments aren't taking too long.

Oh I also finally got my new toy. 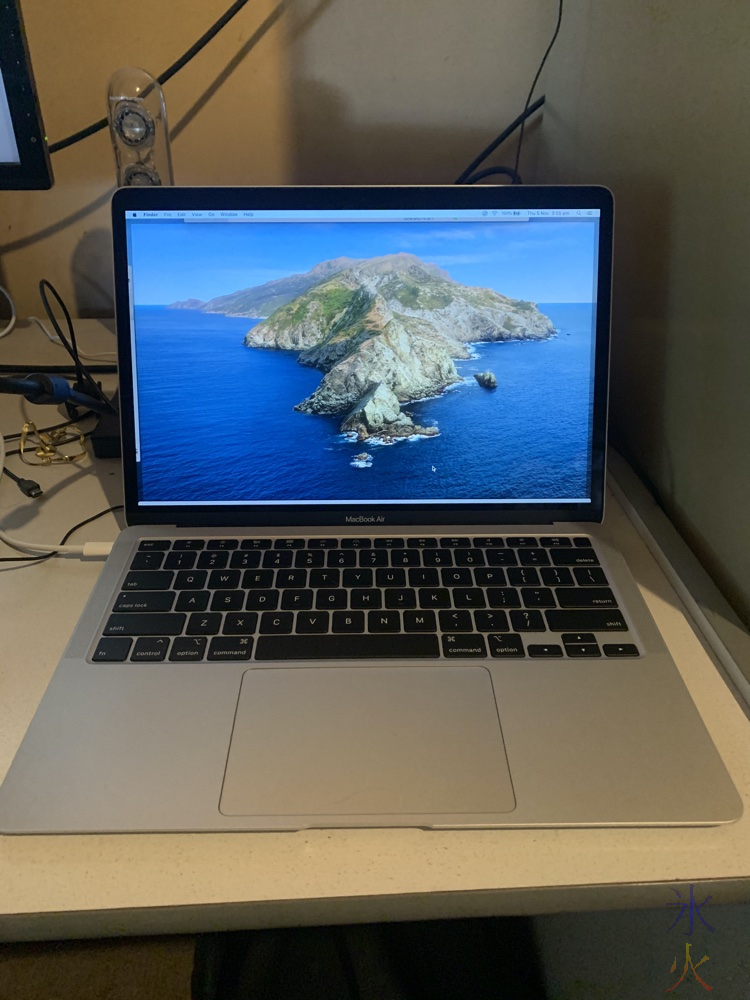 Now I'll be able to not go mad work while I'm back home.

I was quite impressed it got here on time as I'd received an email saying the delivery date was going to be later than estimated because covid sorry for the inconvenience.

I'll also have to fix the styling of my blog as when I made it I apparently didn't know how to dynamically size the box vertically so while it fit nicely on the big rig, it's kind of way too big for the laptop.

Outside of being able to work away from the big rig I'm kind of hoping to use this thing as primarily a photo manager (one would hope the bloody Apple products will know how to play nicely together, it's been so far so good as I actually airdropped the photo from my phone to the laptop and then jumped onto the laptop to finish this post because that was easier than waiting a hundred million years for Nextcloud to finish syncing before I can get to work reconstructing and reorganising the photo library).

I'm doing a rather complicated redundancy thing, so seeing as the laptop is now going to be primarily responsible for photos, I'm going to have the double copies on here (one in the photo library and one in the nextcloud sync folder, kept in sync daily with FreeFileSync) and just use the sync folder on the big rig (deleting the photos off that one and using the cloud folder as that will save 250 odd Gb on the big rig).  Similarly I'm going to double up the AER project on the big rig (as that's where I'm mainly working on it as the tiny little laptop will only be able to tolerate so much) and just use the cloud folder on the laptop.

I should probably also remember to swap out my offsite backup this coming week but at least it's now no longer months out of date like it was when covid happened.

Can you tell I've had many painful experiences losing a lot of work over the years to come up with this nonsense? XD