Missed a week again, oops :S I was supposed to post on the weekend I posted the last songpic but stuff happened, just not that.

Over the last week I finally managed to finish the retopo and apparently it has 8k odd faces with the mirror modifier, more once the subd modifier gets turned on, and probably more again when I get around to applying the mirror modifier which will probably be pretty soon (after I version save XD).  I then chucked a rig in it and tried it out. 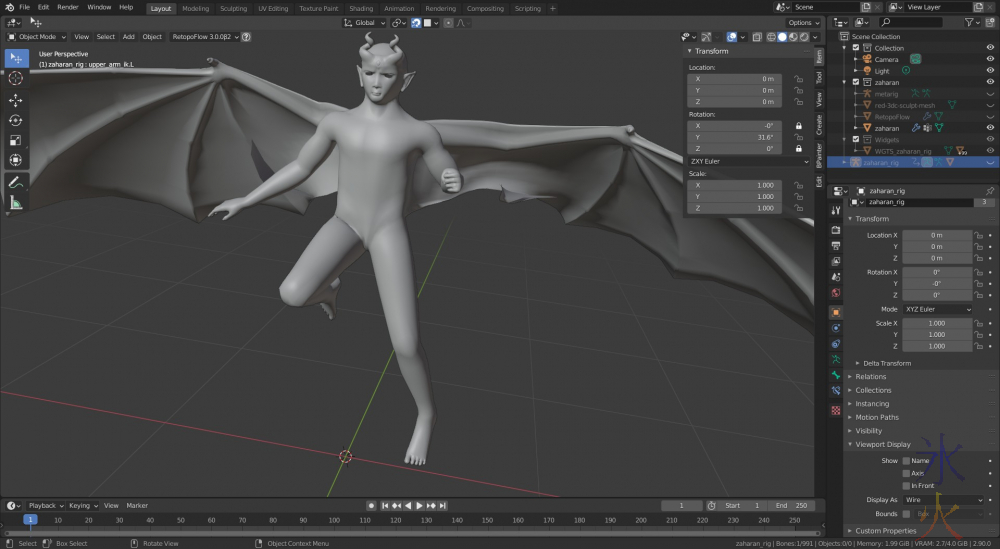 There were a couple of new controllers I hadn't noticed in the previous version, but like with the "new" Krita brushes I've found they might have been there forever and I'm only just catching up now.  This anime pose wasn't intentional, just vaguely happened as I moved stuff around to see how it would deform.  As usual there are some weight mapping issues that need to be fixed but it's not too bad out of the box.

Next job was stuff around with the tail rig and the next most useful thing ever was the addition of "on surface" to the distance limits in the bone constraints settings, as now all my tail controller bones will stay as far apart as I want them (previously I think there was only inside and outside which meant either watching what I was doing carefully or using two constraints and for whatever reason I usually managed to blow things up if I did that).  Prehensile tails are still a major pain in the system to manipulate but at least I can do it with a bit less headache now. 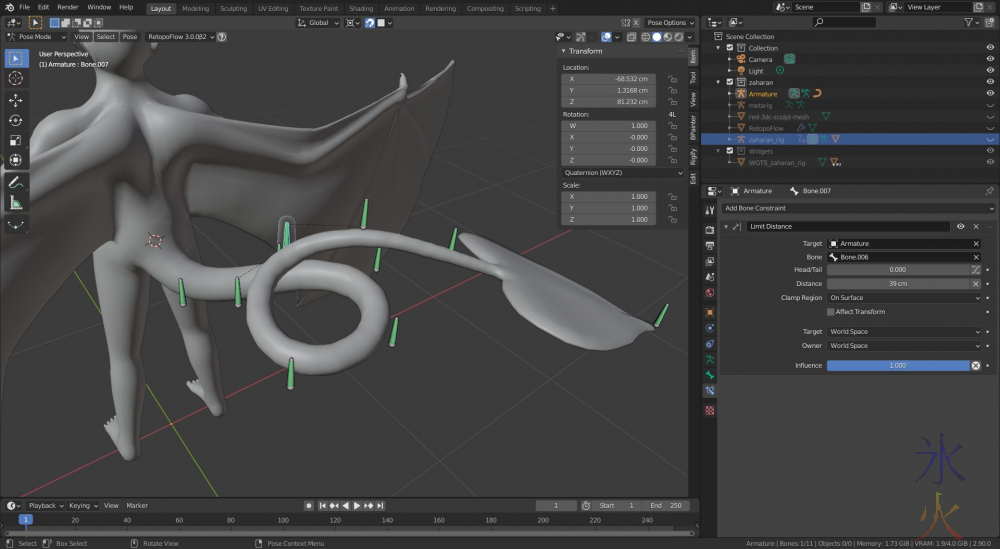 I should probably have tried out a couple more extreme poses but I don't really have too many super bendy Fliers and as far as I know, the bendy Fliers can do the splits and not a whole lot else as the wings make it super tricky (possibly impossible? XD) to do back walkovers and tumbles on the ground anyway. 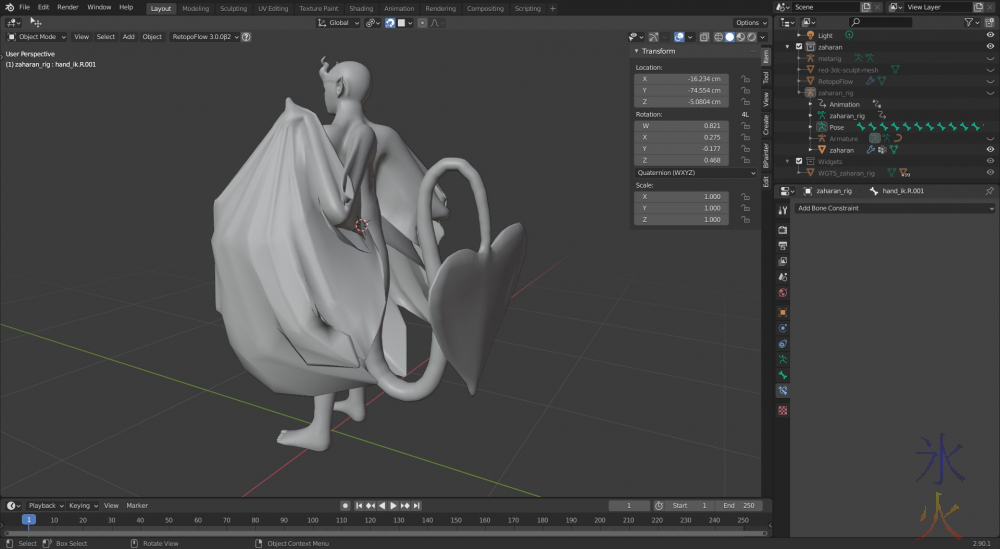 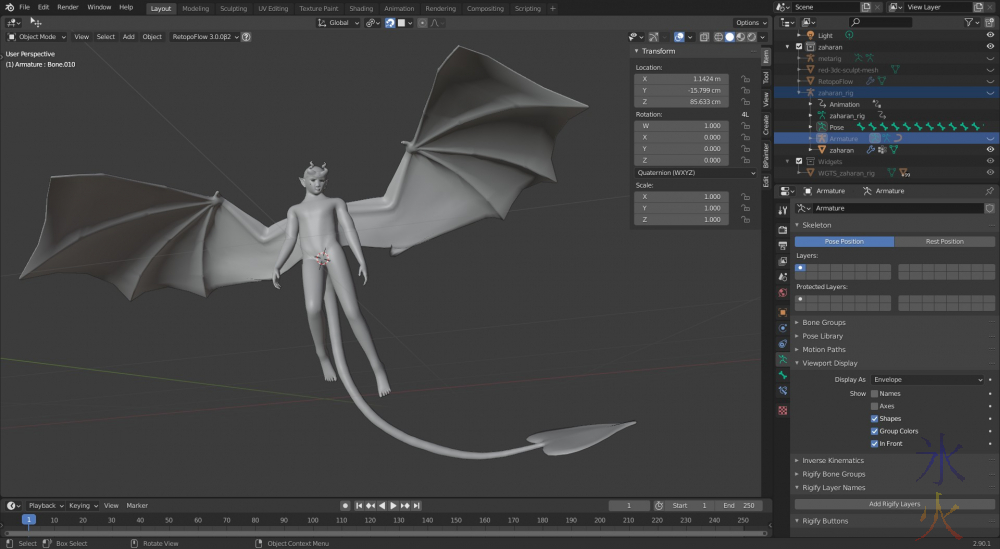 I need to regenerate all my rigs and organise the Flyer ones nicely too.  I was deleting and regenerating a lot in my tests, and kept overwriting instead of making new ones so ended up with a bit of a mess whre rigify didn't seem sure what should go on what layer.  When I do the rigs properly I'll make some of the controllers bigger so they're outside of the mesh and I don't have to make it "in front" which is an eyesore. 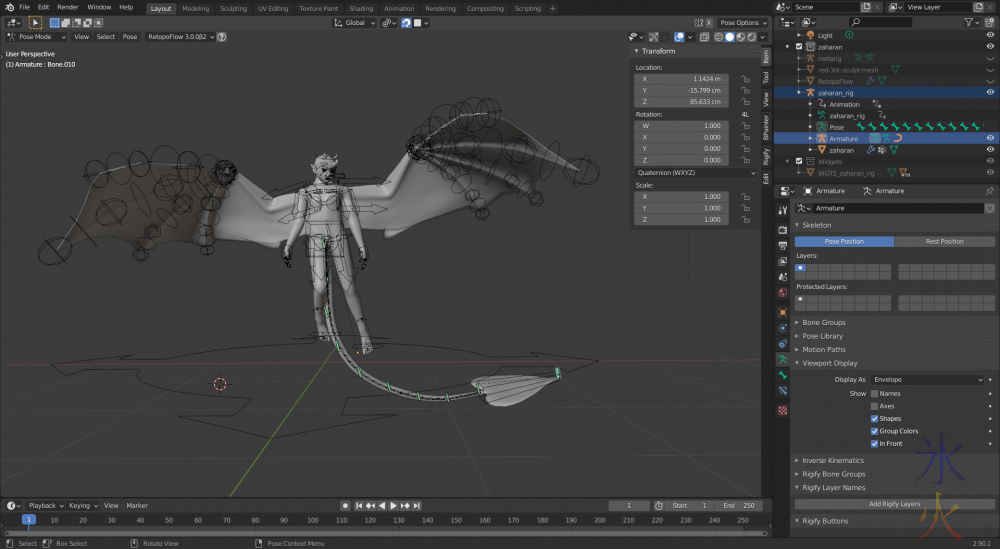 So now I need to bake that normal map so I can fix his proportions.

Which requires a uv map.

Which requires cutting up.

One of my favourite things -_-

I don't know if it required applying the mirror modifier but I did so I could see things that were going to stretch across the centreline easier. 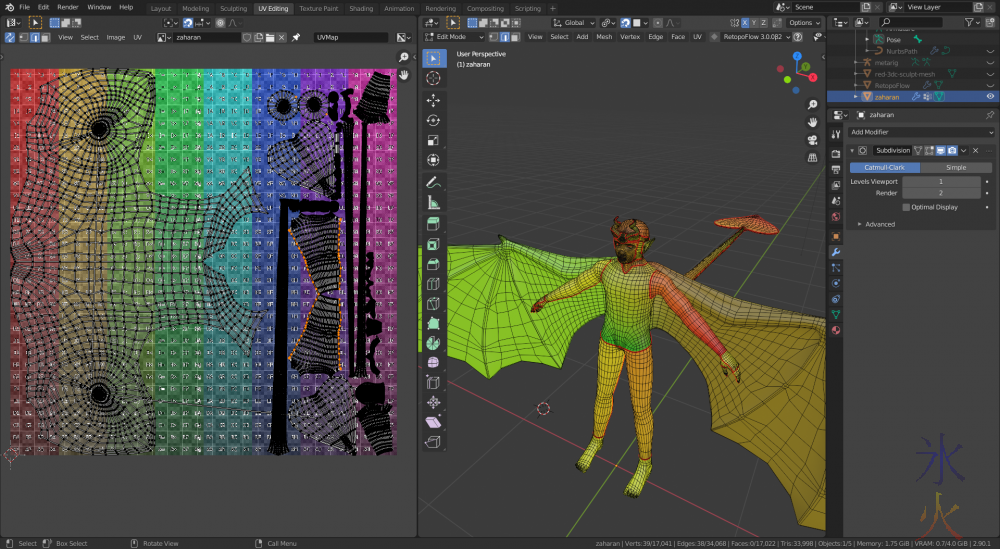 Live unwrap is somewhat useful.  It took me a bit of obscure internet searches (at this stage I don't even remember what I was looking for) to find out I had to press a button labelled UV sync in the top left corner of the uv image view to make it stay visible (otherwise it's only visible when everything is selected which is annoying).

Another tool I didn't existed is shift+ctrl+M which mirrors the selection.  Clicking the "extend" checkbox hangs on to the initial selection as well as mirroring the selection, and knowing about that (assuming it's been there in all the versions of Blender I've been using and not just the last two) would have made things that tiny bit easier previously.

So with both sides selected then it's U (to unwrap, and make sure it's on the side the model is on as it doesn't do anything on the image side) and select Mark Seam.

And I still suck at it.

Also for all the whining I was doing about having to bake in Blender, it's actually really easy.  There's a bake dropdown thingi in the Cycles render engine, some settings and a big bake button.