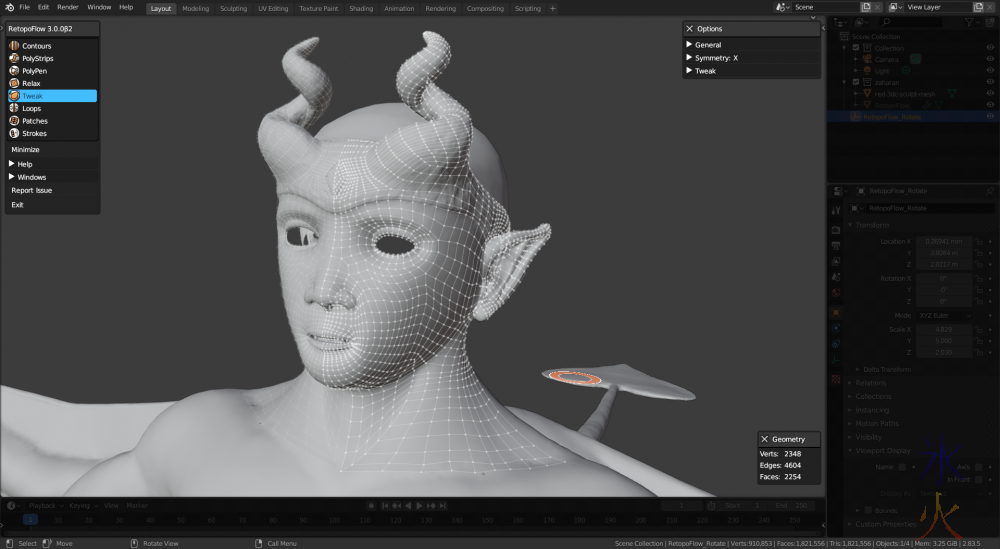 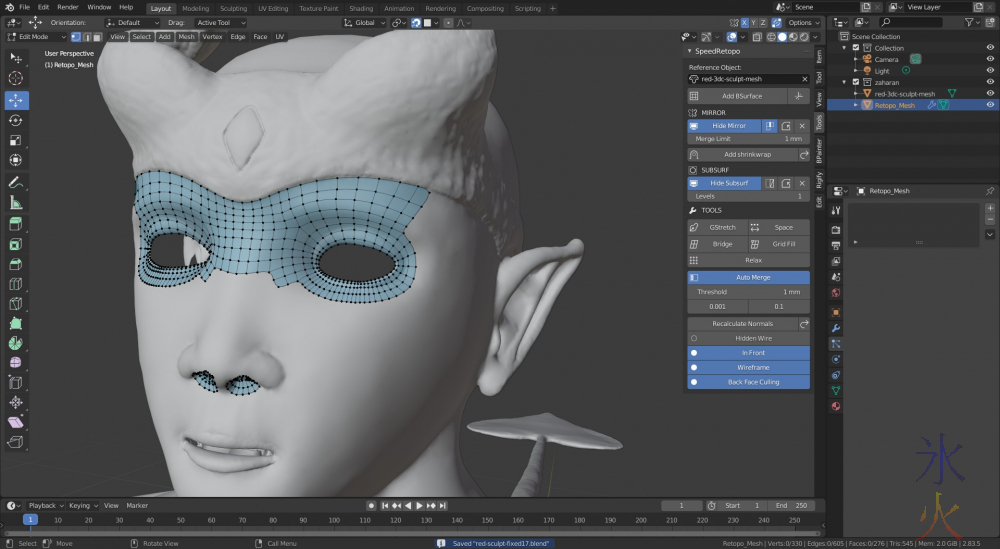 I initially had some confusion about how to use bsurfaces with it but got there eventually (something about being in edit mode on existing meshes otherwise it helpfully starts a new one).  I loved the space and bridge tools (wasn't smart enough to figure out the gridfill and gstretch tools, think I did work out when to use relax eventually).

Then I think I made it bug out when I kept restarting as I was getting used to the tools, as it got to a point where the mesh kept trying to be inside out (recalculate outside kept making everything face inside) and I'm not sure if I was using bsurfaces correctly as while it was correctly responding to me crosshatching, it also seemed to be unsure which way it should face anything and some of the faces would point the right way and some wouldn't and recalculating always made them all point the wrong way.  I wasn't sure if I should just continue and calculate them all inside instead so that they would face the right way, or if that would cause problems for me later (I don't know as I don't think I've had this particular issue before).   I drew around on the mesh trying to work out if it was a direction issue or a hatching issue and could only get it to point out the right way sometimes and repeating the strokes then made it turn inside out again.

There was also a persistent problem with the shrinkwrap modifier constantly resetting itself to offset the retopo mesh way higher off the sculpt mesh than I wanted.  It was easy enough to fix, but having to do it constantly started getting grating after a day of playing around with it.

If you can overlook the relatively minor bugs (I'm only calling the inside out mesh minor because I don't know if it will cause major problems down the line or not, and it's possible/probable that something I did made it bug out), it's a great little tool for all of US$1.

Me being the impatient git that I am, I then ended up splurging a lot of money on retopoflow (which I was shying from because of the price) and after the usual few hours of playing around and constantly restarting, I finally managed to get something going. 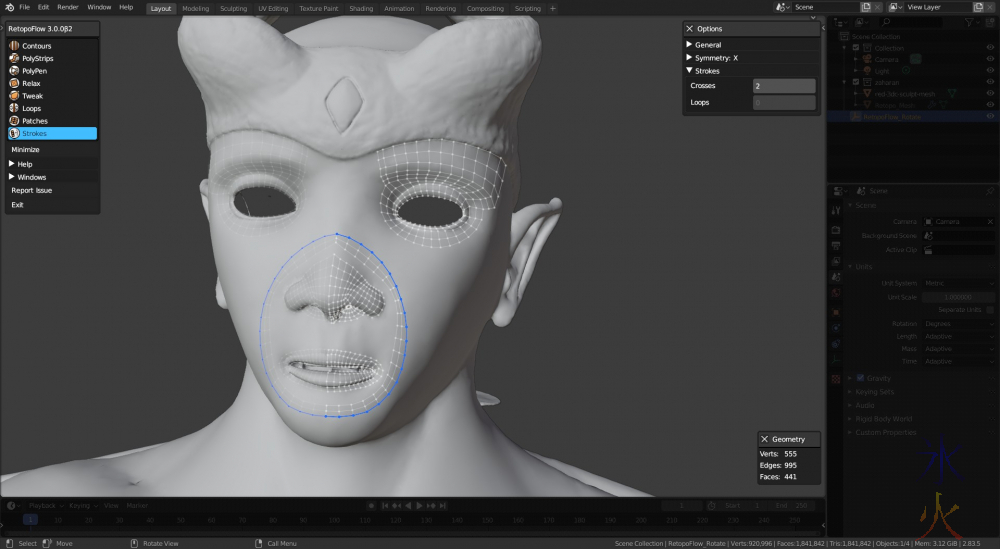 After a bit more playing around I actually learned how to use all of the tools (which were all available in 3dC, I was just too dumb to figure them out then), thought I figured out a better way to do the nose/mouth loop and proceeded to start again for the umpteenth time.

Finally getting familiar with the tools, I've sped up a bit.  Those double shoulders are still nightmare. 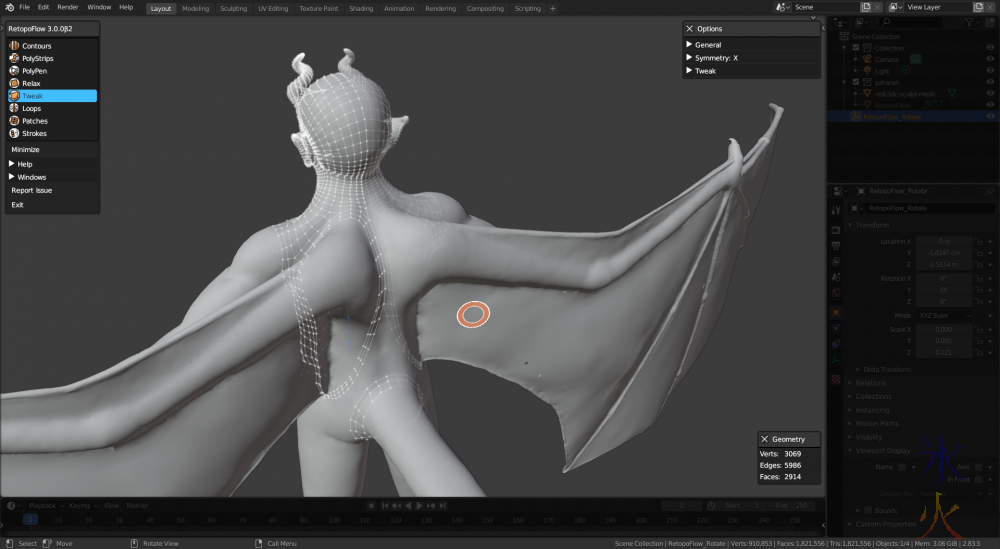 And this is what it looks like outside of the retopoflow interface within an interface (I'm currently running the assumption that there are reasons it has to be the way it is rather than a workspace) and in object mode rather than edit mode. 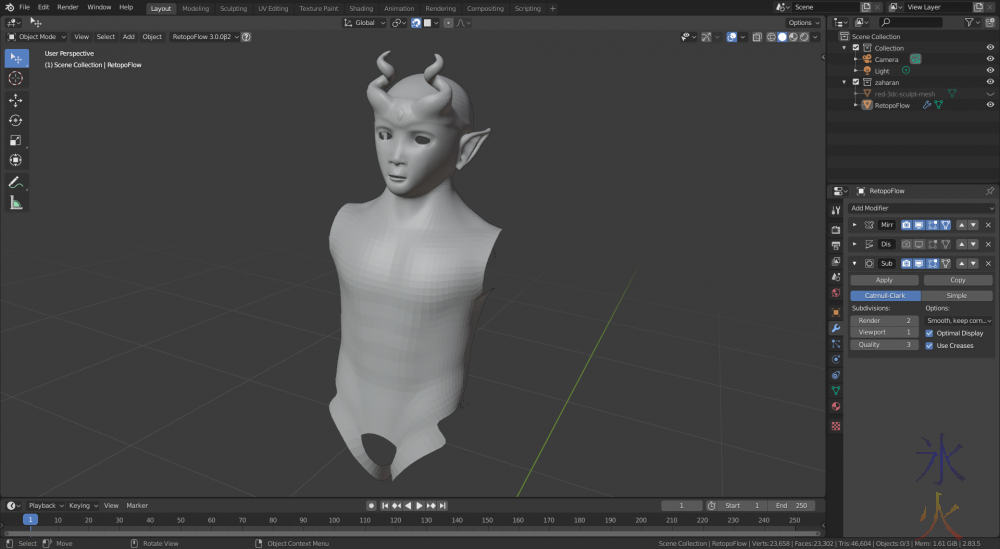 I usually have smooth shading on but retopoflow keeps making things with flat shading so I'm just going to do the lot at the end.  Being in the same program is so incredibly helpful as it's a lot easier to avoid making the mesh too dense as I can check how it looks with the subd modifier by exiting the retopoflow interface (and it was even easier with speedretopo because it worked quite happily with the subd modifier which I wish retopoflow would do).

Having Firefox and Blender both open for days on end is apparently not great for ram, though from looking at KSysGuard I'm guessing plasmashell has a memory leak somewhere as it's also nomming way more ram than it probably should be. 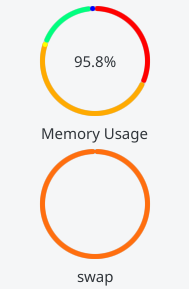 Hopefully I'll be done with the retopo over the weekend and seeing as everything is now being done in the same program I can do things in a sensible order and rig first, make sure the mesh is behaving for animating and then do texturing when I've stopped needing to fiddle with it.

Previously I was doing everything in 3dC that could be done in 3dC and sending it over to Blender because going back and forth is really annoying with the drastic scale difference that I could never work out how to fix even though it's allegedly possible and it always got painful if I hadn't gotten the retopo good enough the first time.

I'm still not yet game enough to retopo Zara yet again because she's already got uv maps, but that might change down the line if/when I figure out the baking shenanigans.  At this stage I'm almost definitely going to redo the Terran female base after I'm done with Red.  But probably after I've thrown Red and Zara in a scene together because I really, really want to animate.