I'm not sure what 11yo was doing on top of the grow beds, I think he was getting some higher up peas that they couldn't reach, that's him working his way down after being told to get down.  The pea plants have since cascaded to the ground and are now in the process of dying off.

We had a little family get-together down at our favourite halfway park (apparently the whole thing is called AP Hinds Reserve, we call it the Garrett Rd Bridge Park because we usually come in from that side and go to the picnic area near the bridge). 13yo is still really keen on the video editing and did a bit of that til everyone arrived.  Both 11yo and 3yo were quite determined to get into the water at all costs.  They ended up just walking up to 11yo's knees as they refused to admit that it was actually cold XD After lunch the big boys played footy and 13yo was playing with them but eventually came to join Nanna, Aunty, myself and the two small children as she claimed everyone else was hogging the ball.  We went a short way up the path that runs along the river reading some of the signs on the way through, looking at the different types of vegetation along the river and keeping an eye out for some turtles that a sign had said to watch out for (we didn't see any).

Over the school holidays (which due to the shortened term felt like they'd arrived in a hurry), both smalls had friends sleeping over (which was a pretty big deal for 11yo who has adhd and is one marker off an autism diagnosis, he hasn't had a friend sleep over for ages as we have trouble teeing up with his bestie who lives on the other side of the river).  The boys spent their sleepover playing outside during the day and watching movies at night.  The girls went shopping on one of the days and on the second night attempted to stay up all night.  I walked into the kitchen to ask them to quieten down a little and found them playing with knives, apparently they were pranking someone trying to make them believe they'd just stabbed someone so they'd covered a knife with red food colouring.  The two friends were then trying to take a photo to make it look like one of them had been stabbed through the hand with the knife, so 13yo asked the girl who was pretending to be stabbed if she wanted a fake wound.  She responded with an enthusiastic affirmative and the other playfully whined "I want a fake wound!"

Then everyone bar JJ and 11yo (who were sensibly asleep) got in on the fun. 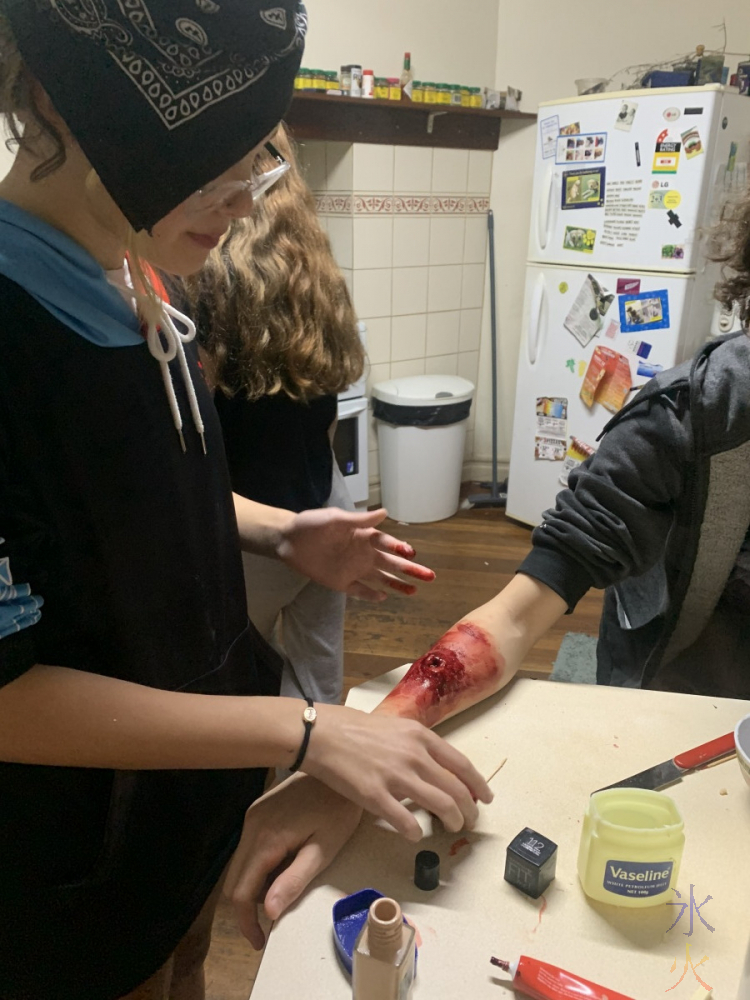 Pro-tip: take off jumpers and jackets before getting fake wounds.

The prank apparently worked so well I got to a point of telling the girls they needed to tell the friends they were pranking that the wounds were fake as some of them sounded like they were getting really worried.

11yo learned how to use chopsticks by picking up dice with them.  When you can pick up dice, banana slices are easy. 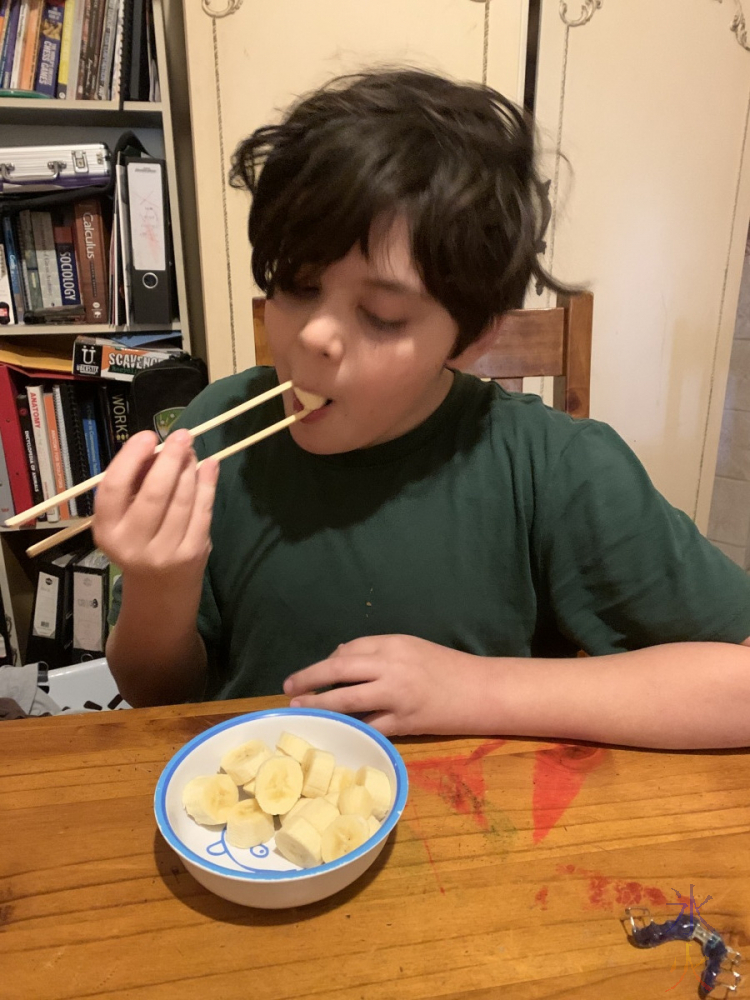 He also modified a box vanilla cake recipe as he confused the cake and icing ingredients and put too much liquid into the icing.  It wasn't salvagable so with Nanna's help he made some icing using icing sugar and lemon juice, and then decided to top it with strawberries. 15yo had one of his rare art bouts. He ended up making two characters for himself (one which was basically completed but he then scrapped because he wasn't happy with how it turned out, the second which he is happy with and just has to write a backstory for so we can start our game) and helping one of his friends with theirs.  A lot of poring over sourcebooks, scribbling notes and bouncing ideas off each other has gone into the makings of these characters.  And the way the "reality tv show" type household is going I'm thinking I won't have to make antagonists.

Finally, 13yo made a birthday cake for the youngest cousin's 4th birthday.  She decided to make it from scratch with frosting rather than using the box mixes we have, because apparently frosting is better than icing (I can't tell the difference, I just eat).  Due to the size of the batter she made and the size of the cake tins we had, she decided to make a two tier cake.  The problem was, the bottom tier didn't rise. We couldn't simply swap them over as the bottom tier was a lot bigger than the top tier.  While waiting for the other tier to finish baking, we tried to figure out what to do and 13yo came up with the brilliant idea to cut shapes out of the cake with cookie cutters, lightly place frosting on top and coat them with sprinkles, because everything is better with sprinkles. The shapes worked out reasonably well except for the giraffe which turned into a demented seahorse as its feet didn't make it out of the cutter, and then the rest of the legs fell off into the sprinkles bowl when it was dipped.

13yo then finished off the cake with some decorative piping around the base. Unfortunately I can't show photos of just how much 4yo loved it but he loved it.  Apparently he grabbed one of the stars around the base and shoved it into his mouth when it was placed in front of him and the candles were about to be lit XD

It was really tasty too, great end to the month.