There has been some hilarity with some of my previous progblogs as I've shared the dodgy looking things that usually end up happening whenever I'm building (at least characters, I haven't done much else recently x_x) The above screenie is not that dodgy, it's just highlighting those irritating bumps.  All I want is a perfectly smooth mesh but pparently there are vertices that just jut out for no apparent reason regardless of what I'm doing with autosmooth and the smooth brush settings.  I have wasted so much time on this that it's well beyond ridiculous.

I recently shared a verbal synopsis of hive's reactions with JJ and he joked about how I should put little slits on the end of everyone's (as in my characters) fingers.  I responded that was very likely to happen as the Dragonkin have retractable claws.  JJ just looked at me like o_O and wandered off.  I then decided to look up sphynx cats to see just how much trouble I was in for and it looks like potentially quite a lot XD 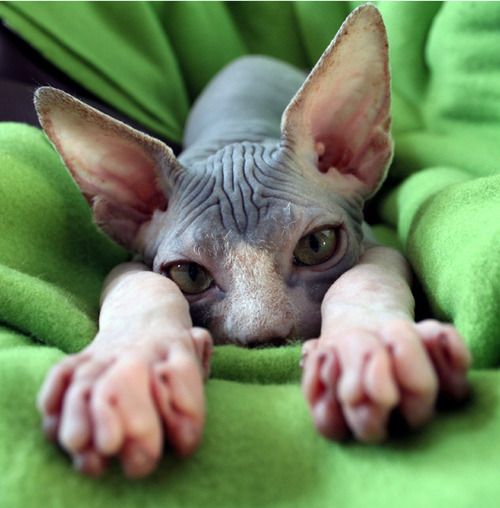 Completely unrelated I want one.  I told Sprat I would name it Uglee because I got to a point where I was wondering if the scale might be an issue (despite setting stuff in 3dC that was supposed to make it the same as Blender, everything I imported into 3dC from Blender was microscopic and everything I imported into Blender from 3dC was gargantuan), so I shrank Red down to his height from the couple of km tall he was.  Applying the scale somehow made him tiny so I sized him up again to the correct height and once more applied the scale and that one stuck.

I'm now pretending it's helped a little bit (I don't think it's made any difference).  In any case it needed to be resized at some point so that's at least another thing done that needed to be done.  I think the problem is in the smoothing algorithm seems to prefer flattening even though there's an actual flatten brush.  I have no idea.

And why yes the fingers currently still look as dodgy as ever seeing as I had to backtrack a little bit. I think I'm doing better this time round maybe.