I'm calling this one a "success" because only one pants leg flew off instead of both, and mostly because I had things up pretty high (subd level 3 and 35 quality steps on both the overall thing and collisions).  On the bright side it looked pretty and did clothy things when it flew off x_x  Lower settings would work with normal people and in normal situations because I use Zara to break things (she can move pretty quick, jumps around a lot and is very bendy).  So basiucally I can now do cloth sim (to some value of doing) so that's what I'm going to be using for things that flow.  For tighter clothes such as the croptop and the forgotten arm socks, shrinkwrap and mesh deformer modifiers seem to work (and may require some shapekey assistance).  Mission accomplished.

Unfortunately you can't see the lovely folds the pants made because she's not still in the right positions for long enough and the pants are dark coloured. 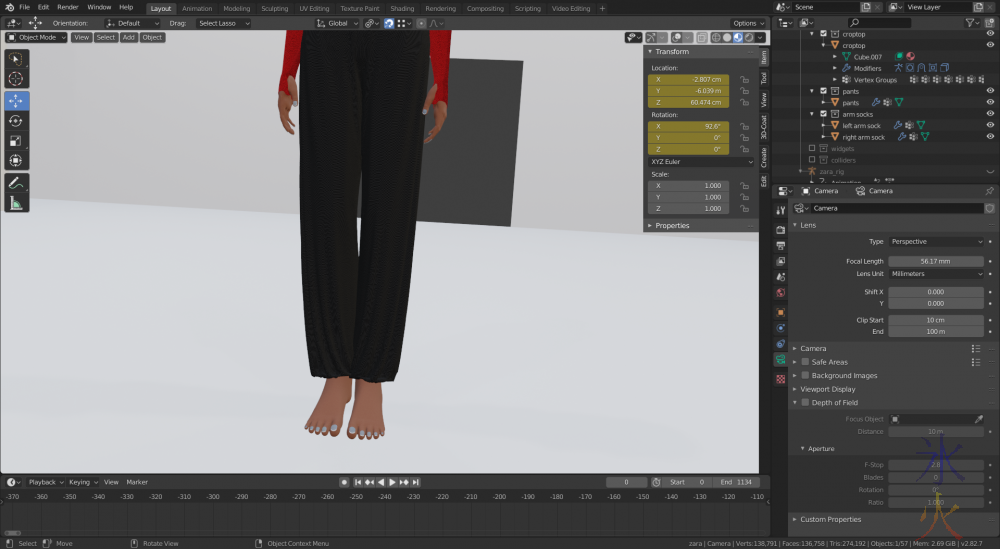 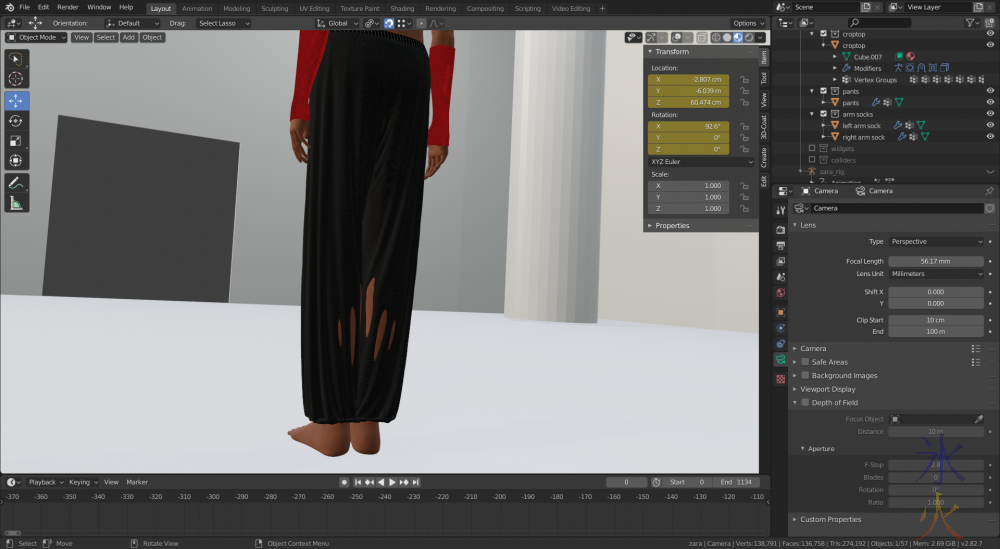 Also apparently the collision object was clipping the render mesh a lot more than I thought it was.  In an actual anim I would have made sure there was proper coverage or just used the render mesh as a collider which is entirely doable as that's what I was doing originally, just exquisitely slow when your meshes are like 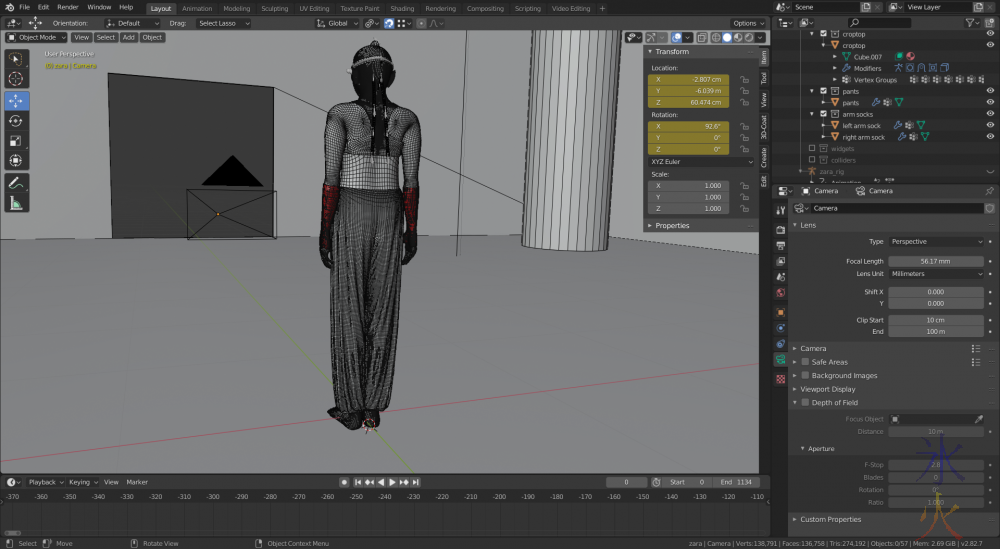 The cloth sim appears to have issues with pointy areas.  I did find one topic on Blender Stack Exchange where someone was having issues with the cloth mesh they were dropping onto a pyramid bypassing the top point of the pyramid which is how I figured that was probably the issue I was having here.  This was the first problem area I encountered and the mesh was only able to recover with the subdivision settings at 3. 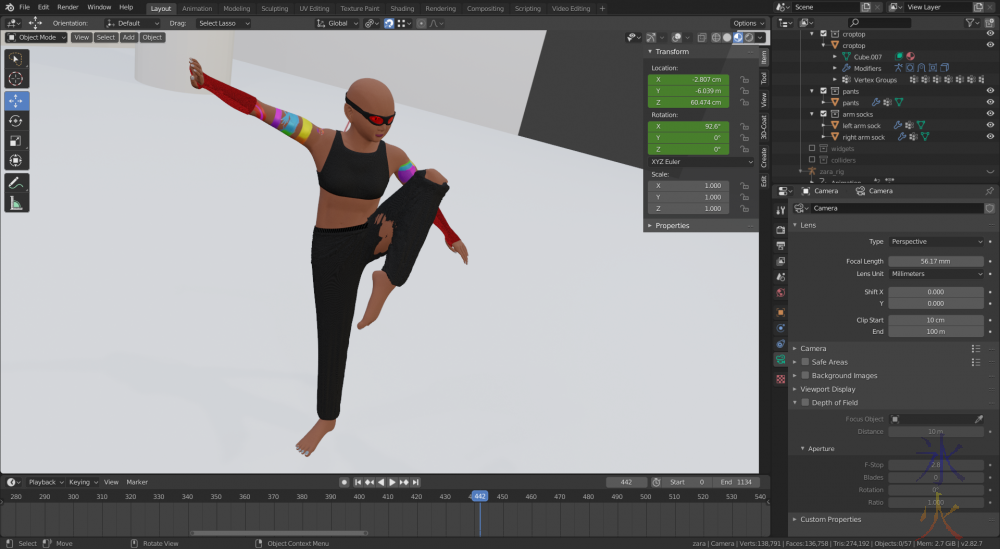 Prior to that, this pants legs would clip the knee and then eventually through the entire leg and merrily go flapping around.  I was able to partially mitigate complete breakaway by very loosely pinning the ankles and letting it have the weight maps from the armature (like the waistband which is pinned at full strength and has armature weights) but at the lower subdivision and regardless of quality steps, they would still come undone.

At this point everything kept falling apart. 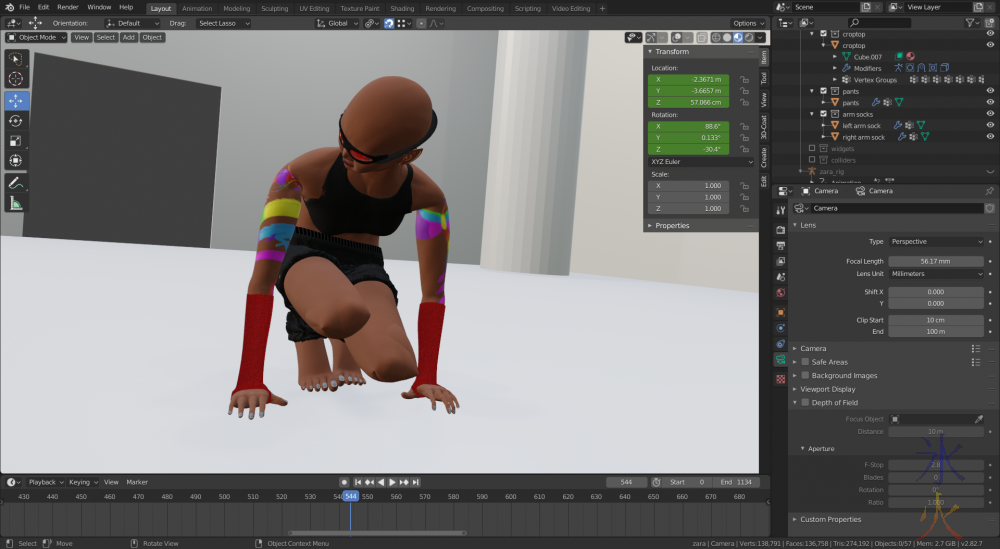 I think the major issues here were a very rapid drop into the crouch and the legs were clipping themselves (we'll just ignore the fact I didn't do any shape correction whatsoever because this is all about the pants XD) and the poor cloth just could not even.  The leg that straightened into the leg sweep was able to recover (the pants went back on) but the one supporting the leg sweep must have stayed bent and clipped too long as the cloth then billowed around it and once it was through that was it.

It did a very good job being clothy in its partially attached state but not quite the look I was after.

The clothing items have been appended into their own files for theoretically easy linkage later (further experimentation required to see what I can get away with as far as objects and texture maps go).

And now I'm onto fixing Red's sculpt mesh in Blender (too heavy for Blender but too many problems in 3dC so picking the less annoying option) before sending it back to 3dC for retopo (again) and hopefully the normal map will be better as there won't be the random breakages 3dC is doing. 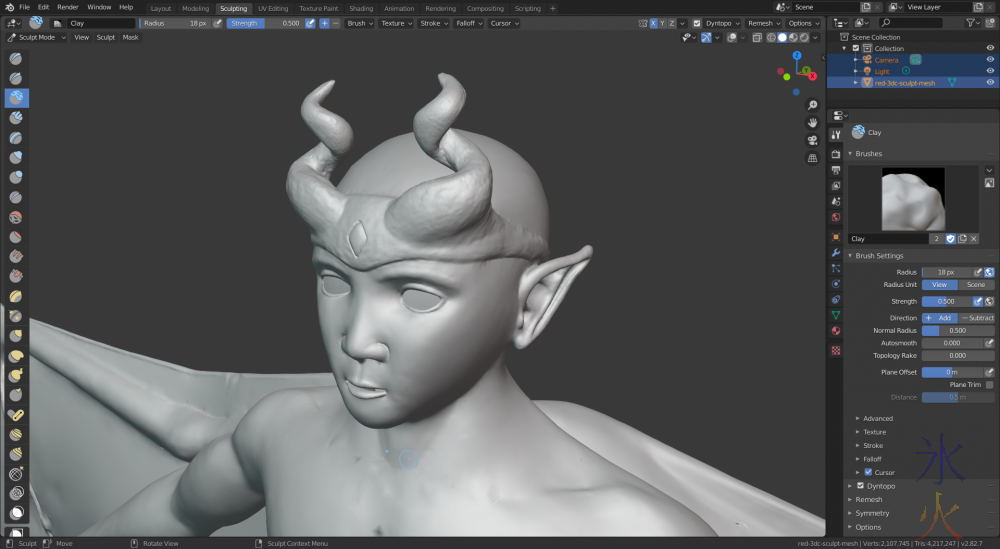 I'm starting to think the linux version of 3dC is never going to be updated again and that perhaps it's not worth the effort as I might be the only person using it (statistically unlikely but anyway).  It's lagging a way behind the Mac and Windows versions.  At this stage I'm only going to be using it for retopo and painting as I've broken sculpts way too many times now and if I get similar glitches in Blender (I'll work that out when I start a character sculpt in Blender rather than using 3dC imported sculpt meshes like this one is) I can at least fix them.

Relief to be moving again!

Several months later because it appears my comment notifications are broken, yay I'm glad you think it's a success! ^_^;