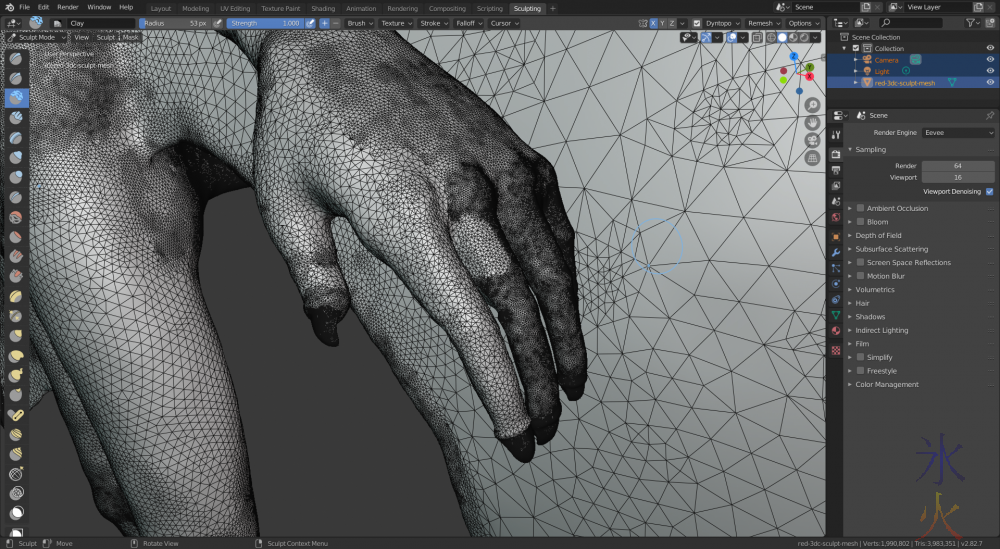 On the hand the denser bits are the bits I haven't touched yet, though on the thumb there are just denser bits as I moved in closer (I have both dynatopo and remesh on, controlled by brush detail which seems to be based off however big the brush is).  I'm fixing up a lot of shapes (the fingers of both Red and Zara are really spindly) and I'm not looking forward to fixing up Red's tail (at least I can move it down relatively easily in Blender though it will probably chug).  I can get the mesh a lot smoother than I could in 3d-Coat (it's still unknown why the mesh was persistently lumpy in 3dC, with or without dynatopo/liveclay, and apparently nobody else knows either) which is the main critically important thing for me at the moment as I'm using the sculpt for normal maps as well as shape and I only want some textures appearing in the normal maps, such as scars and the horn patterning.  Skin textures are getting done with materials,

Everything was going fine til I touched something (still don't know what, there's so many obscure random shortcuts in Blender that all you have to do is keystroke because you're looking at something else and don't realise that Blender is still focused because your stupid mouse is stupid and left clicks don't always register) and you've done something and you don't even know what, but anyway this happened 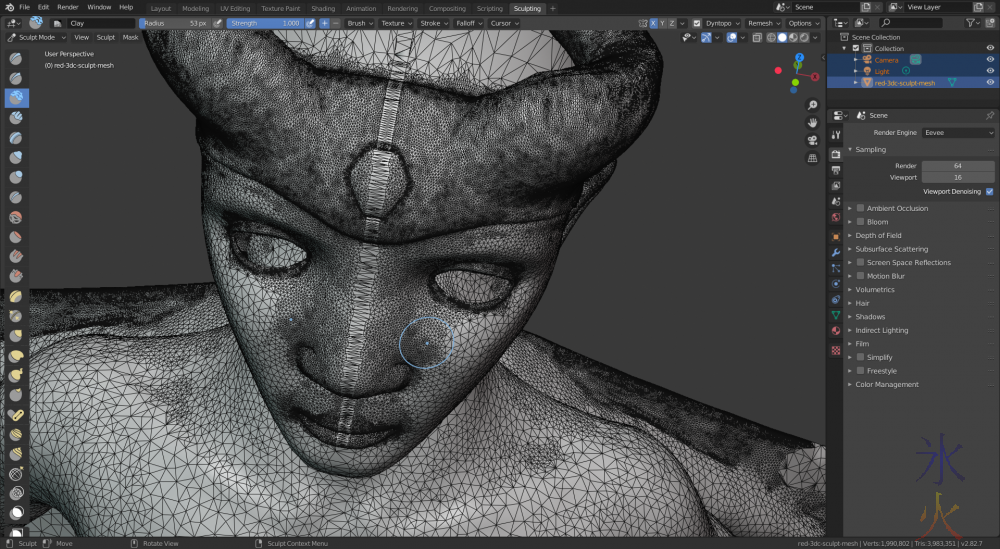 and I'm pretty pissed off about it as I really didn't want to touch the horn crest as that's one area where the texture differences are probably going to be really noticable.  Guess I'm now forced to see how good my sculpting skills are (not very).

And...the "scripting" is mostly just there to alliterate.  I've done a bit of proof-reading and editing of my scripts, as there was one relatively major change (I decided that Gnarus is going to be what he changed his surname to after the incident that sets him on the path to becoming one of Perth's major crimelords, and that his nym would be Kurenai and he would only speak Sona and not let on that he's perfectly fluent in English, and aside from having to do a lot of translations it's working surprisingly well though I kind of miss his rather over the top pompous arsehole English dialogue) and a few minor ones (little dialogue and action tweaks for better characterisations and some other action tweaks to make more sense or make things flow better).

Listen to me sound like I have any control whatsoever over this thing.

The other part of scripting I might have to do is learning freaking python (which I've been studiously avoiding doing for the better part of forever because I am so strapped for time I've pared everything right back to just what  I'm doing now) because I recently found out (after re-downloading all my add-ons plus more that looked like they might be cool) that Gramps (family tree thingi in which I'm managing my actual family tree as well as the AER one) can do custom calendars, all you have to do is a lot of work (it might not be a lot of work but it looks like a lot to me because I don't know python) which is a thing that I need because AER has its own calendar.  I'm currently trying to con J into doing it for me but I don't think he will :<

Other than that I'm still copy-pasting everything from my database dump into my Drupal-powered outliner notes thingi.  I'm now into the next block and 37 more pages to go! (it may not sound like that much but all paragraph breaks have been stripped out of the database dump so each page is a giant block of text that I need to sift the events out of) I'm definitely looking forward to that one being done so that I can concentrate on adding to and fleshing out bits of story in there.  Currently I'm being amused at how much drama seems to be packed into a very short space of time.

Thursday streaming
Ear wip
June ProgBlog #4: and I would have gotten away with it too if it weren't for you meddling kids and your darned dog!
Calling the horns done
June ProgBlog #3: Noob Errors!
October ProgBlog #3: normal madness
To some value of working
Twisty horns from hell
June ProgBlog #1: textual feeling