The numbers aren't settings to use as a rule, just whatever I was playing with at the time I took the screenshot.  For normal/general situations a step quality of 5-10 and subdivision level of 1 should suffice.  If there's combat or other rapid movement, they'll need to be bumped.  This may involve a lot of experimentation.

Collision settings need to be set on the collider for hair and cloth to...collide with it and theoretically not clip through.  Thickness outer needs to be as small as possible, thickness inner needs some fiddling til the cloth bounces out somewhat reliably if it clips through. 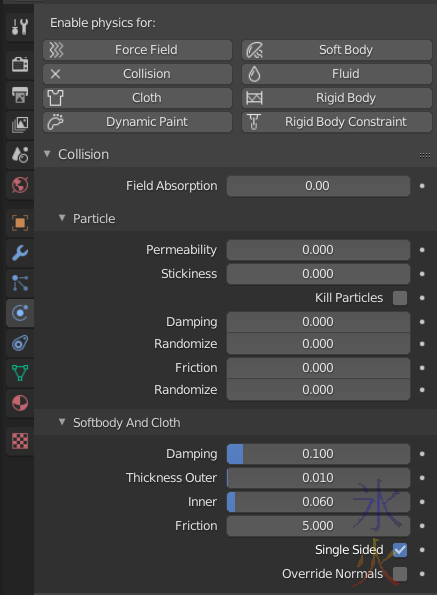 Put the cloth sim after subdivision and before solidy in the modifier stack. The order executes from the top down (yes I know it's blatantly freaking obvious when you know what you're doing but I do recall a time back when I was still new to Blender a hundred million years ago where I didn't know how the stack worked and thought it was just a list of things on the model).  So what's going on in the pants stack at the moment is:

Pin groups are required for waistbands and other bits that aren't meant to move much (otherwise the clothes merrily fly off and do their own thing).  Use clamping if the vertices keep spiking randomly.  Also add the collection your collider is in to the "collision collection" panel. The distance is how far apart the meshes should be before it starts to calculate for collisions.  I usually set it to about the same thickness as the solidify modifier, and given that my collider shell is already about 3mm off the render mesh that should help prevent most clips with the render mesh.

Things seem to work better if only the pin group has armature weight maps and the rest is driven by cloth.  The vertices in the pin group doesn't have to be 100%, they can be less so they're partially driven by the armature with some cloth effects which I eventually did (waist is pinned with weight of 1 ie completely pinned and ankles are pinned at 0.75 so they're mostly armature driven but react to cloth physics which stopped a bunching issue and helped keep the pants on).

Start in the negative frames in the default pose (which is a modified arrow in my case), then click the little stopwatch thing next to the frame range to switch to preview range (the timeline/dopesheet thing will change colour) and you will then be able to set a negative start time.

And don't forget to change this bit in the physics tab: Run the animation to build the cache.  If the cloth starts misbehaving too badly (don't stress about minor clips, they can be fixed later, we're talking the clothes have managed to clip all the way through the collision mesh and are in the process of flying off) then stop it and tweak settings and try again.  Blender's cloth sim seems to really, really struggle with pointy bits especially if they're moving at high speed (so pretty much knees when your character is doing tuck jumps and jumping kicks, imagine the same thing would happen to elbows but I haven't done a long sleeved top yet).  For this particular character I've been bumping quality steps by 5 til the pants legs are clipping through the leg but recovering back onto the leg rather than clipping through and flying off before upping subd level, rinse repeat. Lower subd levels are a LOT quicker but also seem to stretch the polygons at times which subsequently causes exploisions (clamping might help), higher subd levels bog things right down but you get really pretty folds and a lot more stability.

I eventually managed to fix the above problem but if subd level 3 doesn't fix this (current settings are subd2 and 30 quality steps) I don't know what will. When you have something perfect (well done!) or near enough and just needs some minor repairs (more likely) you can hit the bake button which should then save that cache into the blend file so you don't have to do it again.  There is a delete bake button if you need to change something.

Theoretically you're supposed to be able to edit the bakes afterwards and then rerun the simulation from your fix and then bake the fixes, but I still haven't figured out how to do that.