April ProgBlog #3: the sleeve bone's connected to the...

Actually the clothes bones aren't connected to anything.

I had one more go with playing with lattices and bonevelopes for the croptop rig, and then went back to the straight bonevelope rig and added a few more bones and made all the bones smaller and with smaller envelopes, as I had a lot more control over the shape and the twists of those annoying little shoulder straps with the bonevelope rig.  It's holding shape a bit better. There was one bit that was annoying the hell out of me, and I eventually worked out it was because the weight maps were screwy. Fortunately it had only been recently that @rainite had reminded me of the existence of transferring weight maps, which had of course moved in Blender 2.8 because why not everything else has.  I eventually found it in Object > Relations > Transfer mesh data after a quickie search.  It's also apparently in the weight paint section in the little Weight submenu thingi but I'm too scared to do anything from any of the painting modes for this kind of thing in case I accidentally touch something.

So first order of business, recreate the vertex groups in the croptop mesh (they were DEF-shoulder.R and L as I use the rig that ships with Blender because I hate rigging and the shipped one is pretty good).  Then select croptop first, Zara second, Object > Relations > Transfer mesh data and now it's behaving itself because it got the shoulder weights that I somehow managed to accidentally delete when I was clearing out the superfluous groups that happens when you parent with automatic weights to armature. 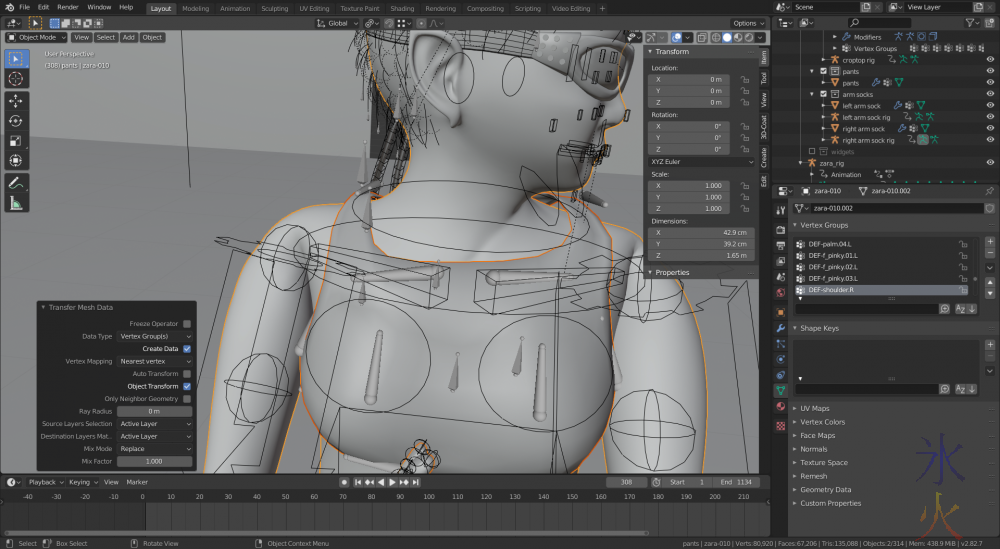 This cross-over part was my sticking point with every iteration of this rig.  It's parented to the chest bone (the big horizontal disc going through the shoulders) which is fine as long as your character isn't Zara who tends to be in unusual poses. It was also about this point that I started watching the arm socks again as well to fix the holes that would intermittently appear. I was hoping to get away with just the big bones at the back but after experiencing an annoying twisting issue with one of the straps I split them into two, and then ended up splitting the strap bones into two as well (using subdivide as I didn't want to lose the existing keyframes, and just modified the position and rotation of the smaller bones as I needed to).

Successfully got past first cross-over.  Fun (once I get past all the other fun bits x_x) will be the backtracking and checking to make sure that all the adjustments I made to the bonevelopes didn't mess up stuff I'd already done (it's usually fine or just requires tweaks but sometimes it's really not).