April ProgBlog #2: the sleeps are borked

For once I actually had a good reason about not getting the progblog done on the Friday.  13yo and I spent the entire day making a sign for a birthday driveby.  Saturday was the actual driveby and because I'm really smart and hate driving I decided I would rather hike it in 39C because that's how much I hate driving (it was just down the road).  That coupled with drifting back into habits that I've had since childhood that not even 12 years of strict bedtimes and wake up times and attempts that always fail despite people screaming at me that it absolutely is just a bad habit and I'm just not trying hard enough, I quite simply work much, much better at night.

The arm socks are pretty much the last rig left as the rig on the rest of the clothing items that are using rigs seem to be working out all right.  The lattices eventually drove me a bit too mad so I went back to trying to work out why the bonevelope rig worked for the croptop but not for the armsocks.  The stack for the croptop looks like 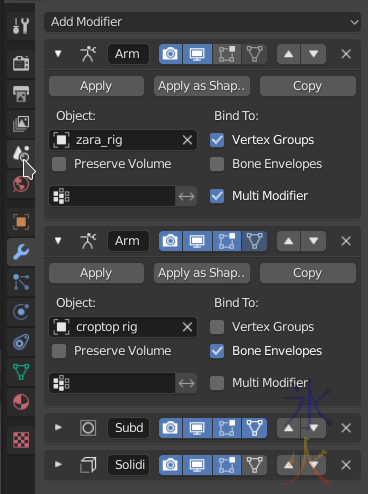 (I've collapsed the subdivision and solidify modifiers to fit everything in, and multimodifier doesn't actually do anything if it's first in the stack, I just forgot it was checked until after the screenie uploaded and I'm too lazy to change it) 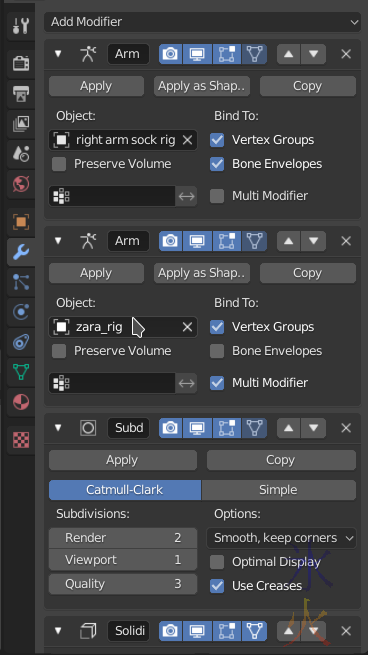 The difference between the two is just where the main armature (called zara_rig in this case as I name them all {character}_rig) is located.  Logically the arm sock rig needs to follow the main rig and it does thanks to bone constraints but apparently in the stack it has to be this way round to work so whatever.  In this case the multimodifier is needed as what it does is it uses the position/shape the mesh ends up in from the previous rig and adds to it instead of trying to do everything by itself (which causes chaos and confusion and usually unwanted results).

I also don't fully understand how the "child of" bone constraints work as for some reason when the bones were driving a lattice, I could set them to have 0.5 influence from two bones and they would follow the parent bones around fine til I moved them.  With the bones set up like this and doing the exact same thing (as far as I can tell), setting two bones as having 0.5 influence makes the co-parented bones end up not where I want them and causing a lot of drama.

Not having the two bone influence means that the bones behave up to the point where I have to deal with the eternal nightmare of forearm rotations, where Iend up with a mess like this 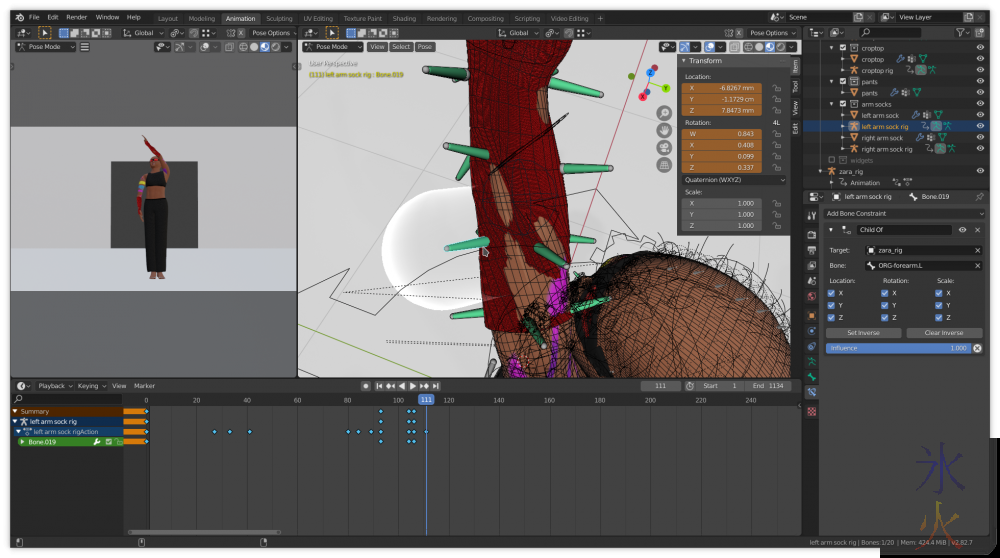 Yes I am slowly moving the bones around so the arm sock is less twisted.  It's fine.

This is hopefully what I'm going to end up going with as far as arm sock rig is concerned, it's already a lot further along than the last godawful thing was.

Once I finish animating the arm socks and croptop the next version will be playing more with physics, both figuring out the cloth sim (yep that's what I'm going with after all that) and how I'm going to manage short hair (because I've already tried managing long hair without curve guides and yeh I have no idea so long hair is most definitely getting guides XD).

Feeling kind of stuck again but just have to keep telling myself that subsequent characters will be quicker once I have all this crap worked out.