Guess I better blog the prog even though I don't feel like there's a lot of it ^_^;

After naffing about yet again with various configurations of bones and lattices and constantly stressing about how I want the bloody end result to look (including whether or not I wanted loose hair to be combed and only wind affected or soft bodied like styled hair will have to be and "have to" is loose because I currently only know one way of styling hair in a fashion I can control), I tried cloth dynamics again with a much higher density and slightly more squarish mesh (and also fixed the mess the pants mesh was, I didn't realise it had borked badly as I usually look at things like how the screenshots are and without the wireframe lines) and it's kind of working now.

I had this problem where it would puff up like so and I could not for the life of me figure out why. 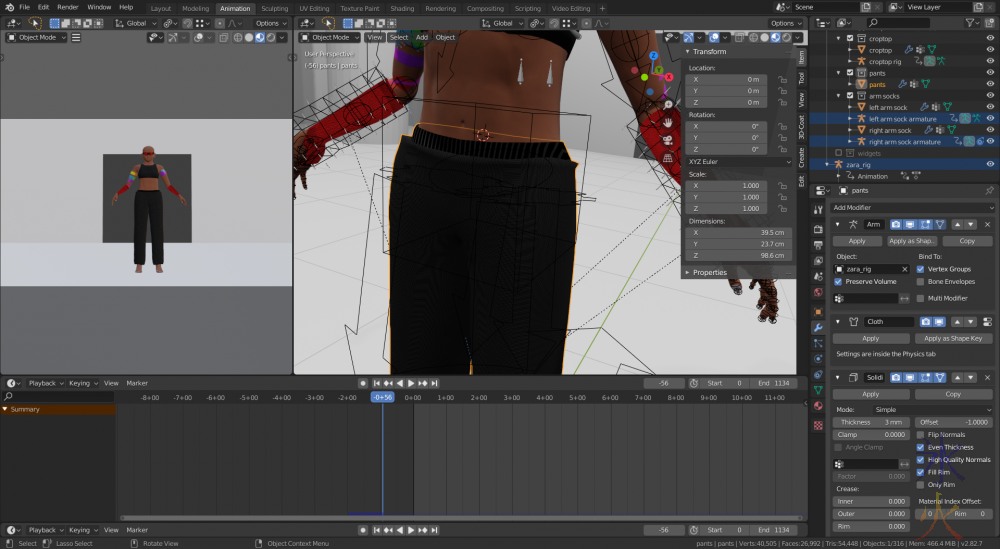 Further reading (so much reading) said something about model scale not being right (I would rather mess around with rigging which knowing my luck will happen anyway if the cloth dynamics doesn't work out than change the scene scale as that seems to wreak havoc with hair and I don't really want to do the hair again).  Fortunately it seemed to be a much simpler solution of I just needed to make the "thickness outer" smaller in the collision settings for the character. 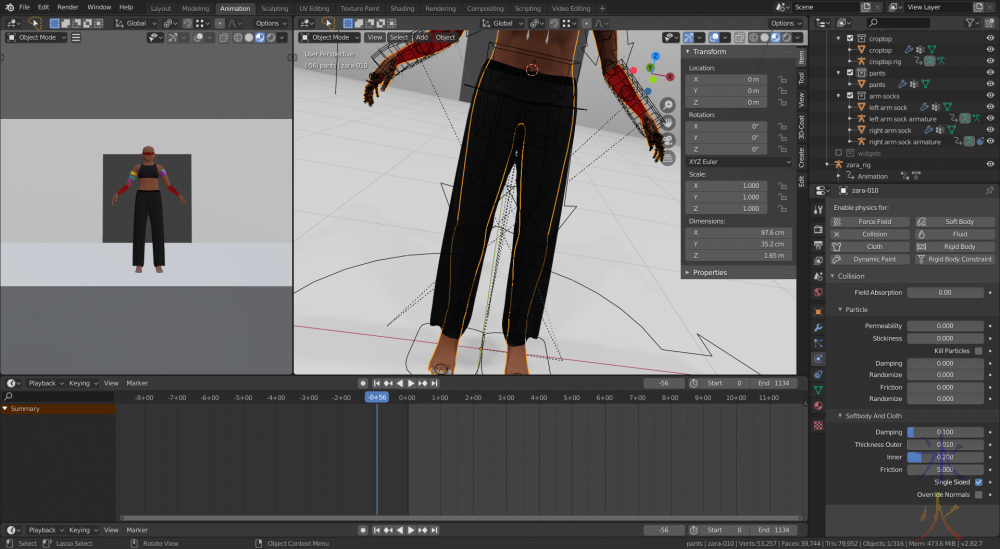 A new problem I've since encountered is the cloth suddenly turning into a porcupine on occasion. 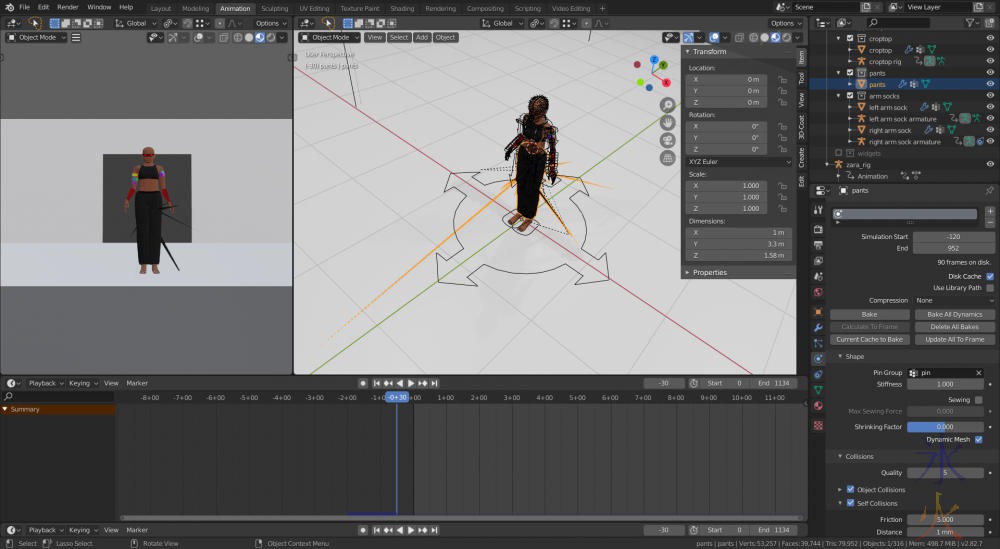 This is probably going to keep me busy for a while longer (it's most of what I've been doing last week).

I've been taking mini breaks and playing around with the two boxy lattices that are controlling the arm socks to see how long they take to annoy me (bonevelope rigs didn't work so if this isn't too efficient either I will have to resort to hooks and I hate hooks).  If things annoy me enough I'll jump over to keep working on fixing up Red which will then give something different to look at with the progblogs other than these stupid pants.

Which at least seem to be staying on for longer as we usually lose them about this point where either the leg that was moving flies off or the whole thing scrunches up and flings itself towards the camera (I really wish I'd been able to render that one out but it wouldn't even replay when I ran it again XD). 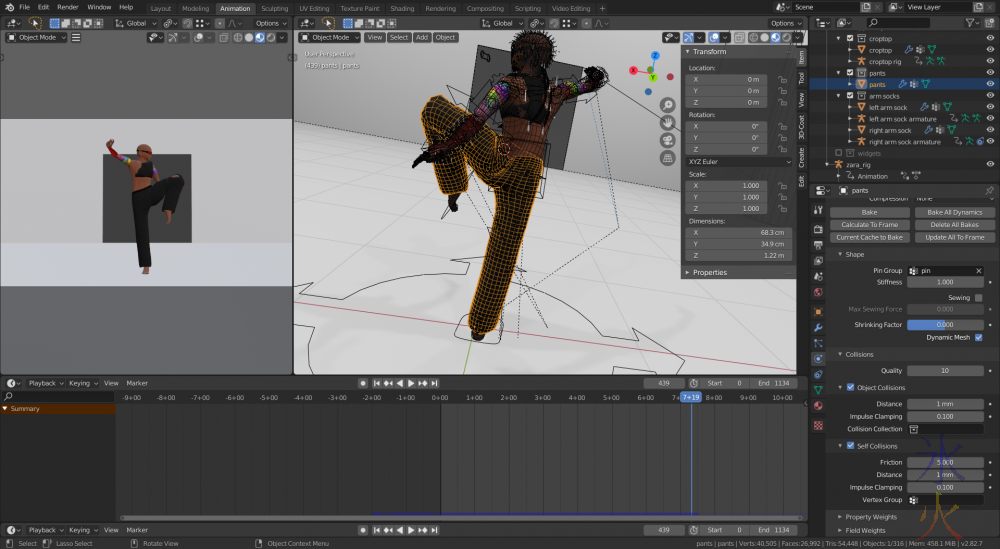 I may also give it a shot with one more level of subdivision (though I think this might already be a bit heavy) to see if I can reduce stretching around the crotch area here: 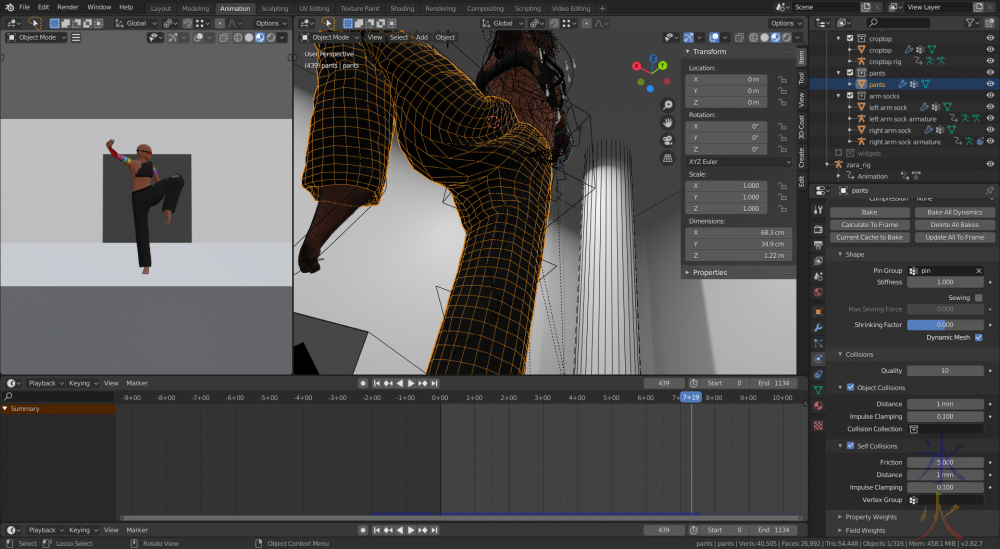 Not sure if it will make a difference but seeing as I'm trying everything else.

I really hope I have this shenanigans resolved soon (I don't even care if it's with cloth or rigging at this stage as long as it's resolved I want to move on).