March ProgBlog #3: did it work?

I think almost everything where people might gather has pretty much been shut down thanks to dumbarse virus, so we're just at home now aside from when we go out to "exercise" (which is to say the bigs and I aren't really doing much and J is taking youngest skating every day).  I thought an upside would be that I would have more time to work but that has yet to happen.  A lot of it has been to do with staggering around trying to find a new normal, as I don't think we're fully in lockdown so we can still go out, they just want a lot of social distancing so I need to find places that are far enough away from other people to take the kids that I can also drive to without further destroying the problem shoulder, which means we might need to just wait for J and do it over a weekend or have him switch up a work day or something if that's a possibility.  There are some nice bushwalks we could go on but it would just be with the boys as middle child hates bushwalking.

So meanwhile I've been trying to get them to do bookwork and it's a hard slog because all of us hate bookwork.  I'm currently aiming to make sure it gets done on Mondays when we'd normally be at homeschool group and then will try to add in more over the weeks.

And that's where most of my time has been going, around the usual housework.

Now last progblog I was finishing wiring up a lattice to a bunch of bone hooks.  When that was finally done it worked really well...until I attempted to attach it to the main armature for ease of controlling.  Let's just say things didn't go well and I spent an inordinate amount of this week failing to fix it.

Early yesterday I remembered that bones can rig just with envelopes.  Derp.  So I did that up. 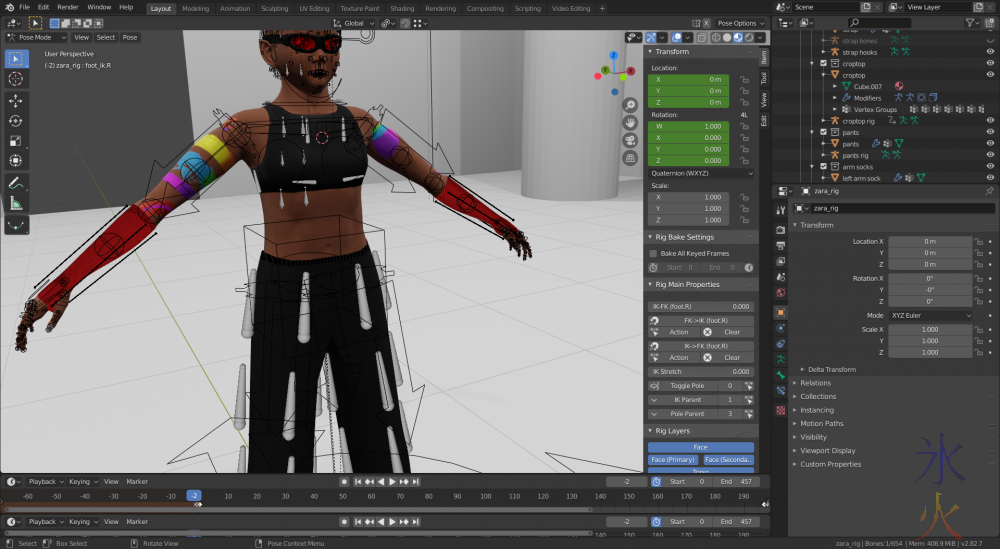 Simple testing of individual bits worked surprisingly well, but then again so did using lattices (which I don't think worked as well as this but it still worked).

Now where I may have gone wrong is in using the "child of" instead of "armature" bone constraint when attaching the smaller armatures to the main one, but in my defence the former seemed to make more sense at the time. 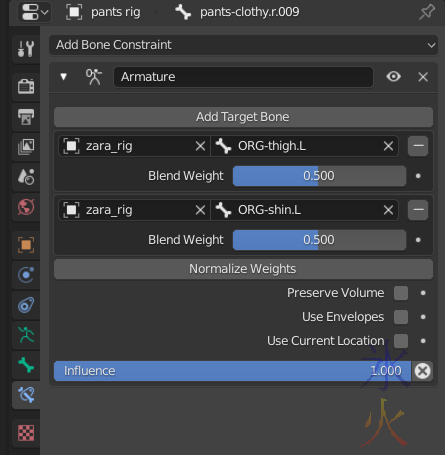 The above screenie is for the bones around the knee area where I found it best to split the weight between the thigh and shin bones so that the bones controlling the knee would actually kind of bend and make my life a bit easier.

It started out surprisingly well, with some minor having to switch into wireframe mode to see what the bones were doing as I was struggling to grab the correct ones to unglitch the pants and switching the bone directions when it entered my thick skull that I could also rotate the bones to affect the shape of the pants and the bones pointing down was easier on my meagre brain. 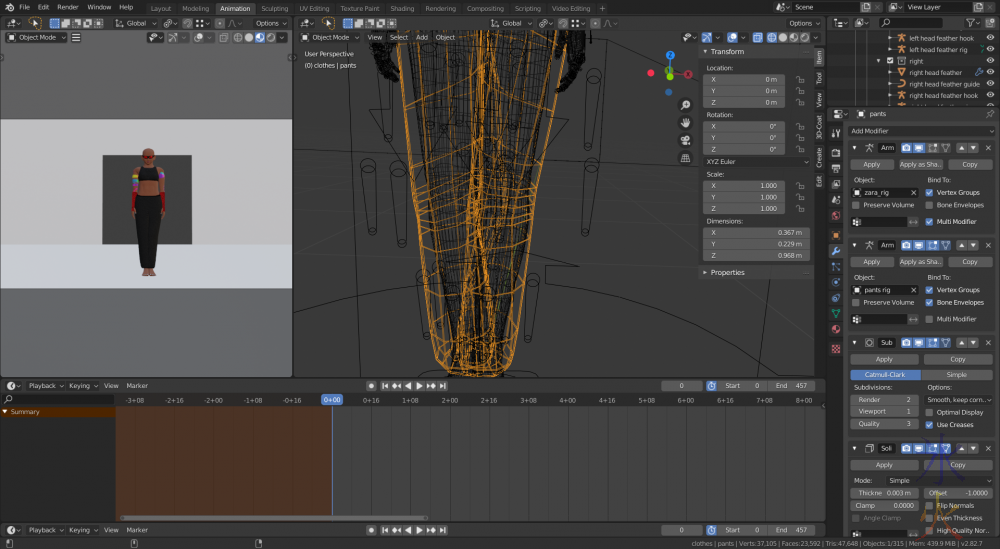 And then I found out that some of the bones were losing their influence when they were so close together.  I don't know if they're losing influence to other bones and can't get it back as the animation progresses or because they were too far out.  Wonder if bone influence works like social media influence.

The next logical step was to see if this shenanigans would work with the lattices.  First order of business was clean up.  For whatever reason I hadn't applied transforms on the clothes rigs (probably slipped my mind as you can't apply transforms on lattices and have them work properly), so needed to change bone constraints so things wouldn't disappear (I found out the hard way when I went to apply and reparent first).  For whatever reason the copy constraint tool has issues with the armature relationship and while it will copy the constraint it won't copy the rig and bone bits (but will copy the checkboxes), so I had to go through and do that manually as well as delete the original child of relationships manually. 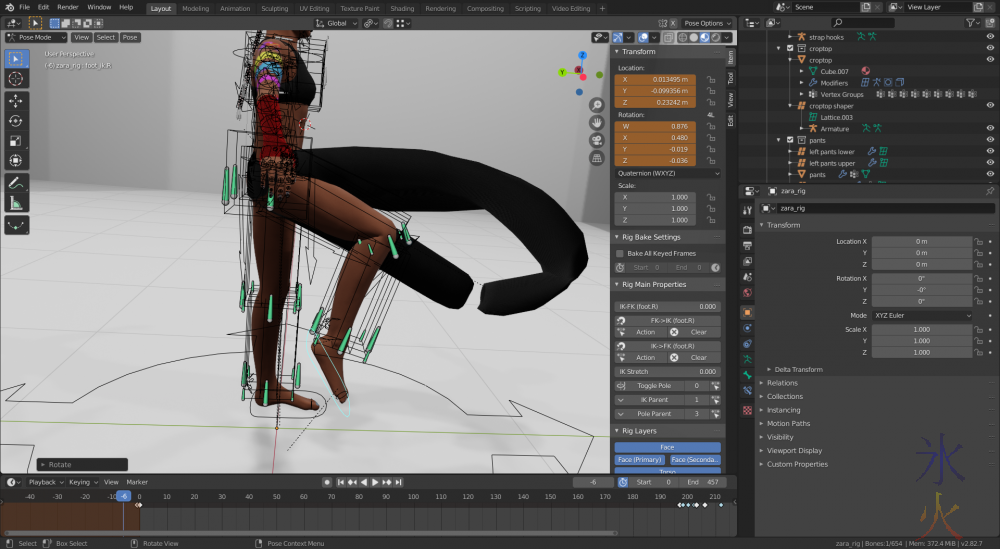 Above is exactly what was happening with the munted parenting, dodgy bone constraints and hooks.  I guess I don't know how to set this up properly.

Back to the bonevelope version (as I've started calling the one using only bone envelopes).  Currently I'm chugging along frame by frame trying to fix glitchies.  This seems to be involving increasing the sizes of the bonevelopes to terrifying (but at least it seems to help prevent bones stealing other bones' vertices) and I hope I don't regret this XD 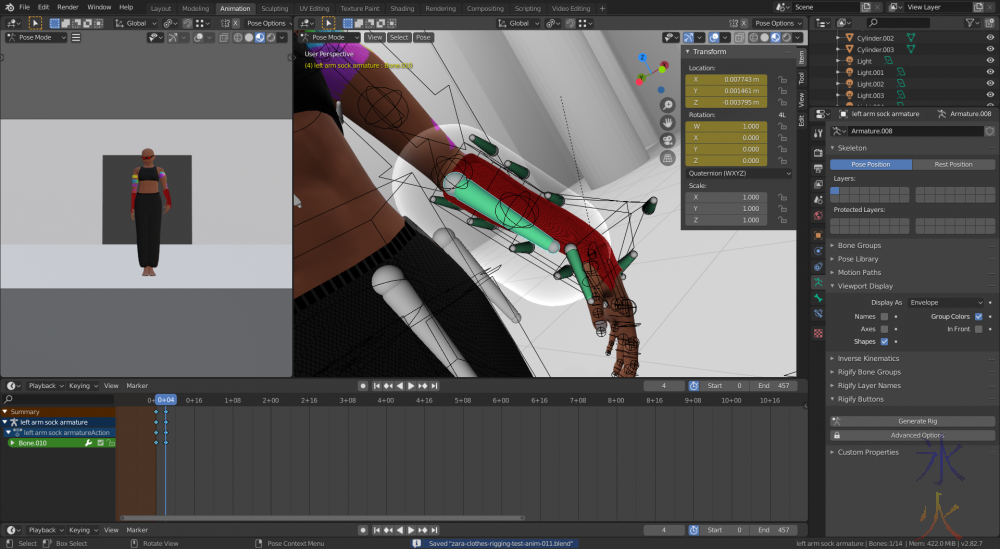 I did find out that lattices actually work better for the arm socks so I guess it's just figuring out what to use where and when.  Because why test one thing at a time when you can completely confuse the absolute hell out of yourself and test several things at once, so as well as testing bone envelopes on clothes, I'm testing how many bones I need on the lattices for the arm guards.  The left one shown above has got a ridiculous setup with two bones down each side of the arm and five on the top and bottom.  The other arm is going to test whether two on each side and two stop and bottom is better or worse, if they're both as bad as each other another one I'm going to build out tomorrow as got five bones on all sides.

The script is closer to done and also undergoing a few changes as I realised that the shorter groupings down the bottom only have -n forms, and that I preferred the -n form to have the underline and the vowel forms to have the smaller marks so the entire grid is very slowly getting changed. 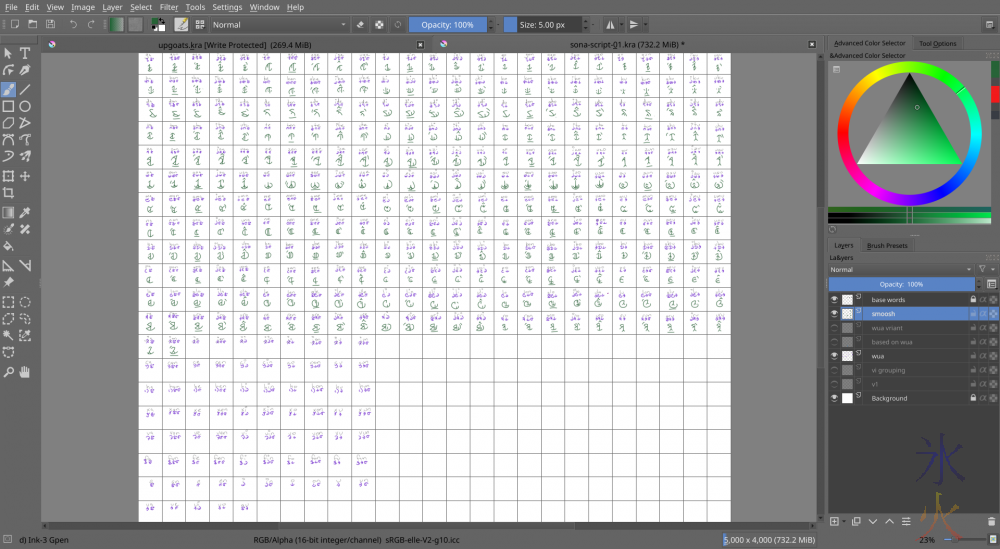 If you can see the document titles yes I am changing the footer text for people still using their upgoat/cute critter footers if they want them changed.  I accidentally changed "follow" to "comment" (was only intending on changing "resteem" to "reblog", not even sure how the second change happened), so far the two people I've changed over haven't minded but if anyone prefers "follow" it's no drama to write.

On the subject of languages, I am still finding it somewhat amusing that after going through all the effort of finding an existing conlang (Sona) amd an existing conscript (World Unity Alphabet) I still ended up doing this shenanigans (for whatever reason I thought it would be a great idea for all the Sona sounds to have one glyph instead of 2-3 seeing as the idea for the sound-for-a-concept idea seems to have been derived from Chinese/Japanese anyway as far as I can tell from the Sona book) and also a chunk of a discreet sign language used by Underground which can be used on its own when silence is required but is usually used during a spoken conversation which may or may not be related to the signed one as it's supposed to be discreet and not noticed by people who don't know it.