I missed my Tuesday ko-fi update because there was a huge kerfuffle on steem.  I had nothing to do with it (didn't participate or contribute anything aside from using the rest of my witness votes) because it was way over my head and out of my league.  It annoyed me enough that concentrating on anything important was hard so I did what I usually try to do if able when annoyed and drew.

I was going to draw an exasperated Ryivhnn but ended up with an exasperated Twilight sea dragon/eel/thing instead (the crypto sea theme is embedded somewhere in my brain I guess).  Had to turn off the colour layer to be able to see what I'm doing.  The pencil brush is pretty damn quick these days (or maybe has been like that for a while and I only just noticed as I'm slow) so I will actually be able to use it for sketchy colours.  Meanwhile this was supposed to be a sketchy (hence the colours all on one layer) but it's gotten away from me (hence multiple light/shadow layers). 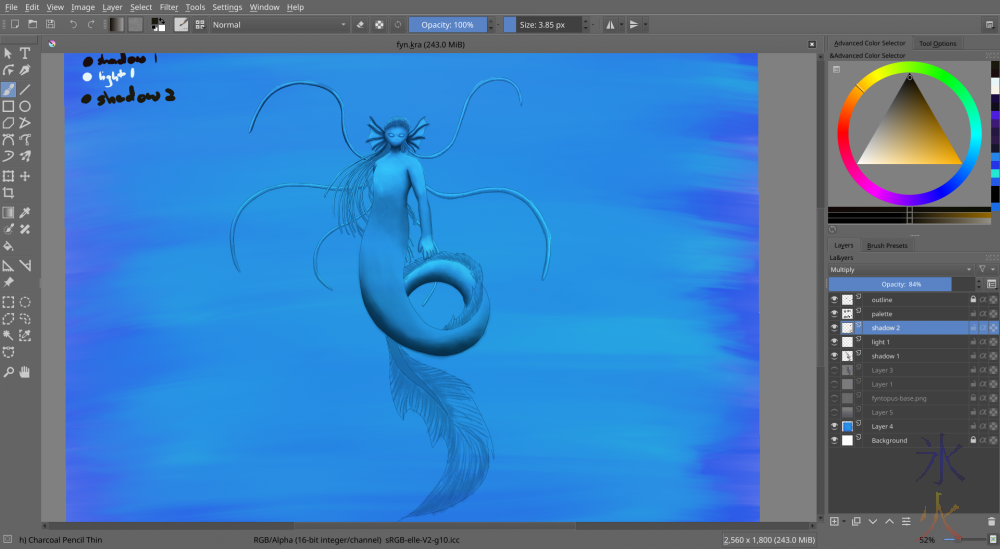 The colour layer is off as the character is quite dark.  I'm hoping to finish it tomorrow and post it the day after the progblog (which is going to be late again because I need to stop staying up so late).

Meanwhile in AER related stuff, after trying really, really hard not to obsess too hard over the animation, I finished the breakdowns well enough for this particular exercise (if it was a final I'd be working a hell of a lot more on it) and decided to try cloth dynamics.

The first attempt resulted in the pants separating from the character and writhing beside her in an angry ball for a little while before flying at the camera like an enraged poltergeist.  Unfortunately the simulation changed when I tried to render it and it decided to fall through the floor instead.  Some research and a few more attempts later I remapped to 60fps as apparently it works better in higher frame rates and ended up with this hilarity.

While much better than the first attempt, still not quite what I wanted XD After a little bit more research, I decided that I was probably going to take just as long rigging and then animating rigged clothes as I was going to fight with cloth dynamics so I'm just going to rig.  Won't look realistic but I'm not doing realistic things anyway.

Definitely upgrading to working in 60fps though, I'm finding 24 a bit limiting as far as keying goes.  I could go to 120 I guess but that requires extra work (taxing my meagre brain even more than it already will be with 60fps timing calculations, and also having to enter it into a custom frame rate text box as Blender UI helpfully provides 60fps as the highest default).

I decided to use the rig I'd made for the head feathers and got up to this point before realising that with the bone chain at max length from the preceding bone I was having a lot of trouble controlling the curve (I'm not even sure why the bones are spaced like that, I think something has gone screwy with the head feather rig) and would have to either add another bone hook or move the existing ones.  I found out I got much better results if I fixed the bone distances from the root bone rather than from each other, but still need to fix the spacing because it's going to do my head in.  I will also have to redo bits I've just done with the head feathers and also I should resize things properly instead of cheating and using bones to resize them as when I have to reset spacing like I did I'm reminded of this, as Zara's head feathers are now way too long. 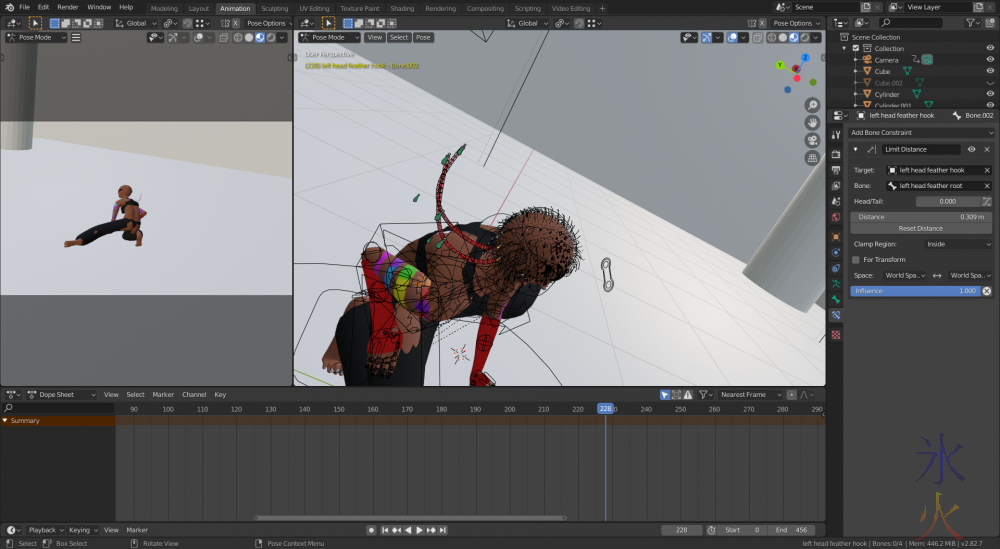 I should also actually start playing with soft body dynamics as apparently curve guides can be animated as soft bodies, and see if that makes animating hair and head feathers easier or harder than straight up rigging.  A potential issue here is that for a lot of the simulation stuff the transforms need to be applied and I suppose I really should do that once I have all the hair guides correctly positioned.  Then I'l have to try and get used to using the 3d cursor as the origin if I need to move the actual objects and that's an unwieldy pain.  Rawr.